Industrial Developments On The Boreal Forest Of Canada

Many industrial developments are causing an increased pressure on the boreal forest of Canada. However, industrial development is an important source of jobs and income for many communities in the nation (Wells). According to the Boreal Songbirds website, the footprint of natural resource extraction industries of the boreal forest already expands over 180 million acres.

It is said that this large footprint is caused directly from forestry, hydropower, mining industries, and oil and gas extraction (Wells). The negative impacts of resource development, such as fragmentation and habitat loss, are magnified by global influences such as climate change, acid rain, and industrial pollution (Lloyd and Daniel 6).

Don’t waste time
Get a verified writer to help you with Industrial Developments On The Boreal Forest Of Canada
Hire writer
$35.80 for a 2-page paper

The boreal forest is one of the planets largest biomes and it spans more than 552 million hectares of Canada. Canada’s boreal forest provides life giving functions such as building soil, filtering water, capturing carbon and producing oxygen (Lloyd and Daniel #). The boreal forest plays a critical role in curbing climate change as it captures and stores twice as much carbon dioxide as tropical forests (Petersen).

According to data from Global Forest Watch Canada, industrial development in Canada has cleared or degraded 775,500 hectares of boreal forest since the year 2000. Additionally, according to Natural resources Canada, only 59% of the boreal forest in Canada is regulated by the government. Thus, indicating that the other 41% of the forest is susceptible to unregulated exploitation and various pressures.

Some of the opportunities to ensure a competitive and sustainable boreal forestry sector include the development of new technologies in harvesting, transportation, processing, and the design of new policies to protect the forest (Bogdanski iii). Policies need to be redesigned so they support not only an economic goal but also maintain a sustainable balance between economic, environmental, and social goals. For instance, more than 30% of the Canadian Boreal Forest has already been accounted for further
industrial development, demonstrating the immense necessity to conserve the forest (Wells).

Forestry has had a large impact on the integrity of the boreal forest. The most common method of tree harvesting in forestry is clearcutting. A clear-cut is an area of forestland where most of the standing trees are logged at the same time and a few trees remain post-harvest (Wells). Forestry companies prefer clear cutting because it is the cheapest and most efficient way to harvest trees (Bogdanski 14). In the span of 18 years, nearly 46 million acres of boreal forest were harvested in Canada to produce products such as lumber, paper, or forage (Wells). Clear cutting is devastating for forest ecosystems. Clear cutting causes global warming, drought, habitat destruction, and a dramatic loss of biodiversity (Pickell). Deforestation is one of leading causes of extinction in the world today (Pickell).

Accordingly, there are now timber harvesting practices in place to protect the boreal forest. Under the sustainable certification, more than 100 million acres of forest are watched and it is ensured that forest products are removed with care in respect to ecological health (Wells).

Additionally, the Canadian Boreal Forest Agreement which was signed in 2010, ensures that 110 million acres are placed into special sustainability management areas and 72 million acres are restricted from operations (Wells). The forestry sector is an extremely important industrial sector in Canada. Approximately 40% of Canada's timber-based forest sector was generated from the boreal forest timber resources in 2004. This equals $41 billion in total revenue per year, directly employing approximately 127 000 people (Bogdanski 14). Unlike forestry, the use of hydropower energy is often seen as an environmentally friendly practice.

Although hydropower is thought to be an environmentally friendly production of energy, the boreal forest in Canada has been tremendously affected by hydroelectric development. According to the Boreal Songbird website, it has been estimated that the construction of hydroelectric plants has affected more than 12.9 million acres of the boreal forest. Hydroelectricity power plants and dams are built in rivers throughout the boreal forest, therefore causing large amounts of terrestrial habitat loss (Brandt et al). In addition to the dams themselves, other infrastructure causing damage to the forest includes permanent, all-weather roads for access and utility corridors required to bring electricity to markets in urbanized areas of North America (Brandt et al). Although the building of hydroelectric plants may be detrimental to the boreal forest, Canada generates approximately 60% of its electricity from these hydroelectric facilities (Bogdanski, 8). Additionally, another important industry for Canada is mining.

Mining has played an important role in the Canadian economy for more than 200 years (Wells). In 2005, the mining industry employed 35,000 people and contributed $17.9 billion to the Canadian economy (Bogdanski 25). Unfortunately, this has had a negative impact on the ecological integrity of the boreal forest considering that eighty percent of mining in Canada occurs in the boreal forest (Lloyd and Daniel). The impacts from mining include the stripping of vegetation and surface soil, leaking of fuels and oils therefore contaminating soil, and mine waste such as rock and ore that leads to acid leaching (Lloyd and Daniel). Canada's boreal forest is host to approximately 7,000 abandoned mines, 72 operating mines and 14 smelters (Lloyd and Daniel). The coupling of the slow recovery rate of the boreal forest and the long-term impacts of mining creates a great concern for Canadians.

Free entry mining systems permit mining anywhere in the boreal forest and gives whomever created the mine rights over the land (Wells). This often causes a conflict with surrounding indigenous communities as mining prevails over Aboriginal land rights (Wells). With little to no regulatory requirements to rehabilitate the impacts of mining, the boreal forest is often left with tailings contaminated with gas, oil, and even radiation from heavy metals (Lloyd and Daniel). The generation and management of mine waste is such a significant part of a mining operation that the mining industry is considered a waste management industry (Lloyd and Daniel). The oil and gas industry also has had an immense impact on the boreal forest.

Provinces such as Alberta and Saskatchewan have been impacted greatly by the extraction of bitumen. According to the Boreal Songbird website, “Oil sands activity has already directly impacted 175,000 acres of Alberta's boreal forest, and more than 66% of the 34 million acre region has been leased to companies for extraction.” Disturbances to the forest include linear clearings of trees and vegetation down to the soil in order to collect seismic data, and also
tailings ponds that are a result of accumulations of byproducts of bitumen extraction (Pickell).

With the continued acceleration of the tar sands development in Canada, direct forest loss is projected to exceed 1,150,000 hectares over the next few decades (Petersen). Canadas economic prosperity is a function of the wealth of the natural resources that are harbored within the nation. More than 20 percent of the boreal forest region, which is more than 150 million hectares, is now covered by industrial concessions for timber operations, hydrocarbon development, hydroelectric power reservoirs, and mineral extraction such as mining (Brandt et al). The sale of oil and gas to markets worldwide and the taxation of the firms that produce it contribute significantly to Alberta's GDP (Brandt et al). However, the wealth created by the exploration and development of resources in Canada should not overshadow the economic and ecological importance of the forest that is cleared to access these resources (Brandt et al).
From a financial point of view, the economics of planting new forests in Canada's boreal forest are on average very poor because of the slow growth of these forests and the high cost of planting (Bogdanski 26). Costs of environmental protection are another factor that may affect future sustainability and growth of the boreal forest sector. The most notable increases have been for environmental assessments and audits, environmental monitoring, reclamation and
decommissioning, and wildlife and habitat protection (Bogdanski 19). The presence of non-use values of the forest often means the economic value of standing forest may be greater than the economic value of the flow of products harvested from the forest (Bogdanski 26).

In summarization, the boreal forest of Canada is a very valuable source that has been exploited for economic prosperity in the industrial sectors of forestry, hydropower, mining, and oil and gas. The industrial developments in Canada are extremely important as they lead to the employment of many citizens and also leads to much of the nation's economic wealth. It is suggested that further research be done in regard to integrated land use management of the boreal
forest in the industrial sectors of forestry, mining, agriculture, recreation, and oil and gas. This research will improve understanding of environmental value of all boreal resources to the boreal region and to the Canadian economy leading to better sustainability of the boreal forest region in Canada.

Industrial Developments On The Boreal Forest Of Canada. (2021, Oct 31). Retrieved from http://envrexperts.com/free-essays/essay-about-industrial-developments-boreal-forest-canada 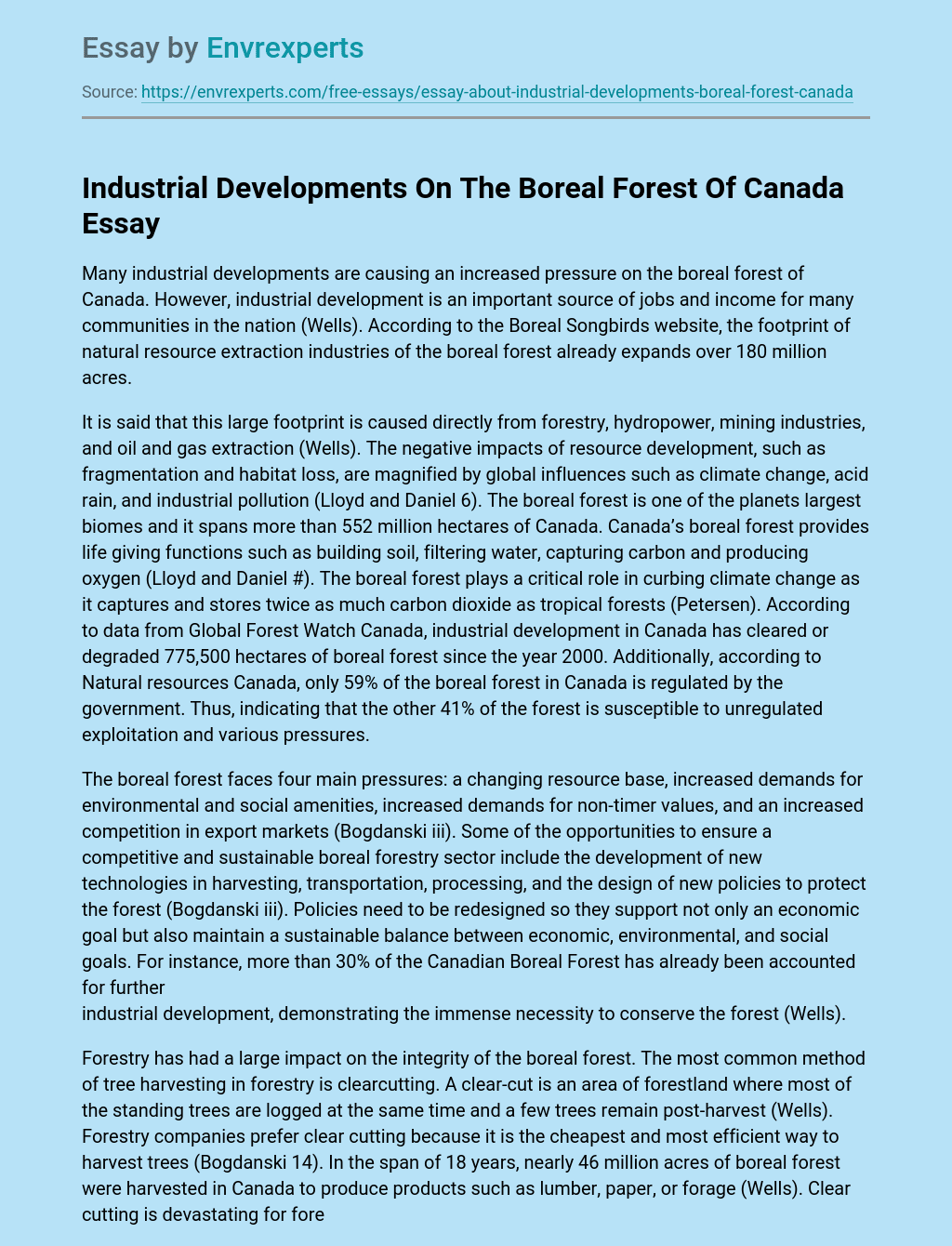