During the last twenty years, industrial livestock farms have been replacing the traditional family size farms that once raised most of the nation's swine. The number of livestock animals produced in the United States has grown modestly in the past two decades, but the number of farms raising them has slunk dramatically because large producer now dominate the market. The large increase in industry farming has led to large quantities of manure.

The over abundance of manure has become a problem that leads to problem with Pollution, heated debates between the industries and societies (people of the community), ways to try and find solutions for the pollution.

Don’t waste time
Get a verified writer to help you with Industrial Livestock Farms in Replacing the Traditional Family Size Farms
Hire writer
$35.80 for a 2-page paper

Today, large live stock operations look more like animal factories than animal Farms. The farms usually consist of several metal barns, each containing several hundred to several thousand animals tightly confined. The floors in the barns are slatted so manure can be flushed away. The manure is pumped into open-air lagoons, which are large, shallow pits dug into the ground, where it is stored until it can be pumped out irrigate fields.

The solid manure sinks to the bottom of the lagoons and is broken down by anaerobic bacteria over several months. The liquid rises to the top and is collected and sprayed over nearby fields. Many problems come with lagoons

North Carolina is one of the top hog producing states in the country. On June 21, 1995, North Carolina suffered the largest agricultural waste spill in its history: a 7.

5-acre, 12-foot-deep lagoon leaked 25 million gallons of hog waste into the headwaters of the New river near Richmond's. The waste from the 10,000-head operation, owned by Ocean view Farms, contaminated the water for several miles downstream, increasing the levels of nitrogen, phosphorus, and other nutrients. When nutrient levels increase dramatically in rivers and other bodies of water, algae grow furiously, consuming most of he dissolved oxygen and asphyxiating the other acquantic organisms living there. An estimated 5,000 fish died as a result of the Ocean View Farms spill. There have been six other waste lagoon spills in North Carolina and three in Iowa, which shows that this was not an isolated occurrence. Downstream of the spill, the New River also high focal coliform bacteria counts. Fecal pathogens that can be transmitted from livestock to people include enteric bacteria such as salmonella and ahigella, and protozoa such as cryptosporidium and giardia. People could be exposed to these pathogens by fishing or swimming in contaminated waters or by eating shellfish, which are filter feeders and can concentrate pathogens. When investigating the Ocean View Farms hog waste spill into the New River, North Carolina, DEM (Department of Environment Management) official found that the lagoon had not been operated properly. AN irrigation pipe had been bored through the lagoon's earthen wall, which weakened it. The truck-sized hole through which the waste spilled was near the pipe. Also, the lagoon had been overfilled. In response to the series of livestock waste spills, North Carolina Governor James Hunt ordered the DEM to investigate the lagoons on the state's largest hog operations. The investigators found 109 operations that were discharging hog waste directly into streams and rivers, 124 lagoons that were so full that they were likely to overflow or burst, and 526 that were nearing the critical point of fullness. Although spills focus attention on the hazards of livestock waste, the greatest threats are chronic seepage from lagoons and runoff from the fields where the lagoon liquids are sprayed. Some waste lagoons are lined with compacted clay or plastic, but most are not. The main route of contamination is through the soil. It migrates into nearby streams and aquifers. The contamination can increase the level of nitrates in groundwater and can cause methemoglobinemia or "blue baby syndrome." This rare but potentially fatal disease causes intestinal bacteria to metabolize the nitrates to nitrites, which oxidize the iron in hemoglobin, making it incapable of binding oxygen. Babies that are less than six months old are particularly susceptible to this syndrome because their digestive tracts are less acidic than those of adults. In North Carolina, the water table is only 15-20 feet below the surface of the soil and 25 percent of the lagoons dip below the water table, so groundwater contamination is one of the greatest concerns. In 1994, Doctor Maolin Zheng of Clemson University's Department of Agricultural Engineering studied 36 hog waste lagoons and found that 65 percent of them leaked into the groundwater. Another source of water contamination is runoff from the fields where livestock waste is applied. Over spraying fields with liquid animal waste can lead to excessive odor and to runoff in nearby streams. Too much spray also leads to drift through the air, which carries odor.

As is the case with almost any public issue, the economics contributions and burdens of concerned industries must be considered. The problem here is a complicated one. The swine, dairy and poultry industries contribute much to North Carolina and its citizens in the way of employment, tax revenue and subsidiary industries. On the other hand, these industries can have negative economic impacts on the state by decreasing revenue from other sources, such as real estate sales, commercial and sport fishing, and tourism.

Agriculture is the largest industry in North Carolina, and swine, poultry and dairy farming make up about 50 percent of total farming receipts. Poultry and eggs comprise 30 percent; swine makes up 15 percent, and dairy farming 3 percent. This adds significant amounts to the tax base in many otherwise impoverished counties.

These industries also contribute employment to the people in these counties. It is estimated that the hog industry directly and indirectly contributed 32,500 jobs in 1994. Much of this employment comes in industry indirectly related to farming. These businesses include food processing, containment house manufacture and construction, equipment manufacture and maintenance, and feed milling, among others.

In eastern North Carolina, tourism is the largest economic sector, generating $387 million tax revenue in 1994. Recently, this industry has had to increase advertising to counteract the decrease in tourism in response to last summer's lagoon spills. It is estimated that these spill created a loss of recreation benefits. Several of the coastal fishing areas were forced to close due to effects from increased river nutrients. Also, real estate values can be affected by highdensity farming. If the residents near a farm can perceive an unpleasant odor, the value of their land may be reduced.

Besides disagreeing about the level and extent of regulatory reform, people disagree about the level of technology that is necessary to treat livestock waste safely. Some say that when used properly, current waste treatment methods are adequate. Others say that livestock operators need to adopt new waste treatment technologies. The Sierra Club's Holman would like livestock operations to use more advanced treatments such as those used for human waste, but, he says, the animal industry says they are too expensive (America's Animal Factories). Two growing-finishing trials involving 432 gilts were used to determine the potential of reducing nitrogen excretion while maintaining swine performance and carcass merit. This was done by substituting a portion of the soybean meal by synthetic amino acids. The study suggests that decreasing dietary crude protein and thus total nitrogen by decreasing soybean meal and using synthetic amino acids has the potential to substantially reduce nitrogen excretion.

The study also demonstrated that it is possible to obtain similar rate of gain, feed efficiency and carcass merit when substituting synthetic amino acids for a portion of the soybean meal in diets for growing-finishing swine. Unfortunately, lysine is the only synthetic amino acid that is currently priced to be feasible to use in swine rations.

North Carolina regulators are paying more attention to livestock waste now. On October 1, 1995, Senate Bill 1080 went into effect. This law imposed mandatory statewide setback requirements on all new or expanded factory hog farms, raising 250 or more hogs. Under the senate bill 1080, all new hog houses and waste lagoons must be at least 1,500 feet from any occupied residence, 2,500 feet from schools, hospitals, and churches and 100 feet from any property boundary. Spray fields must be at least 50 feet from any residential property boundary and from any perennial stream or river, other than an irrigation ditch or canal. In 1996, Senate Bill 1217 was passed for more regulation hog farms. The law directed the state to develop a system of general "nondischarge permits" for animal operations above certain size thresholds. Factory hog farms with 250 or more hogs are required to obtain a general permit. The law requires that each regulated livestock operation be inspected two times each year and it extended the setback applicable to new or expanded hog house and lagoons from 100 feet to at least 500 feet from any property boundary. It also increased the amount the state can fine factory livestock operations for a first time offense of willfully discharging waste into state waters, from $5,000 to $10,000 and the law also requires that any person who intends to build a new hog farm must provide written notice of such intent to adjacent landowners and any property owners who own property across a public road, street or highway from the proposed hog farm. The 1997 House Bill 515, imposed a partial moratorium on new and expanded factory hog farms, directed the state to develop a plan to phase out anaerobic waste lagoons and spray fields, and imposed additional requirements.

The 1998 House Bill 1480 extended the moratorium on new and expanded factory hog farms by six months and required contract hog growers to provide information to the state regarding the swine operation integrator with whom that farmer has a relationship.

First, the state of North Carolina can require livestock operators to implement controls to minimize the loss of nutrients from waste application sites to surface and ground water." Nutrient Management practices modify the use of fertilizer or animal waste based on recommendations regarding optimum rates, timing, and methods for nutrient application. These practices address: the control of nutrient loss through application to cropped fields, and the maintenance of field productivity through limits on lifetime of nutrients. These recommendations are typically base on soil and manure analysis and expected crop yields.

Second, the major operators need changes in farm design and operation. Because animal lagoon spills have the potential to harm human and environmental health, it is in the public's best interest to prevent spills from occurring. Prevention is generally less costly than clean up. Although external factors, such as heavy rainfall, can play a part, lagoon spills are often due to human error or equipment failure. Changes in farm construction and operating practices have the potential to reduce the number of spills.

Third, the state needs to improve regulatory efficiency. The permitted program is inefficient because it does not take into account the variations among farms and does not provide proper mechanism for enforcement. It should be replaced by a new permitting program that will enable the state to implement environmental standards and increase industry compliance. 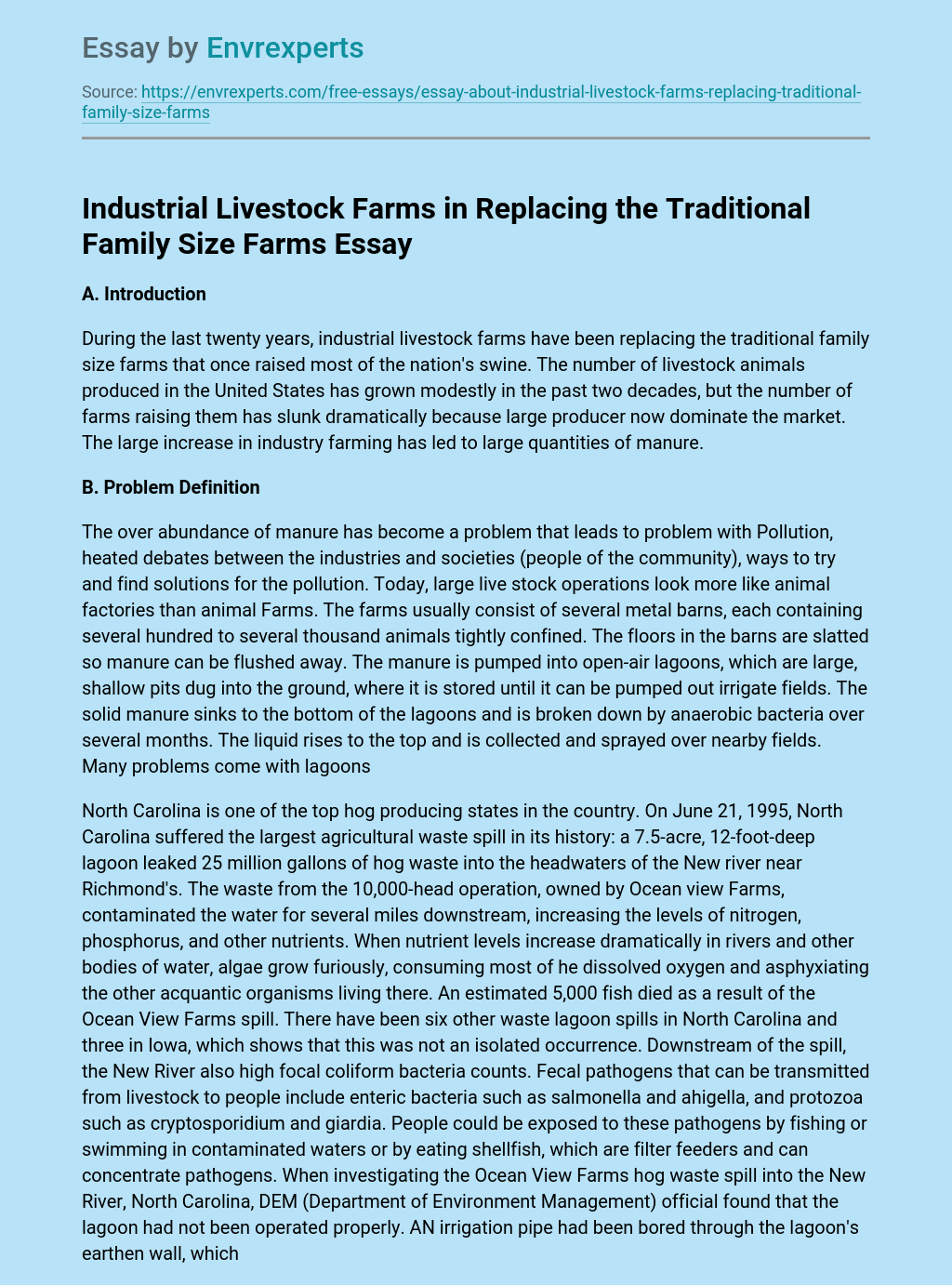