The Influence of Climate on Human Conflict

The research article: Quantifying the Influence of Climate on Human Conflict took the belief that interactions between individuals and groups sometimes lead to conflict and the debate in which climate change is responsible. Hsiang, Burke, and Miguel carried out a series on syntheses of literature on climate change and human conflict. The trio examined the types of human conflict and studies “natural experiments” to exploit changes and variations in climate as time has progressed that may have also affected conflict.

Don’t waste time
Get a verified writer to help you with The Influence of Climate on Human Conflict
Hire writer
$35.80 for a 2-page paper

Overall, the group “collected findings across time periods spanning 10,000 BCE to the present and across all major world regions."

In the end, the group found the results that "each 1-SD change in climate toward warmer temperatures or more extreme rainfall increases the frequency of interpersonal violence by 4% and intergroup conflict by 24% (median estimates).” The group concluded that there was more agreement in the regard that there has been an influence of climate on human conflict than was recognized before.

According to the researchers, in recent years, there has been a growing recognition that the climate is changing. In addition to this, there have been improvements in the data quality that prompted an explosion of quantitative analyses. The analyses were sought to test the proposed theories and give merit to the strength of any previous linkages. In the end, the work remained scattered across different fields and began to interest a plethora of different research teams. Collectively, the primary studies obtained analyze 45 different conflict data sets that have been published in 26 different journals.

As far as future research is concerned,” to date, no study has been able to conclusively pin down the full set of casual mechanisms, although some studies find suggestive evidence that a particular pathway contributes to the observed association in a particular context. The group concluded that findings from a growing pool of data and research have suggested that past climatic events have had an influence on human conflict. The group believes that particular research must be achieved and that policies and institutions can be built if we understand why conflicts arise, and that “the success of such institutions will be increasingly important in the coming decades, as changes in climatic conditions amplify the risk of human conflicts."

The Influence of Climate on Human Conflict. (2021, Oct 31). Retrieved from http://envrexperts.com/free-essays/essay-about-influence-climate-human-conflict 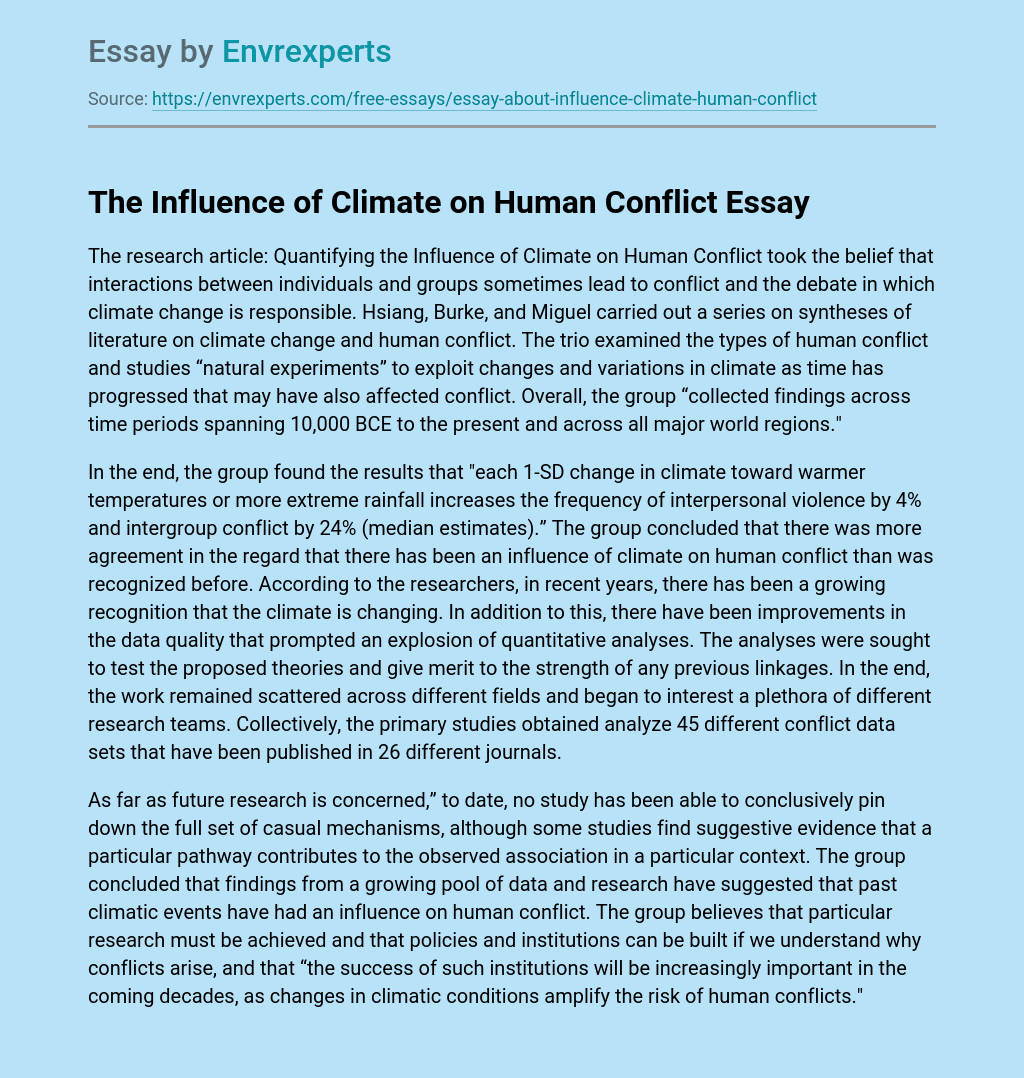