Interview With A Proponent Of Global Warming Theory

There is little doubt that the air's carbon dioxide concentrations have been increasing since the Industrial Revolution and there are few who do not attribute this increase to the rise in humanity's use of fossil fuels. There is also little dispute that the earth has warmed slightly over the same period. During our interview Adam told me that he believes strongly in the dangers of global warming and feels great animosity towards critics of this theory.

Don’t waste time
Get a verified writer to help you with Interview With A Proponent Of Global Warming Theory
Hire writer
$35.80 for a 2-page paper

Our conversation had an angry tone as Adam explained his hostility towards those who "say that there is no compelling reason to believe that the rise in temperature is caused by the rise in carbon dioxide." I spent the entirety of the interview trying to explore why Adam exhibited such strong resentment towards global warming's critics and why he felt so passionately about this topic.

I first asked Adam to tell me his definition of global warming and how he believed it is caused.

He explained that he had been learning about global warming in school since first grade and continued to talk about these issues in collage classes. Therefore, he felt knowledgeable about the topic. The earth's climate, he said, is changing because human activities are altering the chemical composition of the atmosphere through the buildup of greenhouse gases, primarily carbon dioxide. The heattrapping property of this gas is undisputed. Energy burned to run cars and trucks, heat homes and businesses, and power factories are some factors responsible for the increased concentration of carbon dioxide.

"Human beings are causing the release of carbon dioxide and other greenhouse gases to the atmosphere at rates much faster than the earth can cycle them," Adam explained. Too great a concentration of greenhouse gases can have dramatic effects on climate and significant repercussions on the world around us. Rising global temperatures, he explained, are expected to raise sea levels and could alter forests, crop yields and water supply.

I was surprised at how knowledgeable Adam was on the topic. While I also believe that global warming is a potential danger and disregard skeptics theories, my understanding of the topic is not as extensive as his. Adam and I went to the same high school and lived in the same town, so what set us apart?

This question was answered when Adam told me about the three years he lived in Pakistan between the ages of nine and twelve. It seemed to me that his village in Pakistan was more comparable to the horticulturist society of the Ifaluk and Miskito in their relationship to the natural environment than most towns in the United States. "We were much more in tune with nature," Adam explained, “because we were dependent on our land and the food that we grew on it to live.” Just like the Ifaluk, Adam's family was forced to exercise environmental control by engaging in practices that would not alter their surroundings. I thought about how in the United States we often overlook such habits because it is so easy for us to get food from grocery stores and restaurants. The environmental impact of industrialism is often not visible, and so many of us overlook or ignore the damage it creates because it does not directly affect our daily lives. The danger of disregarding the impact our actions have on nature is evident when looking at the Miskito. Extensive trade with England and France resulted in the Miskito exploiting their resources, and as a result the turtles that they depended on for their livelihood are now an endangered species. The consequences they are now paying because they neglected to engage in an adaptive and reproducible relationship with their environment should be a lesson to the United States of the danger we face in the future.

Adam told me that because of the time that he spent in Pakistan and the importance he learned to place on his land there, he was always very interested in the sciences. "Classes that explained the mysteries of nature fascinated me," Adam explained. Therefore, topics such as global warming were very important to Adam and he took what he learned seriously. Through his scientific studies Adam gained a strong belief in the correlation between the increase of carbon dioxide and the rising temperatures that have resulted.

When I asked Adam why he believed many people were skeptical of a concept he found so palpable ! was surprised by his answer. "It is human nature to protect your own interest," he replied. Energy from coal, gas and oil make the processes that sustain the high standard of living with which much of today's society believes they are entitled to possible. People fail to think about the "future well-being" of our planet that is being sacrificed from our actions, Adam explained. I agreed, believing that this attitude is a direct result of the industrial and consumer culture that we live in today. In a society where people are obsessed with finding happiness through material objects, many are willing to sacrifice anything to get possessions that they desire. With attitudes like this, environment consequences are often ignored.

I was interested to see what other social issues Adam believed played into the conflict surrounding the validity of global warming. He was eager to talk about where he thought politicians stood on the topic. Many companies, in Adam's opinion, stand to lose tremendous amounts of money if the truth about global warming becomes accepted by American society. Therefore, industries attempt to hide and discredit the link between carbon dioxide emissions and the warming of the earth. I was surprised to hear that he believed companies fund greenhouse skeptics to proclaim that global warming is a myth. There is, for the most part, a scientific consensus that human action is causing a warming of the earth. Scientists who have this view recognize, nonetheless, that there is uncertainty as to the specific outcome of the warming. Society often chooses to focus on the word "uncertainty" in articles and media campaigns believing that as long as we are irresolute regarding the dangers of global warming we do not have to change our way of life. What Adam believes to be the problem is that many members of the U.S. Congress buy into these claims. The degree to which the greenhouse skeptics and their organizations have "succeeded in blurring the facts about global warming" is evident when we listen to many congressmen talk about the issue, Adam explained. I was amazed at this educated response from my interviewee. The fervor and immense amount of knowledge on the topic that Adam displayed was amazing to me. It scared Adam, as it did me, that even politicians so readily discount scientific evidence.

Adam went on to say that "the carbon dioxide we emit today will probably affect the climate well into our children's future and likely into the future of our grandchildren." Despite the widespread recognition of this fact, worldwide emissions of fossil fuels continue to increase every year. Emissions will increase even further as the developing world moves towards greater industrialization. At the conclusion of our interview I began to understand and share with Adam the feeling of anger he exhibited towards skeptics of global warming that had at first puzzled me. It seems as if extensive efforts are being made to discredit scientific evidence not because proponents of the theory actually believe there is no correlation between the rise in temperature and carbon dioxide but rather because society is afraid they may be forced to sacrifice their standard of living.

Interview With A Proponent Of Global Warming Theory. (2021, Oct 31). Retrieved from http://envrexperts.com/free-essays/essay-about-interview-proponent-global-warming-theory 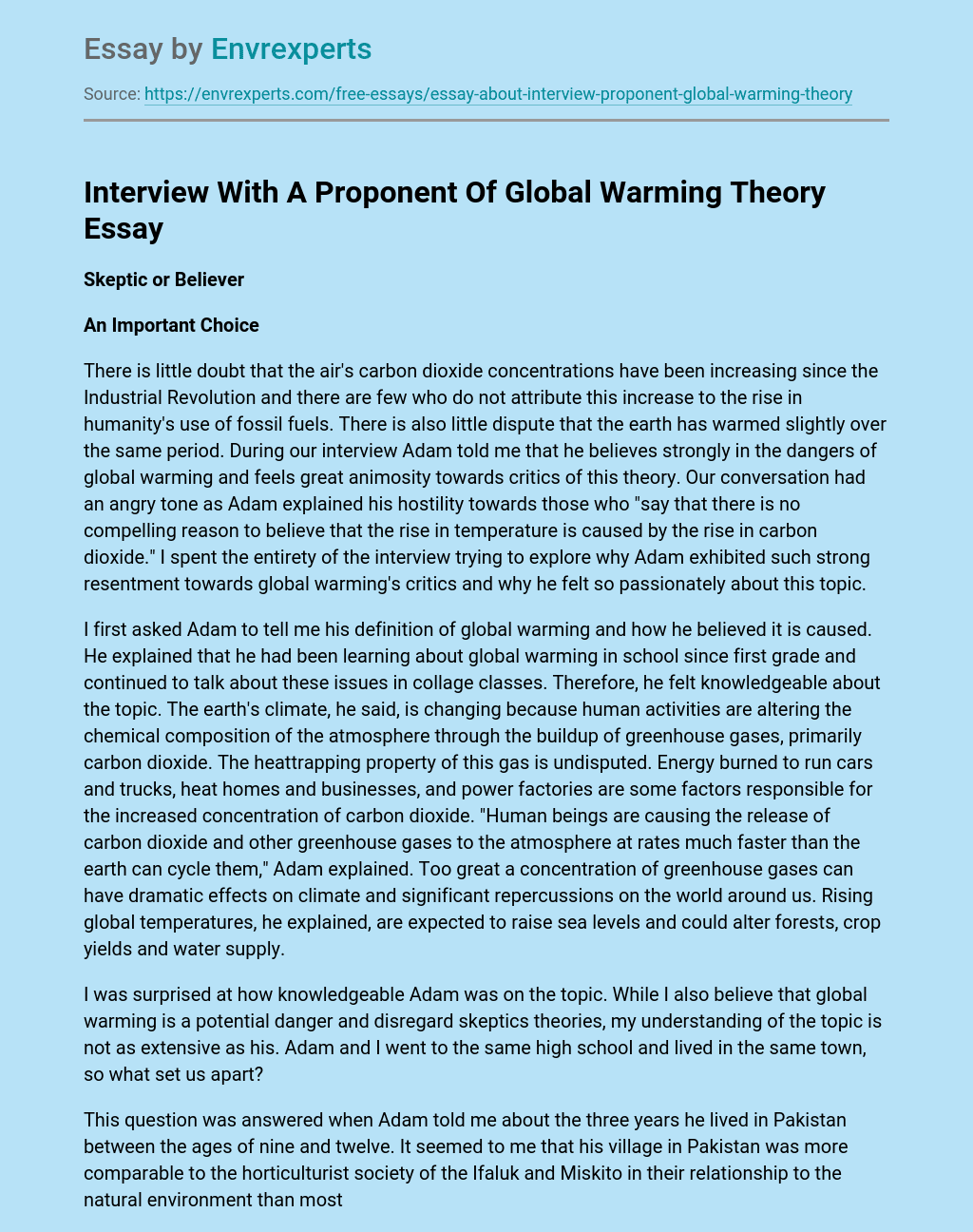