An Introduction to Civilian Conservation Corps

During the 1930s the economic situation of the untied states was very bad. The nation was in severe debt and there was no really plan on getting out of it. Unemployment was running rampant and in the inner cities most people had no means of supporting their families. There was another huge problem that was plaguing the country, soil erosion and lack of timber was a big environmental issue. In 1932 Franklin Delano Roosevelt was voted in as president of the United States and right away started to eat away at unemployment and the environmental issues by bringing them together.

Don’t waste time
Get a verified writer to help you with An Introduction to Civilian Conservation Corps
Hire writer
$35.80 for a 2-page paper

FDRs plan was to put thousands of unemployed young men in to Corps that would focus on helping the environment. By employing these young men they would have a steady income of $30.00 a month ($25.00 would be sent home to family members) and at the some time the Government would have a cheap was to help countryside. This plan helped young men support their families in a time of great finacial unrest but in the same turn it would help the Enviroment.

There were many dams, parks, and environmentally helpful structures that CCC workers built in Vermont, many of which are still around today. The CCC helped built the Waterbury Dam after the flood of 1938.

1: The CCC was just one of the many parts of the New Deal, that was a series of steps that would eventually pull the Untied States out of debt while helping out families. The CCC was by far the most popular act in the New Deal, even polititions that adamantly oppesed the New Deal as a whole gave FDR enourmous credit for the formation of the CCC.

2: While the new jobs helped young men and families it also went much further in its finacial aide. Local country stores and other small business that survived from day to day had a enoumous rise in sales wherever CCC camps were stationed. In most of these areas it wouldnt be uncommon for stores to have a $5,000 increase in sales each month.*

It wasnt that the companies didnt want to pay their workers but the owners were also going through the depression and had to support their families. The reason that the great deppresion started was the over confidence of stock brokers in the stock market, after the market crashed many companies went out of buisssness and those that didnt were seriously crippled. Many of those remaining companies had so drastically cut back on most of the lower level employees and pay those reamaning people much less money. So as you can see the depression hurt more that just ordinary citizens, it also affected major buissness owners. What the CCC did was employ young and unmarried men but It also put out a large demand for outdoor equipment and large landscaping equiptment. Local small business also saw a huge increase in their sales, workers were in constant need of clothes, tools, toiletries and other such things that needed to be replenished on a regular basis.

President Roosevelt knew that many people oppesed his plan but in the end he also knew that it would help the country. This new deal would in addition to helping the country with its decling agricultural stature it would also help many companies come out of debt with out adding to the countries national debt which was an increasing problem back then. Roosevelts plan for decreasing the national debt was deffrent that most in the past because he didnt propose to rasie taxes (mainly because people didnt have the money) and any other money stripping things that could help the country but in ther long run it would hurt the people. He decided to insitute a series of programs that would help unemployed people to work, the work woudnt pay much but slowly it would help them out of debt.

I was fortunate to have a family member that had some personal experience with the C.C.C. and their inner workings. My grandfather, Jack Andrews was a member of the Civillian Conservation Corps from the winter of 1938 to the summer of 1939. He was stationed in Idaho neat Idaho falls, but he only took the minimum 6 month enrolement in order to save up for college. As I have already stated 5 of the 30 dollars were to be sent home or put into a savings account for school or higher education. He was stationed at a forestry camp where there were many different tasks ranging from widening roads to support more transportation to dynamiting rocks. My grandfather started his journey by going to his local post office in Ohio and enrolling. Next he was shipped to Fort Knox by train to begin his brief by comprehensive training to be a CCC member. After the training he was shipped to his staton in Idaho where he was assigned a bunk and a company. The CCC was organized much like the Military in many aspects, such as uniforms, slepping and eating areas and work schedule. All members were given a uniform that was excpected to be kept in good condition and always be tucked in. The sleeping quarters were set up in 6 barracks what held about 34 people, the barracks were inspected every morning and beds were expeted to be tucked in and neat. My grandfather said that the meals were good and always nice and hot, breakfast and Dinner were held in a mess hall and all members were required to have some K.P. (kitchen police) duty. Lunch was brought out to the work site but this may not have happened at ever station. The work day usually started around 7:00 or 7:30 a.m. andwent to about 3:00 p.m.

The temperature at his station ranged from 30 to about 90 degrees and many layers were usually shed during the work day. At every station there was a Captian and many other lower officials that monitored work and projects. Local Civillians could become work site organizers, there were about 12 at ever station and there duties raged from finding work to making sure projects were done right. During the weekends corps members were able to go to small towns that were close to the Station, members had 5 dollars to spend which was usually enough to buy some extras. Most men purchased alcholol with their pay but getting drunk was frowned apon by company leaders. My grandfather and some of his company mates would usually hitch a train and ride empty boxcars up to Montana during the weekends and hitch hike back to work on suday. There was opportunity for eduction while you were stationed in the CCC, my grandfather earned 6 college course during his 6 month stay. At most post there was a library where members could go and check out books, for most of the enrollees this is the first access to a large number of up to date books. There wasnt much racial diversity in my grandfathers statin but most of the enrollees were poor, uneducated and this was the first time they had an opportunity to leave their town and he could tell that most of the people realized this beacse most people were very happy with their situation. Almost all of the members families depened on the $25 that was sent home each month and couldnt have a good living standard with out it. Most of the emrolees signed up for more than the minimum 6 month period. My grandfather said that this may have been one of the most infueltial times of his life because it gave his structre and a sense of meaning where he hadnt had any before.

The CCC had companies stationed all over the country but mainly concentrated in the west and mid-west, however there were a few companies stationed in the east. Vermont had a total of 28 companies and 5,300 enrollees. The camps were located at such places at Waterbury Dam ( a.k.a. little river state park), the East Barre Dam, and construction of many fire patrole towers. The Waterbury Dam was built in 1938 as with help from the Army Corps of Engineers as a result of the 1927 flood, which destroyed the previous structure.

An Introduction to Civilian Conservation Corps. (2021, Oct 31). Retrieved from http://envrexperts.com/free-essays/essay-about-introduction-civilian-conservation-corps 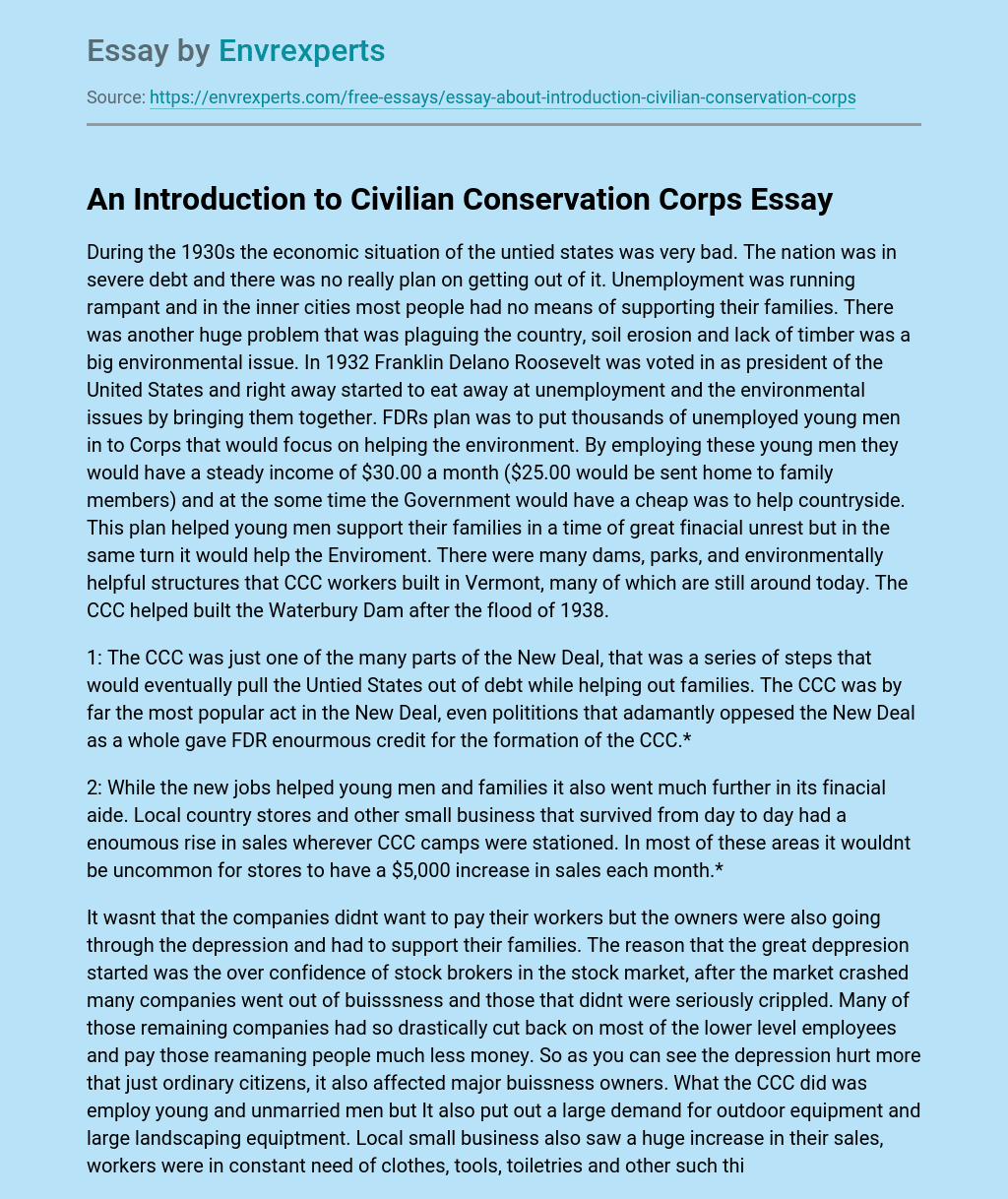