An Introduction to the Concept of Sustainable Development

The concept of sustainable development is an attempt to balance two moral demands placed on the environment. The first demand is for development, including economic development or growth. It arises mainly from the interests of people who live in developing countries. Their present poverty gives them a low quality of life and calls urgently for steps to improve their quality of life. The second demand is for sustainability, for ensuring that we do not risk the future in the sake of gains in the present.

Don’t waste time
Get a verified writer to help you with An Introduction to the Concept of Sustainable Development
Hire writer
$35.80 for a 2-page paper

This arises from the interests of people in the future who will need access to a reasonable quality of life, non-renewable resources, unspoiled wilderness, and a healthy biosphere. These two moral demands do conflict. In fact, economic growth is the prime source of threats to the natural environment.

We have a rough sense of what a good quality of life for humans consists of. Also, we can make some rough judgments about when a person's quality of life has increased or decreased.

Utilitarianism about future generations says that people should weigh these increases impartially with respect to times. And, in particular, should not prefer a smaller increase in the present well-being to larger increases in the future. We should try to maximize the sum of increases in well-being across times counting future lives equally against those in the present. Our moral goal should always be to produce the greatest total of such gains, no matter by whom they are enjoyed.

Utilitarianism has been extensively discussed by philosophers, and many objections have been raised against it.

Two objections are especially relevant here. First, utilitarianism is an extremely, even excessively demanding moral view for most humans. If we have a duty always to bring about the best outcome, than any time we can increase the well-being of others (which is just about at any time), we have a moral duty to do so. There is no moral time off, no moral relaxation, nor is there a moral holiday. Humans are always duty bound to sacrificing something for the benefit of others at a given time. Second, utilitarianism can favor unequal distributions of wellbeing. In particular, it can impose severe deprivations on the few for the sake of gains for the many. Given its interpretations of impartiality, utilitarianism will count the deprivations of the few as a moral cost. But, if they produce benefits for enough people, this cost will be outweighed. Even a severe inequality can be balanced out and approved of by a utilitarian.

Some philosophers, feeling the force of these objections, have proposed replacing utilitarianism about future generations with an egalitarian view. This view cares not just about the sum of benefits across generations, but also about their equitable distribution. We do not sacrifice the worst-off generation for better-off generations, but aim at equality of conditions among them. This egalitarian view can take many forms, but a good version has been proposed by Brian Barry. He says that each generation has a duty to pass on to its successors a total range of resources and opportunities that is at least as good as its own.[1] Those generations that enjoy favorable conditions of life must pass on similar circumstances of life to their future. However, generations that are less fortunate have no such stringent obligations. What is required of each generation is that it just pass on a total package of opportunities that is comparable to its own; whatever the exact composition of that package may be. Barry's approach to the egalitarian view can easily be interpreted as an ethic of outcomes. Assuming this interpretation, is the egalitarian view the best of our duty concerning future generations? There seems to be one major objection against Berry's view.

Brian Barry's egalitarian view does not place excessive demands on early generations to make sacrifices for the sake of later generations. That is because it places no such demands-early generations need do nothing at all for later generations. Surely early generations have some duty to enable their successors to live better than themselves. An ideal of sustainability, or of a constant level of well-being through time, may be attractive to think of when starting from a high level of well-being. But, it is not so attractive when starting from a low level of well-being. There is nothing inspiring about a consistently maintained level of misery. Yet Barry's view allows consistent misery to persist. It finds nothing objectionable in a sequence where the first generation passes on a very limited range of opportunities and resources to the next generation, and so on. Surely this sequence of events is objectionable. There may not be as stringent a duty to improve conditions for future generations as utilitarianism claims, but there must be some such duty that exists.

And if people followed Barry's egalitarian view, then future generations may be stuck in the same rut as past generations. That is why a middle-road must be used. By taking these two ideas, then we can see that each generation should pass on to its successors a range of opportunities that allows for a reasonable quality of life. However, it should not be seen as a duty. If it is seen as a duty, then most humans may be turned off by the prospect of taking care of their environment for future generations. If it is seen by humans that our environment is a precious jewel, then we will more than likely want to share it with our future generations.

An Introduction to the Concept of Sustainable Development. (2021, Oct 31). Retrieved from http://envrexperts.com/free-essays/essay-about-introduction-concept-sustainable-development 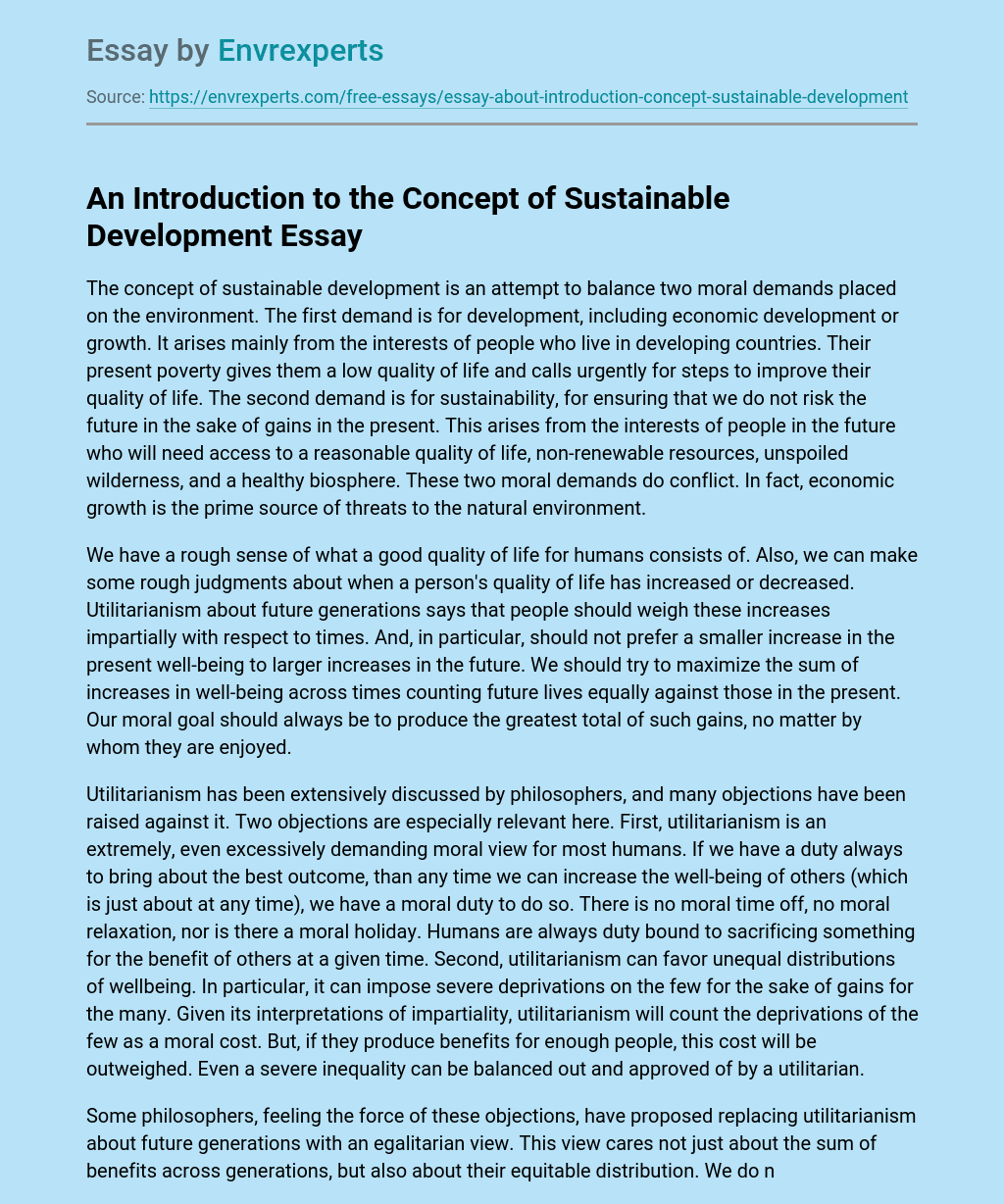