An Introduction to Sources of Energy

Energy runs everything in our lives; our cars, our homes, even our own bodies run off a form of energy. Where we obtain the energy to fuel what we need to survive is extremely important. With the threat of fossil fuel reserves diminishing and concerns about pollution rising, alternative energies are becoming more prevalent. With technology constantly finding new ways to utilize resources in novel ways, alternative energies may one day be able to make up the majority of the majority of the usage in America; if not the world.

Don’t waste time
Get a verified writer to help you with An Introduction to Sources of Energy
Hire writer
$35.80 for a 2-page paper

Energies such as wind, solar, and tidal could be crucial in breaking our dependence on fossil fuels, or at least lessen our need.

Wind energy is becoming more and more popular in countries in Europe. Alex K. Rich and David C. Morley argue that wind is one of the fastest growing alternative energies stating, “The world's wind-generating capacity is currently growing by 29 percent a year, compared with a 1.7 growth rate for oil, a 2.

3 percent growth rate for coal, and a 1.9 percent growth rate for nuclear power.” Wind power uses the kinetic energy generated by the movement of air in the atmosphere to spin turbines on a windmill. The turbines convert this Kinect energy into electric energy that can be used for conventional uses. Wind power is not a recent development in the least bit. Wind had been used for centuries to power windmills to churn grain or other farming uses. Wind is a great source of energy because it is wholly renewable.

Wind is a natural part of the environment and is not used up like fossil fuels. As stated before, wind has become more popular in Europe. In fact, “By 2020, wind energy is expected to provide for half of Europe's energy needs.” (Rich & Morley, 2011). Though America seems late to the party when it comes to wind energy, it is not because the potential is not there, “According to a study conducted by the Department of Energy, the states of North Dakota, Kansas, and Texas alone receive enough wind to provide electricity for the entire nation."[Ric11] One argument against wind energy is the cost of establishing the wind turbines. That said, “Although wind turbines are expensive to produce and install, they require very little maintenance, and could potentially produce electricity for as little as $.02 per kilowatt-hour, making them an affordable option in the long run”[Ric11]. Though wind energy is clean, renewable, and can be very affordable, there are some downsides. The wind is not always blowing and producing energy. Also wind turbines could threaten certain migrant birds. Wind is better suited as a supplementary source of energy than a primary one.

Solar energy, like wind, is a renewable and clean energy. The sun is a constant source of energy for the Earth. The sun is not going to disappear anytime soon; for if it did life as we know it on Earth would end. There are multiple ways to harvest solar energy. To simplify it, solar energy is harvested using panels covered in electronic cells. The heat and energy from the sun's rays is converted in these cells to usable electricity. Solar energy, like wind, has become very popular as a supplemental energy source due to technological advancements making solar more efficient. The energy used to produce and maintain them is now outweighed by the amount of energy they can produce. Patrick Berry found, “These improvements in efficiency mean that today's solar panels can "pay back" in only 1 to 3 years the energy needed to make them, the study concludes.” This makes solar panels great for smaller projects because they become a good investment in time. One major benefit of solar is they release no pollution. Some argue that the energy used to create these panels may produce enough pollution to offset this benefit; but, “for each unit of energy produced by solar cells, the net emissions of greenhouse gases and other pollutants due to the cells' manufacture were between 2 and 11 percent of what power plants in the United States and the European Union would emit to make the same amount of energy” (Berry, 2008). The downsides to solar are similar to the drawbacks of wind. The sun does not always shine, but this may not have as much of an effect any longer. As Binns writes, “A space-based solar panel can generate five times the energy of a similar panel on Earth by circumventing both weather and hours lost to darkness.” This advancement in technology could have a profound effect on energy providing. If the means of transporting energy from outside the earth to here was found to be feasible, "the National Space Society estimates that a half-mile wide band of photovoltaics in geosynchronous orbit with Earth could generate the energy equivalent of all the oil remaining on the planet over the course of one year. Though costly, launching working solar satellites is possible today.” (Binns, 2011) Another downside of solar panels here on the Earth is the amount of land and space they can take up. Until harvesting solar energy from space is feasible, solar is best used as a supplemental energy source.

Tidal power is a relatively new form of alternative energy. It uses the motions of tidal waters to produce energy. Tides, like wind and sun, are something that naturally happens as part of the earth. Unlike solar or wind energy, tides can be accurately predicted. This makes it a bit more reliable as a cloudy day or calm winds will not stop the tide from coming in as usual. As stated before, tidal is in its infancy, “A 2.25-megawatt project off the coast of Portugal went on line [in fall 2008], becoming the world's first commercial wave-energy development in operation. It can supply 1,500 households with electricity.” (Ma, 2008). Other places are considering implementing tidal power as well but the technology isn't as cheap or efficient as it needs to be yet, “costs to extract the power remain high. Wave energy costs at least 20 cents per kilowatt hour to generate, compared with 4 cents per kilowatt hour for wind power” (Ma, 2008). One problem is that the effect of tidal power on the environment isn't as known quite yet, “wave energy buoys could alter ecosystems or disrupt whale and fish migration. The fishing industry fears that wave and tidal projects could further reduce access to fishing grounds.” (Ma, 2008). Time, research, and technology will show whether tidal energy will be viable in years to come.

Alternative and renewable energy are very important in our lives. By placing importance on finding renewable and clean ways of fulfilling our energy needs, we can break our reliance on fossil fuels. Is it currently possible to switch off of fossil fuels and into alternative energy? Not quite. Time will tell if technology will be able to make these alternatives more effective that the fossil fuels we currently use.

An Introduction to Sources of Energy. (2021, Oct 31). Retrieved from http://envrexperts.com/free-essays/essay-about-introduction-sources-energy 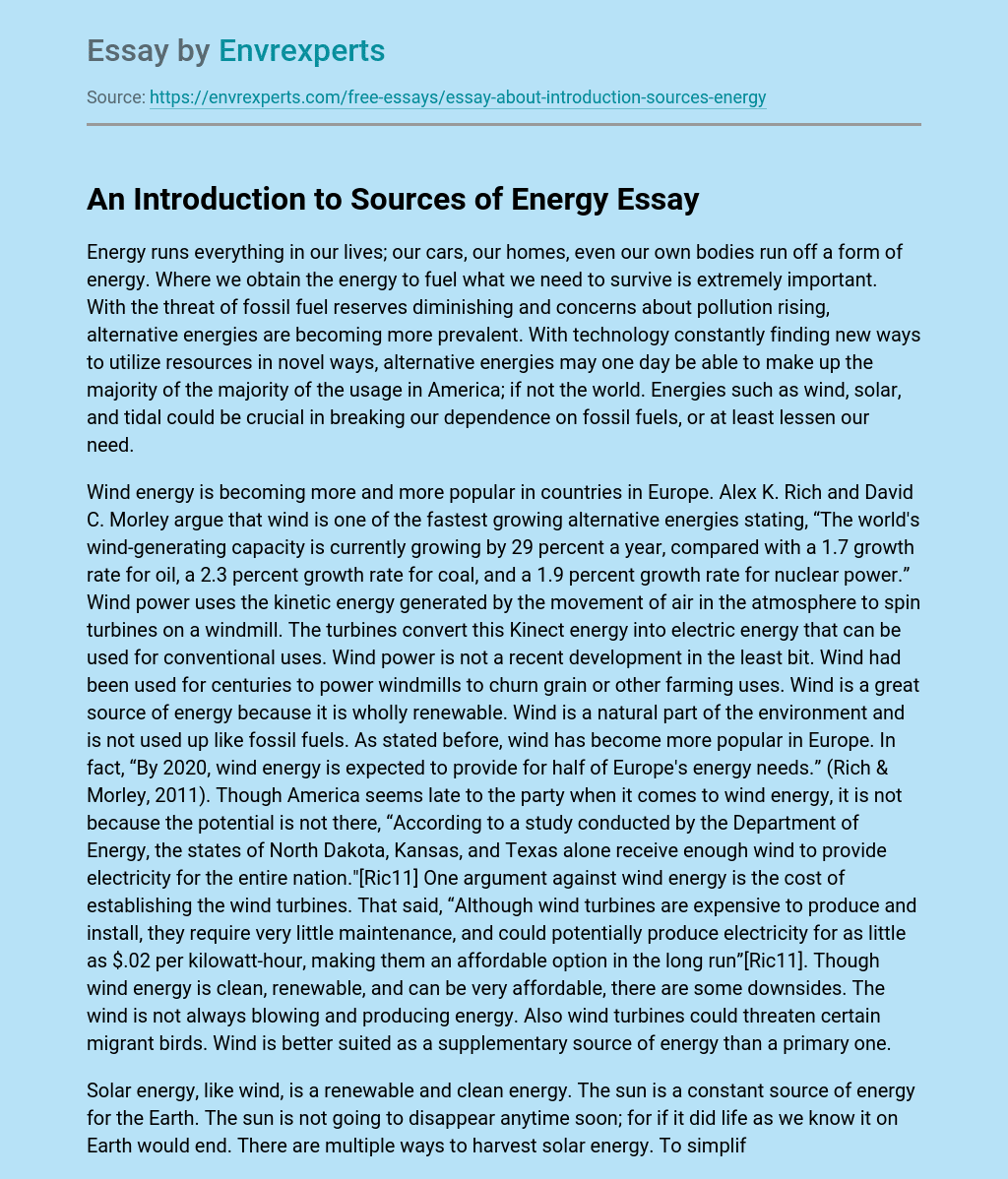