In 1912, USDA scientists Metcalf and Collins hypothesized that Japanese chestnut trees (C. crenata Siebold and Zuccarini), which were first imported to the U.S. in 1876, were carriers of the disease and responsible for its spread in this country. Within a few years, it had become clear that diseased imported chestnut trees from Japan were the most important contributing factor in the spread of the disease in the U.S. It should be noted that by 1900, many U.

Don’t waste time
Get a verified writer to help you with Invasive Species: Chestnut Trees
Hire writer
$35.80 for a 2-page paper

Reason(s) Why it has Become Established:

Because the American chestnut had never before been exposed to this fungus, it was highly susceptible to the disease. American chestnut seedlings, in particular, were most susceptible. More mature trees (i.e., trees with more than 1.5 inches in diameter at breast height), may survive the disease, although they are not immune to it. Environmental stresses, such as high elevations, extreme heat or freezing temperatures may also reduce a tree\'s resistance to the blight fungus.

The blight fungus is carried from tree to tree by small animals and insects, who pick up and thansport the infected spores from tree cankers on their feet, fur, and feathers. The disease is also spread from tree to tree by weather elements such as wind and rain. Spores from an infected tree are lifted by wind or carried by rain to a healthy tree, entering it through cracks or wounds in the bark. The spores multiply rapidly and give rise to sunken cankers that expand and kill everything above the canker–usually in one season.

It has been observed that a chestnut tree can die in as few as four days after being infected with the blight fungus.\nEcological Role: By attacking and killing the American chestnut, resulting in forest clearing and the removal of the forest canopy provided by large chestnut trees, the fungus indirectly benefits smaller hardwood trees, such as birch trees, replacing the American chestnut. Another ecological role of the fungus is that canker spores attract secondary insects and propagate their food web.

Scientists at the Boyce Thompson Institute for Plant Research at Cornell University have found that, ironically, the Chestnut blight fungus may provide the basis for the development of future pharmaceuticals. The scientists are currently examining how chemical compounds are produced by the C. parasitica fungus, as well as native American and Asian medicinal herbs, such as aloe, buckthorn and rhubarb. According to these scientists, isolating the genes for the therapeutic compounds extracted from the fungus should be relatively easy, compared to isolating similar genes from plants.

The fungus has been found to produce biologically active chemicals that reportedly have antiviral, antimicrobial, immunosupression and anticancer activities. It is ironic that an invasive species such as the blight fungus, that has spread so much devastation to an ecologically and commercially important native species such as the American chestnut, is also associated with breakthrough medical research and potential public health benefit.

In addition to the ecological threats, the fungus has also become a threat for industry and the economy. As stated above, chestnut wood is highly resistant to decay and rot, and has been used extensively for poles, fencing, and building materials. While the Chinese tree is an orchard tree, the American chestnut has historically created large tracts of big timber. Although currently imported healthy Chinese chestnut trees provide most of the chestnut supply for the U.S. market, these imported trees cannot replace our native chestnut. 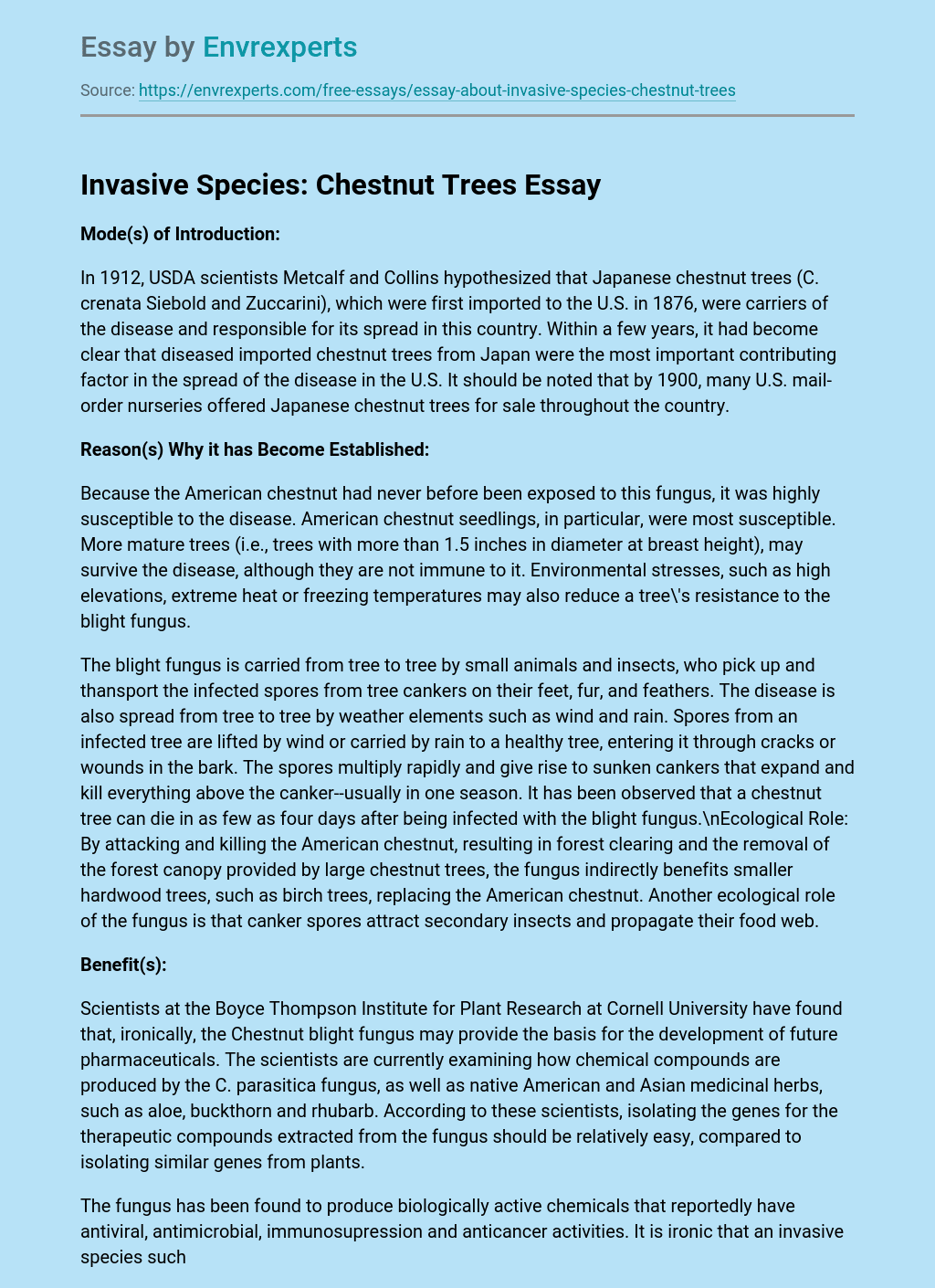