Referring to examples, discuss the threats to biodiversity hotspots and why these threats could prove critical. Biodiversity hotspots are the areas which constitute a plethora of flora and fauna comprising 2.3% of the Earth’s surface. These areas are home to numerous endemic species which are native to those spots only. Earth’s biodiversity is under constant threat. Climate change coupled with habitat loss to invasive species have introduced the sixth great mass extinction events in the history of earth.

Don’t waste time
Get a verified writer to help you with Invasive Species` Suffering of Human Active
Hire writer
$35.80 for a 2-page paper

Unsustainable consumption of resources in developed countries and increasing proverty in the developing countries are the key drivers in the destruction of the flora and fauna. For example, A global data compilation study shows that the number of land-dwelling insects are declining. World wide average indicates that the decrease is 0.92% per year which finally shows 23% over 30 years. The fresh water insects at the same time, such as mayflies and midges has amplified to 1,08% yearly, probably because of the operating water conservation policies (Klink et al.

Urbanisation and overexploitation of natural resources (mining, aquaculture, agriculture etc) rare causing major threats to the biodiversity hotspots. For e.g., regardless of their importance mangroves are waning at an alarming rate with 1–2% global loss per year, reaching 35% in the last 20 years (Splading 2010).Indian mangroves harbour a unique variety of microorganisms, plants, animals counting fishes, molluscs, crustaceans, birds, several endangered mammals such as dolphin, fruit bats, Royal Bengal Tiger etc. According to a research, the vast mangroves of India nests 3985 species of flora and fauna that comprising 3066 (77%) of fauna and 919 (23%) flora.

It is ironical that such a vast ecosystem is facing a constant peril due to incredible threat by the human intervention. The ongoing climate trend is the greatest threat to the existing worldwide mangroves. If this prevails, we could loose 100% of the mangroves in the next 10 decades (Sandilyan 2014). Diminishing mangroves would lead to loss of food, timber, fuel, medicine, breeding grounds for many terrestrial species etc. These forests are extremely productive with primary production equating those of evergreen forests. Degradation of mangrove would also mean vulnerability from catastrophic events like tsunami, tidal bores, cyclones etc and also aggravate shoreline erosion (Carugati et al 2018).

Wildlife continue to suffer extreme invasiveness from anthropogenic activities, wreaking havoc in their ecosystems. For e.g., an international research group have reported that the marine megafauna, ie, the shark is facing bigger threat from human beings. If the same continues, in the next 10 decades we will loose 18% of this mega species which will lead to 11% decline in ecological functions. Extinction of shark will lead to imbalance in large biomass consumption, biomass transfer across habitats, loss of connection between ocean ecosystems etc thereby loosing 48% of the ecological functions (Pimieto et al 2020).\nA latest study says that, throughout the 21st century, the rapidly warming climate could pose appalling worldwide biodiversity losses. The research further indicates that 4°C global temperature rises by 2100, which is very much probable, there will be an irreversible threat to biodiversity hotspots. For e.g., the entire high Arctic region might vanish, resulting in several species loss forever. Being a home to more than 21,000 species including animals, plants, microbial and fungal species, arctic flowers, lichens etc, the arctic biodiversity is very crucial. The polar bears than cannot go further north may disappear. Huge number of Arctic mammals and birds which migrate to the Arctic at a risk as well. The shrinkage of tundra ecosystem due to rising sea level will impact the material and spiritual existence of Arctic people. The tourism and fisheries which pose high economic value will be at stake. The diminishing se ice will affects the marine species thus altering the functioning of the marine food chain (Science Daily, 2014).

A research by Kano (2016) documented that, the world\'s largest freshwater capture fishery, in the Lower Mekong Basin (Indo-Burma global biodiversity hotspot) which is a home to 363 fresh water fish species is facing severe threat due to the impact of large dams. This is posing an extensive economic loss to the fisherman.\nThe Bermuda reefs are also highly threatened by settlement of human and resource extraction. Among many others, the potential pressures are costal developmental activities, extension of marine and shipping channels causing removal of reefs and sedimentation. The densely populated areas on the Bermuda has led to severe nutrient as well as chemical pollution in the near shore and harbours. Thus, these potential threats to the growth of coral reefs remove the natural barricade to storm waves, subsequently leading to increased coastal erosion (Smith et al. 2013).

In addition to this, the organisms which depend on the corals for sustenance and those which multiply by external fertilization are most likely to get affected. The organisms which are feed on corals only e.g., orange-spotted filefish (Oxymonacanthus longirostris) disappeared from Okinawa due to bleaching. Bleaching of coral and coral diseases are dominant leading to the decline of the invasive lionfish (Pterios volitans). This is causing huge economic impacts on the fisherman. Apart from these, the disappearance of the coral reefs is likely to impart the aesthetics, more precisely the tourism. \nIn conclusion the changing climatic scenario along with the growing human population is posing a continuous threat to the biodiversity hotspots. The threatened and endemic species of a particular hotspot are phased out in an alarming rate. Nevertheless, the conservation strategies depend on the intensity of the damage caused to the flora or fauna of a particular hotspot. For e.g. the bleaching of the coral reefs can be reversed to an extent whereas the loss of species from the arctic cannot be replenished. Therefore, if we fail to save the species which are on the verge of extinction now, we are moving towards a depleting future. 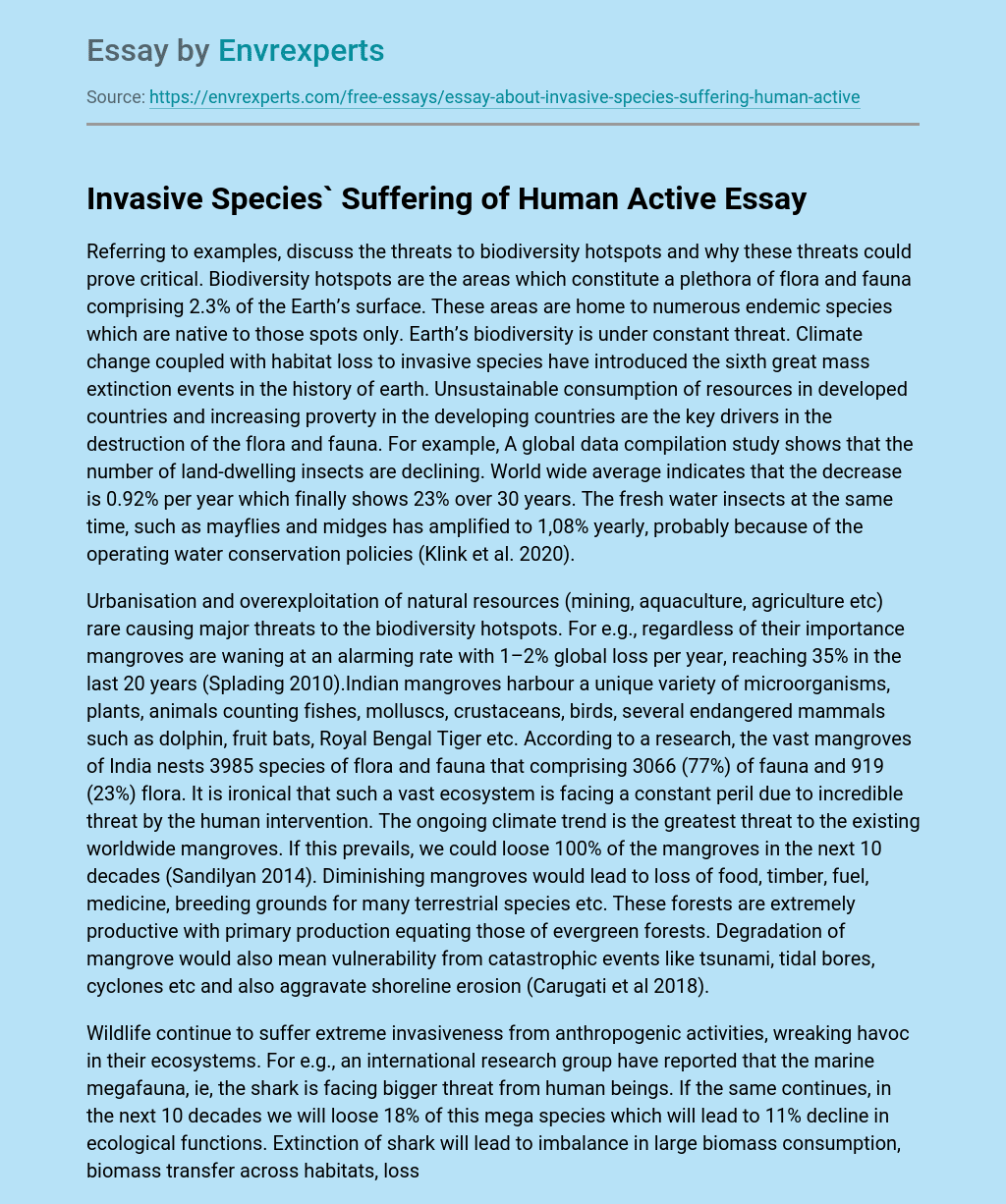