Invasive Species in the United States

There are many invasive species in the United States today but one of the most infamous species is the Asian Carp. these fish were not so bad in the early days of America, infact people wanted these fish because they were overfishing and they needed a good fast growing freshwater fish to replace and replenish many of the native fish that had rapidly decreased.

As a result of this they made fish farms in the south and they ordered several different species of fish known as carp from south asia and yes one of these species was the aisan carp while the others were bighead carp, silver carp, grass carp, and black carp.

Don’t waste time
Get a verified writer to help you with Invasive Species in the United States
Hire writer
$35.80 for a 2-page paper

The other species of carp were more for eating algae and parasites in the water and the asian carp was for the people to eat.

Asian carp were a good thing when they were contained but in 1994 there was a flood in illinois and when the flood water reseated there were hundreds of dead aisan carp washed ashore and this not only shows their rapid population growth, but they were also migrating all through the country.

aisan carp were originally only introduced in the south and now over the course of 24 years they are suddenly appearing in the north with alarming numbers. Today Aisan carp pose a great threat to our ecosystem as they continue to migrate to different states all over the U.S.

While the spread of carp is bad for any state, authorities are currently most worried about Michigan.

Because of Michigan's great lakes and the variety of native fish species they house. If carp were to come into anyone of the great lakes they would simply destroy it! Asian carp along with other invasive carp species are known to ruin water quality, and kill off muscles and snails but that\'s not all, they will also kill off many if not all native species of fish because they eat many of the same foods native species of fish eat and as a result of this combined with their vast numbers the native species would die from starvation.

Asian carp along with grass carp, silver carp , bighead carp, and blackcarp would be the only fish left in the great lakes if they were able to get through the barriers that have been put in place around this endangered state. These barriers are electrical barriers in the water meant to make the fish stay away. According to (https://www.fws.gov/columbiariver/ans/factsheets/Asian_carp.pdf ) “Authorities have also tested several other methods as well such as trapping, the use of explosives, herding with noise or light, electrical barriers, thermal barriers, bubble and noise walls, hydraulic modifications, oxygen deprivation and much more!

They are currently experimenting with a new method of stopping these fish and that is to collect carp pheromones and using them against the fish to try and control carp behavior, enhance capture rates or interfere with reproduction, but the success of these methods has been low.” There are many invasive species in the United States today but one of the most infamous species is the Asian Carp.

While these fish were good when the first people came to North America, today they are a big problem! They are tearing up our ecosystems all over the country and when they are a threat to any state they are the biggest to Michigan because of the great lakes. So far we have electrical barriers all around the great lakes , but what if some of them somehow slipped through the barriers and know one knew it until it is too late? Not only would they destroy just about every living thing in the waters and kill all of our native fish species but they can hurt people too!

However aisan carp getting into the great lakes in general is a concern,but another big concern is all the bodies of water surrounding the great lakes and the impact these fish would have if just about every big body of water in Michigan was filled with asian carp.

Invasive Species in the United States. (2021, Oct 31). Retrieved from http://envrexperts.com/free-essays/essay-about-invasive-species-united-states 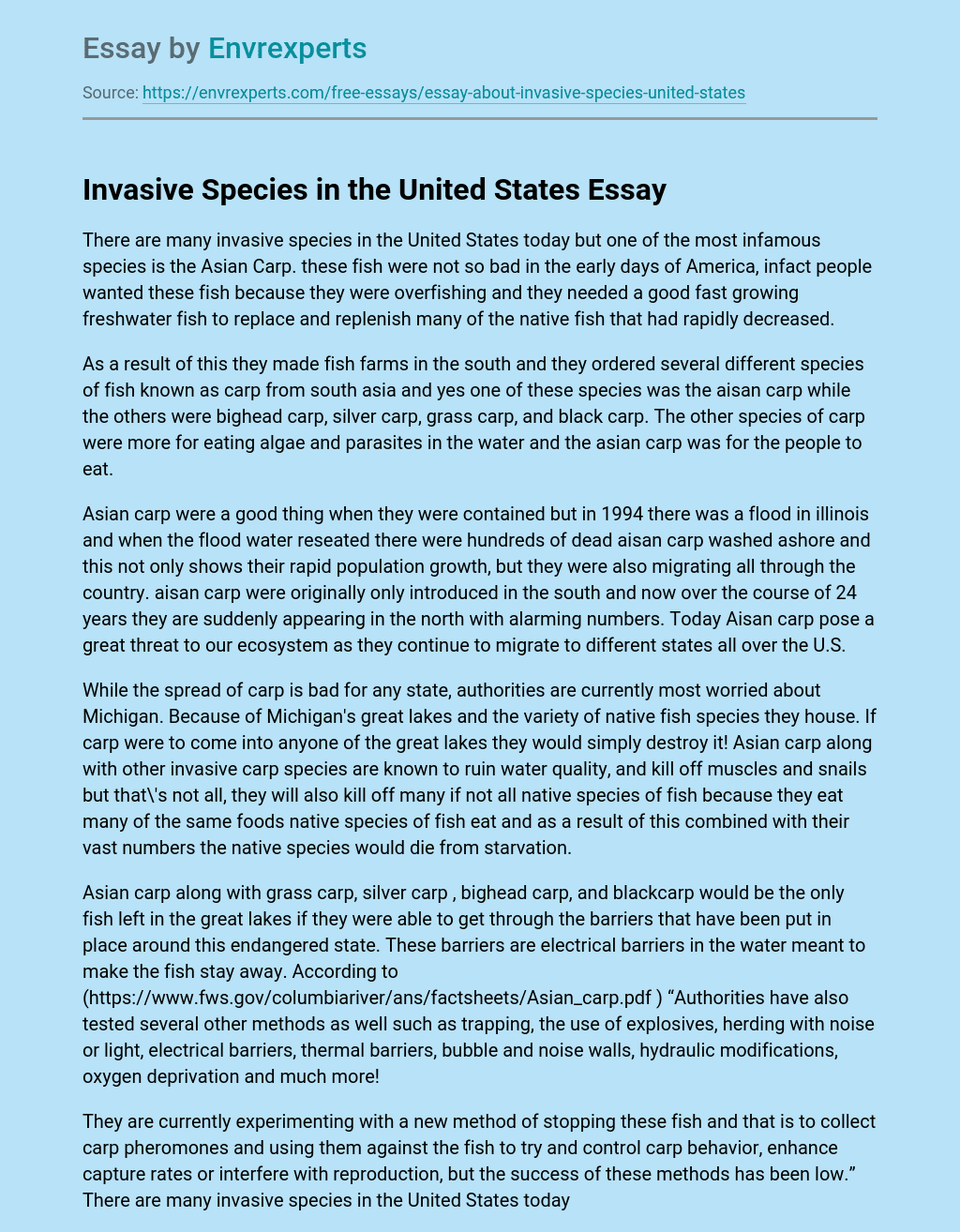