The Issue of Ignorance in The Last Call at the Oasis, a Documentary by Jessica Yu

The Last Call at the Oasis presents the real problem of water shortage in this modern century as an issue of ignorance. This educational film explained the predicament with the fresh water; we are running out. There is not any one issue that caused the drought it is a combination of a lot of different things like: climate change, over personal water usage, water pollution, and how people use water in agriculture. We are in the worst drought of the century according to news reports.

Don’t waste time
Get a verified writer to help you with The Issue of Ignorance in The Last Call at the Oasis, a Documentary by Jessica Yu
Hire writer
$35.80 for a 2-page paper

In the documentary, an interview with a random citizen showed that she didn't even know that there was a worldwide drought and she said “If we need to use recycled sewage water then we must be in some sort of shortage that I am not aware of," and continues to say, "When they take that map from outer space there's a lot of water" (Last). This ignorance is a huge part of the real reason why we have such a bad water shortage.

For life as we know it today, water is the most necessary molecule on the planet. Humans have been using this precious molecule like it is worth nothing.

In The Last Call at the Oasis, the introduction discusses what water problems even mean. It explains that half the population will be without fresh water by 2025. Americans have the biggest water intake in the world and almost all of America is in a drought (Contributor). As Americans we will run out of water if we small header is a separate box above the text do not do something soon.

Recycled water is proved to be cleaner water than tap water. Actually, it is the cleanest water out there. Within the next 30 years, people are working on selling bottled recycled water. The only reason that the public does not drink recycled water now is because of public opinion (Last).

My grandfather, Lynn Lanier as a national speaker for global warming with Al Gore. He gave his opinion about our water problem. He believes that the solution, or part of the solution, is to use the recycled water for the farm lands and use the water from the lake and the rivers for civilian use. Personally, I think that there is no reason to use perfectly good water on the crops when we should be drinking that water. Global warming is a big contributor to the drought because the hotter it is, the more water the air can hold and less falls in precipitation (Lanier). I understand but do not think that this is all we should be focusing on because all we can do about that is stop polluting. This is a long term solution. There are many additional things we can now do to help with the water shortage. I agree with the documentary. the real solution to the water crisis is recycled water.

There is no way to reverse what we have done… we can only save the water we have. The Last Call at the Oasis argues that desalination is not the option, but eventually the rivers will be bare sand beds and eventually the lakes will run dry and there will be no water except the vast oceans that tempt us with water that can't be consumed unless we desalinate the oceans. We need to act before this happens. I agree that there is problem. I agree that their theories about how we are supposed to save the world could work, but most of them are impractical. The ones that could work with money and investments are recycled water mostly but also water conservation and reduction of pollution.

Why do we even need to conserve water? Make it clear that this is the opposition from the beginning. The amount of water will always stay the same on planet earth. Conservation is not needed because there is no such thing as a water shortage. When I turn the drain on, there is water that comes out, and there will always be water that comes out. Water conservation is not a problem we need to be focusing on; there are worst problems in the world than worrying about water: the most common molecule on earth (Isn't Water). These are the opposing arguments of uneducated people.

It is true that the amount of water on planet earth will always stay the same (unless we bring it from different planets or asteroids) but the water cycle has been altered from the second we started agriculture. Now that we have sewages, showers and pools, the water cycle is changing so much that the water that is available to drink is running very low. No matter how we save the water on the land we will “run out” eventually.

I agree with The Last Call at the Oasis that we need to conserve water but that does not hide the fact that this documentary is completely biased. Each small individual idea is given an opposing idea and how it is wrong but every big idea or argument does is not have the contradicting argument. In The Last Call at the Oasis it explains how the southwest is in such a need of water that they are trying to create a pipeline from the last oasis in Nevada. They tell why it's bad and explore people who despise the idea, but they never touch the idea of why it would be a good thing (Sayre). The pipe could give water to a more needy place in the southwest. The last idea is never presented. In this way The Last Call at the Oasis is very biased.

The Issue of Ignorance in The Last Call at the Oasis, a Documentary by Jessica Yu. (2021, Oct 31). Retrieved from http://envrexperts.com/free-essays/essay-about-issue-ignorance-last-call-oasis-documentary-jessica-yu 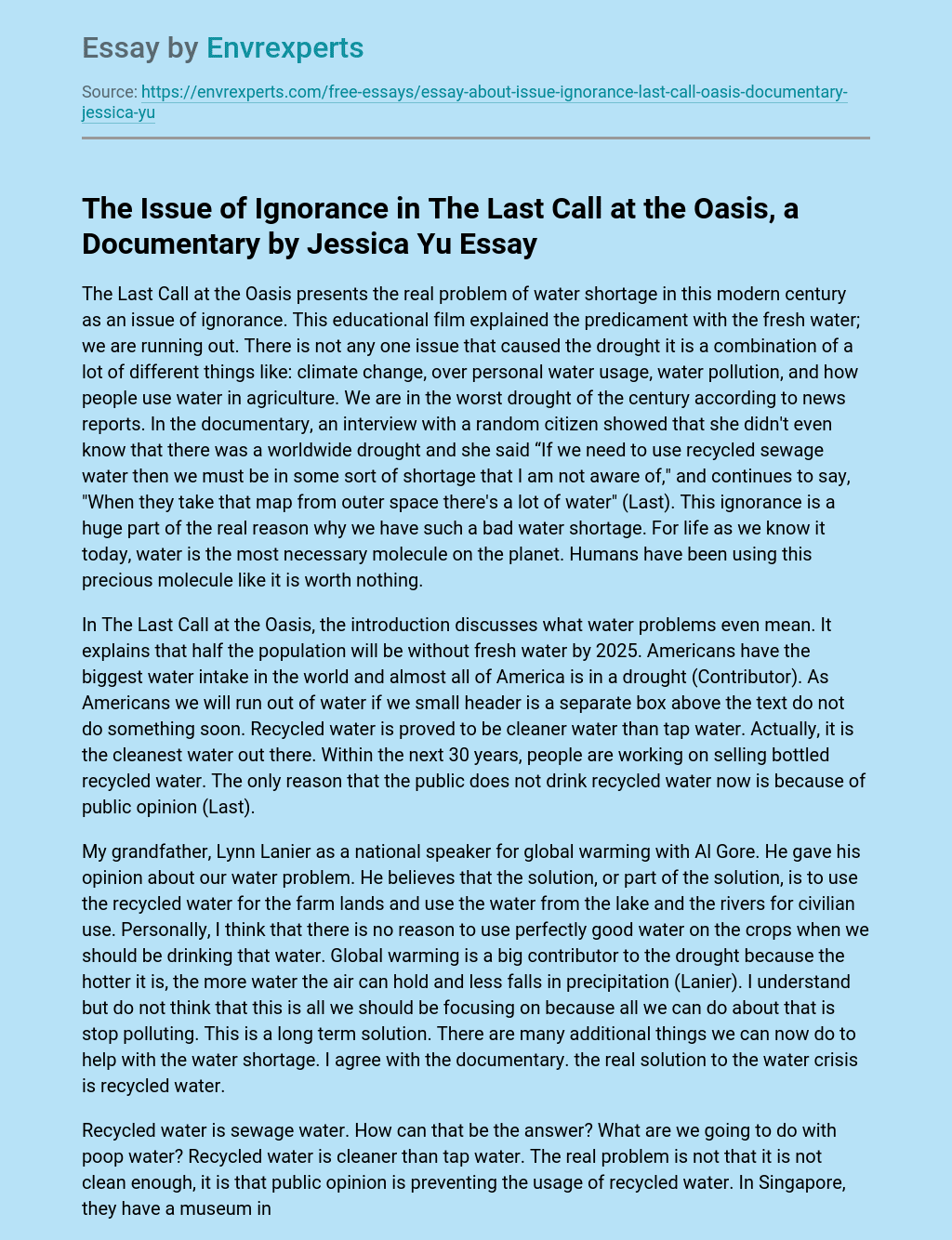