The Issues of Attracting Chinese to Russia

Don’t waste time
Get a verified writer to help you with The Issues of Attracting Chinese to Russia
Hire writer
$35.80 for a 2-page paper

The Far Eastern Federal District is the largest of 8 federal districts in Russia including 11 federal subjects with a territory of 6,952,600 km2 which comprises 40.6% of Russia’s territory and is yet the least populated with only 8,188,600 people amounting to 5,6% of Russia’s population. The gross regional product (GRP) equals to 4 3805 billion rubles which is 5.8% of GRP of the Russian Federation [2].
Numerous favorable and unique logistic opportunities as well as proximity of the global market of APR countries (55% of the world\'s population) the district borders with the largest economy of the asian-pacific region, attractive as a sales market significantly increase the investment attractiveness of the region are only some of many advantages appealing to investors.

The region has the largest reserve of mineral resources in the country and the Far Eastern basin holds third place in Russia judging by the freight turnover of marine transport which equals to about 25% of the total Russian freight turnover [3,4]. Since December 2014, infrastructure support and institutional systems for implementing investment projects have been created, some of which include tax and administrative benefits of Advanced Special Economic Zones (ASEZ) and Free Port of Vladivostok (FPV) regimes, support programs for investment projects in each region (tax and administrative) [3].

Among the 11 federal subjects, “Primorye is one of the most desirable locations for conducting business in the Far East” as stated by the Director of Primorye ASEZ Management Vasily Bolshakov. “The territory has a significant proportion of the ASEZ and FVP residents in the macro-region, largely due to its favorable geographical position, accessibility to sea, air and land transport as well as its strong scientific and technological potential” [5].

(In contrast to Asian countries, the Russian Far East has multiple natural resources, but a much less developed infrastructure and significantly less human potential. Only 4.2% of the country\'s population (about 6.2 million people) live on the territory that occupies more than a third of Russia, and this figure continues to decline, although slightly slower in recent years.
The region is in the shadow of rapidly growing neighbors and in an economic sense. Adjacent to the Far East, China and Japan, as well as South Korea, account for 23% of world GDP ($ 17.6 trillion), and the Far East – only 4.3% of Russia\'s GDP ($ 55 billion or 3.7 trillion rubles). [6] )
All of the above mentioned make the far east region of Russia a favorable and … region to invest in. but there still are many issues to why the fe isn’t receiving the needed amount of investments. To understand that we need to look more closely into

Below are examples of scientific works, the subject of which is similar to the subject of this article.
Dhananjay. S in his 2019 paper analyzes the rise in Chinese influence on the Russian Far East and discusses the possibilities of India becoming a strategic partner while weakening Chinese influence. In the authors opinion, Russia and China have diverging interests which may become more apparent in the future. Thus, Russia should use the opportunity to improve relations with the West.[10] The 7.8
Based on Li Xiaolong’s paper, STRATEGY AND PROSPECTS CHINESE INVESTMENT IN THE CONSTRUCTION INDUSTRY OF THE RUSSIAN FEDERATION Li Xiaolong 2017, which focused on 2016 data highlights the fact that the
In 2018, Qin Dong.

Chinese investment in the Russian Far East: the current status and problems, in his work focuses on the external problems
Based on 2019 , New Instruments Attracting Investment into the Russian Far East: Preliminary Assessment, Hirofumi Arai paper, which focused on 2016 data and also relates to the Alibaba group, the ability of Russian companies to compete with
In 2019, The impact of the Turn to the East Policy on foreign direct investment in the Russian Far East, Han-Sol Lee , in his article, the author analyzed the problems of providing the population… According to the author, the problems should be solved in three main topical regional economic areas: And it fur- ther analyzed that for Russia, despite the remarkable magnitude of Chinese and Japanese FDI compared to South Korea, South Korea is still the most attractive partner, in terms of lack of threats: The Chinese expansionism, and the Kuril Island dispute with Japan.
In Ma Yujun and Denis V. Suslov’s 2019 paper, the authors analyze New aspects of Russian-Chinese investment cooperation in the Russian Far East 2019, ticle analyzes the dynamics and structure of foreign direct investment attraction in the Russian Far East in 2015-2018 give a plethora of statistical data in their work on the Chinese-Russian Internet trade. Cross-border sales are\nBased on, opinion, in the face of declining indicators of economic development, growth of e-business are a global technological trend\nIn (2019 An analysis of foreign direct investment attractiveness of Lousianin S. G., Afonasyeva A. V., Han-Sol Lee ) the paper mentioned that political flexibility is an economical issue. The number of members of the AIIB has increased to 54
Others (see above) have described Alibaba’s influence as well as the data on the statistics and challenges identified earlier.

In this paper, data was summarized and applied using different methods of collection, then reviewed immediately for the years 2015–2017.
strengths and weaknesses of methodologies used\nThe authors of the above-mentioned works analyze the General state of food security in China, as well as some proposals to solve these problems.
many recent studies have focused on the problem of x”) or highlight a gap in the literature (“while there has been much research on Chinese investment in general, few researchers have taken y into consideration exactly chinese investments in infrastructure on the far east” This work will identify gaps and areas that should be filled in presidential communication and social media strategy –( nothing about indfrastructure investments in the far east of Russia)

In order to have a better understanding of the topic, this paper will address the issues of attracting Chinese infrastructure investments to the Far East region of Russia and recommendations for overcoming identified problems. Secondary data, as well as qualitative and quantitative approaches, were used to research and analyze these issues. Official scientific journals, government reports, official statistics, financial sources, analytical reviews, official journal articles and other sources were used to obtain secondary data, the purpose of which is to research and analyze the existing information. The secondary data was collected in English, Russian and Chinese languages. The author conducted an analysis for 2014-2019 years.
Using various approaches for collecting data, the main objectives pursued by the author were:

An analysis of the general situation of FDI in the Far East region shows that The overall investment situation in Russian economy: The volume of foreign direct investment in the Russian economy after the imposition of sanctions and the jump in exchange rates in 2014 decreased by almost 2.5 times. According to the United Nations Conference on Trade and Development (UNCTAD), in 2013 this figure was $ 53.4 billion, and by 2015 it fell to $ 11.9 billion (see Figure 30). The dynamics improved somewhat in 2016 – then foreign investors invested $ 37.7 billion in Russia (which is more than the 2014 level of $ 29.2 billion). [11] [Минакир, 2017. С. 1016–1029]
As for the far east of Russia it is still receiving the lowest share In 2018, incoming direct investments in the fe were at a minimum level for eight years and amounted to $ 5.5 billion in nominal terms. Their share of all incoming Russian investments – $ 140.4 billion – reached 4%, reaching the level of 2013 and 2011 (see. figure 40).
According to the Central Bank, in the vast majority of cases, foreign investors invest in capital – 93.8%, or $ 72.5 billion. Infrastructure investments have so far accounted for a minimum of foreign investment. Over ten years, only $ 89 million fell into construction from abroad, and in 2018, the outflow of capital of construction companies amounted to $ 12 million [стр 77 номер 7 инфраone]
According to research conducted by InfraOne Research agency, the Far East Federal district’s economy remains the penultimate in the country, even with the appearance of 2 new regions in the district. This situation only increased the demand for investments, especially in infrastructure. [7 pg6]
Although as stated by the Director of Primorye ASEZ Management Vasily Bolshakov: to date RUB215,1 billion have been invested in the region\'s economy. Popular industries include housing construction, logistics, engineering, tourism, medicine, agriculture and many more. [5] it is still not enough to make the regions economy at an average level among other regions of Russia.
[conclusion]The agency states that there are very few prerequisites for the region to receive additional support from the government or to attract significant off-budget investments in the industry. [7]
However, the government is trying to обратить внимание не только инвесторов, но и самостоятельно поддержать инфраструктуру страны as a main element in The Federal budget for 2019 and for the planned period 2020 and 2021 by the Ministry Of Finance Of The Russian Federation will be a Comprehensive Plan for the modernization and expansion of the main infrastructure, and prioritize the state policy in the field of transport in 2019–2021 by accelerating and high-quality development of transport infrastructure. It was mentioned, that the implementation of the transport part of the Comprehensive Plan will contribute to the achievement of results such as an increase in the “Transport Infrastructure Quality Index” by 15.5% over 6 years (compared to 2017). [8 pg ] . Nonetheless, since Russia plans to invest about 6.3% of annual GDP in the infrastructure plan and spend about 1% annually, in total equating to the level of developed countries, the majority of investments in projects that are already included in the comprehensive plan and have a geographic reference will fall on the Central Federal District, where as the Far Eastern Federal District receives expenses of only 168 billion rubles, being 3rd lowest compared with other federal districts, which will still accordingly the quality of infrastructure is significantly lagging [9, P15,55 ].

The Issues of Attracting Chinese to Russia. (2021, Oct 31). Retrieved from http://envrexperts.com/free-essays/essay-about-issues-attracting-chinese-russia 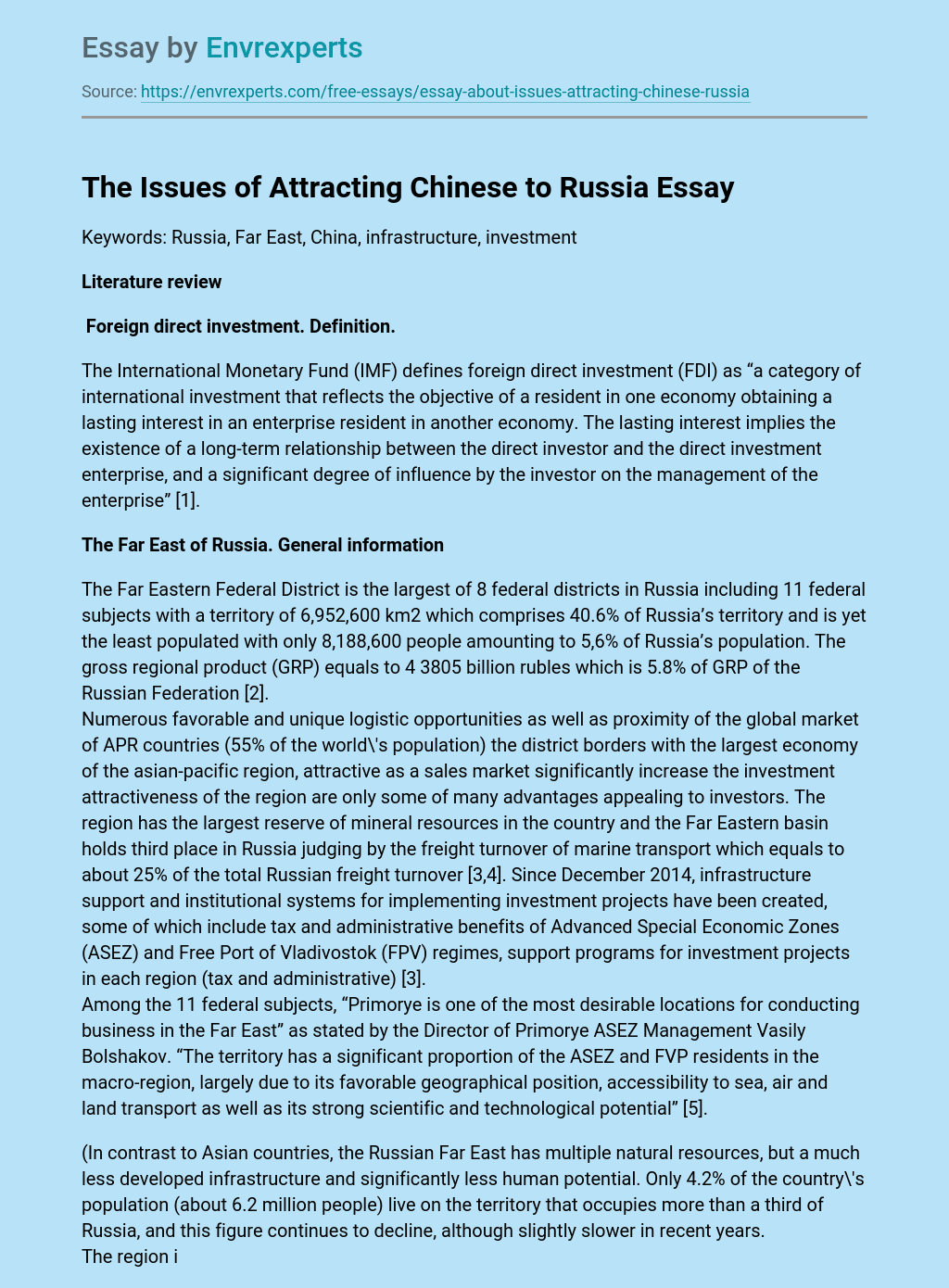