An Issues of Groundwaters

Background and Statement of the problem

Water is the amplest substance on earth the principal constituent of all living things, and a major force persistently influencing the surface of the earth it is also a key factor in the air habituation of earth for human existence and in flouncing the progress of civilization. Human civilization depends heavily upon the water. Although more than 70% of the earth’s surface is covered with water, we can only use merely 1% of the total water.

Don’t waste time
Get a verified writer to help you with An Issues of Groundwaters
Hire writer
$35.80 for a 2-page paper

Almost 97% of the total water is saline by nature and the rest of the 3% remains as freshwater. Most of the fresh water is stored as ice in glaciers and polar ice sheets. Almost 30% of total freshwater is stored in aquifers as groundwater and less than 1% is available at lakes and rivers (Ganapuram, Kumar, Krishna, Kahya, & Demirel, 2009). Water is a crucial source of life and is required in sufficient quantity and acceptable quality to sustain all human activities such as domestic needs, agriculture, industries, etc.

This requirement, however, is hardly fulfilled in arid and semi-arid environments where water is an inadequate resource. Groundwater, or subsurface water, is a term used to represent all the waters found below the ground surface.

The condition of the groundwater level and the rate is differing from the geological nature of the earth. Groundwater is naturally replenished by rain or snow melts which soak down through the soil and or pore spaces of underlying rocks Hence, its rate and distribution depend on the climate and regional situation of the region, surface and subsurface features such as fractures in the underlying rock, land use type, geomorphic features, structural features and their interrelationships with the hydrological characters- tics.

(Gebre, Ahmad, & Dar, 2018). Groundwater is the safest and most reliable water source, use in domestic, irrigation, industries, and municipality purposes due to its several inherent qualities (e.g. consistent temperature, widespread and continuous availability, excellent natural quality, limited vulnerability, low development cost, and drought reliability), it has become an important and dependable source of water supplies in all climatic regions including both urban and rural areas of developed and developing countries (Karnataka, Hutti, & Nijagunappa, 2011).

Groundwater development for water supply purpose is desirable to low discharge springs and dug wells because they are originated to be inadequate yield and no extended resistant drought whereas most of them might be totally dried out and never easily recovered after the prolonged drought time. The occurrence, Origin, movement, and chemical constituents of groundwater are dependent on geology lithology, Geomorphology /Landforms, drainage density, rainfall, Geological structures/lineaments, slope, Land use/Land cover and soil of groundwater regime. Groundwater studies have become crucial not only for targeting groundwater potential zones but also for monitoring and conserving this vital resource (Approach, 2018). Ethiopian lakes are of great significance to Ethiopia’s economy and crucial to the survival of the local folks. Though, they are vulnerable by increasing consumption and environmental degradation. The study area was a mother of four lakes named Tinike, Haramaya, Addele, and Harajitu Lakes. Among the four lakes, Harajitu Lake disappeared before many years, Haramaya and Adelle lakes are now disappearing or became seasonal, while Lake Tinkie is the only living and currently utilized lake in the district). These lakes were excellent surface water resources utilized for irrigation, drinking, and other domestic consumption for rural and urban communities (Abebe, 2014).

The loss of the Haramaya lake water caused in the loss of drinking and irrigation water, fishing activities, climatic imbalance, and increased cost of production and decreased production and creates incidences of struggles among farmers due to land proprietorship. In the current years, the area around the lake has been completely changed to cultivation. these opposing influences of the environment are disastrous and have an evil significance on the country’s economy in over-all and the rural livelihoods, in particular, There were numerous studies on Lake Haramaya concentrating on identifying the reasons of the deteriorating, ultimate demise of the lake and its adverse effects. Besides in the area, there is no guideline for the abstraction of water from the ground. Also, there is no prearranged prioritization among different water uses and water users. All these practices depict the groundwater resources of the area to mismanagement and risk. There are several methodologies to locate and map the occurrence and distribution of groundwater Thus, as a part of substantial the gap, the current study, GIS, and remote sensing techniques were used to systematically assess the evaluation of occurrences of groundwater Recharge and potential zone in the area.

Specific Objectives: To Evaluate and Delineate Groundwater Potential and Recharge Zone of the Area by Using Remote Sensing and Geospatial Data Analysis. To Formulate the Thematic Maps of the Study Area Such as Lithology, Land Use/Cover, Slope, Lineaments Density, Soil Texture, Drainage Density, Geomorphology, Rainfall, Transmissivity, Hydraulic conductivity and Depth to bedrock To Assess the Capacity of Currently Used GIS and Remote Sensing Techniques to Differentiate or Delineate Target Features Regulatory Groundwater Occurrence and distribution Controlling Parameters in the Study Area and Their Relationship to Each Other. To Identify the Degree of Role of Groundwater Occurrence to Deliver Information for Decision Makers Allow to Retrieve as Required for Planning and Management of Water Resources for both Domestic and Agricultural Purposes.

Significance of the study

Ethiopia is one of the countries in Africa known by abundant water resource nonetheless there is the least utilization to groundwater for irrigation, domestic life, and lively wood. Groundwater use is rapidly increasing in Haramaya Watershed, carrying several benefits to small scale farmers by allowing them to cultivate more harvests and minimizing the impact of water shortages that occur during the dry season. The unscientific exploitation of groundwater is leading to water scarcity. So By considering the problem, this research study is expected to produce a groundwater potential zone map that demarcates the study area into different zones according to their groundwater potential. This study analyzes, design and map the spatial and temporal distribution of, groundwater availability, identify recharge areas and factors for groundwater formation for the study area and assess the capacity of currently used GIS and RS techniques.

An Issues of Groundwaters. (2021, Oct 31). Retrieved from http://envrexperts.com/free-essays/essay-about-issues-groundwaters 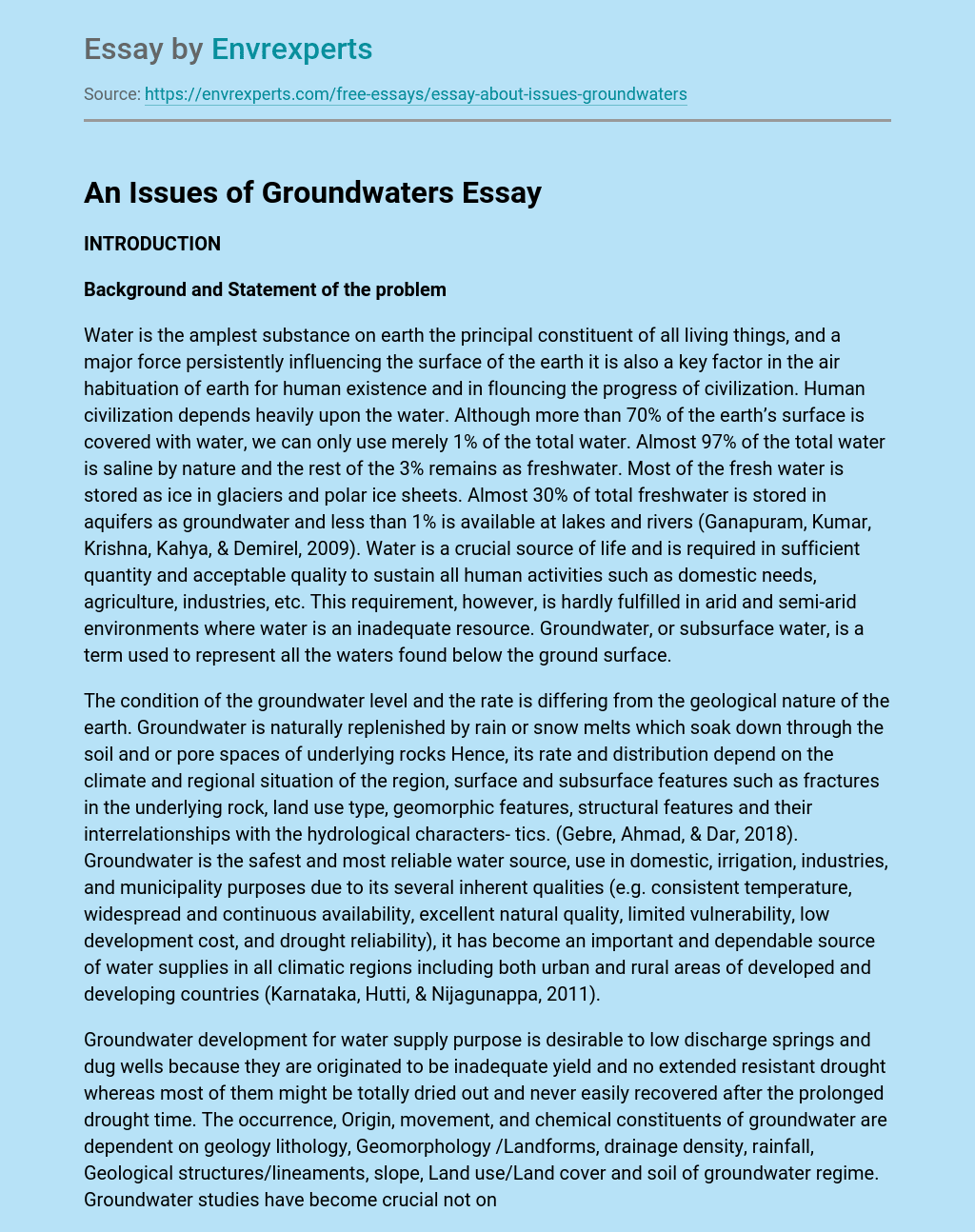