James L. Payne presents an opinion on climate change in The Independent Review entitled 'The Real Case against Activist Global Warming Policy.' The article was published in 2014, the same year that President Barack Obama declared in his 2014 State of the Union address that “Climate change is a fact” (Payne, 2014, p. 265). This summoning many alarmists, as Payne (2014) refers to climate change acceptors in an extreme sense, and the "deniers,” being those who see climate change as a complete falsehood (p.

Don’t waste time
Get a verified writer to help you with James L. Payne’s Views on Climate Change
Hire writer
$35.80 for a 2-page paper

265). Payne shows that issue of climate change "isn't simple," and that the activist position, being in agreement with climate change, has many assumptions attached to it (p. 265). He shows the activist stance and describes it as the setup for the global warming debate, specifically the first three propositions (Payne, 2014, p. 266). Payne expresses that with the positions the IPCC? has proposed leave room for skepticism because the group "expresses their finding and predictions with probabilistic language […] never using the term certain” (p.

266). There are also problems shown with how the scientists cannot conduct controlled experiments on the issues and that they only have theories to present in their case (Payne, 2014, p. 266). The problem is that the activist use assumptions in their claims of climate change yet only have the probability of the fact, this is what drives the skeptics and deniers of global warming (Payne, 2014, p. 266). Yet, Payne shows where the deniers use similar tactics with interpreting data in order to confirm their biases (p.

267). Payne thinks that the activists sensationalize the idea of climate change and that they do not account for “incremental changes in human behavior over time" that would change the outcome of the claims being made (p.268). Payne refers to this sensationalism as "sneaky semantic elision” and that “this pattern of sloppy, hysterical claims needs to be combatted with systematic studies of trends and costs” (p. 267). He moves into the debate of public policy and how it is used  climate change. Payne says that “the global warming issue presents a […] complex problem in benefit-cost analysis” and claims that they have a huge cost to people and that the cost may exceed any benefits of slowing the process of global warming (p. 269). Skeptics see the government as a machine that is not out to save us all, like activists believe in the issue of climate change, and it is proposed that it may be childish of activists to view the government this way (Payne, 2014, p. 269-270). Payne ends his article by stating that in order for the climate change effort to be effective it has to be an international effort with "major governments [who can) enact drastic […] policies and maintain those policies” (p.270). He highlights that these governments who are able to enact these polices must also maintain them “decade after decade, unaffected by special interests, shifting opinions, demagogy, scandals, and corruption,” so basically, only the purest of democracies (Payne, 2014, p. 270). In the article Payne appears to do a decent job at not siding with the activists or deniers, but the pessimism from the lack of factual data in climate change appears to be overbearing in come cases when he is trying to sympathize with that party. The opinion looks to be that both sides of the spectrum present logical issues in presenting their arguments for what their views are and he is working through these issues in the journal.

Subhash Janardhan Bhore wrote an opinion for the the International Journal of Environmental Research and Public Health entitled the 'Paris Agreement on Climate Change: A Booster to Enable Sustainable Global Development and Bevond.' The article was published in November of 2016, just after the "historic" 'Paris Agreement on Climate Change (PACC)' was enacted by the United Nations (UN) on 4 November 2016 (Bhore, 2016, p.1). Bhore (2016) states immediately in the opinion that “global warming and its adverse effects on the atmosphere […] are obvious,” and that the international community is “fully convinced” that the problem needs to be addresse help accomplish the goals of global sustainable development. The author believes that this agreement was a great moment for the global community as the United Nations (UN)," and throughout the article continues to praise the enacting of this agreement and understanding of the issue in the international community. There is an emphasis placed on how the international community came to an understanding of the severity of climate change being an issue facing our world. Bhore states that “climate change is affecting global health, poverty, food security, and national and global security,” and that these issues provided the scope for global policy makers to enact change (p. 2). The author discusses scientific data, and PACC is working to keep global temperatures below certain levels that have been deemed to be detrimental to earth, and they have created policy measures that should lower the amount of greenhouse gas emissions (Bhore, 2016, p.1).

The opinion of the author is very clear, Bhore is heavily in favor of the ‘Paris Agreement on Climate Change (PACC)'and wants to see it come to fruition and feels that the UN has taken a “very bold and ambitious step” by doing this (p. 2). The author also views the enactment of this agreement as improving the lives of people and that it will make the future a better and safer place, because they realize that the impacts of climate change are “inevitable” (Bhore, 2016, p. 3-4). Bhore concludes the opinion by stating that “there is a considerable amount of work that needs to be done,” in references to climate change, reducing greenhouse house gases, and boosting global sustainable development. David G. Victor and James P. Leap wrote an article for the journal Nature entitled ‘After the talks.' The article sub-title states “The real business of decarbonization begins after an agreement is signed at the Paris climate conference,” and this issue argued respectively but Victor and Leap (2014, p. 439). The two scholars start by noting that an agreement on climate change has finally been adopted after years of failure to do so globally (Victor & Leap, 2014, p. 439). There were many contributing groups that aided in making this possible, including; business and environmental agencies, as well as, governments, development banks and other foundations (p. 439). The United Nations (UN) and the French government have created an agenda that will “bring [the] efforts together” of these groups to help even “the poorest of countries to pay for cutting emissions and prepare for a changing climate” (Victor & Leap, 2014, p. 439). Victor and Leap state that the Paris meetings “are a crucial ingredient for effective international cooperation,” in that it will give firms the confidence to “invest in a future with lower emissions if they think others will do the same” (p. 439). There is still the pressing problem of how to hold nations accountable, but the diplomats chose to postpone on how to deal with that issue, according to Victor and Leap (p. 439). The most notable aspect of this to the authors, is that society, especially businesses, have to do their part and act on their promises to help combat climate change, cut their emissions, and invest in their own accountability and review, the latter being a crucial role for NGOs (p. 439-440). The businesses have to stay engaged even when the world's media and political leaders are not watching (p.440). Victor and Leap argue that consumer backlash can hold companies accountable if they are not keeping their promises to the environment and being destructive (p.440). It is also important that "NGOs maintain the pressure for action and [that they] work with companies to secure broader forms in major producing countries,” which will require them to collaborate and possibly offer economic incentives (Victor & Leap, 2014, p. 440).

There is a fear of the unknown in doing this and governments look to each other to act out, and this is why international cooperation is needed so badly (p. 440). The 'intended nationally determined contributions' (INDCs) where created with this purpose in mind, because they “allow governments to align their commitments with national priorities” (Victor & Leap, 2014, p.440). China is a good example of and INDC, because the country is already battling air quality issues and energy security problems, and proactive measures combatting these issues prove to help slow global warming (p.440). The authors recognize that the UN can only do so much and suggest that countries try to work together in smaller groups or volunteer to achieve goals, even if based on self-interest. Victor and Leap, show that there must be transparency with issues like this, and that scientists have to work together to come up with good policy reforms in order to achieve the goals (p.441).

In my lifetime, I have always been aware of the ever pressing issue of global warming. More recently, I recognize the issue to be climate change, in that our climate is changing because of the increased concentration of greenhouse gasses, or carbon dioxide, in the atmosphere (Bohr, 2016, p.1). I am personally an advocate for protecting our planet and combatting climate change. The implementation of the Paris Agreement on Climate Change (PACC) in November of 2016 was a huge step for our earth in the right direction, and I agree with Bohr (2016) saying that this was a “great moment for the global community” (p.1). Hoad (2015) discusses that PACC was very notable because they were able to create a unanimous, legally binding decision in accord to key factors of climate change, even though there were complexities and difficulties in vulnerable international states (p.315-316). It is great that the United Nations as a global institution was able to work with the international realm of players and get everyone to unanimously agree to combat this issue but, I question the legitimacy of this agreement. Victor and Leap (2015) show many issues that arise when working with businesses and organizations when working toward this goal, and that is cooperation and how to hold them accountable (p. 439-440). There has to be a pressing incentive to get everyone to participate in the agreement and show their results and active participation. In my opinion, the capitalistic nature of many societies would be heavily against an agreement that works to cost corporations and businesses more money. Payne (2014) shows in his article that climate change policy comes with a price, it costs money to protect the environment, and it will cost businesses too (p. 267). With countries like China and India, there is already an active participation in working against environmental issues and promotion of methods to solve them, so there are self-interests at work. I think the governments should have to make binding commitments to work towards to help preserve our planet and provide a better quality of life to their citizens. The use of bindin commitments would greater enable the change to take place. With these commitments, incentives for cooperation would probably need to be made to ensure that the countries can commit to the goals of the UN about climate change policy. 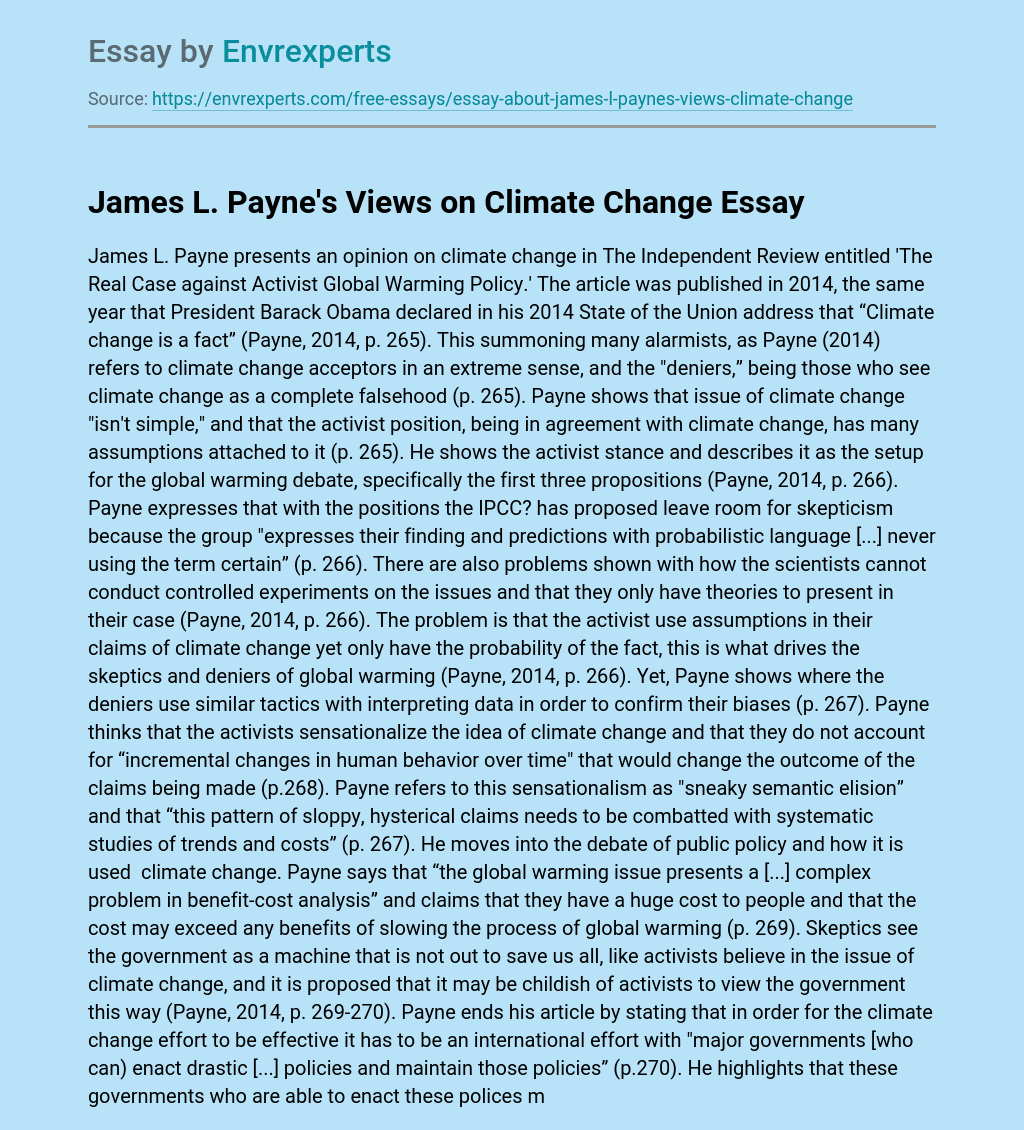