It is undeniable that a lot has changed in the past ten years. We are constantly connected to everyone and everything happening around the world on our iPhone’s and Samsung Galaxy’s (when they aren’t catching fire) in a way we never thought possible. Ten years ago when Elizabeth Kolbert published Field Notes from a Catastrophe, it was a different world. With that being said, this book still has merit and a place in today’s dialogue.

Don’t waste time
Get a verified writer to help you with A Journalistic Approach to Educate and Motivate the Audience on the Issues of Climate Change in Field Notes from a Catastrophe by Elizabeth Kolbert
Hire writer
$35.80 for a 2-page paper

Kolbert took a journalistic approach to educate and motivate people on climate change issues. Rather than using lots of climate models or theoretical projections to send her message, she uses firsthand observations of climate change at various locations around the world. Of course, there are references to such models and projections, but Kolbert tells us a story about those experiences. Such as traveling to the Arctic and discovering the alarming truth about permafrost or to the Netherlands where local communities are already preparing for rising sea levels from melting Arctic ice sheets.

The book’s goal is to send a clear, coherent, and timeless message, which can easily be summarized into this quote, “it may seem impossible to imagine that a technologically advanced society could choose, in essence, to destroy itself, but that is what we are now in the process of doing”. Kolbert urges people to recognize the growing changes taking place around the globe and the need to address the issue before for it is too late.

Although, I suppose the book is now slightly out of date (published 10 years ago), there is no doubt that the experiences she writes of, such as in Alaska, have gone from bad to worse.

Kolbert has a variety of arguments that she uses to make a case for climate change. One of her most convincing is outlined in Chapter 5: The Curse of Akkad. By providing the example of the collapse of the Akkadian Empire, she depicts the fate of countless other civilizations and makes it clear that climate change has, in the past, had a serious impact on human life. History is an extremely powerful tool that can be used to help prevent history from repeating itself. Climate change skeptics (or corporations and lobbyists) can attempt to spin scientific findings in a way that suits their personal interests, but they cannot deny the facts of history. Unlike her other arguments, this one relies heavily on historians, as opposed to scientists, which makes her overall argument more well rounded. Chapter 7: Business as Usual, addresses how to confront the major effects of global climate destabilization. She starts by examining Robert Socolow and Stephen Pacala’s set of 15 stabilization wedges, each of which should prevent one billion metric tons of carbon dioxide from being emitted by 2054. However, it was alarming to find out that out of these fifteen, twelve are needed to simply maintain the current trajectory of increase. The rate of emissions is expected to increase with the growth of economies and population densities, especially in developing countries. In Chapter 8: The Day After Kyoto, there is a discussion on the Kyoto Protocol and how the U.S. contributes 25% of the total global greenhouse gas emissions. Interestingly enough, the Senate blocked the U.S. from participation by introducing the Byrd-Hagel Resolution, calling on the government to reject any agreements, committing it to emissions reductions unless the same obligations extended to developing countries. This resolution was the handiwork of major corporations that had much to lose from a U.S. commitment to reduce emissions. Ford, ExxonMobil, Texaco, GM, and Shell to name a few, spent nearly $13 million on lobbying efforts to pass the resolution. The George W. Bush administration felt the pressure and withdrew the United States from the Kyoto negotiations. Kolbert also notes that the Bush administration “had also repeatedly emphasized the uncertainties of climate change science and had attempted to edit reports of the Environmental Protection Agency, which stated the contrary”. President-elect Trump has already appointed Myron Ebell to lead the EPA transition team, an outspoken climate change skeptic. Perhaps we will be seeing history repeat itself during the Trump administration? Hopefully not. I found that Kolbert’s least convincing argument to be in Chapter 10: Man in the Anthropocene, which addresses the dangers of a less commonly known greenhouse gas, chlorofluorocarbons, or CFCs. I know from other sources that CFCs are very destructive to the ozone layer, but I think that Kolbert may have overlooked the effect CFCs have on climate change. CFCs are still used today in air conditioning and refrigeration systems, meaning they are still an issue, yet the chapter was only six pages long.

Field Notes from a Catastrophe is a combination of three approaches: scientific discussions, politics, and visits to specific sites around the world. Instead of throwing a bunch of numbers and figures to the reader, Kolbert tells a story, which sends a more powerful message. There is no doubt that her strongest approach was the recounts of her site visits around the world. I might not remember the exact amount of metric tons of C02 emissions being released into the air each year; but, how could I forget Kolbert’s journey to the Alaskan outback with Romanovsky? Or his analogy that carbon stored in permafrost is “like ready-use mix – just a little heat, and it will start cooking, I think it’s just a time bomb, just waiting for a little warmer conditions” (as I read in a Russian accent)? Situations like these might be the most memorable, but the political and scientific discussions are necessary for the reader to understand the severity of the issue. There is a good balance between the three approaches, making the book not too dry and not too oversimplified. I think this type of journalistic approach would be the best way to educate and motivate the public. Like I said before, explaining climate change as a story makes it easier for the average person to understand and to relate to. Who knows? Maybe it will cause Myron Ebell to rethink his stance on climate change?

Overall, I found the book to be quite captivating since it took a new approach to explaining climate change. Even though it was published a decade ago, the message portrayed is just as relevant. The world needs to wake up. We all need to make changes; otherwise, we won’t have a world.

A Journalistic Approach to Educate and Motivate the Audience on the Issues of Climate Change in Field Notes from a Catastrophe by Elizabeth Kolbert. (2021, Oct 31). Retrieved from http://envrexperts.com/free-essays/essay-about-journalistic-approach-educate-and-motivate-audience-issues-climate-change-field-notes-catastrophe-el 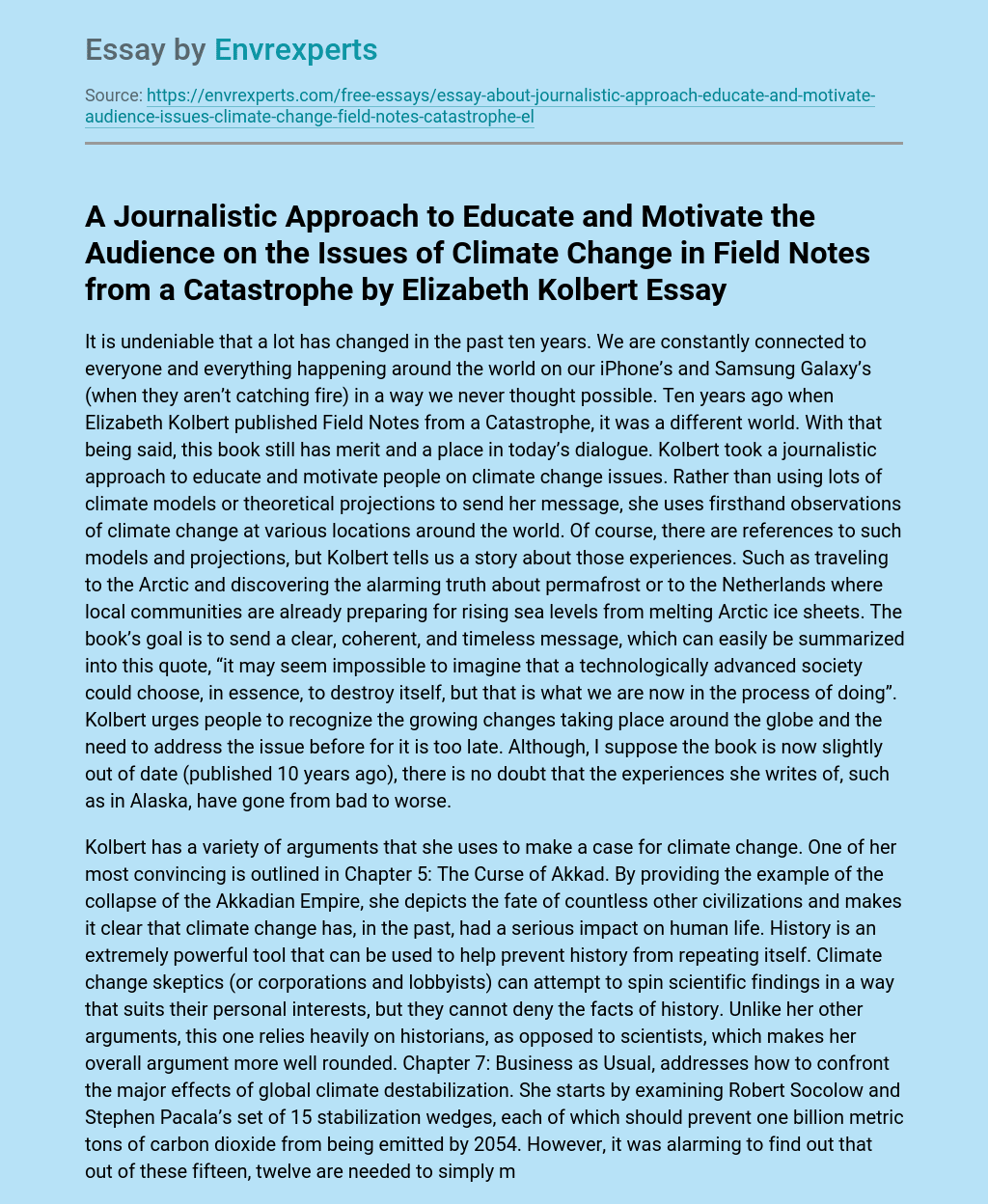