The Kalamazoo River oil spill was the worst oil spill in Michigan's history. Well over800,000 gallons of crude oil were spilled from an Enbridge pipeline in a creek upriver, andsubsequently flowed downriver, causing devastating effects to the surrounding areas and theriver's ecosystem itself. It is clear that Enbridge dropped the ball, and that the entire situationwas avoidable.The spill received a quick response from governmental agencies. The MichiganDepartment of Environmental Quality partnered with the United States Environmental ProtectionAgency, as well as local agencies, to develop a plan to manage and restore the afflicted area, andto inform the community on the process.

Don’t waste time
Get a verified writer to help you with Kalamazoo River Oil Spill Analysis
Hire writer
$35.80 for a 2-page paper

They released reports on the effects and the timeline ofthe effort.As far as the spill goes, the cleanup management is straightforward: get every last drop ofoil out of the river. The management of the aftereffects, however, is more complex. Thequestions that have to be answered include how the species of the river can rebound, and how thesituation can be ultimately prevented from ever happening again.

These are complicatedquestions and they have many different potential solutions.

This paper addresses the initial effects of the crude oil spill in the Kalamazoo River, interms of the environment as well as the economy. From the perspective of different governmental agencies, it describes the timeline of the management process. Lastly, it explorespotential management and restoration options to ensure this situation never happens in the future.

An interesting note, to start, is that the Kalamazoo River oil spill was the first ever tarsands oil (diluted bitumen) exposure in freshwater.

This confused scientists, as they did notactually know what the short and long term effects of this would be. They turned to priorresearch on oceanic oil spills, as well as the ecological consequences of heavy metal in water(closest research to diluted bitumen) and their effects on the environment to accurately predictwhat would happen. The immediate effects they observed were essentially as expected. Thesurrounding residents were concerned about drinking water. They found that some of thegroundwater supply was contaminated, but not to a dangerous level according to state standards.An immediate economical effect was the recreational value of the river, as it was immediatelyclosed to boating, swimming, fishing, and other water activities that local residents previouslyenjoyed. It was opened a year later with the assurance that the oil is not toxic, and it was safe tobe exposed to. Residents were wary, however, because the river was still dirty and not desirablefor recreation'. Furthermore, one thing that scientists are sure of is that oil is eventuallybiodegradable, and does evaporate and break down into different chemicals. Evaporation of theoil put chemicals into the surrounding air, and showed devastating health effects on the residentsimmediately next to the river. The community reported headaches, dizziness, rashes, fatigue, and even more serious effects such as seizures Two health reports were released, one exploring theeffects of oil vapor exposure, and the other examining the effects of being submerged in the oil.People were worried about long-term effects, however, and demanded a long term health studybe conducted following their actual health issues through the next few years?. Scientists wereunsure if this would be a long term consequence (luckily, it was not). There was some propertydamage, albeit not a huge scale, especially near Talmadge Creek (the initial starting point of thespill). Homes reeked of benzene, and yards were flooded with oil as it bubbled from thesediments up to the surface. The Calhoun County Department of Health reported an evacuationof 30-50 homes in the area?. A few years later, in 2013, the EPA released a report on the updatedstatus of the river. They explained that the surface oil was completely removed, however, therewas still an estimated over 100,000 gallons of oil trapped in the underlying sediment. This wasproblematic, because they could not easily remove it without adverse impacts to the ecosystem.

Also, sediments move pretty quickly downriver as the river pushes them along. This causedconcern for the sediments reaching Lake Michigan, where the river ultimately ends up 4. Thewildlife in the river was obviously affected heavily, as many fish and insects were killed by thelack of oxygen, as well as birds being covered in oil. It is clear, based on these studies andreports, that the immediate effects of the spill were detrimental, but the long-term effects aremanageable and not extremely consequential.The government response to the spill was quick, although it was a long process. TheMichigan DEQ and the EPA immediately teamed up to solve the issue, as well as clean up thesite. The day of the spill, July 26 2010, the EPA mobilized a team consisting of the MDEQ aswell as local agencies. Meetings began discussing cleanup teams and methods of containment.They had to move fast as the oil quickly approached Lake Michigan, but they were able tocontain it 80 miles from the tributary that flows into the lake. The EPA knew the public wasconfused and angry at the whole situation, and they did a good job at keeping the communityinformed. They held many public forums to update people on the status of the effort, as well asget their opinions on the matter. After declaring it a Superfund site, EPA heavily targetedEnbridge, the oil company responsible for the spill. They issued orders for them to help clean itup, as well as finance a majority of the expenses. By 2013, it was decided that the surface oil wasmostly gone, but the oil in the sediments remained. The solution to this was dredging the soil.Dredging the soil meant using huge net-like mechanisms to disrupt the soil and allow the oiltrapped beneath it to bubble to the surface of the water. Once on the surface, it gets cleaned justlike it did initially.

After the dredging project completed by the end of the year, the EPAdiscontinued its primary involvement with the site, and handed it over to the MDEQ5. TheDEQ’s next steps after being handed the primary oversight position were simple: restore theKalamazoo River back to its state pre-spill. They teamed up with the Michigan Department ofNatural Resources and Governor Rick Snyder to facilitate this plan, which mainly consists ofgiving Enbridge orders on restoration. The restoration efforts are continuing to this day. The governmental response overall was up to standard. The EPA responded the day ofand got a team together to sort the problem out before it got substantial. The trade-off here is thatwhile a lot of wildlife was lost and ecosystems were heavily damaged, the impact on humanswas relatively minimal. It definitely could have been a much worse situation, especially if the oilwould have reached Lake Michigan. That would have caused exponentially worse effects than itdid. The more important question to answer is what preventative measures can be taken to ensurethat this never happens again. Oil spill occurrences have gone way down since the first pipelinesand freighters began transporting it. However, there are still areas where pipes are old andfragile, as well as misinformed pipeline operators (the cause of this oil spill in particular; theworkers thought it was a false alarm at first). The immediate solution to the old pipes problem isan infrastructure upgrading project.

Although costly, replacing 50 plus year old pipes that arewell past their expiration date would prove to exponentially reduce the chance of spills andruptures. The arguably better, large-scale solution would be to start phasing out these old pipesand transition to renewable energy sources in the areas where the oil is ending up. This wouldultimately reduce the risk of a spill to zero. The problem with this solution is that it is long term,and there is still the risk of spills occurring during the transition period. As far as the workerproblem is concerned, automation is an option. The technology exists, and the alarms could bebetter monitored and understood this way as well. The trade-off is a loss of employment forcurrent workers, however. Furthermore, the renewable energy idea can apply to kill two birdswith one stone and get rid of the need for pipeline operators in the first place. This would, again,put them out of employment, but job opportunities in renewable energy would open up, and theirskills would easily translate to this area. Through these prevention options, the risks of oil spills will continue to drop, and will reach zero in the near future. It is a matter of getting policymakers and interest groups on board, and then setting a plan going forward.

The significance of this report is that it shows the observed impacts of a crude oil spill ofthis caliber (diluted bitumen) for further use in the event of a future tar sands oil spill. It alsoevaluates the successes of the governmental agencies in their responses, which provides aframework of how to handle situations like these in the future. The potential prevention solutionswill be relevant in the very near future as the pipes get older and the oil supply gets closer andcloser to complete depletion. 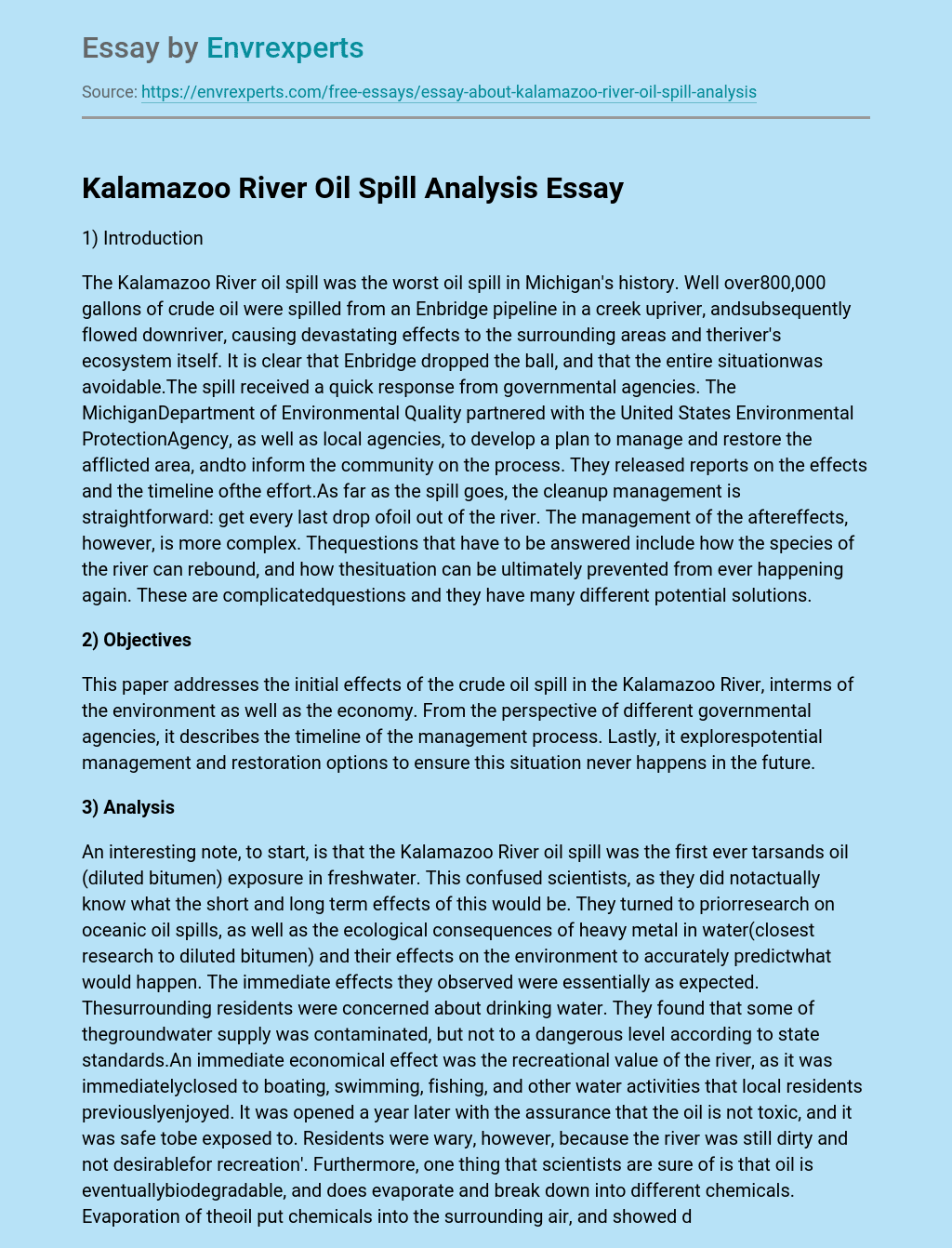