Extreme weather, droughts, heavy downpours and floods are some of the current climatictrends across the globe. These trends are undeniable and it is apparent that the earth is gettingwarmer, the sea level is on the rise, oceans are becoming more acidic and glaciers, polar seaice are melting (Abdelhamid, 2016). To scientists, this is a key concern with questions as towhy it is happening and what is causing this global warming? Consequently, they have spentseveral decades trying to figure out the causative factors of this state through an analysis ofnatural cycles and the primary events that influence climate.

Don’t waste time
Get a verified writer to help you with Key Causes of Global Warming Based on Findings From Varied Researchers and Scientists
Hire writer
$35.80 for a 2-page paper

Based on their findings, we cannow derive an understanding of some of the main factors causing global warming which isgoing to be the primary focus of this paper. The paper is going to focus on outlining some ofthe key causes of global warming based on findings from varied researchers and scientists. Itis also going to avail an in-depth analysis on how the factors outlined lead to global warming.

In 2014, a report by the National Climate Assessment (NCA) committee indicated thatthe sun's heat output over the past 50 years had had no increase in intensity as measured bysensor satellites (USGCRP, 2014). This implies that global warming is not sun induced but israther caused by human activities like combustion of fossil fuel such as coal, gasoline and oilin factories, cars and in the production of electricity.

The combustion of these fuels has overthe past century immensely increased leading to the increased concentration of greenhousegases in the atmosphere and consequently global warming.

An analysis of other naturalfactors like volcanoes also pointed to human factors as the key cause.One of the main causes of global warming is the greenhouse effect. The effect is theprocess by which the atmosphere traps some of the incoming sun's heat thereby making theearth warm (Abdelhamid, 2016). It is a natural process done by greenhouse gases likemethane, nitrous oxide and carbon dioxide under adequate concentration of each of the gases.However, when their concentration increase, they retain more heat thereby making the earthwarmer (global warming). Also, they cannot escape from the atmosphere and will continue trapping more heat leading to the upsurge in global temperatures. The concentration of thesegases is increased by human activities including deforestation and combustion of fossil fuel.Air pollution also plays a key role in facilitating global warming. Factories and vehiclesemit harmful gases which are captured in the atmosphere, smoke, gather up and form cloudscomposed of harmful gaseous components. The clouds then later fall as acid rain which notonly causes diseases and corrosions but also burns and kills plants thereby increasing thelevel of carbon dioxide in the atmosphere (Zhong, 2016). The harmful gases also release heatwhich increases the earth’s temperature leading to global warming.Another human activity that causes global warming is deforestation particularly in thetropical rainforests.

By cutting down trees, the amount of photosynthesis taking place isreduced thereby releasing the carbon dioxide stored in the plants into the atmosphere. Asmore trees are cut down, the carbon dioxide concentration increases and being one of thegreenhouse gases, it diversely affects the surface albedo (reflection of the sun's energy by theearth's surface) and the amount of water vapor released into the atmosphere (Abdelhamid,2016). This will in turn affect the regional temperature will likely increase. According to theWorld Carfree Network, deforestation in the tropical rainforests alone adds more carbondioxide in the atmosphere compared to the summation of trucks and cars on the world' roads.Other human activities that facilitate global warming are industrial advancements, theutilization industrial fertilizers in farming and cattle rearing. As human needs advance withtechnological developments, more and more factories are being set up to generate theproducts to fulfil the emergent needs. These factories need huge volumes of fossil fuels likepetroleum, coal and electricity power for the efficient operation of their machines. Burningthese fuels releases carbon dioxide in the atmosphere which is a key greenhouse gasresponsible for global warming (Abdelhamid, 2016). The use of chemical fertilizers on the other hand has not only been proven to be harmful to human but also the earth as a whole.Most of the artificial fertilizes are enriched with Nitrogen oxide which is far much worse thancarbon dioxide. The nitrogen oxides are capable of destroying the ozone layer faster than anyother greenhouse gas. Their continued usage ultimately leads to the creation of more andmore ozone holes allowing UV radiations into the earth and hence global warming.In addition, the rearing of cattle is also another human activity causing global warming.As prosperity increase, the consumption of meat is also on the rise with a projection over 465million tonnes of global meat production. However, the production of a kilogram of beefleads to an equivalent emission of 36.4 kilograms of carbon dioxide, 59 grams of phosphateand about 340 grams of Sulphur oxide which are the main greenhouse gases responsible forglobal warming (Cummins, 2016).

This stems from the fact that in order to raise the cattle,there is the need for clearing of forests to make pasture and cows are also ruminants emittingan estimated 2 billion metric tonnes of carbon (iv) oxide annually. Nevertheless, a cowreleases an average of 70 to 120 kilograms of methane yearly. Methane is also a greenhousegas and also helps in heat retention on the earth's surface (Cummins, 2016). It is producedwhen bacteria break down organic matter in conditions of limited oxygen but the process alsooccurs in the intestines of herbivorous animals. The increase in demand of meat has led to anincrease in concentrated livestock production and consequently the quantity of methane in theatmosphere leading to global warming.Overpopulation has also led to global warming. Human beings breathe out carbondioxide and with the rapidly increasing population, more carbon dioxide is being releasedinto the atmosphere which consequently lead to global warming. The many people alsodemand more food, transportation, homes and more cars. All these have led to rise in thecarbon dioxide concentration in the atmosphere as well as other harmful gases from vehicleexhaust engines (Zhong, 2016). This has also lead to the release of huge volumes of waste which when burnt in landfills, generates enormous volumes of toxic greenhouse gases whichare absorbed in the atmosphere worsening heat retention and tearing of the ozone layer.

Other causes of global warming are natural phenomena which include the melting ofglaciers and volcanic eruptions. The melting of glaciers, although a result of global warming,is also another activity facilitating it. The process is a natural phenomenon where mountainsof ice melt due to warmer temperature in order to equalize temperatures by beating up heat(Zhong, 2016). However, there is currently an excessive ice melting leading to the emissionof carbon which is greenhouse gases in the atmosphere. The gases in return facilitate themelting of ice leading to increased sea levels and floods. Volcanic eruptions are also majorcauses of global warming. The eruptions contain gases like Sulphur dioxide and dust whichstay in the atmosphere for very long periods of time leading to an interference in the balanceof heat in the atmosphere. In most cases, the gases and dust particles limit the heat reachingthe earth's surface thereby making it cool and therefore contributing to global warming(Zhong, 2016)Natural forest fires also increase the global temperature depending the time in which theyburn. Nevertheless, as vegetation burn, the stored carbon which is a greenhouse gas isreleased into the atmosphere. The gases then trap solar energy leading to global warming.Solar activities are also widely recognized to could be having significant impacts on climatechange. This could stem from irradiance in solar wavelengths and the changes in magneticactivity around the sun.

The magnetic field around the sun deflects cosmic rays from theearth. When the sun dims, the magnetic field drops and the cosmic rays enter deeper into thesolar system with a large number of charged particles entering the earth's lower atmosphere(USGCRP, 2014). The rays then ionize small moisture particles forming low thick cloudsreflecting the sun's rays back to space leading to drop in global temperature.The depletion of the ozone layer is also another factor that causes global warming.Ozone layer is the outside layer of the atmosphere which serves to protect the earth's surfacefrom harmful infrared radiations and ultra violet light (Abdelhamid, 2016). The layer ismainly torn by the entry of harmful gases like chlorofluorocarbons leading to an ozone holeallowing the entry of UV radiations increasing the temperature of the earth thereby leading toglobal warming. This gives an explanation to the melting of the glaciers and the increasingwater levels. The greenhouse gases (methane, carbon dioxide, nitrous oxide), also contributeto the tearing of the layer by working in a combination with the chlorofluorocarbons giventheir heat retention capabilities.Finally, the last cause of global warming is rotation of the earth which is the biggestnatural cause of the problem. As the earth spins, its rotation goes off slightly causing awobble which results in certain areas getting less or more sun radiation affecting thetemperature at the given regions (Zhong, 2016).

Additionally, from within the earth, themovement of tectonic plates could also be a cause of global warming since the movementsaffect the global circulation of air and water patterns as well as the earth's climate. In anutshell, the key causes of climate change are human induced necessitating a vital need foradditional remedies to deal with the problem. The key point of concern should beminimization of the utilization of fossil fuels which is the key contributing factor.

Key Causes of Global Warming Based on Findings From Varied Researchers and Scientists. (2021, Oct 31). Retrieved from http://envrexperts.com/free-essays/essay-about-key-causes-global-warming-based-findings-varied-researchers-and-scientists 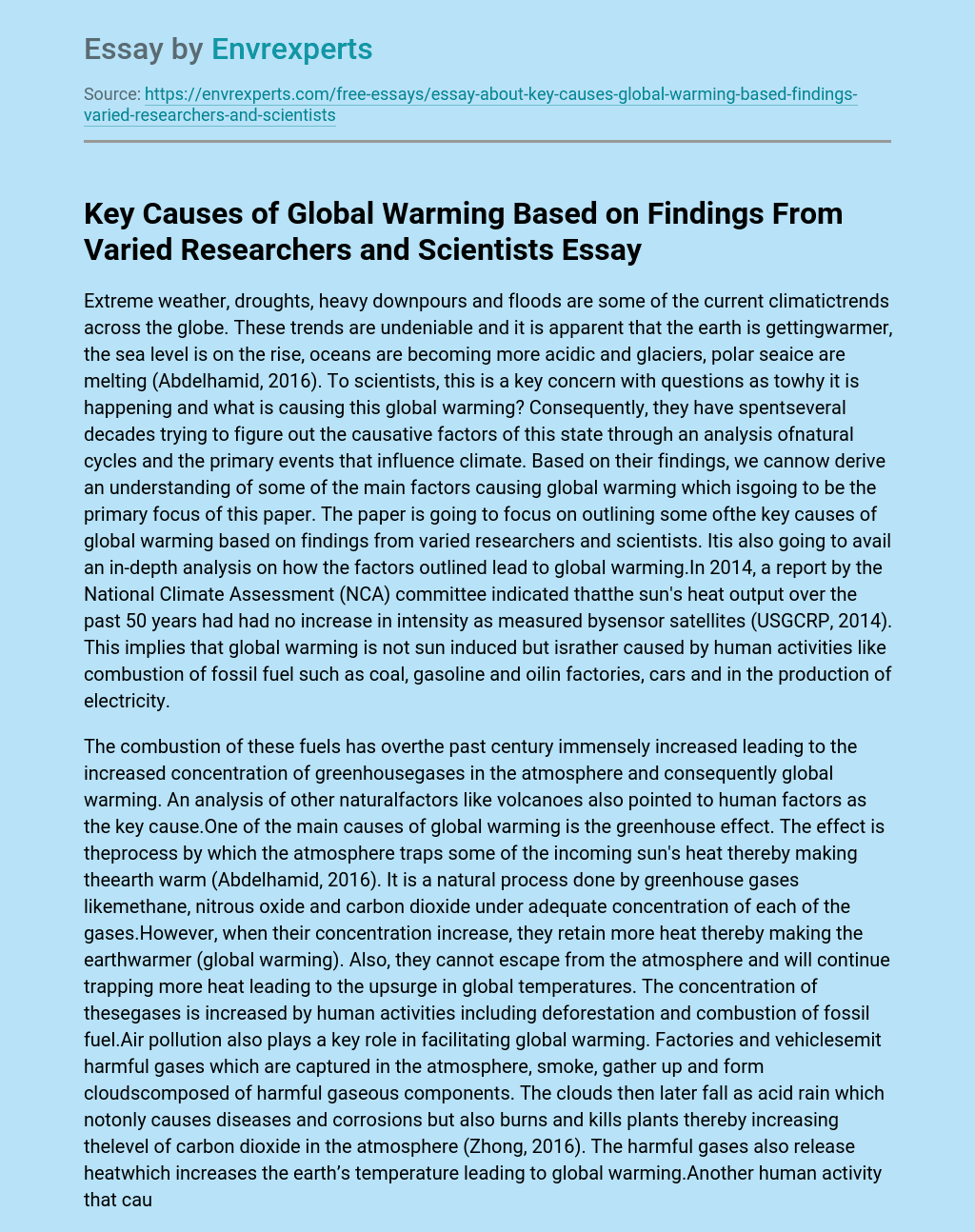