The Legal Prohibition of Crude Oil

After being legally prohibited for approximately 40 years, the United States exported domestically produced crude oil on July 30, 2014. This crude oil export is one of the most significant oil shipments since Congress banned exports in the rouse of the 1974 oil embargo. This oil shipment was only possible because of a process called fracking. Fracking or hydraulic fracturing is a procedure that can increase the flow of oil or gas from a well. It is done by pumping liquids down a well into subsurface rock units under pressures that are high enough to fracture the rock, allowing greater permeability of the stone surrounding it.

Don’t waste time
Get a verified writer to help you with The Legal Prohibition of Crude Oil
Hire writer
$35.80 for a 2-page paper

The proppant (small crush-resistant particles that are carried into the fractures by the hydraulic fracturing fluid) fills the small cracks created by the water to keep them open after the water flows back out. The chemicals, such as gelling agents, are used for a variety of purposes, most importantly to gel the water on its entry so that the proppant remains suspended in the mixture and does not sink to the bottom.

The chemicals also added into the water to reduce friction, keep rock debris suspended in the liquid, prevent corrosion of the equipment, kill bacteria, and control the pH and other functions. The goal is to create a network of interconnected fractures that will serve as pore spaces for the movement of oil and natural gas to the well bore.

Before the process of fracking was discovered the traditional way of extracting crude oil was drilling. Geologists would first identify a section of land they believed had oil flowing beneath it.

The most frequently used method to identify the oil include satellite imagery, gravity meters, and magnetometers. Once the underground stream of oil has been found the drilling can begin. After drilling into the ground and a steady flow of oil has been identified at a certain depth a perforating gun is lowered into the well. This gun has explosive charges within it allowing the oil to flow through the holes of the casing. Then a tube is run into the hole allowing the oil and gas to flow up the well. However, fracking has been under major scrutiny by environmentalists and other critics who want fracking banned for its supposed negative impacts. In spite of this, fracking has numerous advantages compared to the alternative forms including the economy, environment, and foreign affairs making it far too important to be banned.

Although there are many alternatives to fracking, fracking is by far the best option and here is why: the alternatives include surface processing or surface retorting which involves three steps. The first step begins with the mining of the oil shale- can be done using traditional mining methods (open pit mining or underground mining). The next two steps entail thermal processing or retorting above ground, processing of the shale oil to obtain a refinery feedstock and value-added by-products, and lastly the disposal of the spent shale. However, this process of mining for oil has many disadvantages including a large land impact and consumption of large amounts of water (as the process requires water for operations and also requires pumping out groundwater to prevent flooding of the mines). The open pit or underground mining methods are regarded as ineffective because an estimated one-third of the resources are left behind in the pillars (unmined) areas. In fact, the thicker the resource the less efficient the mining process will be. Also, the disposal of waste shale is a major problem for some processes requiring large quantities of water to dispose of the shale. Other alternative processes include photovoltaic solar and wind power which use almost no water and emit no greenhouse gases but because of the cheap abundant amount of natural gas their deployment as new sources of electricity are limited. Additionally, coal nuclear and oil extraction use approximately 2, 3, and 10 times more water compared to fracking per energy unit and corn ethanol can use up to 1000 times more water compared to fracking.

Other than being the best option to obtaining more natural gas and oil, fracking has many beneficial factors specifically concerning the economy which entails employment rates, gas prices, and a decreased dependence on foreign countries for oil. Proponents of fracking have hailed it as a major development in the energy industry, which has allowed for the tapping of reserves of gas and oil that were originally excessively difficult to reach. In 2011, the United States produced 8,500,983 million cubic feet of natural gas from shale gas wells. Taking an average price of $4.24 per thousand cubic feet, the value comes out to be around $36 billion, thanks solely to shale gas. This new energy renaissance created as a result of fracking is starting a surging domestic production that is driving our energy security and creating large benefits for consumers. Over the last five years, nearly every barrel of new U.S. production can be attributed to the use of horizontal drilling and hydraulic fracturing technologies, and that production is reshaping global markets in a way that is strengthening the U.S. both economically and diplomatically. Without, these technologies, ICF international has estimated that international crude oil prices per barrel would have averaged $122 to $150 in 2013- an increase of $12 to $40. In total, U.S. consumers saved an estimated $63 to $248 billion in 2013. The study by ICF international also found that the utilization of horizontal drilling and hydraulic fracturing equaled 4.78 million barrels per day in 2013, which is responsible for 48% of all production (up from 11% in 2008), meaning the average U.S. household saved about $1,200 in 2012 from unconventional production of both oil and natural gas, an overall savings of around $163 billion.

The Legal Prohibition of Crude Oil. (2021, Oct 31). Retrieved from http://envrexperts.com/free-essays/essay-about-legal-prohibition-crude-oil 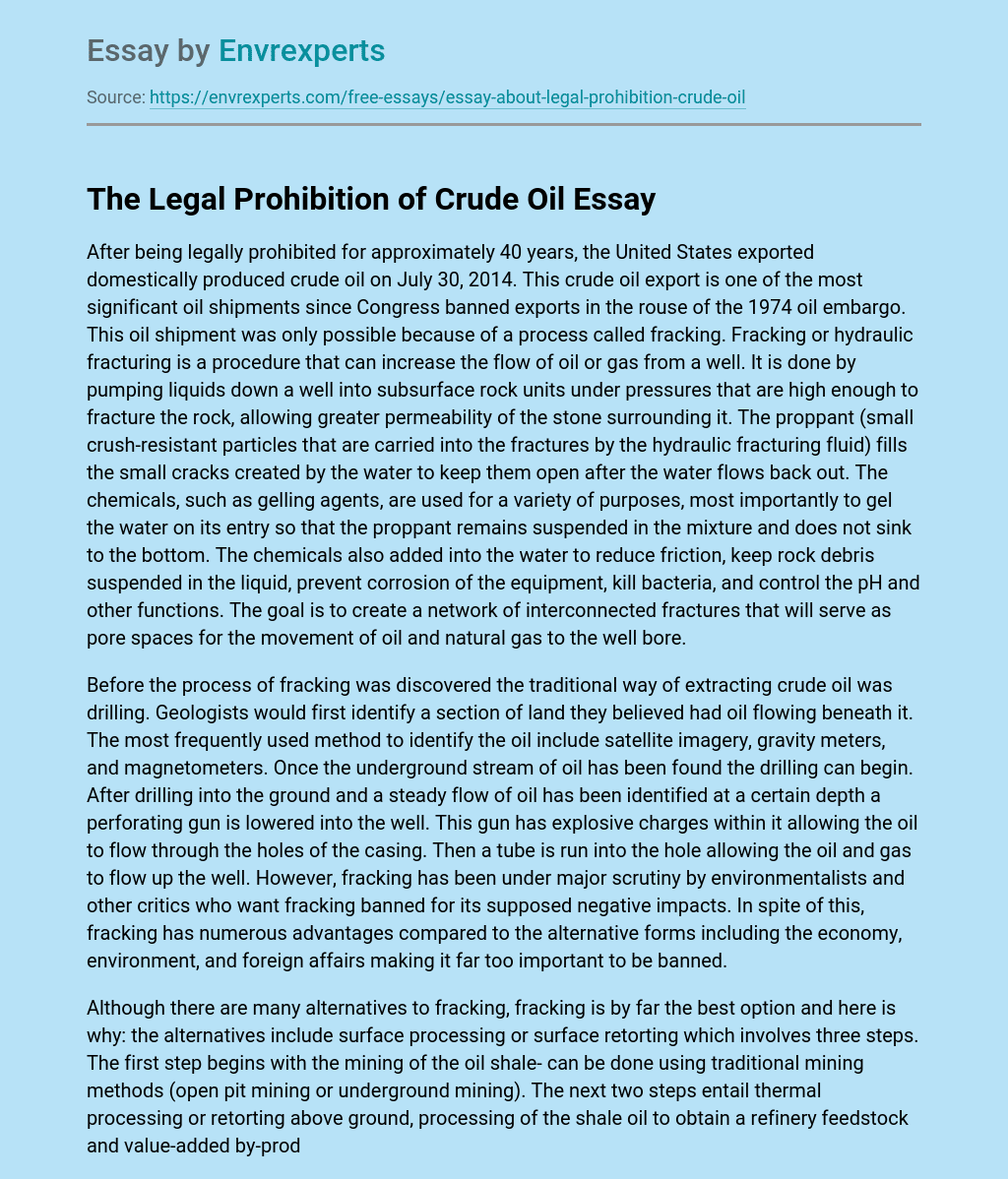