Most pesticides are manufactured compounds that are designed to kill specific pests, such as weeds and insects. Many pesticides have the potential to harm non-target organisms, especially if the organisms are exposed to high levels or for a long period of time. In the early 1960s, Rachel Carson's widely publicized book "Silent Spring" described the ecological impacts of DDT and other pesticides. Concerns about the unintended effects of pesticides continue to this day, and evaluation of the risk to humans and the environment from present-day levels of pesticide exposure remains highly controversial.

Don’t waste time
Get a verified writer to help you with A Literary Analysis of Book “Silent Spring”
Hire writer
$35.80 for a 2-page paper

Since the beginning of farming, pests, including insects, plant pathogens, and weeds, have been problems for farmers. Presently despite all the control efforts used, pests annually destroy about 40 to 50 percent of all crops worldwide. (Encyclopedia Britannica, 15th Addition, Volume 19) With so many areas of the world facing famine, researchers are attempting to reduce this loss by improving pest control. Even though this is a great concern, we humans must remember the dangers involving the use of pesticides and herbicides.

These chemicals contain toxic materials that pose both environmental and human health risks. Humans, animals, aquatic organisms, and plants can be severely threatened by pesticides and herbicides.

The effectiveness of a pesticide as well as the hazards depends largely on how long the pesticide remains in the soil. For example, DDT, a chlorinated hydrocarbon, has a half-life of three years in cultivated soils, while organophosphorus insecticides persist for only days or months. Chlorinated hydrocarbons persist longer in soils having a large amount of organic matter, although more of the chemical must be applied to these soils to kill pests.

Insecticides persist longer if worked into the soil than if left on the surface. Herbicides applied to soils may not persist at all or may persist up to two years or longer, depending on the compound. Simiazine is one of the most persistent herbicides. Eventually, all pesticides disappear because of evaporation and vaporization, leaching, plant uptake, chemical and microbial decomposition, and photodecomposition. (Encyclopedia Britannica, 15th Addition, Volume 19)

Pesticides are absorbed into plants through the leaves or are absorbed with water through the roots. Pesticides that find their way into our water supplies and produce can be categorized as nervous system poisons, carcinogenic, or endocrine system disrupters. (http://www.geocities.com) Large amounts of illegal pesticides are being consumed in imported foods such as peas, apples, miscellaneous berries, and pears, which are the most toxic. Pesticides at too high of levels are being found in baby food that are. Some overuse of pesticides may also promote mutations in organisms, originally deterred by the pesticide, causing it to be immune to it and forcing us to manufacture even more toxic chemicals.

For centuries, agricultural weed control was accomplished with a plow or hoe. Eliminating competing weeds by hand or by cultivating or tilling, however, is time-consuming and expensive, and limits the area that can be farmed. A major breakthrough in weed control did not take place until the 20th century, in the 1940s, when the first synthetic herbicides were developed.

They are many methods to minimize the dangers of using pesticides and herbicides. One is through organic farming. Organic farmers do not use any herbicides to kill weeds. Instead, they do all the weeding by tractor and by hand. Because weeding is very labor intensive, organic farmers try to do everything possible to limit the amount of weeds that germinate when they farm. They are careful not to let weeds flower and therefore spread more seeds. Gradually, over two to three years, the weed populations are reduced. Another method that organic farmers use is drip irrigation whenever possible. Drip irrigation distributes water close to the plant line, whereas overhead irrigation covers 100 percent of the field, causing more weeds to germinate.

Pest control is a big challenge for organic farmers. First they try to anticipate in advance where and when different pests will be present. They adjust their planting schedules and locations as much as possible to avoid serious pest pressures. Their main strategy to combat harmful pests is to build up a population of beneficial insects, because the larvae of the beneficial insects feed off the eggs of pests. The key in building the organic farmers population of beneficials is to establish borders around their fields called host crops. (www.geocities.com/South Beach/Boardwalk) Another extremely important function of these borders is that they serve as a trap crop for pests. (www.geocities.com/SouthBeach/Boardwalk) They distract pests from the crops by providing them with an alternative food supply. 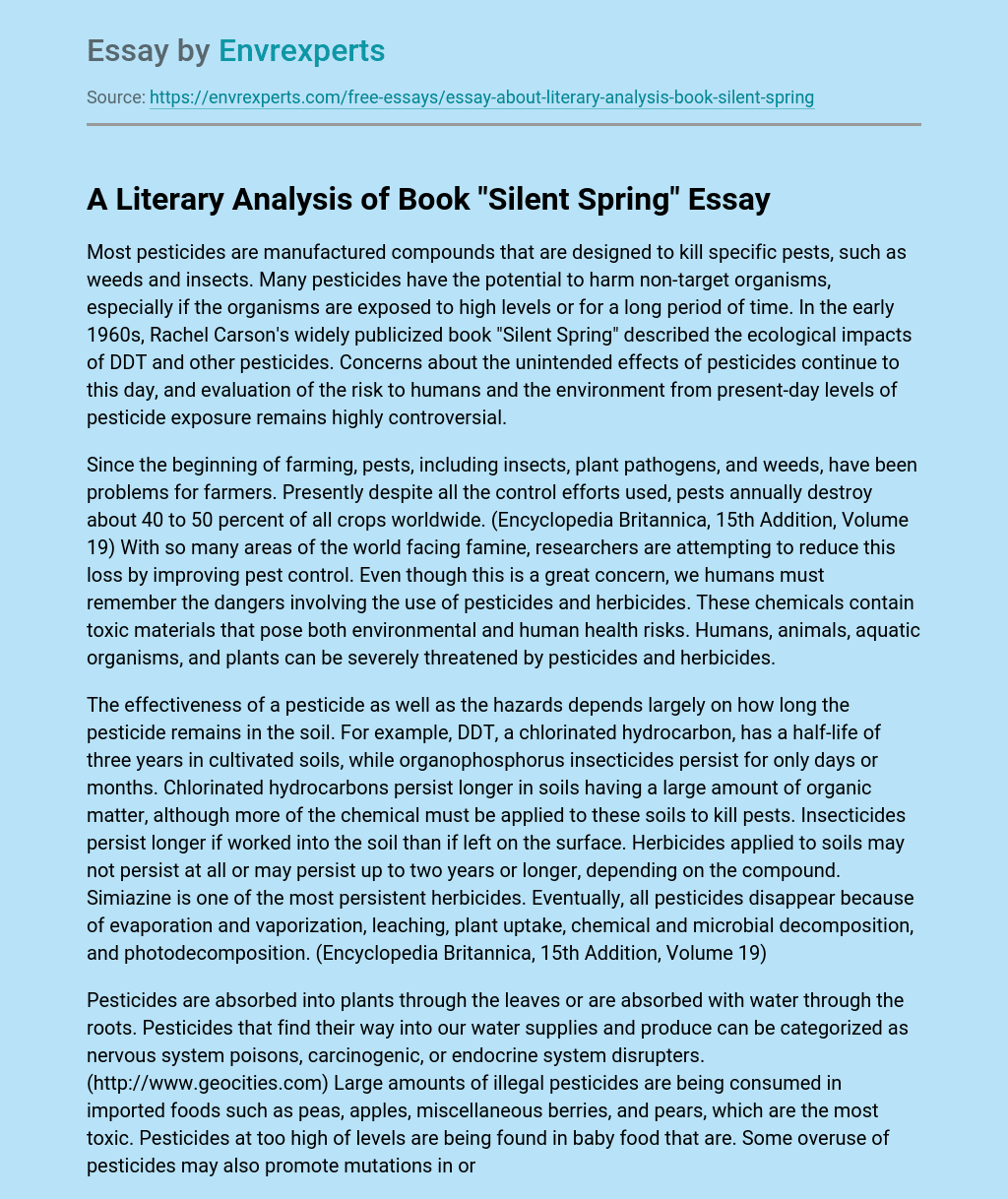