A Literary Analysis of Thinking Like a Mountain by Aldo Leopold

In Thinking Like a Mountain, the author, Aldo Leopold, writes of the importance of wildlife preservation through examples of the symbiotic relationship of animals and plant-life with a mountain. He asks the reader to perceive the processes of a mountainous environment in an unusual way. Aldo Leopold wants the reader to "think” like a mountain instead of thinking of only the immediate, or as the hunter did. Taking away one feature of an ecosystem may eventually destroy everything else that that environment is composed of.

Don’t waste time
Get a verified writer to help you with A Literary Analysis of Thinking Like a Mountain by Aldo Leopold
Hire writer
$35.80 for a 2-page paper

Nature and wildness is essential for the well being of life on this earth.

The excerpt begins by telling of the echoing sound of a wolf's cry. Every creature has a different perception of the meaning of that howl, while the mountain has a different view as well. A deer might be alarmed by it and flee. A hunter may become more alert and trigger-happy. All the while, it's a comfortably soothing sound for the mountain.

Leopold goes on to explain his experience as a hunter and the only time he killed a wolf. He saw the fire die in the wolf's eyes and later realized what he had done. Before, like most hunters, he thought that by killing the wolves off there would be more deer in return. Therefore, there would be more game for the hunters. Leopold writes, "I thought that because fewer wolves meant more deer, that no wolves would mean hunter's paradise. But after seeing the green fire die, I sensed that neither the wolf nor the mountain agreed with such a view.

" Prior to this event, Leopold never thought to consider the destructive, long-term effects that could be made by reducing the wolf species on the mountain. He had been overtaken by the idea that hunting was sport and sport meant accomplishments, but on that one day he realized that his sport was disrupting the flow of an entire system of life.

There is a symbiotic relationship between the wolves, deer, and plant-life on many mountains. The small amount of wolves feed off of the deer, and the deer feed off of the vegetation. By reducing the number of wolves, the deer population rises respectively. With that, the vegetation reduces enormously. All of the edible plants that gives the mountain it's breathtaking color and beauty are destroyed. Habitats for many insects and animals are ruined. Leopold describes this tragedy occurring on several mountains he has visited and relates it to "someone giving God a new pruning shears." This assembly line affect is described in Leopold's essay when he writes: just as a deer herd lives in mortal fear of its wolves, so does a mountain live in mortal fear of it's deer. He proves an excellent point when he illustrates the 2-year time of replacement for a deer, while a range of plantlife may take as long as decades to be replaced.

The selection comes to a concluding point towards the end. This is that safety and comfort during the present may lead to devastation in the future. Leopold ties together the goals of the cowman and even politicians, to do what is convenient and not look ahead. Cowmen stop the wolves from doing their job, which is "to trim the herd to fit the range." As an outcome, we now have dustbowls and even less vegetation. All the while, this destruction of wilderness is a convenience that brings "peace in our time."

We as humans, as visitors from the industrial world into the natural world, need to be taught the ways of land and the ways of life. We have distanced ourselves from nature for so long that we need to relearn the rules. We think we can walk right back into the natural world, establish what we believe to be ideal, and then re-make the rules to benefit ourselves. I think we humans are mistaken. I believe it is possible for us to slowly step back into the circle of life and make ours, and the natural world's one. Maybe this could one day be possible by creating a world where large tracts of wilderness would be protected. Where wild things would thrive and be honored in many other places as well: in rural wood lots, in wetlands, in restored prairies, even in urban parks. This would enable us to be reminded, regularly and in the most ordinary ways, of the larger community to which we belong and on which our own lives depend.

This essay moved me in its ability to capture and open my mind as to how idiotic humans can be just for comfort and convenience. Leopold writes so effectively of the value of protecting wild land and the creatures that inhabit it, including people. It's almost as if this essay is a plea to preserve the world's last remnants, because we have already lost so much. Why does he feel such a need for preservation? , I asked myself. I came to realize that because of his influential effect on the environment movement, Leopold had to be in love with the aesthetic and spiritual aspects of what nature can give to those who are willing to receive. I understand this completely because I too am in love whole-heartedly with wilderness and believe that these are the places that have touched me most deeply

To "think" like a mountain, you need to consider a different perspective than normal. You have to be mature, think objectively, consider others before yourself, and most importantly, you are obligated to think about the future. The natural world is an entity, with a pulse that reverberates through all living organisms. By taking away one aspect of the mountain terrain, you may be wiping out a possible necessity for the environment to survive. This is what he defines as the hidden meaning behind the howl of the wolf. Humans need to open their eyes and realize that there is a meaning and place for everything that is natural in the wild. Leopold summarizes this thought at the end of the excerpt with Thoreau's famous line: In wildness is the preservation of the world.

A Literary Analysis of Thinking Like a Mountain by Aldo Leopold. (2021, Oct 31). Retrieved from http://envrexperts.com/free-essays/essay-about-literary-analysis-thinking-mountain-aldo-leopold 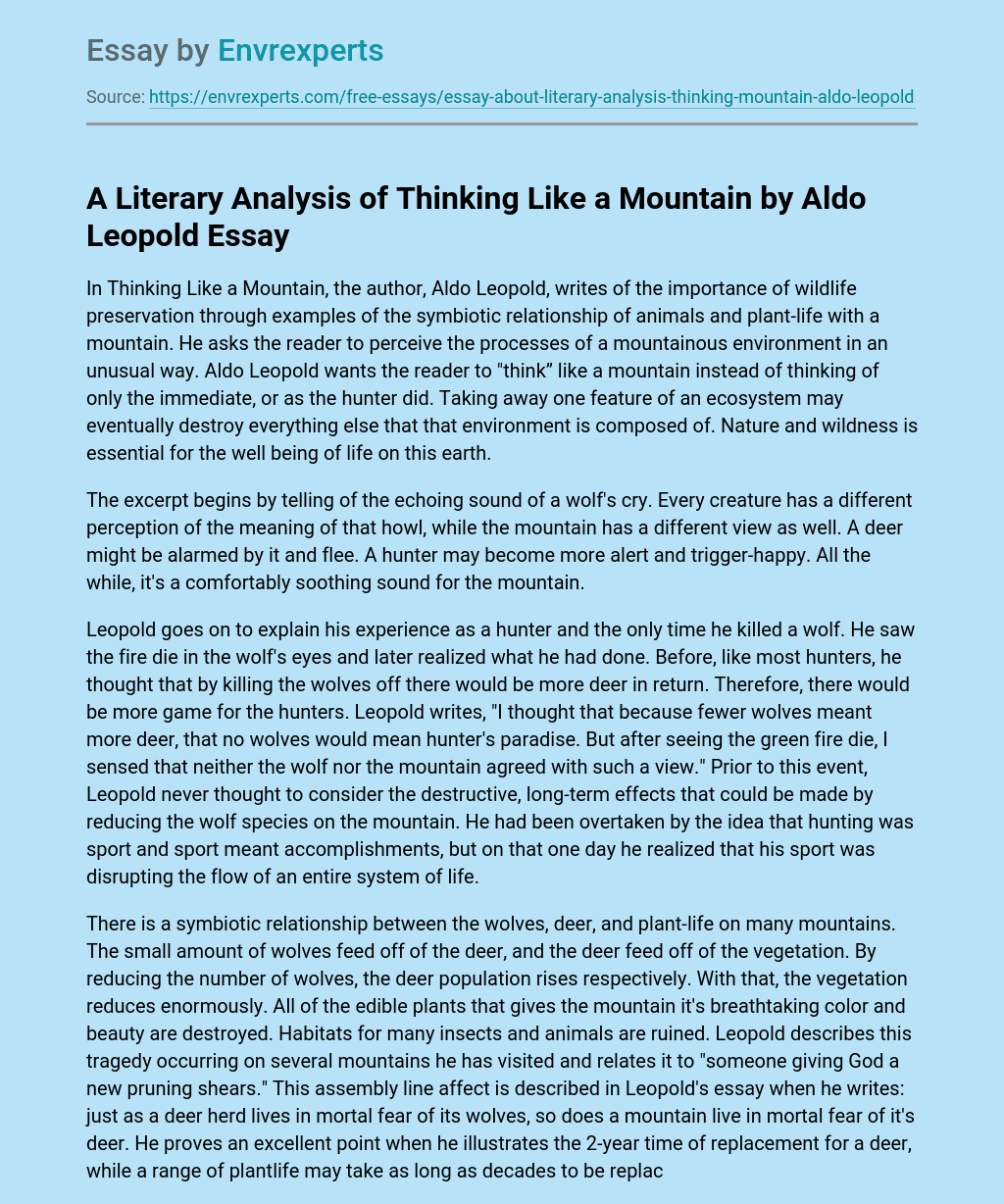