A Look at the Different Issues of Climate Change

Time and time again when the intellectuals of our day and age are asked to list issues that need to be addressed; be they politician, actor, scientist, or comedy show host, the issue of Climate Change rears it's often misunderstood head. To begin getting a complete understanding of Climate change, and remain informed so we can act accordingly for the betterment of the human race, we must analyze the topic of climate change through several lenses. Historically, climate change or global warming as it was originally called has been an issue that has seen disproportionate action to it's gravity.

Don’t waste time
Get a verified writer to help you with A Look at the Different Issues of Climate Change
Hire writer
$35.80 for a 2-page paper

It is my belief that by gaining a complete understanding of an issue as complex and divisive as Climate change we as a species can resolve other conflicts by applying some of the same tactics and thought process. Understanding first implies context and the best way to get context is to look at how a topic is addressed from a multitude of viewpoints over a varied amount of time.

History is an important informer of context but it is important to also factor into our constructed context the inherent biases of sources as well as the biases we hold as viewers/ consumers of media and users of sources for the purposes of information.

Politically Climate Change is often buried in a mountain of other voting issues that cost states and voters less to act on and are more entertaining to debate. Among the scientific community there has been a multitude of scientific studies and experiments verifying the impact and causes of Climate Change, however in the wider public the idea that more scientific study is needed before action is taken has somehow taken root and such misinformation is more comforting to image than the idea that the time to take action has passed and we must weather the consequences.

The media representation of Climate change varies widely between sources and may be the only or primary cause of the prevailing public opinion that climate change is not an issue. Of course simply looking at all the potential viewpoints of such a complex issue isn't enough to have a complete understanding. We need to interrogate the assumptions that we make about the issue in order to understand how some viewpoints are held. Doing this will help us understand the actions of those not in the know in regards to this issue. Looking at assumptions will help bring light to the uninformed opinion that fuels shockingly ridiculous displays of idiocy like holding/throwing snowballs in a senate chamber as if the very existence of snow is somehow proof that climate change isn't serious.

With a greater understanding of the facts available through accurate sources and the willingness to check those sources for their inherent biases we can best formulate our own opinions on the matter of Climate change. Personally I share the opinion of a vast majority of scientists some politicians and a few notable comedic hosts out in the world that Climate change is a serious, world affecting issue in life and we need to take action not to offset climate change but instead to adapt society to the effects of climate change. Simply put it is my opinion that we have taken too long to decide on a course of action that would allow us to escape climate change and with that permanence in mind we need to take action to ensure that the effects that climate change will have on us, namely an increase in natural disasters, prolonged drought and flood periods, increased tectonic activity, unusual weather patterns, and the slow but inevitable change in the literal climates of areas that humans settle.

Historically the issue of Climate change has seen its shifts in more than just name. Politically in the times of the Bush administration climate change was seen in the eyes of the stereotypical conservative republican mindset as a useless talking point and scare tactic used by democratic senators and incumbents to pad speeches. As time went on and more study rightfully went into the topic it was seen as a more solid voting issue and those with the proper foresight urged time and time again that this issue wouldn't go away even if people claim it was a myth or not scientifically proven. At this point in time the general societal feeling towards global warming as a result of the lack of media coverage and general disinterest can be summed up as widespread ignorance with a hint of concern. Time and study went on and those in support of legislation to act on Climate change were seen as people willing to waste government and state funds while those who became more educated as media coverage began to see the issue of Climate change as a sneaky hidden danger. Years passed and under the Obama administration all the requests from previous years for scientific study were answered, a widespread consensus among scientific communities was that drastic action had to be taken immediately to limit, not stop, the effects of Climate change. These pleas were ignored but Climate change entered political debate more seriously and politicians started seeing it as more than a point to propose alternative energy off of. Public opinion of Climate Change has shifted to two distinct views. One which mirrors my own places an importance on adapting to the inescapable effects of Climate Change. The other, however is of the belief that since evidence shows climate change has occurred in the past that it is a natural process and the hysteria around it is a result of a manipulative media and political lobbying and that the world will be fine without drastic action.

A Look at the Different Issues of Climate Change. (2021, Oct 31). Retrieved from http://envrexperts.com/free-essays/essay-about-look-at-the-different-issues-climate-change 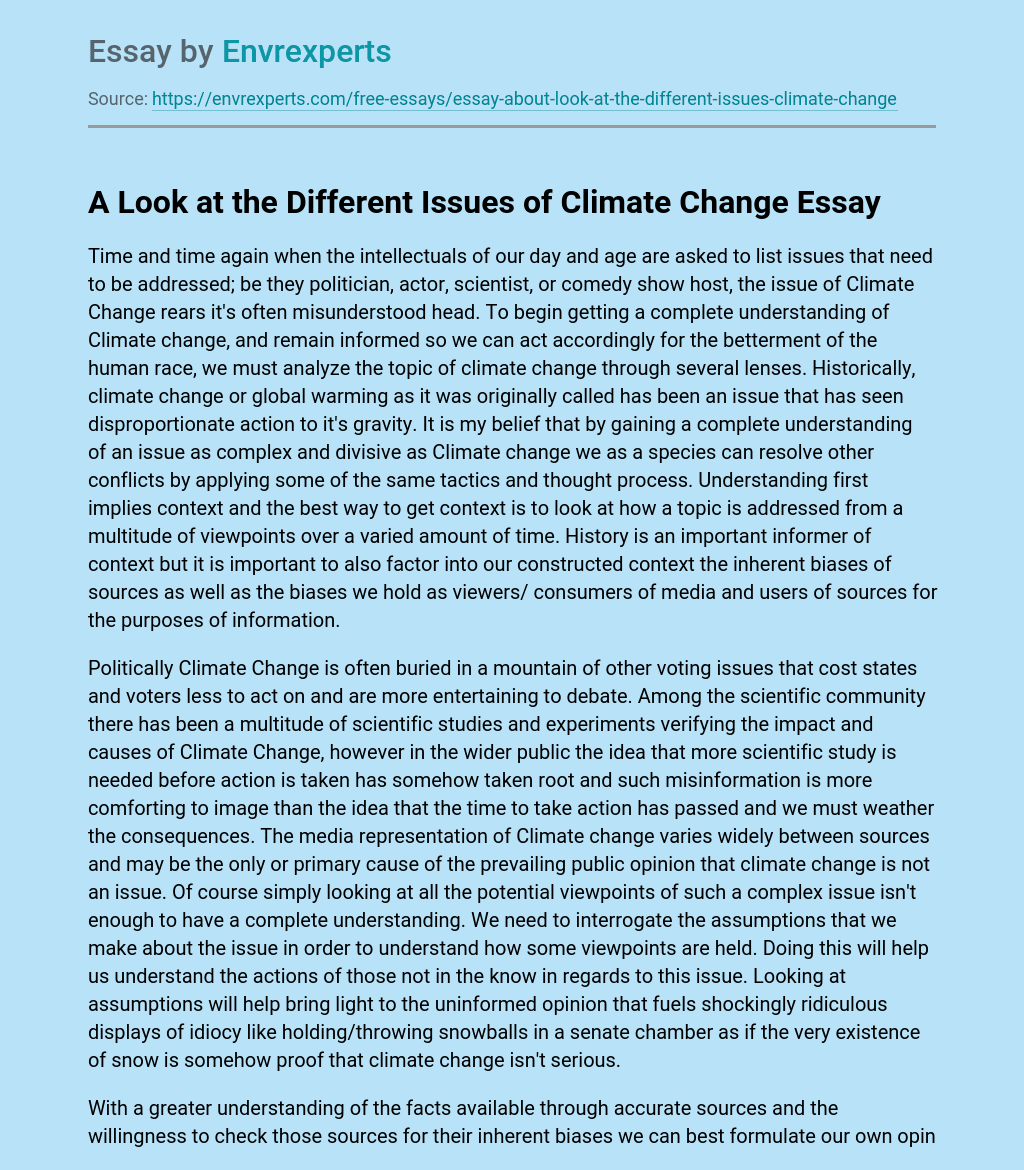