A Look at the Case and Effects of Water Pollution

Water pollution progresses every day in our lakes, oceans, rivers, and other bodies of water that we see and use in many ways. Water is essential for all living things to survive, yet people still pollute it. It s pretty sad to be taking a trip to the beach with your family and you get there to see a sign that says the beach is closed. Or not being able to eat a fish because it s diseased from pollution. Not all pollution is deliberate though, the definition of marine pollution according to the Group of Experts on the Scientific Aspects of Marine Pollution ( GESAMP), is "Introduction of man, directly or indirectly, of substance or energy into the marine environment resulting in such deleterious effects as a harm to living resources, hazard to human health, hindrance to marine activities impairment of quality for use of sea-water, and reduction of amenities" (Michaels).

Don’t waste time
Get a verified writer to help you with A Look at the Case and Effects of Water Pollution
Hire writer
$35.80 for a 2-page paper

There are many natural causes for pollution too.

One cause for marine pollution is fossil fuel spills. Most oil spills are reported to be "accidental", but a majority of the time, they really aren t. Usually the oil slicks are caused by "intentional discharges from ships at sea", who risks the chance of being fined so they don t have to pay the fee for using waste reception facilities in the harbor (Parmentier). Basically, with the lack of care for our environment, ships pollute the oceans with oil that does major damage to the water and organisms that live in it.

It has caused many beaches to close and animals to be endangered. Although there are many oil spills that are deliberate, there are some that are not. For instance, the wrecks of the tanker Amoco Cadiz in 1978 and the Exxon Valdez in 1992 (Water Pollution).

Wind and rain beating down and wearing away topsoil, erosion, contributes to pollution also. "Soil and silt (a fine sediment" washed away from logged hillsides, plowed fields, or construction sites, can clog waterways and kill aquatic vegetation" ("Pollution"). It wouldn t take much slit to destroy a wanted fish species. Like when the protected cover on hillsides is removed from logging and soil and slit is washed into streams, across the gravel beds used by trout and salmon when they are spawning. Soil particles carried to a stream bed, lake or ocean, sediment, can also cause marine pollution. Sediment from croplands, strip mines, and roads can damage a lake or river by providing too many nutrients ("Water Pollution"). This may lead to eutrophication, which can cause the death of fish and other aquatic life.

Sewage, industrial waste, and agricultural chemicals such as fertilizers and pesticides play the biggest role in water pollution. Rainwater runoff can carry chemicals used to kill animals and plants into streams polluting them. There is biodegradable and nonbiodegradable chemicals among these. Nonbiodegradable chemicals are much worse because they can stay there and remain dangerous for a long time. An animal that eats a plant with chemicals on it, can pass the chemicals to another animal further up the food chain. The further it travels up the food chain, the more the concentration of the chemicals increase. "Animals at the top of food chains may, as a result of these chemical concentrations, suffer cancers, reproductive problems, and death" (Water Pollution"). The Environmental Protection Agency (EPA) reported that in 1995, approximately 37 percent of the countries lakes, and about 36 percent of its rivers, are too polluted to be used for swimming or fishing throughout the entire year (Pollution).

Water pollution is very harmful to our environment. It contaminates what we drink and depend on, and what many animals live in. There are many causes for marine pollution, and many of them could be reduced if humans try, but many people don t. Maybe if people knew more about what cause water pollution, then they would know more about what to do to help it. The major causes for marine pollution are oil spills, erosion, and sewage, industrial waste, and agricultural chemicals.

A Look at the Case and Effects of Water Pollution. (2021, Oct 31). Retrieved from http://envrexperts.com/free-essays/essay-about-look-case-and-effects-water-pollution 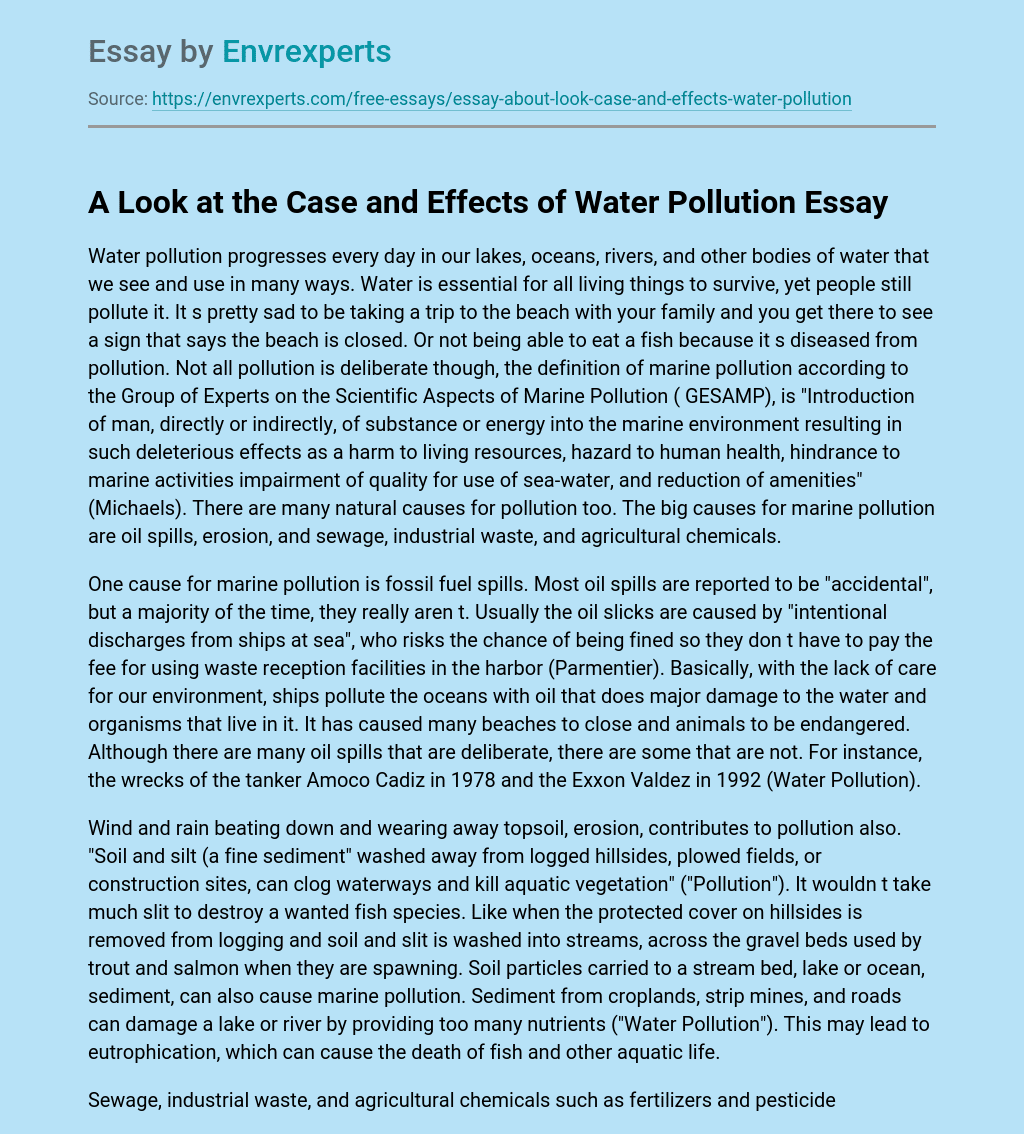