There are many risks to our planet. From nuclear war to catastrophic natural disasters, lit erature and film are ripe with examples of civilization-ending, apocalyptic events. However, there is another, much more grave threat to Earth. Climate change poses a very real and very dire risk to our planet. In this essay, the causes and consequences of climate change will be examined and explained.

Despite the "controversy" surrounding the issue of human contribution to climate change, the scientific evidence is clear: human actions are altering the global climate by the emissions of greenhouse gas, thus trapping light inside the atmosphere, raising the global temperature.

Don’t waste time
Get a verified writer to help you with A Look at the Causes and Consequences of Climate Change on Our Planet
Hire writer
$35.80 for a 2-page paper

The most comprehensive study on human contributions to climate change concluded, “The combined radiative forcing … and its rate of increase during the industrial era is very likely to have been unprecedented in more than 10,000 years. The carbon dioxide radiative forcing increased by 20% from 1995 to 2005, the largest change for any decade in at least the last 200 years.

However, humans are not the only contributors of gas expulsion into the atmosphere. Natural factors contribute to climate change as well. The largest natural forcings are results of large volcanic eruptions. Volcanic eruptions expel large amounts of gases into the atmosphere. Even non-erupting volcanoes emit significant amounts gas from various surface vents. As Clive Oppenheimer, Professor of Geology at Cambridge, explains, “Volcanic gas emissions are by no means inert…in their direct and indirect effects on the Earth's heat budget.” As these gases leak into the atmosphere, they oxidize, turning into aerosol which can severely hamper the ability of visible light to leave the atmosphere, once it has entered.

As the difference between the absorbed shortwave radiation and emitted long wave radiation decreases, increases the net temperature of the Earth. (Oppenheimer, 2007)

If climate change is occurring then, through causes both artificial and natural, what are the consequences? The IPCC described multiple direct, potentially devastating, consequences of greenhouse gas emissions. They state, “Warming of the climate system is unequivocal, as is now evident from observations of increases in global average air and ocean temperatures, widespread melting of snow and ice, and rising global average sea level.” Even small rises in sea levels can have disastrous consequences for coastal cities. National Geographic explains, saying “As sea water reaches farther inland, it can cause destructive erosion, wetland flooding, aquifer and agri cultural soil contamination, and lost habitat for fish, birds, and plants…hundreds of millions of people live in areas that will become increasingly vulnerable to flooding. Higher sea levels would force them to abandon their homes and relocate.”

Climate change and an increasing global temperature, then, have clearly disastrous conse quences we would do well to avoid. Of course, it is humankind's very actions that are, at the very least, accelerating the problem at an exponential rate. There is a very clear cause and effect rela tionship between our collective actions, and climate change, which in turn has its own dire con sequences. In order to slow down, and maybe even reverse global temperature increases, we must first acknowledge it is our efforts that are causing these climate effects.

A Look at the Causes and Consequences of Climate Change on Our Planet. (2021, Oct 31). Retrieved from http://envrexperts.com/free-essays/essay-about-look-causes-and-consequences-climate-change-our-planet 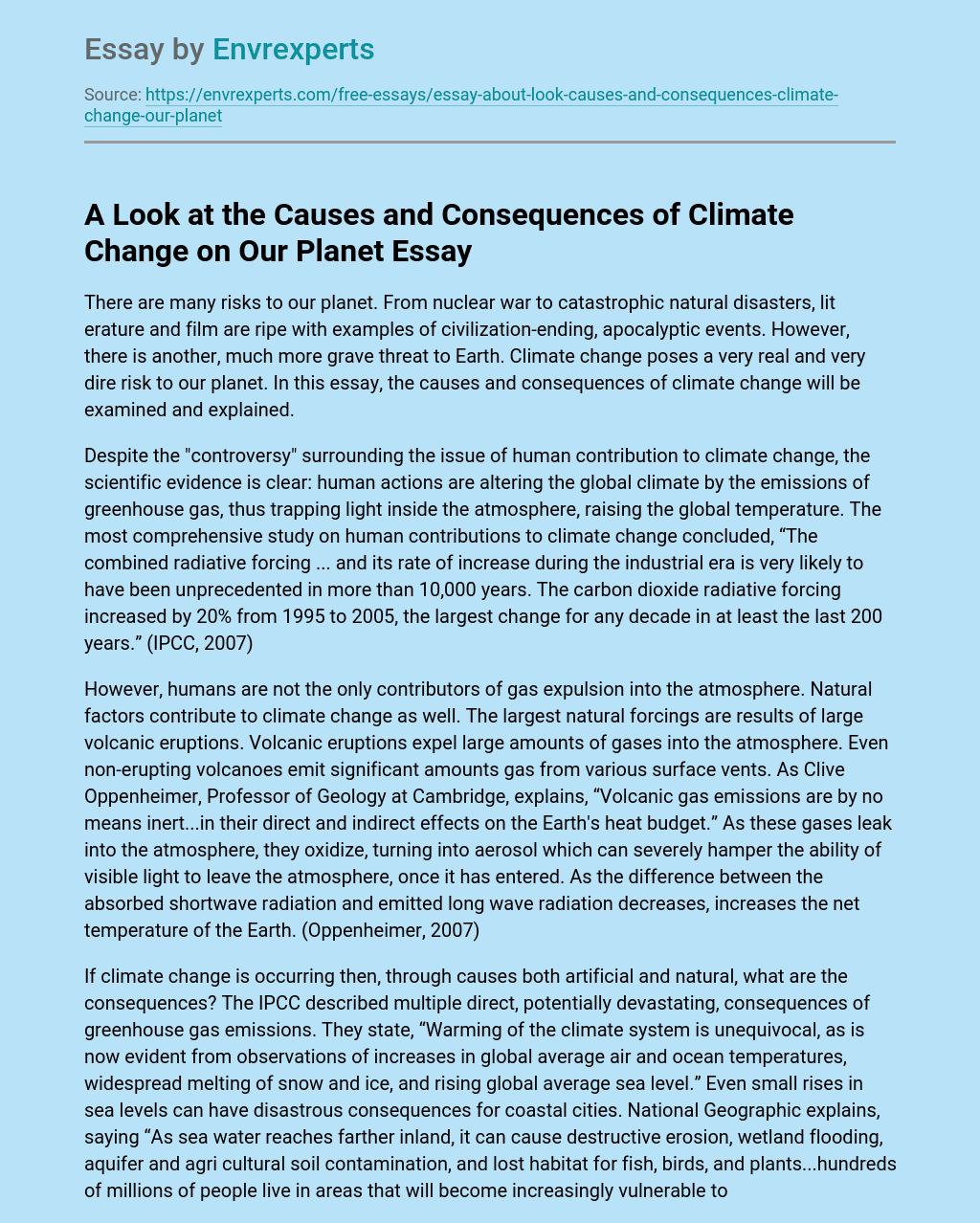