On March 15, 1979, the British Tanker Kurdistan, owned by the Nile Steamship Co. Ltd. of Newcastle, England, was bound from Point Tupper, NS, to Quebec City loaded with 29,662 tons of "Bunker C" fuel oil. At 2:20pm, when situated 50 nautical miles northeast of Sydney, Cape Breton, the tanker, lashed by gale force wind, in ice-infested water, developed vertical gashes below the waterline in the number 3 wing tanks. These tanks, which had a total capacity of 10,000 tons, soon began to leak oil.

Don’t waste time
Get a verified writer to help you with A Look at the Environment Impact of Waste Disposal Along the Nova Scotia Shorelines
Hire writer
$35.80 for a 2-page paper

Surveyors onboard the Coast Guard vessel Sir William Alexander, which was dispatched to assess the Kurdistan's damage, advised the tanker to slowly proceed to Sydney, the nearest port of refuge. However, a short time later the Kurdistan split in two, spilling 7000 tons of oil from the number 3 tanks into the turbulent water. Surprisingly, the two sections of the vessel remained intact, and neither leaked any oil. In a daring rescue, all of the 41 crew members were removed from the stern section by the Sir William Alexander.

The stern section, including its cargo, was towed to the Port Hawkesbury Harbor. Eventually 15,300 tonnes of oil was heated and pumped from the stern section into a chartered Gulf Canada tanker at Mulgrave, NS.

The first reports of shoreline oiling came two weeks after the breakup.

The east coast of Cape Breton Island, portions of the eastern mainland of Nova Scotia as far south as Lunenburg County, and the south coast of Newfoundland were oiled during the next two and a half months. An estimated 880 km of Nova Scotia shoreline were manually cleaned over the summer months.

Readily accessible areas along the south coast of Newfoundland from north of Port-Aux-Basques to Portugal Cove were also cleaned.

By mid-September, 1979, most of the cleanup of Nova Scotia beaches had been completed although spots of re-oiling still occurred from time to time.

The British Tanker Kurdistan, was owned by the Nile Steamship Ltd. of Newcastle, England and was traveling from the Gulf Oil terminal in Point Tupper, NS, to Sept lles, Quebec. It was loaded with 29,662 tons of "Bunker C" fuel oil.

Bunker "C" fuel oil is a term which has been used for many years to designate the most thick and sticky of the residual fuels. When steamships were coal-fired, "bunkers" was the name for the bins used to hold the coal. As marine diesel engines became prevalent, the term was carried over to include the liquid fuel tanks.

Bunker "C" fuel oil is a sticky, black liquid similar in appearance and smell to asphalt sealing compounds. At 10° C it has a consistency of liquid honey or corn syrup. At 0° C it barely flows. It is currently produced by blending the oil remaining after the refining process with lighter oil.

Because it is less dense than water, fresh Bunker "C" fuel oil would float in water either at or below the surface. As the oil ages or "weathers", it becomes heavier, but it would still float under most conditions. If the oil comes into contact with sediment, sand or other shoreline materials, they may heed together forming lumps or tar balls.

The Kurdistan was loaded with 29,662 tons of Bunker "C" fuel oil when it developed vertical gashes below the waterline in the number 3 wing tanks. These tanks, which had a total capacity of 10,000 tons soon began to leak oil, dispensing 7000 tons of this oil into the turbulent water.

A group was developed to advise the O.C. (Canadian Coast Guard On Scene Commander) regarding cleanup needs and priorities consisted primarily of EPS (Environmental Protection Service of Environment Canada) personnel. However, many other agencies contributed professional advice to EPS, including the Atlantic Geoscience Center (coastline assessments), Canada Center for Remote Sensing (reconnaissance surveys), Department of Fisheries and Oceans (sensitivity maps), advice from the Department of Fisheries and Oceans personnel, Parks Canada personnel, and Nova Scotia Department of Environment.

The harsh weather in the days after the breakup of the Kurdistan proved a problem in the effort to track the escaped oil. Continuous surveillance of the shoreline by Coast Guard helicopters revealed that there was no contamination of the ice or of the shores in the initial days. In an effort to increase surveillance capabilities, an airplane specially fitted with remote sensing devices developed Environment Canada's Arctic Marine Oil Spill Program, was employed. Initially, the remote sensing missions centered on establishing the location extent of the oil. Later, the missions provided images for the study of the behavior of oil in ice. Although remote sensing apparatus was measurably successful, locating the oil at sea and tracking it proved to be a practically unbeatable problem throughout the lengthy period of the oil cleanup.

The C.G. flew several reconnaissance missions daily over the affected area, ships in the area were asked to maintain a lookout for floating oil, and fisheries officers and park wardens maintained a shoreline search. However, a great deal of this effort was in vain and oil continued to come ashore, without warning, along length of the eastern Nova Scotia shoreline and the southern coast of Newfoundland throughout the summer of 1979.

The difficulty in locating the oil resulted directly from the fact that the oil often did not float at the surface, but remained some distance below. The oil had to be dealt with on a "clean it up as it comes" basis, and when reports of oiling of various parts of the shoreline were received, cleanup crews were dispatched to address the problem.

The efforts mounted to battle the spill stretched from the cold days of winter through the hot summer into early fall. Therefore, cleanup methods had to address not only the type of shoreline and species threatened, but also the weather likely to be experienced during the particular season in which the cleanup was being conducted.

Initially, a band of ice ranging in width from several feet to several miles coated the Cape Breton shoreline, providing a mixed blessing for those involved in oil spill cleanup. On the one hand,

the ice acted as a perfect natural barrier holding the oil offshore long enough to allow the problems of addressing the bow and stern to be met without having to face cleanup responsibilities immediately. It also allowed sufficient time to assemble manpower and equipment at strategic locations where it appeared probable that the oil would come ashore.

On the other hand, the oil in ice presented difficulties with respect to cleanup. It was obvious that the oil was being held away from the coast temporarily and that with the spring melt, the oil would find its way ashore. One direction of approach lay in cleaning up the oil from the ice before it could come ashore. To this end, the C.G. fitted a barge with backhoes, booms, and sorbent material. The barge was towed to the areas of the oil and ice and attempted to scoop the oil from the water. Although partially successful, the area over which the oil had spread was too large for this effort to be effective. In the end, the oil had to be removed as it came ashore, with cleanup crews using rakes, shovels, and pitchforks. The viscosity of the oil in the cold weather was such that it could be easily removed into stout plastic bags.

During the cleanup, EPS provided environmental information on beach cleanup and protection methods and set priorities as to the areas to be cleaned in order of environmental importance. Several areas such as marshland, recreational beaches, and offshore islands required specialized attention.

The marsh areas were particularly sensitive, not only to oiling, but to methods of oil spill cleanup. Some consideration was given to using a sod cutter to remove contaminated grass, but the method was deemed severe, and ordinary rakes and garden hoes were employed to preserve the root system and thus ensure future growth.

The overall effect of the bunker C on the shoreline itself was relatively minor. Because of the thickness and consistency, the oil generally remained on the surface of the beaches without sinking into the sand; thus, it was easier to remove without causing undue disturbance the shoreline. Furthermore, heavy machinery, such as bulldozers and pay loaders, were not employed on the beaches, as learned from the "Arrow" cleanup.

In areas where the fishing industry is active, the oiling of fishing gear was unavoidable. Fish nets were heavy casualties, and in order to clean them, a fish-net Laundromat, initially built during the Arrow oil spill in 1970, was reconditioned and put to use. The Laundromat was very successful, cleaning nearly 100 nets and cleanup equipment, such as oiled booms, as well.

By far the most visible victims of the spill were the dead and dying birds, which washed ashore by the hundreds. It is impossible to at an accurate figure for the number of birds killed, because up to 80% may have died at sea and never washed ashore. However, the Canadian Wildlife Service estimated that the total number ranged from 12,000 to 25,000. Most of the inshore birds killed were gulls and ducks, especially Old Squaw, Eiders, and Scoters, while at sea Auks such as Murres and Dovekies were seriously affected. There was also some mortality among seals, but damage to shellfish areas was minimal.

In all 997,000 bags and 1,500 barrels of oily debris were collected and this material required a means of disposal. Representatives from the Nova Scotia Department of Environment selected sites at Hadleyville, Forchu, and St. Peter's on Cape Breton Island for disposal sites. These sites were chosen on the basis of their accessibility, soil characteristics, ground-water levels, and proximity to cleanup locales.

The shoreline was subjected to many inspection tours, generally by EPS personnel, often in conjunction with members of other agencies such as fisheries officers, park wardens and Nova Scotia Department of Environment staff also provided valuable assistance. Each cleaned area was inspected to determine its suitability from an environmental viewpoint and EPS personnel advised the C.G. when cleanup became environmentally acceptable. Where re-oiling occurred, as it often did, the beach was reinspected after subsequent cleaning.

A Look at the Environment Impact of Waste Disposal Along the Nova Scotia Shorelines. (2021, Oct 31). Retrieved from http://envrexperts.com/free-essays/essay-about-look-environment-impact-waste-disposal-along-nova-scotia-shorelines 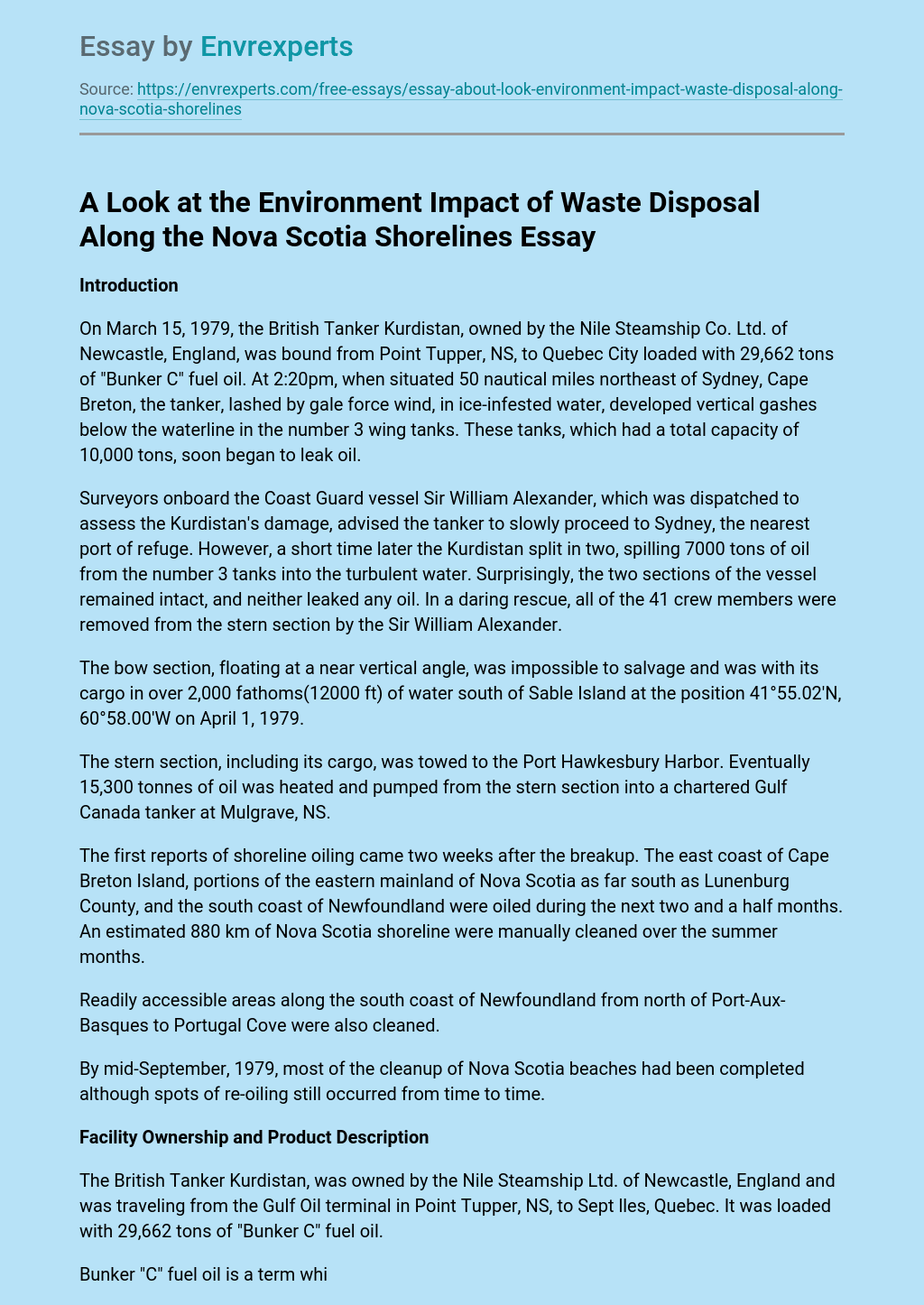