Half man and half beast. This is what is usually said about the gorilla. They say that the gorilla is related to us. You can find mountain gorillas in the Virunga Volcanoes, which are located on the boundaries of Zaire, Rwanda, and Uganda. The Virungas are 600 miles of tropical rainforest. Youll find then roaming around 7,800 and 11,000 feet, but at low elevations. The gorillas live in units. Most of the units consist of about 6-12 members in it, most of them being related in some way.

Don’t waste time
Get a verified writer to help you with A Look at the Gorilla and the Various Conservation Efforts to Save Them
Hire writer
$35.80 for a 2-page paper

With each unit, there is a leader, usually an old silverback, who was a virtual dictator. A silverback male has large canines and he may weigh 400 pounds. He is the one who decides when to proceed, and when to stop, and which direction to go. When he sleeps, everyone else is supposed to be sleeping to, and then he gives a signal to wake up. When the old silverback gets too old, then his eldest son usually is the one to take over.

The females are usually responsible for the nursing portion in the unit.

Gorillas are peaceful and tolerant by nature. Whenever two groups meet, they either ignore each other, or they give each other a grumpy grunt. Sometimes the two groups would even stay together, and then eventually separate. There are many rumors about gorillas being very violent, but there are no reports about it. There are times when they have little mock fights, but there is never any bloodshed in them.

Right now, there are not too many mountain gorillas you will find in the Virungas.

Their population is only in the hundreds. In 1960, there was an estimated 450 gorillas still remaining in two isolated habitats. In a 1981 census, it gave a figure of about 254 gorillas. Right now, there is somewhere between 400-450 mountain gorillas that have survived.

There are so few of these creatures for many reasons. There are many poachers who kill the gorillas for their head or hands to sell to tourists as a souvenir, or hunter that kill them to have a trophy. With so much of this going on, the rangers of the parks so not think there will be any more of these gorillas left by the end of the century.

There have been a few projects and conservation groups made to save this endangered species. The Washington-based African Wildlife Foundation started a program in the parks on park security, to prevent as much poaching. The tourist program also developed rapidly. They went from 1,352 paid visitors in 1978 to 5,790 in 1984. With the help of the money from tourism, they were able to start some programs on the conservation of the mountain gorillas. The basic issues of the groups and programs are human population and the way land is used.

The future for the gorillas looks very bleak. Illegal logging, gold prospecting, and hunting has become more and more popular where the gorillas live. To assure gorillas a future will require a dedication that cannot just be done through projects or even years or centuries, but it takes a commitment for the rest of eternity.

A Look at the Gorilla and the Various Conservation Efforts to Save Them. (2021, Oct 31). Retrieved from http://envrexperts.com/free-essays/essay-about-look-gorilla-and-various-conservation-efforts-save-them 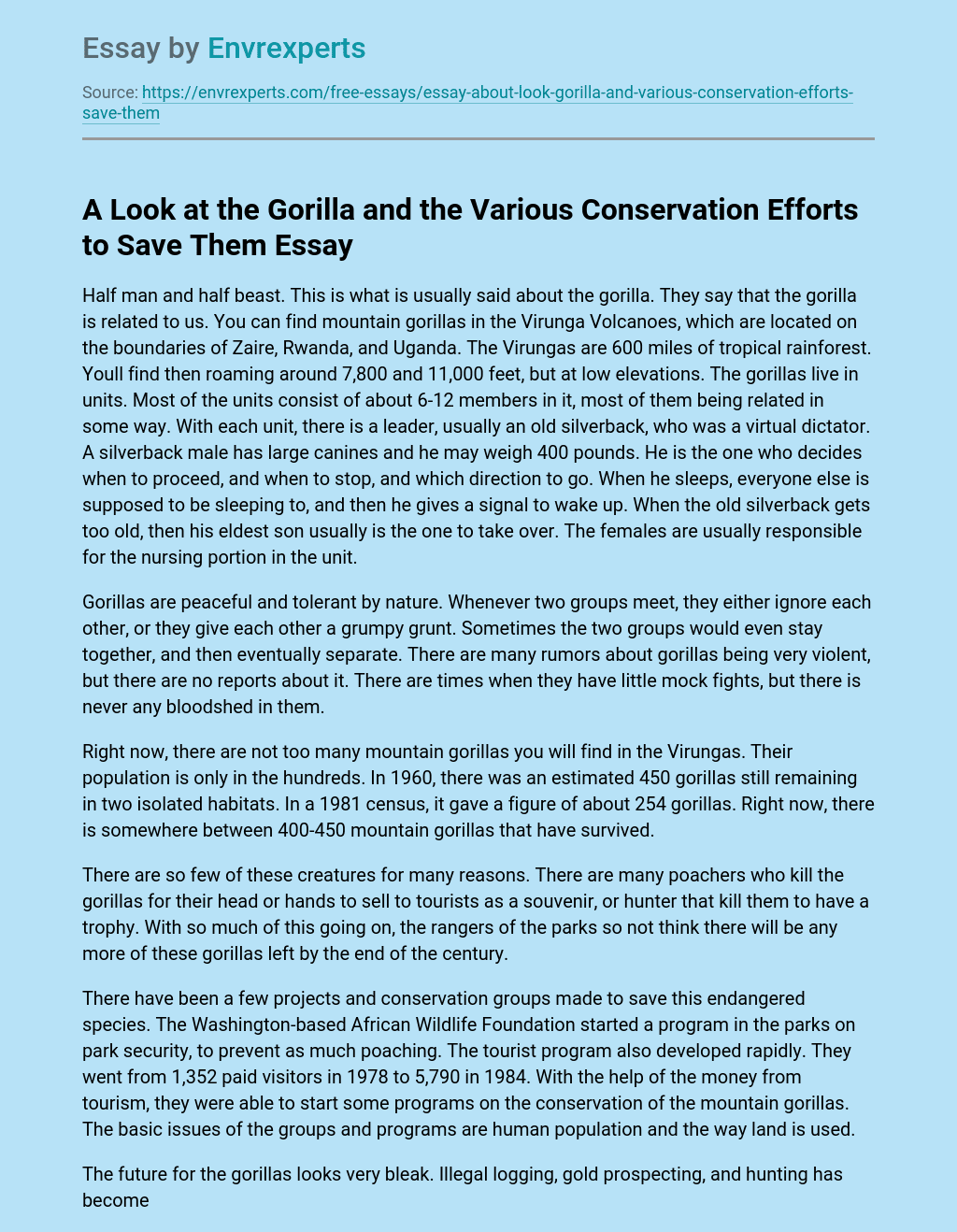