Greenpeace is an environmental organization with 2.5 million supporters. It was founded in 1971. You may ask, Exactly what is greenpeace? Greenpeace is committed to protecting the global environment and it works in more than 30 countries. They are independent yet they do believe in working with industry, government, and organizations to find environmental solutions. They spend most of their time lobbying decision-makers, conducting scientific studies and researching international best practice to use in the local areas. They have been known to act directly whether it is in demonstrations or protests.

Don’t waste time
Get a verified writer to help you with A Look at the History and Formation of the Greenpeace Environmental Organization
Hire writer
$35.80 for a 2-page paper

They have disrupted oil development projects when they found it necessary or blocked pirate fishing vessels. They believe, as Gandhi and Dr. Martin Luther King Jr., that non-violence creates debates in the public eye and puts pressure on the authorities and industries because if they fight back they know the public will see the hurt of the unarmed man and of the man who sits while he is being beaten.

Greenpeace is involved with more than one thing at a time.

For example green peace and the forest are no strangers.

In May of 94 green peace toured the Amazon taking photos. They have even stated their position on ancient forests. In the appendix to the Green peace Principles and Guidelines for Ecologically Responsible Forest Use, 1994 Green peace calls for all the earth s remaining ancient forests to be protected from destruction. Did you know that only 1/5 of the world s original forest still remains as large areas of intact ancient forest, and that nearly half of what is left is now under threat-mostly form logging but still from mining, flooding, agricultural, and fires. Green peace even made a visit to the Brazilian Rainforests in October of 94.

Green peace and the ocean have had many contacts recently. The reason for some of them is the ocean dumping. In April 95 May 96 they protested in the North Sea about an ocean dumping site. Not only did they protest dumping but whaling also. On various dates they campaign against industrial fisheries in the North Sea and have made a platform tour there. In early February 95-mid March 95 they made many whaling campaign updates.

Nuclear waste and nuclear bombs has come up on the list of things that Green peace has tried to deal with. In Feb. 96 green peace took action at a nuclear power plant in Laguna Verde, Mexico. From Feb. 95 to April 95 they followed the nuclear waste shipment from France to Japan. January March 1997 there was a nuclear waste shipment that green peace was involved with trying to stop. Nuclear bombs have also worried green peace. September 24, 1996 green peace celebrates the end of 25 years of campaigning and this is also the date that The Comprehensive Test Ban Treaty was signed in New York and should be the beginning of the end for nuclear testing.

In 1992, Green peace became involved with the Olympics. There was a contest for the best Sydney Olympic site and the village that green peace came up with was car-free, powered by the sun, used land wisely, allowed only non-toxic and eco-friendly materials and showcased cutting edge green technologies from around the world. They have been there for Sydney to support its unique environmental approach.

Basically what green peace stands for is what all of us want. We want a clean safe environment free of all the pollution and a place where our children and our grandchildren can live. They believe the problems facing the planet today are too urgent not to take action even if it is non-violent debates. We feel that this is the way to go because we all want that better world its what we have been waiting for all our lives and have been fed through all the media. For example hover cars and so on if we want this to become a reality we need to help so if you would like to get involved with any of the projects green peace is working on just contact green peace.

A Look at the History and Formation of the Greenpeace Environmental Organization. (2021, Oct 31). Retrieved from http://envrexperts.com/free-essays/essay-about-look-history-and-formation-greenpeace-environmental-organization 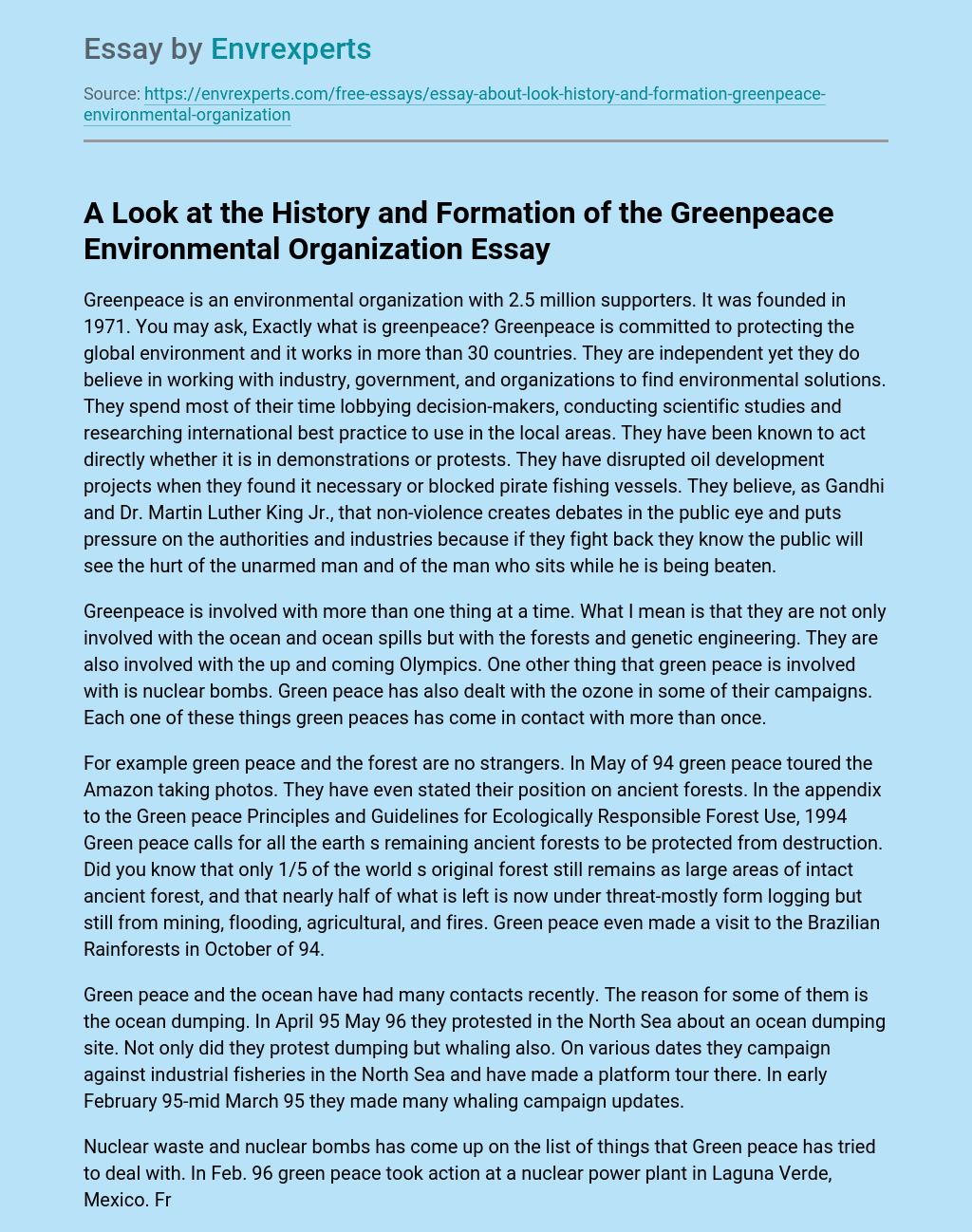