As time advances pollution is every where, humans more and more rely on machines to live their lives. Machines like cars and trucks, airplanes, computer, all of which produce some kind of pollution. Maybe air, water, and even noise pollution are cause by these machines. Efforts to improve the standard of living for humans have resulted in pollution. Much of the world's air, water, and land are now partially poisoned by chemical wastes. Some places have become uninhabitable. This pollution exposes people all around the globe to new risks from disease.

Don’t waste time
Get a verified writer to help you with A Look at the Major Types of Pollution in Our World Today
Hire writer
$35.80 for a 2-page paper

Many species of plants and animals have become endangered or are now extinct. As a result of developments, governments have passed laws to limit or reverse the threat of environmental pollution. Even though people are trying to help this problem time cant be turned back and much damaged has already occur.

Factories and transportation (like cars or planes) depend on huge amounts of fuel every year. When these fuels burn they introduce smoke and other, less visible, by-products into the atmosphere.

Although wind and rain occasionally wash away the smoke given off by power plants and cars, the cumulative effect of air pollution poses a grave threat to humans and the environment.

In many places smoke from factories and cars combines with naturally occurring fog to form smog. Smog has been long recognized as a potential cause of death, especially for elderly persons and those with severe respiratory ailments (like asthma). Air pollution originally resulted from large-scale use of heating fuels (like coal and wood).

Since the beginning of civilization, water has been used to carry away waste. Rivers, streams, canals, lakes, and oceans are currently used as wastebaskets for every kind of pollution man could create. Water has the capacity to break down or dissolve many materials, but not all materials. Waste materials that can eventually decompose in this way are called biodegradable. They are less of a long-term threat to the environment than are more persistent pollutants such as metals, and plastics. These substances remain in the water and can make it poisonous for many forms of life, like fish and other creatures. Even biodegradable pollutants can damage a water supply for long periods of time. As any form of contamination accumulates, life within the water starts to suffer. Lakes are especially vulnerable to pollution because they cannot cleanse themselves as rapidly as rivers or oceans.

Factories sometimes turn waterways into open sewers by dumping oils, toxic chemicals, and other harmful industrial wastes into them. In mining and oil-drilling operations, corrosive acid wastes are poured into the water. In recent years, municipal waste treatment plants have been built to contend with water contamination. Some towns, however, still foul streams by pouring raw sewage into them. Septic tanks and cesspools, used where sewers are not available, may also pollute the groundwater and adjacent streams, sometimes with disease-causing organisms. Even the purified liquids from sewage plants can cause water pollution if it contains high concentrations of nitrogen and phosphorus (which are chemicals used to clean and purified the water). Farm fertilizers in some regions fill groundwater with nitrates (another kind of chemicals used to make soil more suitable for growing plants), making the water unfit to drink. Agricultural runoff containing dangerous pesticides and the oil, grime, and chemicals used to melt ice from city streets also pollute waterways.

There could also be noise pollution, which is unwanted noise like cars or trucks in a city. The intensity (or volume) of sound is measured in decibels. For example, a clap of thunder has an intensity of about 100 decibels. A sound at or above the 120-decibel level is painful and can injure the ear. Noise pollution is becoming an unpleasant fact of life in cities, where the combination of sounds from traffic and building construction echoes among high-rise buildings, creating a constant din.

In addition, the intense volume at which some popular music, especially heavy metal rock music, is played has resulted in the loss of some or all of the hearing of a few musicians and members of their audiences. There is some evidence that extreme levels of noise can produce other deleterious effects on human health and on work performance. For instance loud music or the honking of horns doesnt let the brain work as well because the person cant concentrate.

A Look at the Major Types of Pollution in Our World Today. (2021, Oct 31). Retrieved from http://envrexperts.com/free-essays/essay-about-look-major-types-pollution-our-world-today 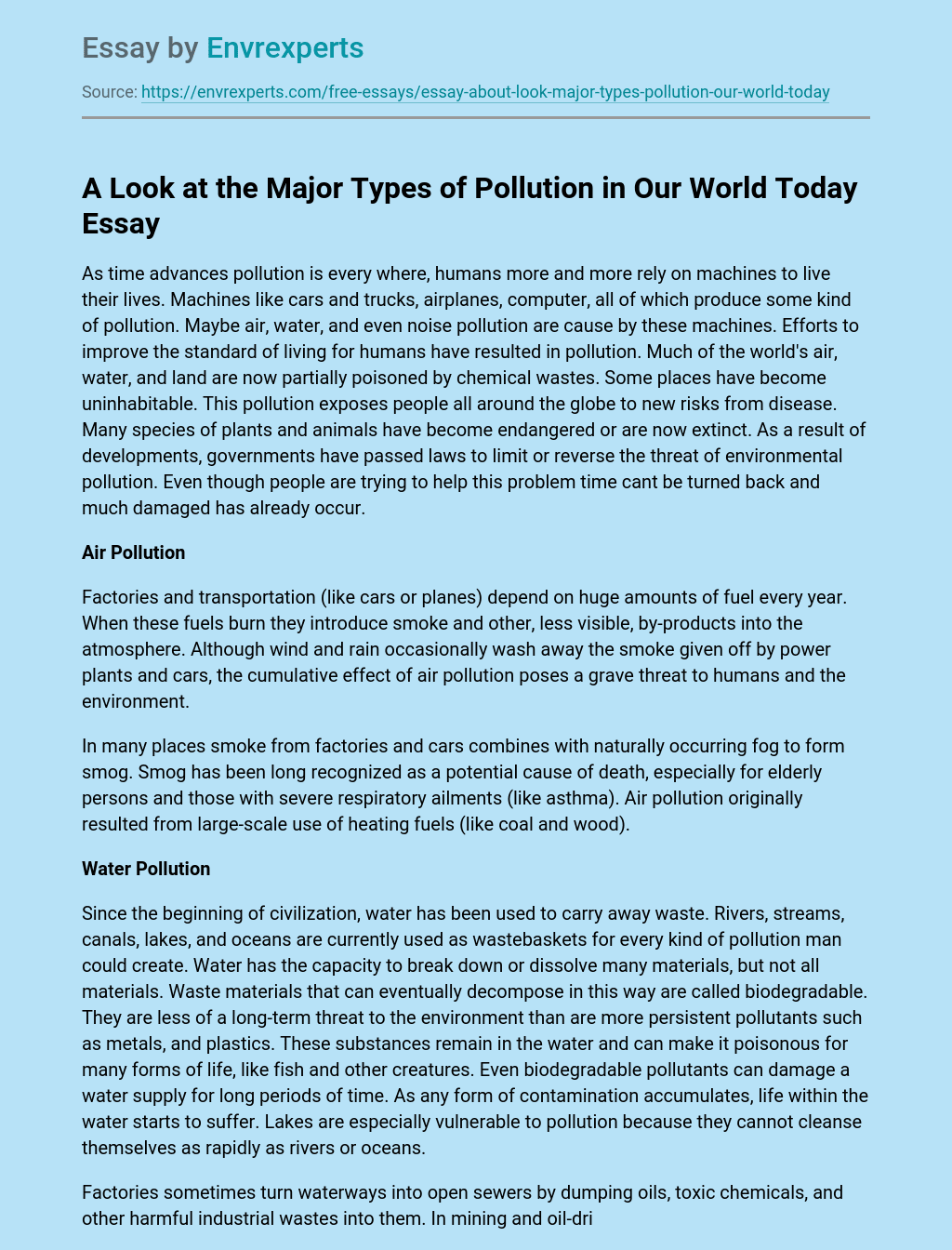