There are many effects of the climate change present throughout the world, one of these effects is the rising sea level in Florida. Florida is seeing a rise in tide at a rate not seen in centuries. These rises in sea level are currently affecting key points of infrastructure in Florida. Three of these support beams being eroded by rising tides are Florida's ecosystems, fishing industry, and tourism. They have an almost symbiotic relationship about them and feed off of each other, so if just one of these is damage, the entire system is affected.

Don’t waste time
Get a verified writer to help you with A Look at Rising Sea Level in Florida as One of the Effects of the Global Climate Change
Hire writer
$35.80 for a 2-page paper

Increased emissions of CO2 and climate change have quickened the speed at which sea level naturally rises (Desantis 2349). These rises in sea level have created a loss of forest, marshes, coral reefs, and marine communities (Desantis 2349). These flooded areas can flood extremely quickly like a flash flood, but then immediately go into a period of drought. This climate extreme is terrible for coastal salt marshes and is causing Florida to lose many of its natural salt marshes and ecosystems.

This rise in sea level has not been seen so rapidly in any time in recent history. For example, from 1939 to 2005, it was recorded that the sea level was rising at an average rate of 2.4 millimetres (mm) per year. This is fine and is considered to be a natural increase experts have seen for decades, however, in 2005, something happened that many speculators had foreseen but had never seen happened in such a short period of time in such a large increment.

In 2005, the sea level rose from the average 2.4 mm rise per year to a whopping 17 mm rise in that year alone (Desanti 2352). Now that the amount of rise in sea level has been established, it is time to dive into the real problem, the cause. There are multiple speculated causes to sea level rise in Florida and around the world, as an example, glaciers and ice sheets can be a large contributor to rises in sea level once they melt from the natural heatin of the Earth. Glaciers and ice sheets contain about 70 percent of Earth's freshwater (ECOS 1). These glaciers and ice sheets naturally melt and refreeze during Earth’s heating and cooling cycles, Earth is currently undergoing a heating cycle so these glaciers and ice sheets are already naturally melting. The current amount of CO2 being pumped into the air from factories, vehicles, etc., however, is essentially engaging “warp speed" on the natural melting of the glaciers. It's as if Earth is an engine that is already going at a certain pace, but humans are fuel injecting the engine to make it go extremely faster and faster. So as these glaciers start melting more and more quickly by the day, and more water is being distributed into the ocean and causing mass flooding and corruption of ecosystems such as the salt marshes of Florida.

Now that the basis of the problem is understood, it is now time to investigate the possible effects this flooding and increased sea level can bring about in Florida. It was already covered that salt marshes are currently being affected by high rise sea levels, but now the long term effects will be brought forward into the spotlight as the changes that could come down the road could be much more catastrophic than losing some salt water marshes and trees.

Firstly, it is common knowledge that an ecosystem is a delicate thing. Many animals and plants alike live together with a common order and if one small thing is changed, a new species being introduced or a species not being as abundant for a period as a food source could destroy the entire ecosystem as it is known. Those are simple changes, an ecosystem that is flooded by salt water from rises in ocean waters could result in many ecosystems being absolutely and utterly lost. When these freshwater ecosystems are hit by ocean waters, the current inhabitants (freshwater fish) can sometimes hit their maximum lethal salinity limit and simply die; the fish that do not hit their maximum lethal salinity limit (or MLSL) have been recorded to die from the drought that comes after most flooding in these ecosystems after reaching their minimum lethal temperature limit (Boucek 1824). Studies done during a massive cold front in 2010 showed that while top predators were dying out, the former prey thrived in the predator free environment. Snook numbers, for example, dropped by more than half, while the spotted sunfish quadrupled in number (Boucek 1826).

Moving right along, the fishing industry relies on these freshwater ecosystems to an extent to have any fish to catch and sell. If these kind of Climate Extremes (CE's) continue to occur, the fishing industry will have to strictly rely on saltwater fishing and will take a major economic hit resulting in a definite loss of jobs and an absolute loss in food. Many restaurants would not be able to offer the variety of fish they do today, as they would not be able to purchase these fish from the industries that catch them. A shortage of bass, catfish and other freshwater fish at both levels of the economic chain would be followed shortly by near extinction of fresh fish (Boucek 1825). Looking into the future, the fishing industry of Florida will all but disappear if sea level rises just 5 more metres as many coastal cities will vanish with the tide (Hansen 1). There are, however, strategies being implemented to protect ecosystems from these Climate Extremes. In Australia for example, The Great Barrier Reef is experiencing the same problems in accordance to Climate Extremes. The Australian government is offering fishing and tourist industries that better adapt to these climate extremes certain tax exemptions in order to keep business thriving and well (Barnett 5).

And now the bread and butter of Florida's economy next to agriculture: tourism. Tourism is a large part of Florida's economy. Tourism pulled in 754 billion dollars in 2011 alone. Many people visit Florida yearly for the beaches, the historical landmarks, and national parks such as the Everglades along with many more reasons. These places however are currently threatened by the rise of water. Tying in the previous two sub categories is simple in this relationship of tourism, fishing, and ecosystems. Cuisine in Florida's highly touristic areas (Miami, The Florida Keys, and Daytona Beach) is almost entirely based off of a seafood diet. If these marine ecosystems are destroyed, then there could be no fish to supply the restaurants, feeding these tourists the unique food they so crave as they visit Florida's mostly tourist populated areas. This could lead to a lack of tourists, and therefore a mass closing of restaurants and fishing companies. Florida's current GDP is approximately 839 billion dollars; tourists contribute to this gross domestic product in a very large way. What happens when there is nothing left for tourists to indulge in while in Florida?

These three sub categories rely on each other to thrive in Florida's tropical climate and peninsular environment. It is as if Florida's economy is almost an ecosystem in itself, one entity thriving off of another. Both the marine ecosystems and the economic ecosystems could be on the verge of collapse if climate change continues to affect the rise in tides (Boucek 1830).

Florida's ecology is a very delicate system that is currently being affected at a rapid pace by rises in tide. These rises are currently affecting salt water marshes and other coastal environments, but in the long term they can affect other more inland ecosystems with flooding, the fishing industry, and tourism. A chain reaction that could utterly destroy Florida's economic and environmental ecosystem as it is known today. In conclusion, although these extremes are not going to destroy the environment and economy over night, but they are certainly a threat that should be taken seriously in the long term.

A Look at Rising Sea Level in Florida as One of the Effects of the Global Climate Change. (2021, Oct 31). Retrieved from http://envrexperts.com/free-essays/essay-about-look-rising-sea-level-florida-one-effects-global-climate-change 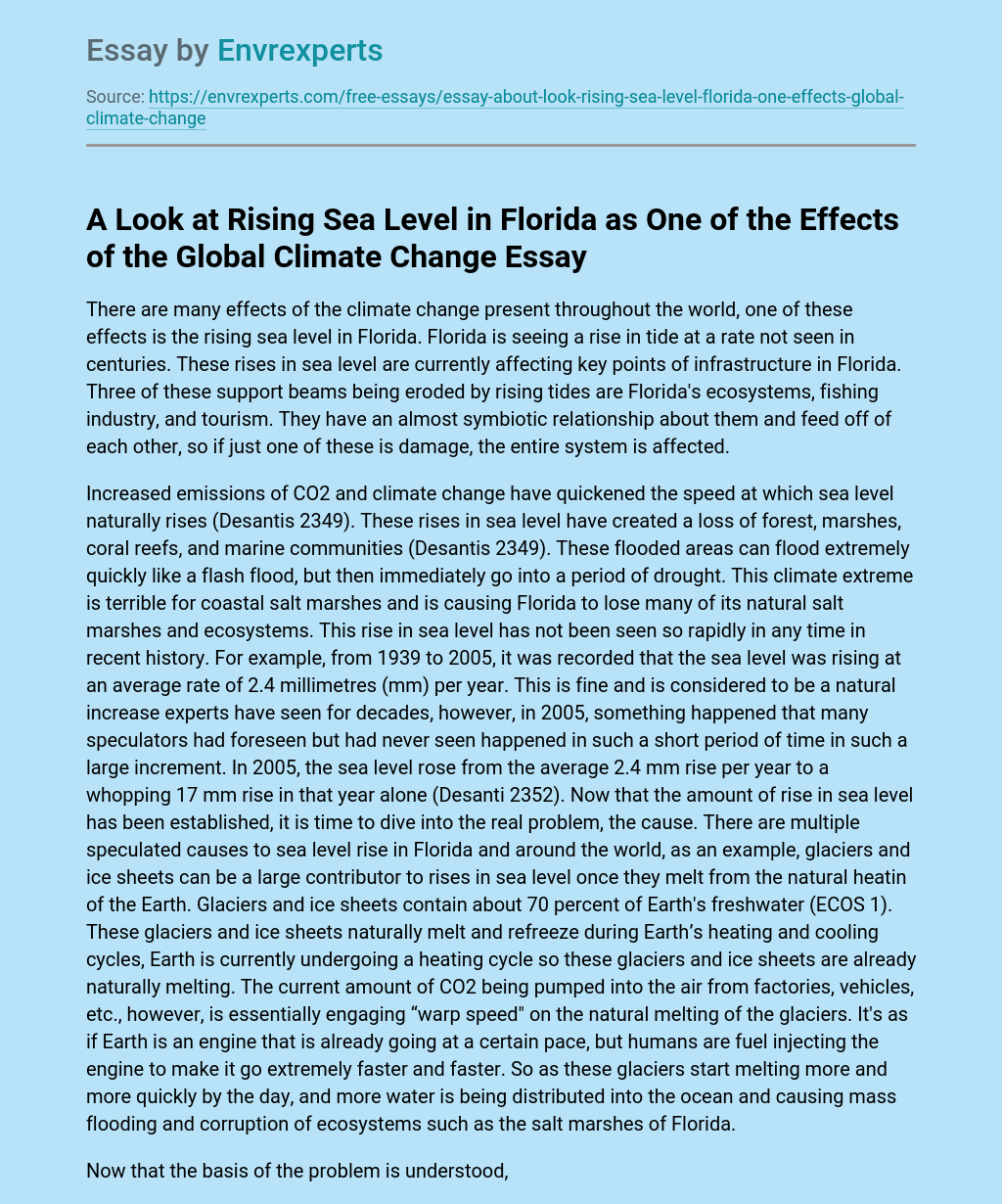