Don’t waste time
Get a verified writer to help you with Main Goals of Greenpeace
Hire writer
$35.80 for a 2-page paper

The mission has grown over the years and is the foundation of an organization. You can see the mission as the underlying motivation of the organization to contribute to society. The underlying question in the mission is the \"why\" question. Greenpeace has had very clear norms, values ​​and thus a mission since its foundation in 1971 (Keblusek E, 2016).

Independence. No money is accepted from governments, companies or political parties. Individual contributions, along with grants from foundations, are the only source of funding.
Openness to cooperation. Greenpeace has no permanent friends or enemies. If governments or companies are willing to change, they will work with them to achieve their goals.
Promote solutions. It is not enough to point the finger; developing, researching and promoting concrete steps towards a green and peaceful future for all is pursued.

(Greenpeace International, n.d.)\nhttp://teamleidersacademie.nl/teamleiderschap-academie/visie/is-verschil-visie-missie-en-strategie/
Where the mission is often abstract, the vision is a more concrete concept, the vision of an organization often means what it strives for in the near future, a dream for the future. It is often drawn up for a period of time so that it can be evaluated and if it needs to be updated. It is also always checked whether the vision is in accordance with the mission of an organization (Keblusek E, 2016).\nhttps://www.greenpeace.org/international/explore/about/values/
Greenpeace has set a number of overarching goals for itself over the years; protect biodiversity in all its forms; prevent pollution and misuse of the ocean, land, air and fresh water of the earth; end all nuclear threats; and promote peace, worldwide disarmament and nonviolence (Greenpeace International, z.d.).  These goals are still fairly abstract so Greenpeace has identified six more specific and concrete goals for itself.
Stopping climate change. Greenpeace, like most environmental organizations, puts the fight against global warming at the top of the list. Greenpeace takes a fairly firm view of alternative energy – it considers nuclear power and clean coal technology, often popular alternatives to traditional fossil fuels, unnecessary or dangerous. Instead, it defends wind, solar and biofuels. Greenpeace also suggests that governments reduce emissions through CO2 trading and CO2 taxes.
Protecting oceans. Greenpeace is perhaps best known for its campaigns to protect whales and other large aquatic animals from hunters and trappers. Greenpeace programs focus on multiple areas of ocean defense, with particular emphasis on pollution and unfair or abusive fishing practices.
Saving old forests. Felling and felling old forests drives species of plants and animals to extinction and threatens the lives of people whose survival depends on the forest\'s resources. Greenpeace protects forests by educating the public about the origins of tropical forest, holding governments responsible for felling, and even camping in trees to ward off lumberjacks.
Achieving disarmament and peice. The world maintains an arsenal of 30,000 nuclear weapons, and several countries are actively pursuing the technology to develop even more. Greenpeace's first mission protested nuclear testing, and the organization continues to advocate for peace and disarmament today. Public opinion polls conducted by Greenpeace show a heartfelt disapproval of nuclear weapons in armed and unarmed countries, and the organization is using these statistics to make way for the disarmament struggle. 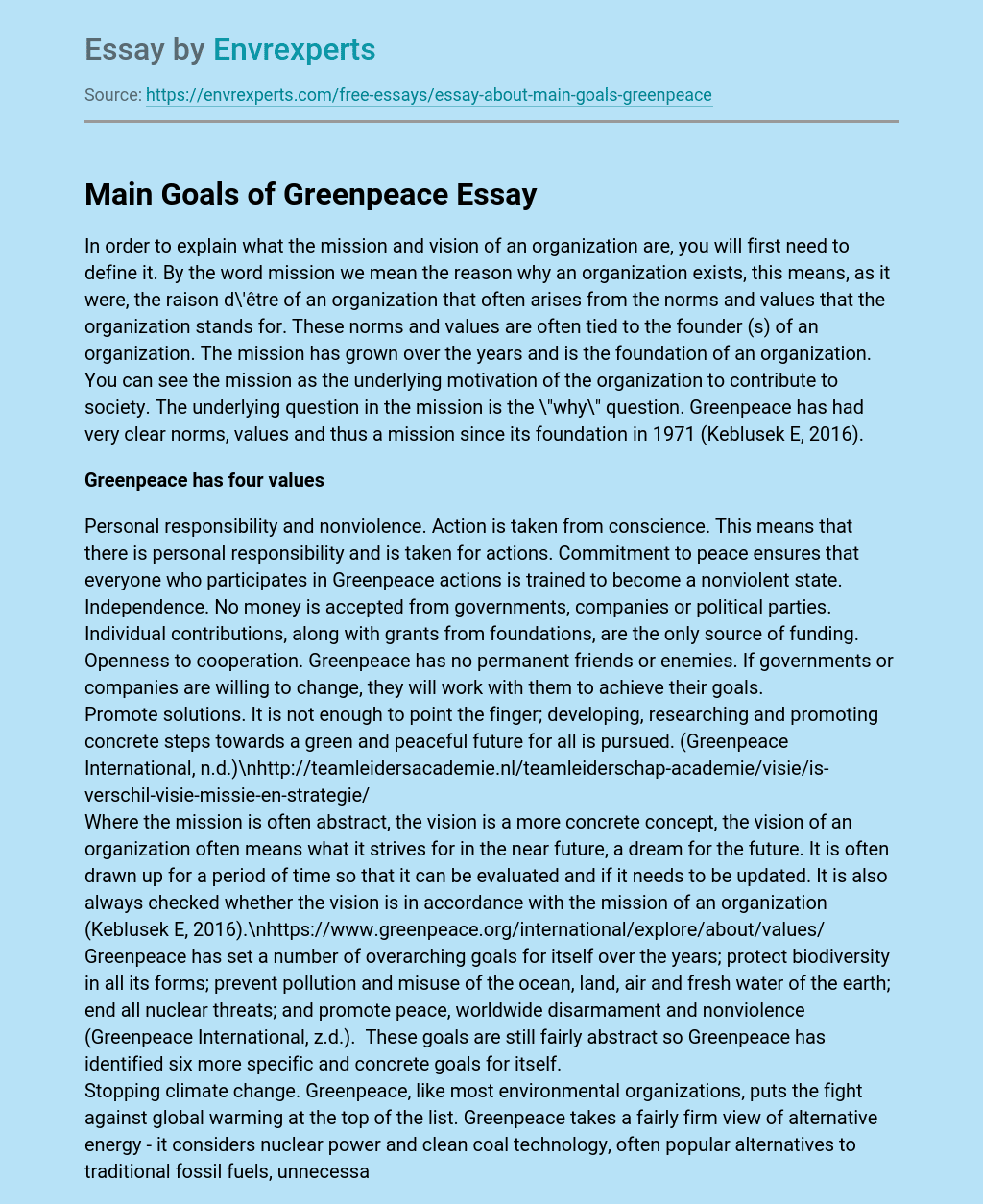