The Major Setback to Development of Countries

Global warming is a rise in global temperatures when greenhouse gases and other air pollutants are released in the atmosphere where they gather and absorb sunlight and solar radiation which should be released into space. This trapped heat causes the plant to get hotter which is known as the greenhouse effect.
Global warming can cause many health, social and economic problems for countries, which can hold the countries back from improving themselves and developing further. These effects can come in many forms especially affecting developing countries most as they are the ones that are more vulnerable due to their lack of the ability to deal with these problems efficiently.

Don’t waste time
Get a verified writer to help you with The Major Setback to Development of Countries
Hire writer
$35.80 for a 2-page paper

I will be discussing the effects brought along by global warming individually and stating how each of them could be a hinder to development.

This will increase the likelihood of people in the affected countries contracting malaria and other infections brought by insects. Other regions are also affected. For example, the United Kingdom was had an outbreak of the legionnaires\' diseases (which is a bacterial lung infection that is linked to global warming) also, the United States were suffering from malaria outbreaks in 2006. According to research done by The World Health Organisation global warming will also cause a major increase in insect diseases in Europe. Specifically, countries like Azerbaijan, Tajikistan and Turkey might already be in the danger zone for malaria.

There is a difference in how different countries will deal with this problem because the ability to tolerate these temperature changes differs from region to region. ‘Richer’ societies can utilize technological advances; for example, the use of more powerful air conditioners and the construction of houses minimize heat retention. On the other hand, developing countries lack not only the technological knowledge, but also the resources and public health systems, required to prevent such outbreaks. This would cause a developmental setback as countries would have to invest their resources in providing aid to their citizens which will slow down their development as their resources will be used in trying to combat these diseases rather than to run development projects.

Vulnerable people in the populations include people such as the elderly, children and the sick. This was already seen during the 2003 heatwave in Europe, which claimed approximately 35,000 lives. In a study by Hadley Centre for Climate Prediction and Research in the United Kingdom, scientists using computer models showed how greenhouse gas emissions have increased the likelihood of heatwaves. The most common health effect is hyperthermia or heatstroke that can be fatal if left untreated. IPCC predicts that global warming will lead to hot days, followed by nights of high temperatures. `
This could therefore hinder their development because affected countries like these might have to put their development projects on hold so that they can use their resources to find a way to curb this problem. This could take them a long time as these problems could be affecting a lot of people so they will need to be able to cater all of them. The focus on these diseases, will drive their attention away from development of the country as the amount of people who will be affected is large and this will mean that there will be a shortage of labour in the country due to the people in the working sector being affected by this either getting sick or being affected by the situation one way or another.

Global warming can also cause loss of agricultural productivity

Global warming can result in droughts that can worsen living conditions, particularly in Africa, where agriculture is a big part of their daily earning and their main source of food. The World Wild Fund has reported that climate change can drastically alter rainfall pattern, and risk water and food supplies for millions. The IPCC report estimates that approximately 75 million to 250 million people in Africa will be without adequate water and will face food shortages by 2020, as crop productivity will decline by about 50 per cent. Rising temperatures could also result in food shortages for 130 million people in Asia, which will all be caused by global warming. With some of these African and Asian country depending highly on agriculture to survive and make an earning, and get food this will cause a major standstill in their progress or even cause them to move backwards because the governments of these countries will have to come up with a solution for their problem, as the country wont be able to function as usual because of this lack of food.

Global warming could be a security threat

At the UN Security Council debate on energy, security and climate, British Foreign Secretary Margaret Beckett introduced global warming as a security risk. Despite opposition from many Council members, such as the Russian Federation and China, she argued that the loss of basic needs due to climate change in poor countries can increase the risk of conflicts. Similarly, Ugandan President Yoweri Museveni has labelled climate change as \"an act of aggression by the rich against the poor\". If crime rates spike up due to the lack of resources and possibly even jobs for people to do, this could be very bad as it would only cause more crime to happen. This could result in a national crisis as the government will have so many problems to deal with from the lack of food to the provision of security in many of those affected.

The Major Setback to Development of Countries. (2021, Oct 31). Retrieved from http://envrexperts.com/free-essays/essay-about-major-setback-development-countries 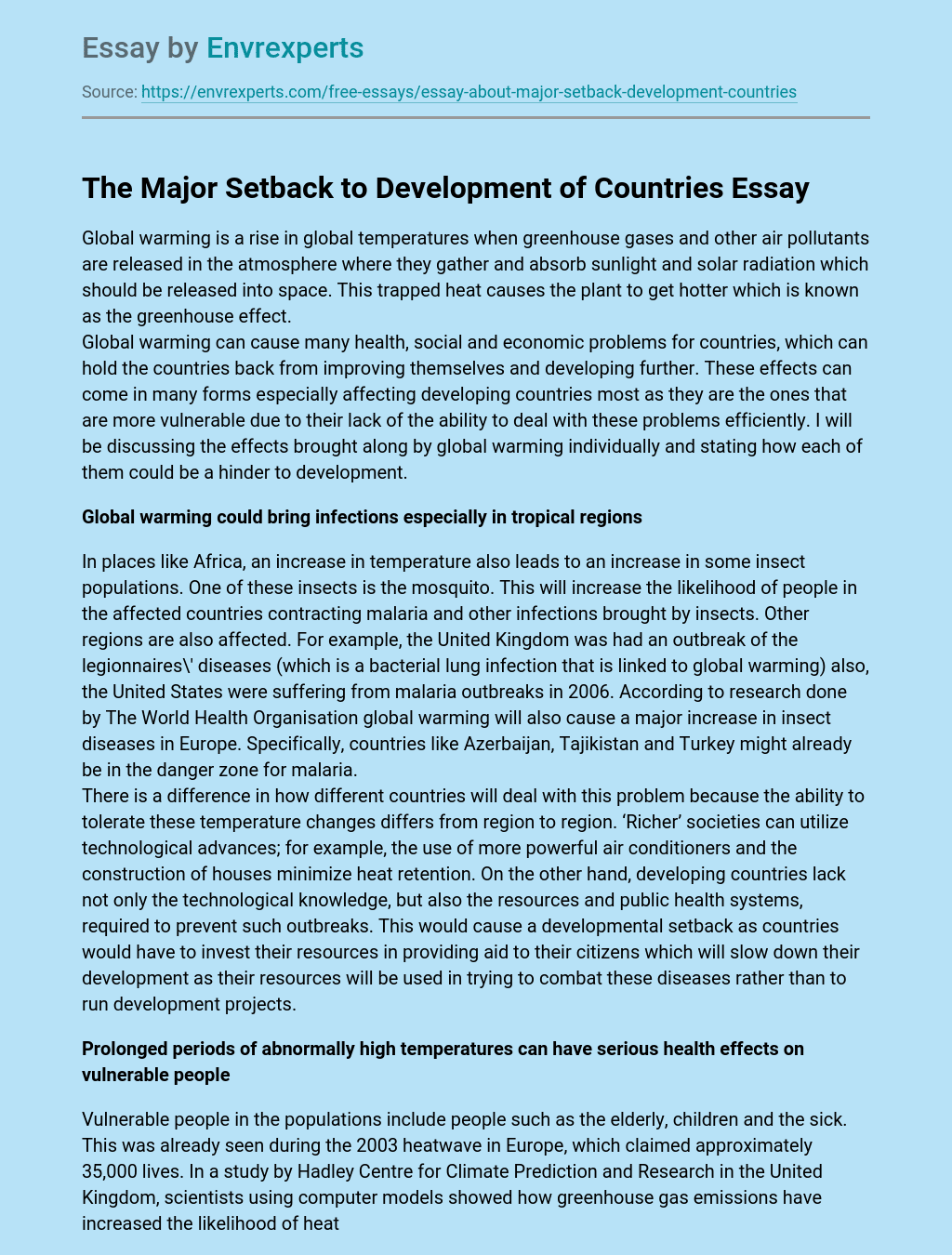