Making the Water Clean Again Through the Local Streams in Pennsylvania

Local streams in Pennsylvania are not how I would expect them to be. Growing up, the world seemed to be perfect and now through research my view has changed. The local streams that I have visited as well as the local lakes have taken a toll from the agriculture in our area.

One of these local streams is Gravel Run. This stream used to be surrounded by trees but now is surrounded by grass and cattle. Since all of the trees have been bulldozed over, there are no roots holding the soil together.

Don’t waste time
Get a verified writer to help you with Making the Water Clean Again Through the Local Streams in Pennsylvania
Hire writer
$35.80 for a 2-page paper

This causes the soil to crumble into the stream and be more easily eroded. With this causes no riparian, the waste from the cattle is washed right into the stream after rainfall. Streams draining agricultural lands support less species that are sensitive to pollution than streams that drain forested land (Allen 2004). From personal observations I know that forested land can restrain the flow of water where as having a flat vacant riparian zone the waste water travels directly into the stream.

This waste causes the stream to not be as healthy and therefore deters the ability for many species to survive because the water is not stable enough for them. The runoff contains nutrients that when added to waters can result in algal blooms which contributes to low oxygen, fish kills, and damage to submerged aquatic vegetation(Kogelmann 2006). This loss of species and erosion was found in Bradshaw Stream several years ago. Instead of letting the situation get worse, the stream was rehabilitated.

Even though this is advantageous to the environment findings indicate that large scale and long-term agriculture disturbances limit the recovery of stream for many decades (Harding 1998). This means that even though to my classmates and me the stream seemed to be healthy, indicated by the insects that we found and with the boulders helping against erosion and the trees aiding in that, the stream stills needs years to heal. The Bradshaw stream is located on a farm just like Gravel Run yet the famers are aware of the harm they can place upon the stream so they are cautious.

This stream runoff eventually will combine into a lake or river. In many cases local streams are tributaries to Sugar Lake. Sugar Lake is another body of water that my classmates and I were able to research. To the naked eye the water of Sugar Lake looks murky. The unexplained variance in Sugar Lake is most likely due to phytoplankton and suspended materials that might originate as agricultural runoff and as lake sediment resuspension (Ostrofsky 2004). This murkiness is causes by the algae and phytoplankton in the water. These grow immensely when phosphorus is present, which is an active ingredient in many fertilizers. In Sugar Lake they have been trying for years to get the levels reduced and have been semi successful. Although phosphorus and other nutrient levels have been reduced, nonpoint sources of phosphorus- those which have no single point of origin- continue to enter the lake. These problems are mainly caused by animal waste and fertilizer runoff (Jeanneret 1989). These non-point sources are the majority of the time streams that are carrying runoff from local farms. This runoff causes the algae to grow, rapidly clouding the water. This murky water prevents photosynthesis from occurring so the algae die. These dead algae sink to the lake bed, where bacteria decompose the algaewhich also means they are using up the oxygen (Wines 2013). The loss of oxygen in the water cause "dead zones" where fish cannot survive because they need oxygen in order to breath. In these dead zones plants cannot live either, except on our trip to Sugar Lake we witnessed several lily pads and water grass. This indicates that the entire lake is not dead just that certain parts are.

Sugar Lake is not the only lake in Pennsylvania that has dead zones. The great Lake Erie has a large "dead zone" itself so it can be deduced that it is not the healthiest lake. About 30 years ago not much lived in the lake except trash, fish, algae, bacteria, and sludge worms. The algae, drifting in rafts two feet thick and miles across, was fed by a constant flow of agricultural, industrial, and municipal waste being dumped into the lake (Dennis 2003). This was apparent on the vessel that the class took on the lake. When grabbing sediment from the bottom we found trash and several species that were indicators in the reasons for the loss of oxygen. We found the main invader that has the lake screaming for oxygen, the Zebra mussel. The zebra mussel is an exotic and fast-growing species that increases the severity of hypoxia (Uz 2006). It does this by eating the phytoplankton and zooplankton that are produced from the excessive phosphorus inputs, which in return reduces both water-column transparency and dissolved oxygen levels (Ludsin 2001).

Making the Water Clean Again Through the Local Streams in Pennsylvania. (2021, Oct 31). Retrieved from http://envrexperts.com/free-essays/essay-about-making-water-clean-again-through-local-streams-pennsylvania 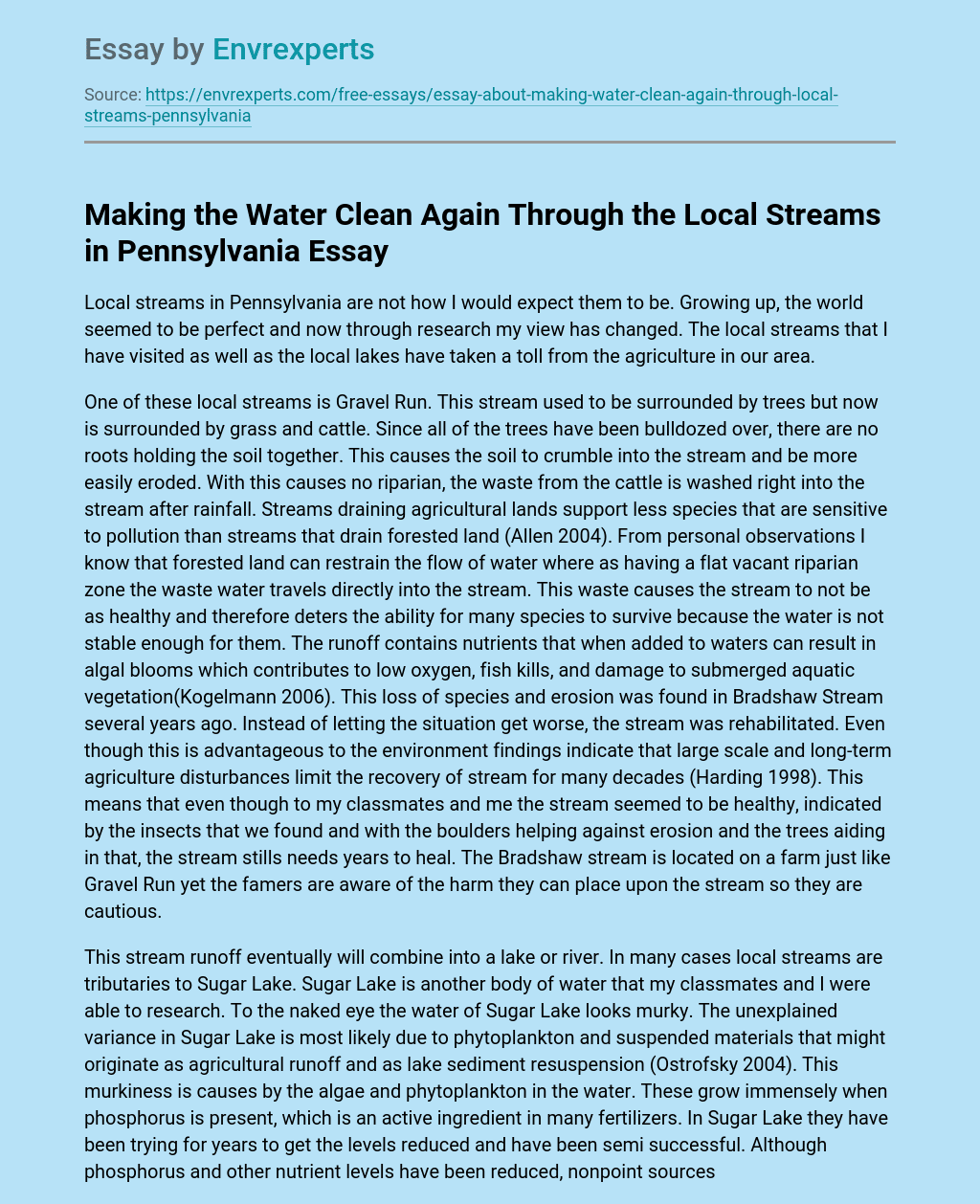