Background to the Study

The manufacturing sector with its forward and backward linkages, provision of essential consumables, its high employment potential and revenue generation capacity play a key role in the modern global economy. The demand for manufactured goods continues to rise as population and urbanization increase.

The Manufacturing sector currently contributes about 17 percent of the world\'s over US$ 80 trillion economy, and it accounts for over 70 percent of global trade in 2017 (World Trade Organization [WTO], 2018). With these facts, it is obvious that the manufacturing sector is the bedrock of every economy and catalyzes economic growth and development (Simon-Oke & Awoyemi, 2010).

Don’t waste time
Get a verified writer to help you with The Manufacturing Sector: Capacity Utilization and Output Performance
Hire writer
$35.80 for a 2-page paper

The manufacturing sector is a leading sector in many advanced economies in employment generation, increased incomes to individuals and the state, export and foreign exchange earnings as well as contribution to Gross Domestic Product (GDP). With increased competition due to globalization as well as world trade liberalization in almost all industries, developing economies are faced with the challenge of harmonizing their productive capacity with business performance in striving to at least remain relevant and to have a competitive edge in their manufacturing and consumption of manufactured goods through increased efficiency (Palmer & Torgerson 1999).

Privatization, trade liberalization and globalization are causing a transition in the world economy and Nigerian manufacturing is no exception. In the face of intensified global competition and a liberalized trade environment, an increase in manufacturing productivity has emerged as a major indicator of success in sustainable economic growth and development. Manufacturing sector productivity growth has traditionally been regarded as one of the main sources of income growth, capital accumulation and intensifying human capital development.

Winston (1974), postulated that increasing capacity utilization rates have contributed to the growth of manufacturing industrial output in some developing countries, as Increased capital utilization may be viewed as an alternative to capital accumulation. In many developing economies such as Nigeria\'s the vital economic resources such as capital equipment and skilled labor which are needed for rapid economic growth and development are both scarce and expensive and they are also paradoxically grossly underutilized.

Traditionally, the manufacturing sector in Nigeria has been dominated by micro, small and medium enterprises (MSMEs) that create jobs. In 2017, the manufacturing sector employed 5.3 million Nigerians (11 percent of the entire workforce) (International Labour Organization [ILO], 2017). The sector accounted for 9.20 percent of Nigeria’s GDP in 2018, 9.18 percent in 2017. However, the size of the sector\'s (9 percent) remains small compared with other emerging economies such as South Africa (12 percent), Egypt (16 percent), Mexico (17 percent) and Indonesia (20 percent) (The World Bank 2018).

From 1991 to 2000, it oscillated around 29.29 and 42 percent and averages about 53 percent from 2001 to 2010. The manufacturing output and the contribution of the sector to the GDP oscillated within the same period (Central Bank of Nigeria [CBN], 2016). In 2016, at the onset of the economic recession, capacity utilization in the sector contracted significantly by 7 percent and drops to as low as 48.46 percent from an average of 60.50 percent in 2015.

Capacity underutilization in the Nigeria manufacturing sector was attributed to several problems such as poor and inadequate infrastructural facilities and unreliable power supply that forces businesses to rely on generators, thus increasing their input costs and reducing their overall competitiveness and profitability. There is also the problem of low incentives put in place by the government to boost manufacturing productivity.

Another problem is the negative result of the influx and dumping of goods into Nigeria from Asian countries and the situation is further worsened by the unpatriotic activities of some unscrupulous individuals and businesses that embarked on massive smuggling and dumping of goods that can be produced in the country. These contributed to the quandary of manufacturing capacity underutilization and this could amount to a threat to the growth of productivity and output growth in the sector.

For many years, the Nigerian manufacturing sector has failed to undergo the needed critical structural transformation to achieve the efficiency necessary for it to play a leading role in the economic growth and development of the nation. The sector is structurally weak and the technological base for manufacturing is lacking or outdated and obsolete in many industries. The skilled manpower necessary to guarantee competitiveness in today’s dynamic and globalized world is insufficient.

Systemic issues of infrastructure, mostly related to power and transport, have led to escalating costs and non-competitive operations and low capacity utilization. Nigeria is a fast-growing economy, with a high level of population and population growth rate, the county has particular characteristics that make it different from the rest of the countries in the West African region. High urbanization and population density favor manufacturing and commercial activities which are a motivation for further research in the area of capacity utilization often neglected in the manufacturing sector all along.

Statement of the Problem

With its large reserves of human and natural resources, Nigeria has much of the needed resources to build a prosperous economy, significantly reduce poverty and create wealth through manufacturing. Manufacturing is the core mover of industrialization as it plays a unique role because it has strong linkages with all other sectors of the economy. A robust manufacturing sector that is devoid of inefficiency and idle factor (that characterized and continues to haunt Nigeria’s manufacturing sector for decades) is critical to achieving these objectives.

A vibrant and efficient manufacturing sector that will harness Nigeria’s large domestic market for manufactured goods through the utilization of abundant resources will ensure a steady supply of products that are vital to the nation and the economy as a whole. Capacity utilization rate plays an important role in assessing the economic performance of manufacturing firms; it is an important factor to be considered when an increase in output or productivity and expansion of a firm’s production is desired. The need to consider capacity utilization is imperative in many developing economies especially in Nigeria where capital is very scarce and mostly underutilized (Adeyemi & Olufemi, 2016).

If manufacturing firms plan and operate at an ideal capacity utilization rate, where they can match as closely as possible their manufacturing capacity to their business requirements and prevailing production activities, they would be more than likely to realize an improvement in their production efficiency. This improvement in production efficiency would translate into more output, lower prices, customer satisfaction, and loyalty. Also, an increase in market share, an increase in profitability, and general business and economic growth (Lansik, 2000).

The emphasis of the current Government in its economic reforms to promote local production and consumption of manufactured goods by boosting manufacturing capacity utilization of firms producing in Nigeria which is often neglected in manufacturing firms is inconsonant with the theory of economies of scale which stipulates that a cost-minimizing firm has a tendency to increase the utilization of its capital if the returns to scale decreases as its production increases (Afroz & Roy, 1976).

This study sought to determine the relationship between Nigeria\'s manufacturing sector average capacity utilization and output between 1985 and 2018. Whilst being a modest attempt to bridge the gap built by the passage of time with major changes occurring in the operating environment and performance of the sector. The study will be guided by the following research questions:

Objectives of the Study

The broad objective of this study is to analyze the relevance of average manufacturing capacity utilization on output of the manufacturing sector with specific reference to Nigeria. For achieving the research goal, this study will investigate the following specific objectives:

Significance of the Study

As understanding, this relationship is also important for both the manufacturers and policymakers in predicting the future competitiveness of the industry and the growth of the economy. Stakeholders in the manufacturing industry shall gain more by understanding from the findings of this research that operating at the best and efficient capacity utilization production level will lead to an increase in output, reduction in production costs as well as increase in the level of profitability. These will, in turn, stimulate economic growth via increases in the level of utilization and employment of productive resources, increase in income, employment, revenue generation, etc.

In line with the above, I hope that this study will highlight how manufacturers in Nigeria will be able to manage their capacity utilization, in spite of numerous challenges to increase their production efficiency and gain competitive advantage in the global market or to at least remain relevant even in the domestic market being the worst scenario. This work shall identify constraints and points of intervention that will assist government policymakers to introduce policies and programs that will stimulate manufacturing capacity utilization. The implementation of the findings would translate to increased output of the manufacturing sector.

Furthermore, it is intended that this study will inform policymakers towards incentivizing to improve efficiency in capacity utilization of manufacturing as a way to realize macroeconomic objectives. I hope that the study will contribute greatly to the existing body of knowledge and will also pave the way for further empirical researches.

Scope of the Study

Organization of the Study

This study is divided into five main chapters; following the introduction to the study already given in chapter one, Chapter two shall consist of definitions of key concepts; discussion on the relevant theory as the basis of the research work; and a review of empirical literature on manufacturing capacity utilization and output, also, gaps in the literature shall be identified. Chapter 3 shall be devoted to the discussion of the research design techniques; type and sources of data to be used; the specification of the model and description of variables, an a priori of the economic relations of each of the parameters of the explanatory variables with the dependent variable; and procedures or techniques of data estimation. Chapter 4 shall be used to present research findings. Finally, Chapter 5 shall contain the conclusion and recommendations. 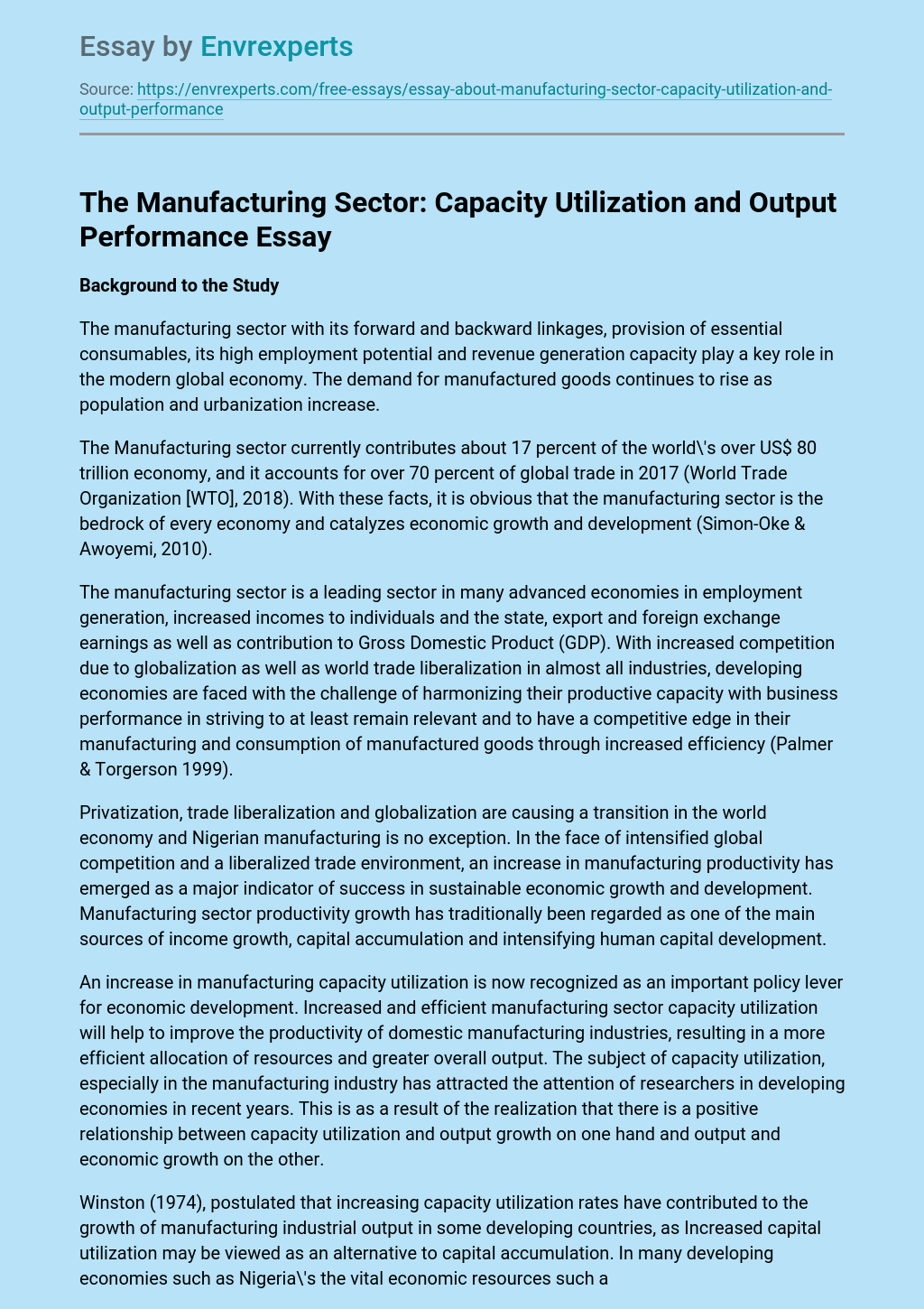