Medicinal Plants as a Unique Product

Medicinal plants have been exhibited as natural resources of compounds with pharmacological and nutritional properties aiding humans to prevent and treat diseases. Moringa oleifera (Musaceae) which is native to India grows well in the tropical and subtropical regions of the world. It is commonly said as drumstick tree or horseradish tree. The parts of the plant is very much suitable for both nutritional or commercial utilisation.

The leaves are a major source of minerals, vitamins and some essential phytochemicals. M. oleifera leaves are rich in beta-carotene, vitamin C, vitamin E, and polyphenols and a source of antioxidants. Currently, M. oleifera is reported to enhance a broad range of biological functions including anti-inflammatory, anti-cancer, hepatoprotective, neuroprotective functions and as potential antioxidant, anticancer, anti-inflammatory, antidiabetic and antimicrobial agent.

It is widely used as an antioxidant, anti-inflammatory, antidiabetic, anticancer, and antimicrobial agent world wide. Phytochemical analyses have shown that the leaves are rich in various minerals, vitamins and antioxidants. Neurodegeneration are chronic diseases of the nervous system.

There is currently an increase in natural products usage to fight these debilitating diseases. Till now no cure has been found, and the conditions are managed and the symptoms are treated. This study provides an overview on the cultivation, nutritional values, medicinal properties for commercial use and pharmacological properties of moringa. There are no elaborate reports on treatment of excitotoxicity using moringa.

This study aims to bridge the gap. Acetylcholinesterase (AChE) is a glycoprotein that exists in several forms which catalyses the metabolism of acetylcholine and of some other choline esters which act as neuro transmittors.

ACh is released from presynaptic to the synaptic cleft and will binds to the ACh receptors on the post-synaptic membrane during neurotransmission. AChE located on the post-synaptic membrane which will terminate the signal transmission by hydrolysing the ACh. The released choline is taken from the pre-synaptic neuron. Then the ACh is synthesized by the combination of acetyl-CoA by the action of choline acetyltransferase.

Docking methodology The ligand and the proteinarrangements can be done by a set of values which describes the translation, orientation, and conformation of the ligand with that of the protein. Every Person is mutated to acquire a different translation and rotation and a local search algorithm will performs energy minimizations on the population of individuals. The person with a low resulting energy is moved to the next generation and the process is then cycled. The algorithm is called Lamarckian. This is because every new generation of individuals is allowed to inherit the local search adaptations of their parents. Lamarckian genetic algorithm was used for ligand conformational searching, which is a hybrid of a genetic algorithm and a local search algorithm. This algorithm first builds a population of individuals (genes), each being a different random conformation of the docked molecule.

The crystal structure of acetylcholinesterase (3lii) protein database was downloaded from the research collaboratory for structural bioinformatics (RCSB) protein data bank. For the correct calculation of partial atomic charges the target protein 3lii was prepared with the AutoDock Tools involved adding all hydrogen atoms to the macromolecule. The major constituents in plants like Apigenin, Catechin, Chlorogenic, Ferulic acid, Gallic acid, Luteolin, Quercetin acid, Tocopherol, Vanillin and rivastigmine were built using ChemSketch and optimized using “Prepare Ligands” in the AutoDock 4.2 for docking studies.

Three-dimensional affinity grids of size 277 × 277 × 277 Å with 0.6 Å spacing were centered to the geometric center of the target protein. It was calculated for each of the following atom types: HD, A, N, C, OA and SA, representing all possible types of atoms in a protein. Docking calculation in AutoDock 4.2 was performed using the refined protein and the desired ligand in pdb format. Running AutoGrid calculation is carried out by the .glg file. Running AutoDock is carried out by the .dlg file.

Finally 10 different docked conformations were studied for a single compound. The parameters like binding energy, intermolecular energy and inhibition constant were studied for all the selected flavonoids. For each ligand, 10 best docking simulations were obtained against the target molecule. AutoDock 4.2 was run numerous times to get different docked conformational poses. Based upon the docking parameters obtained using AutoDock 4.2, the flavonoids was selected for further in vitro studies. \nIn vitro methodology: Rivastigmine, acetylcholinesterase was purchased from Sigma Aldrich, St. Louis, MO.

All other drugs and chemicals used in the study were obtained commercially and were of analytical grade. 30g of shade dried power of the plant has to be soaked in distilled water for 24hrs and in ethanol for 24hrs followed by filtration using muslin cloth. The filtrate needs to be heat dried using hot air oven at 60°c. In vitro acetylcholinesterase inhibition The assay for the measurement of the enzyme inhibition was carried out based on Ellman method.

About 1.3 ml of the Tris-HCl buffer (pH 8.0; 50 mM) was treated with 0.4 ml of different concentrations (0.2 to 5.1 µg/ml) of the drug solution and to it 0.1 ml of the AChE (0.28 U/ml) was added. This mixture was incubated for 15 minutes and to it 0.3 ml of Acetylthiocholine iodide (0.023mg/ml) and 1.9 ml (5,5\'-dithiobis-(2-nitrobenzoic acid) DTNB (3 mM) solution were added. This final reaction mixture was kept for further incubation at room temperature for 30 minutes and the absorbance of the reaction mixtures was taken at 405nm. The assay was done in triplicate and the results were expressed as mean±SEM. The percentage inhibition was calculated for the selected flavonoids.

Medicinal Plants as a Unique Product. (2021, Oct 31). Retrieved from http://envrexperts.com/free-essays/essay-about-medicinal-plants-unique-product 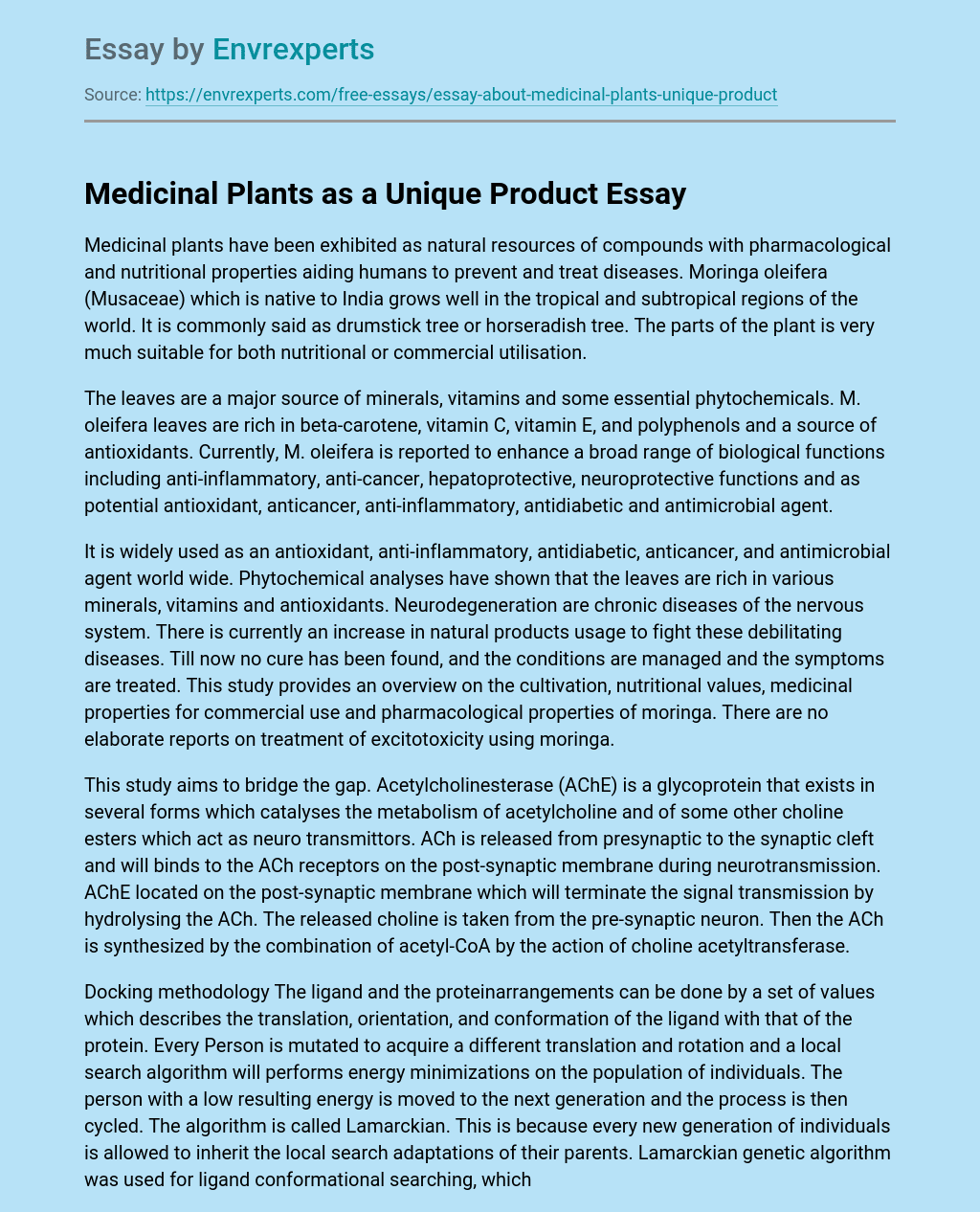