Research question: How are non-human primates endangered because of biomedical research? Why is this still necessary, even in the world of modern medicine?

There are millions of animals that are living on this earth. Many of them are captured or bred in laboratories. In these laboratories, they are experimented on for a wide variety of medical testing. Some of the testing that takes place in the laboratories are: This research paper and project is an in-depth look at non-human primates in medical research.

Don’t waste time
Get a verified writer to help you with Medicine and Endangered Primates Problem
Hire writer
$35.80 for a 2-page paper

I have loved animals ever since I was a little girl. When I was told to come up with concepts, questions, ideas, and statements for this project, I knew I wanted to do something involving animal testing. Originally, I was going to do a wide variety and just study animal testing. After researching the topic I chose to narrow it down and study a field of animal testing, or in this case non-human primate testing. All animals deserve a chance in the wild, a chance to be and do what they are naturally meant to be and do!( revise this sentence) So why aren’t these animals given that chance? Why do we take away those rights for medical research? Why, in the world of modern medicine, do we continue to test on animals? How and why are we endangering these animals? Those are some of the questions that have shaped this project, along with; What is Biomedical Testing? THESIS: Animal testing is inhumane to the animals that endure the medical experiments performed on them.

In this modern society, there should be the resources and desire to find alternative methods to biomedical testing on non-human primates.

Non-Human Primate Research History, Practices, Benefits, and Dangers: Biomedical testing, according to Google dictionary, means “relating to both biology and medicine”. In other words, it means the testing of biological science and medicine on living organisms and beings. The testing of biomedical research on non-human primates is the testing of diseases and medicine on living monkeys. “The relationship between medicine and the study of life is as old as medicine itself,” stated the NCBI. Historians say that biomedical research began in the nineteenth century when physiology and bacteriology first became important in resources for the identification, diagnosis, and treatment of human diseases. The first known people to touch base in the field of veterinary medicine began around 9000 BC in Middle East countries. Sheepherders had a crude and slight understanding of medical herbs and resources that were used to treat their dogs and other animals. From 4000 to 3000 BC, Egyptians took earlier medical skills and made further advancements. Historical records and Egyptian hieroglyphs record how they used herbs to treat and evolve good health in domesticated animals. A catch twenty-two is that in order to provide veterinary medicine for animals, animals must first be tested on with the products. So the veterinary medicine supporting animal health is first endangering animals through testing. Biomedical research being tested on animals can help benefit them too. It has resulted in some remarkable lifesaving and life-extending treatments for cats, dogs, farm animals, wildlife, and endangered species. Most biomedical research with lab animals advances veterinary medicine as well as human medicine and helps pets and wildlife live longer and healthier. Many diseases, from cancer to epilepsy, affect both animals and humans. Vaccines that treat humans benefit animals too. Animals are being endangered because of animal testing. Some facilities strive to keep their animals breeding in order to prevent extinction. Most animals in the biomedical and general testing fields are not facing extinction because of this. Despite their prevention of extinction, animals are still endangered. Not globally, but individually. To oversee and accomplish just one experiment is putting and animal’s life on the line. There are thousands even millions of animals who have suffered or died from experiments. Not just in the Biomedical field but in, makeup, food, feminine hygiene products and more. Most things we consume and buy on a regular basis are likely to be tested on animals, and we might not even know it. Your face wash or tampon brand could have put animal’s lives on the line. We should ask ourselves if these types of businesses we want to promote.

Animal testing has made breakthroughs and medicine to help treat many different diseases and injuries. This includes Paralysis, with the use of animal models, researchers are able to develop potential spinal cord therapies to regrow neuron connections, enabling recovery of sensations and motor functions. HIV/AIDS, Researchers are currently working on an HIV vaccine with hopes to destroy the disease in our lifetime. Animal models, especially non-human primates, have been crucial to the research and development of existing and future treatments for HIV/AIDS. Lawmakers have recently increased efforts to introduce laws that would require strict reporting requirements on medical research involving monkeys and other non-human primates in biomedical testing facilities. The goal is to substantially reduce such research. restrictions could endanger lives. Primate research has led to some of the most important breakthroughs in medical history and has major potential to unlock treatments for the world\'s deadliest diseases in the not too distant future. By endangering and potentially putting the animals through extreme discomfort and pain, we are giving medical advancement a chance to further grow and help people.

The main reason for using monkeys in medical research is because, unfortunately, non-human primates have the closest DNA and genetic makeup to humans when compared with other animals. Scientists are constantly trying and testing possible solutions to the problem with testing on animals. Involving microcells and machines, to hopefully replace animals in all forms of testing, not just biomedical. You would imagine that in the world of modern medicine, scientists would have already made a breakthrough or a replacement by now. But there is a lot more to creating microcells and machines that genetically make up a human body and all of its bits and pieces, then you think. Recently, the US National Academy of Sciences has proposed a combination of techniques that reduces the need for animal experimentation. These include testing cells in the laboratory, computer modeling, and adv tools in molecular biology. To protect human health and the environment, it is essential to have accurate information on the effects of exposure to chemical, physical and biological projects and substances. It is also important to do basic research to understand the human body and the diseases that can affect it, and to test any medicines or vaccines before they are given to humans. That is why it is important to collect accurate genetical research, unfortunately, this involves non-human primates.

Do scientists and or caretakers make an effort to create a happy, healthy life for the non-human primates while within research centers?

Animal care for nonhuman primates in biomedical facilities has undergone major changes in the past few decades. Today, most primate facilities have dedicated and highly trained animal care technicians who go to great efforts to ensure the physiological and psychological well being of the primates in their charge. These caretakers work closely with the animals, and as a result, often develop strong relationships with them. Once discouraged and considered a potential threat to scientific objectivity, such positive relationships are now seen as important components to animal care. Positive interactions between caretakers and primates can benefit the primates by reducing their stress and improving their overall well-being which can, in turn, help the scientific endeavor. Further, providing the best possible care is our moral responsibility. Today, animal care practice consists of more than simply feeding animals and removing waste. Biomedical facilities have dedicated and highly trained animal care technicians, who are taught to notice the signs of pain and distress in the animals. Most primate facilities have at least one full time veterinarian; the larger primate centers typically have several, some of whom are specialists in areas such as dentistry or surgery. Further, an increasing number of primate facilities have one or more behaviorists who attend to the psychological well being of the primates. Such high-quality care requires the dedication and devotion of those working with the primates, especially the caretakers who often form very close relationships with these animals. While this level of care is vital to the scientific endeavor, there are inherent and undeniable ethical and emotional challenges and dilemmas associated with forming close relationships with subjects of animal research. This commentary will discuss some of the scientific, moral, and emotional issues associated with caring for nonhuman primates in research facilities. 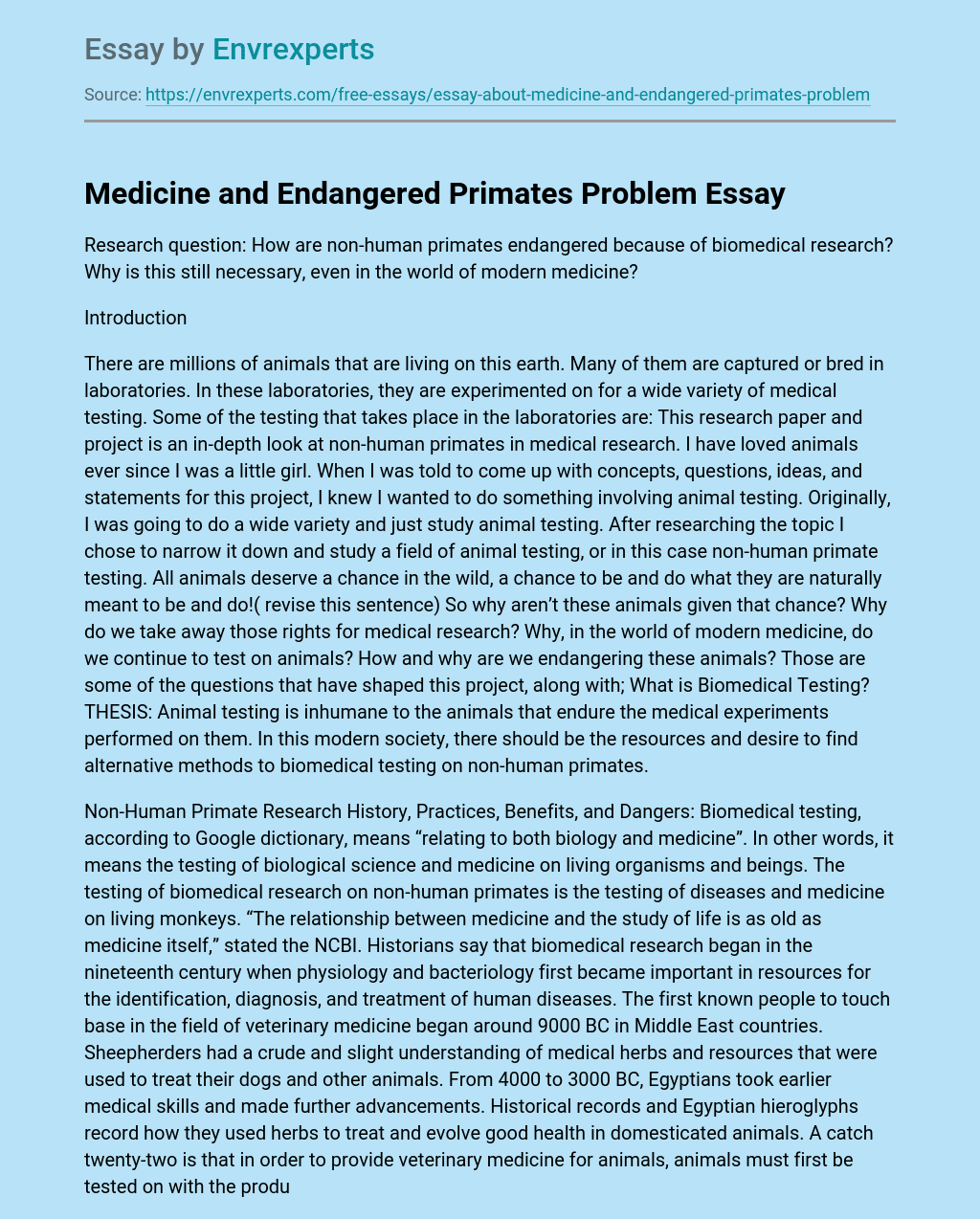