The Metamorphosis of Plants

Splicing plant varieties enables more than one kind of fruit or flower to coexist on the same body, or sometimes, varieties merge in such a way that the rootstock takes on the characteristics of the graft (Melnyk, 2015: 183). In both scenarios, grafting yields unlikely amalgamations and hybrid mixes. Unearthing a conceptual understanding of grafting seems to likewise propose novel encounters between different modes of thinking, from philosophy and literature, to the natural sciences. In actual fact, the cross-pollination of plant science and philosophy has roots that reach back to the 1700s, when the German poet and philosopher Johann Wolfgang von Goethe published The Metamorphosis of Plants.

Don’t waste time
Get a verified writer to help you with The Metamorphosis of Plants
Hire writer
$35.80 for a 2-page paper

Goethe emphasised the mutability of vegetal life, and rather than excluding issues of meaning and metaphor, saw these as essential to a scientific investigation of plants (2009: xvi). Whilst he did not address the graft directly, his thinking seems to presage the essential exchange inherent in its processes.

Goethe proposed a participatory way of knowing the natural world, based on a relationship between organisms and their environment, such that the outer world calls forth the inner world and they meet and participate in one another.

In this sense, the world depends on the subject for its completion just as the subject depends upon the world to bring it to its senses, they meet in the middle and the interplay gives rise to a growing, budding world of living phenomenon (2009: xviii).

There is a resonance of interconnection and reciprocity in this way of understanding phenomena that reflects the characteristics of the graft in process.

Grafts unfold in such in-between and contingent spaces. In recent decades, critical theory has leaned heavily into ecology (in the manner of a graft) and we’ve seen the emergence of new inter-disciplinary fields related to the non-human- critical plant studies is one of these new eco-disciplines. Philosophers of this inclination are explaining key concepts and notions through vegetal processes, images, and metaphors.

They believe that understanding botanical life can have a essential significance in how we reflect on our own conceptions of ethics, politics, and philosophy in general. A key theorist in the field, Michael Marder believes that plants play a much more important role in the formation of our thinking, and culture than we realize. In Plant Thinking: A Philosophy of Vegetal Life, he argues that plants generate ideas that shape our relationship to the world. Grafting, for example, is not only a vegetal process, but also a mode of vegetal conceptualisation (2016: 8).

It has its origins not in the human activities of horticulture- that came later – but in the activities of plants themselves. The first grafts were naturally occurring homografts where partial plant bodies fused into each other, becoming grafted over time. These homografts served as inspiration for the human horticultural practices. For Marder, grafts themselves are the prototype par excellence for the exigencies of fusion, connection and relationship that plant life can elucidate. Grafting foregrounds: the receptivity and plasticity of vegetal life, its constitutive capacity for symbiosis and metamorphosis, its openness to the other at the expense of fixed identities (even the identity ensconced in genetics), revealed by their very vitality, as illusory. (Marder, 2016:10)

Grafts unfold with a kind of imperceptible motion in the in-between space between merged bodies. To graft is to harness the vegetal principles of movement, transformation, growth and ultimately decay. \n\nGrafts and texts Grafting was an important metaphor for the French philosopher Jacques Derrida. The literary critique of the 1960s, saw Derrida develop a form of semiotic analysis known as deconstruction.

Deconstruction is concerned with the manner in which we read and think about texts and other modes of representation (Jencks, 2011: 209). In it we can perceive parallels to the material processes of grafting. Writers who create texts or use words do so on the basis of other texts and words they have encountered, while readers deal with them in the same way.

Cultural life is then viewed as a series of texts intersecting with other texts, producing more texts. (2011: 209) Deconstruction interrupts traditional philosophical and cultural ideas about the interpretation of texts and proposes something more live and unpredictable, so that what we write contains meanings and associations that we could never have intended.

The intertextual weaving has a life of its own. ( 2011: 209) Risk and contingency are inherent in the process, and we must acknowledge that we do not have full control over the understanding of our words. Grafting similarly necessitates a kind of exposure and openness to risk: Membranes, tissues, liquids, and surfaces must be exposed to each other in all their nudity for a graft to work. (Marder: 2016: 2) In her analysis of his 1974 work Glas, Claire Lozier argues that Derrida’s writing addressed the graft at the same time as it practiced it, with sutured quotations, imported texts and intertextuality (2008: 63).

Lozier explores whether the deliberately grafted quotations serve to enhance the text- so that it operates in an expanded way- or whether the grafting process in fact results in the monstrous. She concludes that: Derrida’s writing can be said to be monstrous: [as it] exhibits its grafting process…the graft does not seem to take- and this its work- as the pieces are simply put next to (sometimes into) each other, requiring the text reader to realise the stitching process during his or her own reading. (2008:64)

The points of adhesion in the intertextual weave are jarring, incongruous. A graft is, by its very nature, an imposition and this is something that Derrida deliberately harnessed and accentuated for his own conceptual and aesthetic ends. The text [Glas] is so grafted that it becomes cracked and distorted and eventually annihilates the finality of its own end. (2008:64) In the amalgam of bodies- the attendant cutting, suturing and binding of limbs- a seamless graft is improbable.

Despite intentions, transposing a graft onto a body, without regard for either one’s specificities can lead to rejection or suffocation- the failure of the graft (Marder, 2016: 12). Whether monstrous, or falling/failing in more subtle ways, the graft that does not take emphasises an asymmetrical or unreciprocated exchange between host and scion- a missed connection, a misunderstanding. For the graft to adhere and engender a mutually transformative influence requires time, and the considered attention of the horticulturist.

The Metamorphosis of Plants. (2021, Oct 31). Retrieved from http://envrexperts.com/free-essays/essay-about-metamorphosis-plants 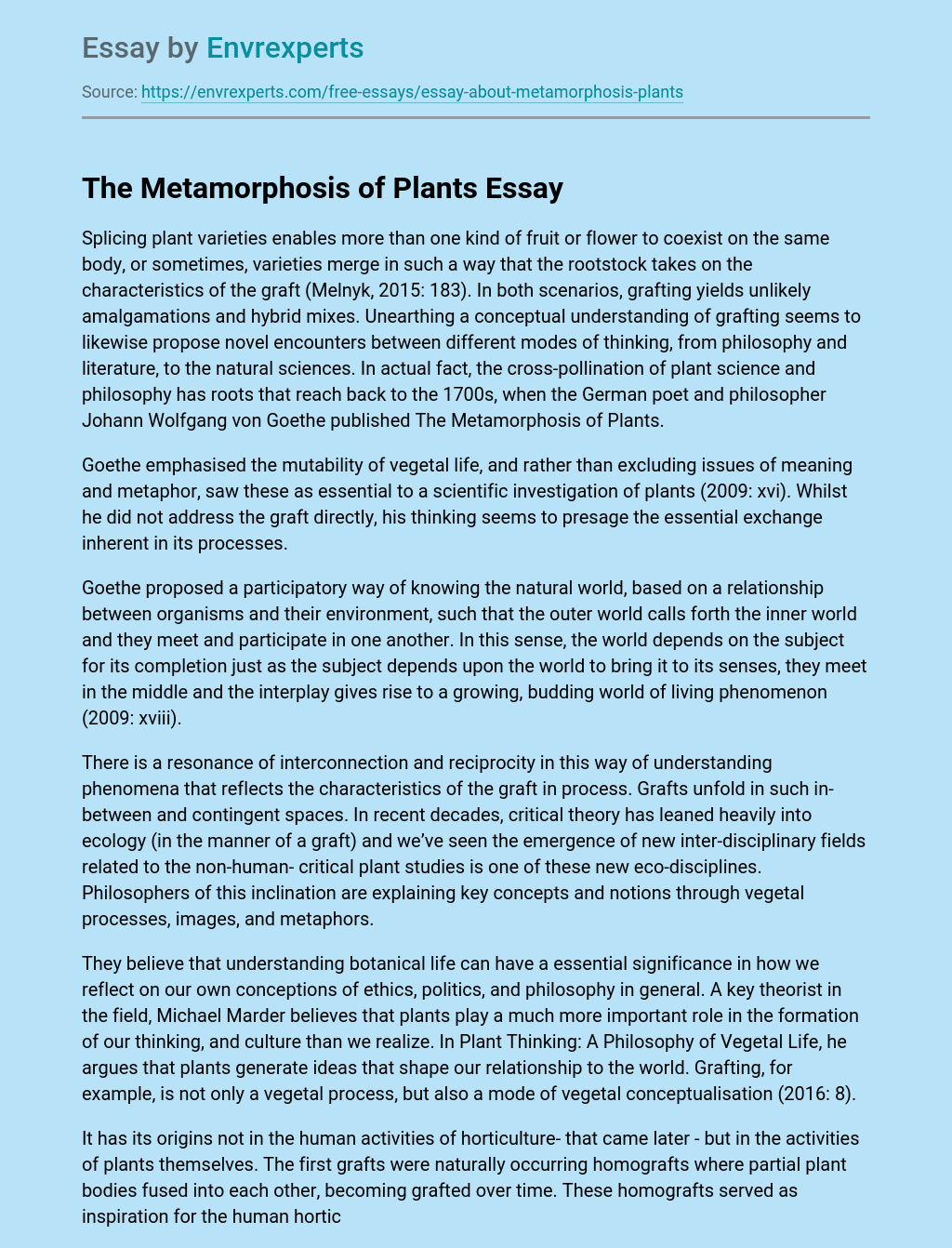