Main issue arising now days is the invasive alien species on which thousands of dollars are being invested to control. They are the main factor for the global change in ecology (biodiversity), economic (forestry and agriculture), and health (allergies and diseases) (Ng et al., 2018). Living and nonliving components of soil synergistically shape the growth of exotic invasive species in the main habitat. More the biodiversity rich area less is the invasion (Souza et al., 2011). The introduction of species depends on three factors introduction effort, abiotic and biotic factor, and environment resistance (Soti et al.

Don’t waste time
Get a verified writer to help you with Monopolization of Invasive Species
Hire writer
$35.80 for a 2-page paper

, 2020). Several studies compare the geographic range of the invasive species and their interactions and their interactions with soil microorganisms and plant growth (Volin et al., 2009). While now a great interest in microbiome o the alien species E.g. pH is the main component for deciding the flowering range in the forest. Few elements like phosphate, calcium, magnesium can be the limiting factor for the plant growth. Symbiotic association with microbes and fungi play a significant role in the growth.

Once the factors are favourable for the alien species increase in size and grow (Soti et al., 2019).

Here a Lygopodium microphyllum native to Australia is alien species in southern and central Florida which occupied all freshwater and moist habitat. It is capable to grow in varying water, nutrient, pH, and strong symbiotic relation with AMF. Analysis was done in its natural habitat and invaded land (Soti et al., 2014). L. microphyllum show to choose the sandy soil Moreover, its interaction with the AFM and roots was more in sandy soil of Florida than Australia.

Although it does not have much economic value in Australia. It is highly virulent so, current methods such as fire, herbicides, and mechanical methods are not enough. For controlling, the soil characteristics are explored in both regions for that both living and non-living components and thin characteristics are checked. Hypothesis was proposed that main land soil is poor in nutrients and highly phototoxic compared to Florida. in site selection 3 samples were taken from each Queensland, Australia and Florida, United States. Both the places have similar climate condition i.e. temperature, rainfall, humidity. In Australia L. microphyllum mostly grows near Melaleuca quinquenervia but in Florida it grows near Drynaria sp. and Blechnum indicum. In Florida it has adapted to variable water conditions. Samples were collected from a seasonally flooded area, undisturbed sand pine scrub, and sand mine spoil.

Dry season was chosen for sample collection expect central Florida. 1m ×1m plots were chosen randomly, 10-15 cm deep soil from each corner was mixed properly into one bigger sample for each plot. The 6 mixed soil samples from Florida and Australia were transported and stored at 4°C. in analysis small amount of sample was air dried and passed through 2mm pore for analysis of physiochemical properties. Then sample was grinded into powder and stored at room temperature in airtight container for nutrient and trace element studies. Sample went through several analysis i.e. pH measure by pH meter, texture by Hydrometer, organic texture by ignition method, C and N by CN Truspec analysers, several different soil elements like Ca, Fe, Mg, Al, P etc were analysed in different laboratories around Florida by acid digestion. Where 1 gm sample is mixed with 10 ml of 30% HNO3 in glass tube attached with vapour recovery system. Heating of tube at 95 ± 5°C for 10 min without boiling. Sample was cooled to 40°C then addition of 5 ml HNO3 than again heated to 95 ± 5°C till brown fumes visible. After cooling at 40°C, 2 ml of DI water + 3ml of 30% H2O2 and heated till bubbles appeared. Again, cooled and diluted with 50ml DI water, centrifugation at 2000 rpm for 10 min done and then filtered with Whatman 41no. filter paper.

Microbial and fungal colonies were determined by spread plate dilution method. For that 1 gm sample mixed with 9ml sterile water and diluted. Sample was mixed energetically while diluting to help remove the microbes from the soil sample. Dilution of 10-2 to 10-5 for fungi and for bacteria 10-4 to 10-7 for bacteria. The 100µl of sample was poured in 3 petri plates for each dilution. When cultivate for bacteria nutrient agar include cycloheximide to avoid fungal blooming and rose Bengal agar included with streptomycin sulphate to avoid bacterial blooming and brood at 26°C for 3 days.

Past study concluded that mycorrhizal pioneering in roots were excessive in foreign land than the local land (Soti et al., 2014). This study is focused on the morpho sp. of AFM in soil near L. microphyllum in both the lands by wet sieving technique. Foe this 100 ml DI water was mixed with 50 g soil sample from each area. It was mixed energetically to discrete spores from sample and then separated through different sieves. The particle on the sieve were washed and centrifuged with H2O to discard the debris and supernatant was rejected. The pellet was re-suspended in 50% sucrose and centrifuged at 2000 rpm for 1min. 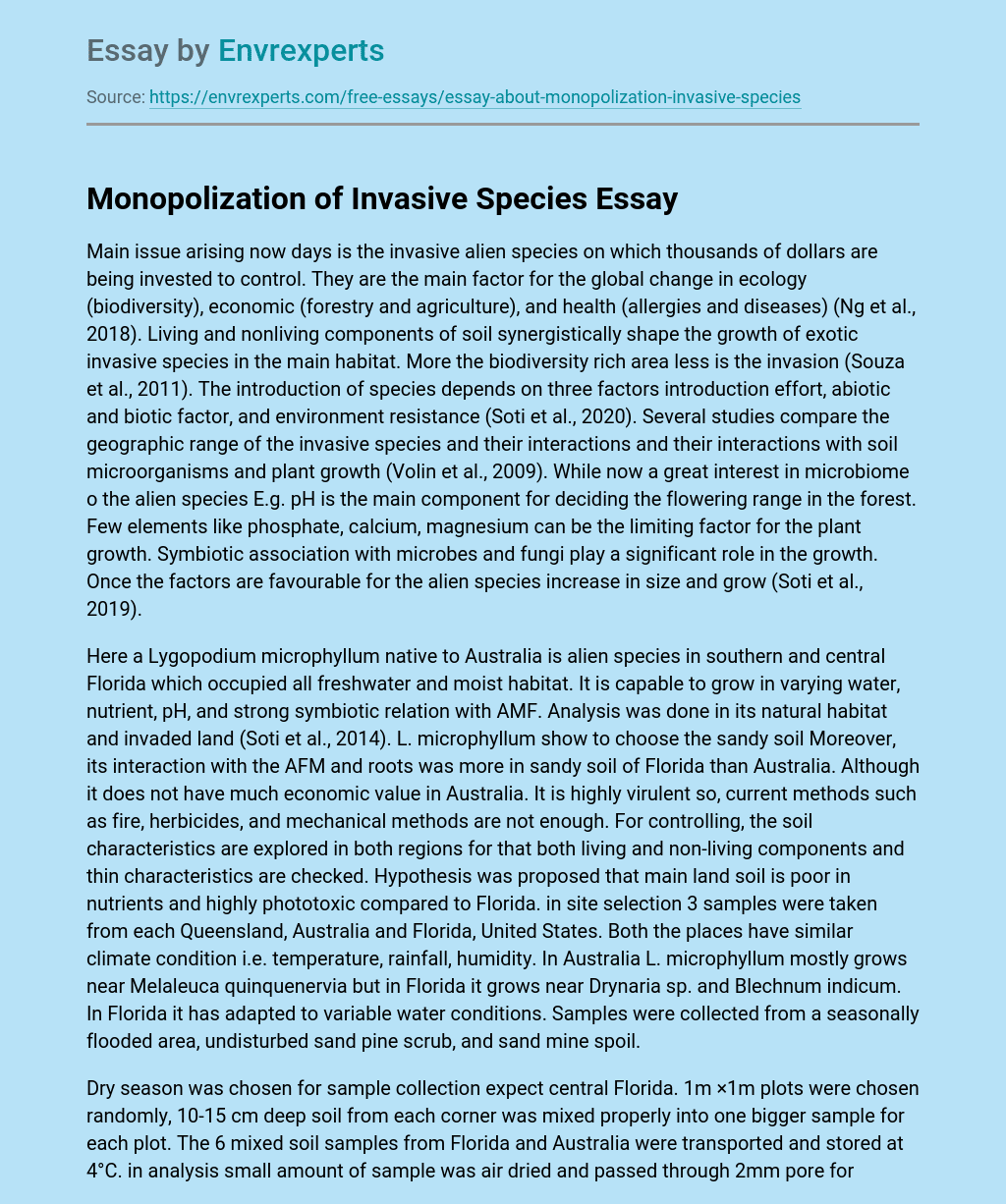