Monopoly in the World of Nature

According to William J. Baumol (1977) “In an industry where a single firm can produce output to supply the entire market at a lower per-unit cost than can two or more firms (subadditivity of the cost functions) or in an industry to which entrants are not ‘naturally’ attracted and are incapable of survival, even in the absence of predatory measures by the incumbent monopolist (sustainability of monopoly) the single firm is called a natural monopoly.” (W.F.Depoorter, 1999).

Natural monopolies are often common in the industries which has high initial capital investments for building infrastructures such as electricity grid, water or gas pipelines and train network and has huge barriers for new entrants and leaving the market solely for one firm without competition. In Afghanistan electricity services are provided by only one company, Da Afghanistan Breshna Sherkat (DABS – Afghanistan National Electricity Company) hence turning it to a natural mmonopolist.

Natural monopoly particularly electricity provision is a common phenomenon globally; however, in most of the underdeveloped and developing countries it has been a hectic.

Considering this all countries have gone through series of reforms and restructuring in such utilities. Most of the developed countries, with high efficiency, have services in unbundled structure and provided a competitive but regulated market for the electricity services unlike to that of developing and less-developed economies that still have centralised monopolised, state-owned and operated electricity utilities.

This has become highly important policy problem due to the fact that monopoly gives a lot of power to the existing state-owned enterprise called Da Afghanistan Breshna Sherkat hereafter referred to as DABS (Afghanistan National Electricity Company) without having any competitors and also not being sufficiently regulated.

This situation has led to sever inefficiency in the services; making electricity services expensive and unaffordable and endangering the sustainability of the sector as whole.

Failure of the sector will result in complete blackout; hence in hampering performance of economy. It is important mentioning that Millennium Development Goals previously and now Sustainable Development Goals clearly spells out provision of affordable and sustainable electricity and considers this important for sustainable development (Modi, McDade, Lallement, & Saghir, 2005). under ASDG 8 and 9 (A-SDG, 2018) DABS in order to meetup the electricity demand the company without having any competitor will have to expand in size meeting up overall operations national wide and requires investments worth of 10.193 billion in US dollar (Fistner Company, 2013).

In such circumstances the state-owned monopoly needs billions of investments firstly and secondly being too big becomes difficult to manage and consequently inefficiency will rise to its peak; resulting in poor and unaffordable electricity services. Moreover, in case of high inefficiency the chances of company going insolvent, failing to pay its debts, gets high and resulting in failure as concluding the DABS previous five years audited financial reports. According to J. Energy Security (IAGS), there is also a strong relationship between per capita electricity consumption and human development and Energy is top economic development driver and the only economy’s hope, spelling out electricity as the motor that powers Afghanistan’s growth (Oskarsson, 2012).

Despite progress and efforts to date, the existing governance arrangements and policy framework for the sector are still insufficient to support a market-based energy system (Danish, Sabory, Senjyu, & Ahmad, 2017) The major players for governing, regulating and service provision of electricity services primarily Ministry of Energy and Water as primary policy maker, regulatory body and shareholder of DABS, Ministry of Finance as majority shareholder of DABS and state’s financing agency and policy maker, Ministry of Economy and Ministry of Urban Development and Housing other important shareholders (Ministry of Energy and Water, 2015) (DABS – Statutes, Official Gazzate (OG 0945), 2008).

Besides Office of the President’s Senior Advisor in Infrastructure and Energy issues is responsible to coordinate amongst the existing actors to deal with the electricity related policy issues and infrastructure development and advice the President accordingly. In addition, The Inter-ministerial Commission for Energy (ICE) was established by Presidential Decree on 7 November 2006 to provide a platform for coordination for energy sector activities in Afghanistan.

In addition, policy related decision making is discussed and followed by Inter-ministerial Commission for Energy (ICE), this is chaired by the Minister of Economy and includes all the major energy sector stakeholders in Afghanistan (government ministries/agencies and development partners). ICE was enacted by the presidential decree dated 7 November 2006 (ICE-Afghanistan, 2006),

Monopoly in the World of Nature. (2021, Oct 31). Retrieved from http://envrexperts.com/free-essays/essay-about-monopoly-world-nature 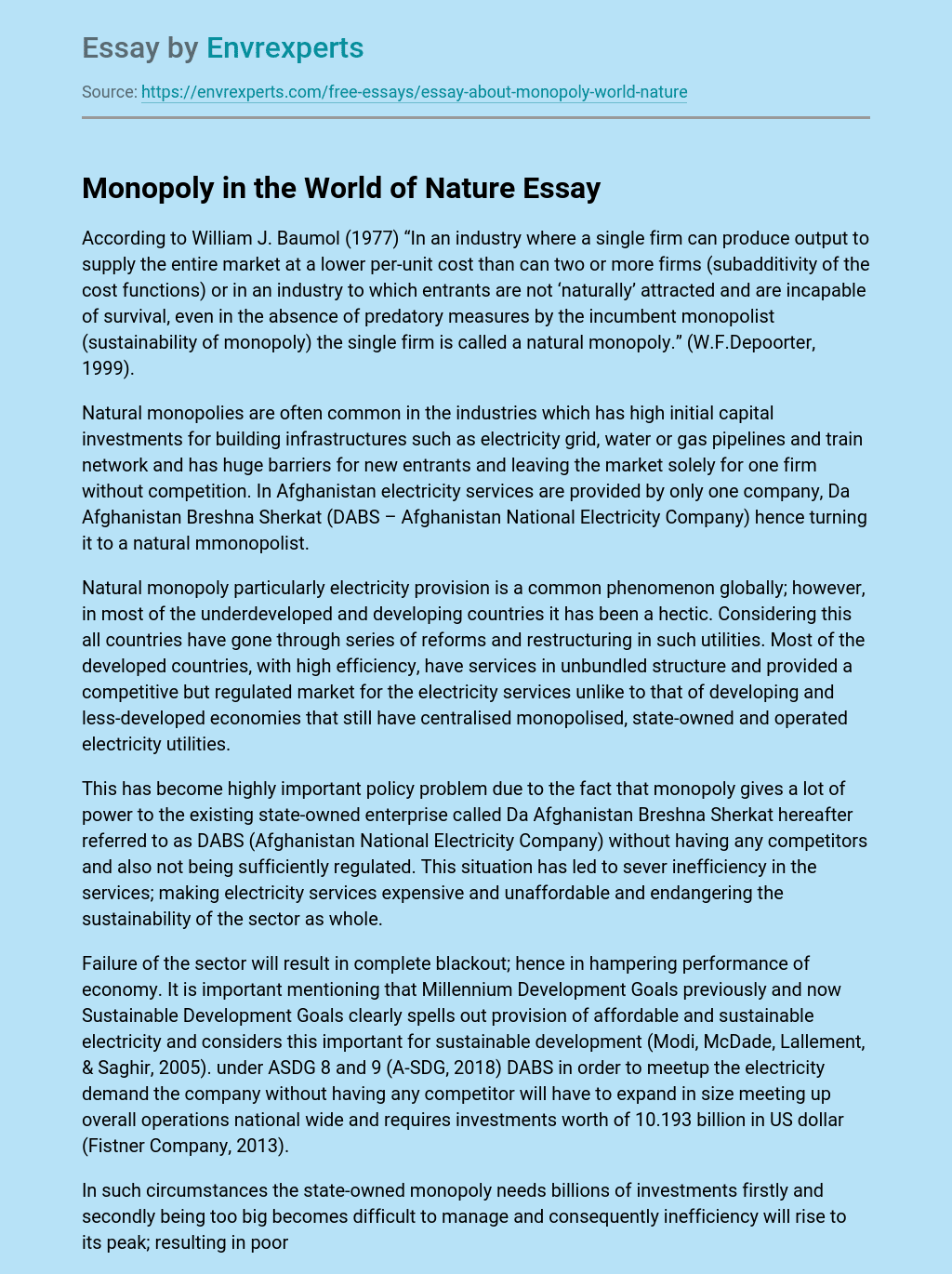