The Monster Snaps His Jaws by Laughlin: The Attitudes of Contemporary American Culture Towards Nature

The death of someone can be hard on a person, but the death of a tree can be hard on nature. The fight to not be cut down and left as stump is common in today's day and age.In a time of deforestation, “The Monster snaps his jaws” by Clarence John Laughlin, reveals a black and white contrasted photograph that exemplifies the destructive and dismissive attitudes taken by the contemporary American culture toward nature.

With a black and white photo there is a lot of room to exemplify different aspects of a picture.

Don’t waste time
Get a verified writer to help you with The Monster Snaps His Jaws by Laughlin: The Attitudes of Contemporary American Culture Towards Nature
Hire writer
$35.80 for a 2-page paper

In this particular picture the black and white image helps with direct focus on the "screaming tree stump,” you can clearly see at the top of the stump what looks to be a mouth screaming. The first thing I noticed was the detail in the tree and the focus on the tree with a semi blurred background. My focus then moved behind the tree where I noticed a house, just off to the side of the tree in the far back.

The style of the house and where it is doesn't match the huge tree stump but the tree was obviously there before the house, but unfortunately was partially removed. With black and white coloring, it helps to make the details and shadows appear more weathered and noticeable to a viewer's eye, but there was very limited picture editing available in the 1950s compared to editing in modern day society now.

The photograph was also dated 1956 so that also adds to the styles that were available during that time. That shows that the tree had so much natural detail the film even showed it all, almost as if the picture expressed a story of the trees life. With the black and white contrasting, you can tell there was limited clouds when the photo was shot which leads to very little shadowing of the tree and its surroundings. This also allows for such clarity of the image that it allows one to see every little detail going on in the photo. Another technique the photographer used with the layout was a small black border to add even more depth of field to the image. This keeps the subject at hand in the point of view and helps make the image even more professionally. Additionally, the photographer went with a glossy printed image, which adds to the clarity of the image. A matte photo wouldn't show all the detail in the tree stump that is clearly exposed with the glossy image.

As a society, we tend to unnecessarily torture nature in our path. It is definitely noticeable that the tree could have been through some pain. With a ten-foot stump still towering over the smaller brush and flowers around the base. The screaming tree stands tall. Huge bases of what use to be branches reach out and end where the saw cut them apart and left them to dry up. But one feature of the tree really sticks out, the fact that there are five to seven huge two by four pieces of wood nailed to the tree in random order. When I first looked at the wood I noticed that every piece looked different. Some were newer than others and then there were those so weathered they looked as if the had been there longer then the tree. As the years went on it could be possible that someone added wood each year to keep track of how old the tree was. That's the only thing I could think of that would explain the different wear and tear of the wood. Ironically, the tree was cut down for who knows what, maybe for fire wood or lumber or to build the house in the background. However, you see pieces of wood then nailed to the dead tree as if it is mocking the fact that the tree was cut down and left there in the middle of a field with nothing surrounding it but weeds and a small house. The point of view of the photographer also makes the tree stump look like it's the biggest thing in the picture to add that touch of power over the distractions in the foreground. For all we know the stump could have been five feet tall but through the lens and angle it made it look ten or twelve feet tall.

The irony of wooden house in the background and partially murdered tree can easily lead to opinions on what has happened. There is also no clear evidence that the tree was already deceased. If that's the case, the screaming tree may not have been screaming but maybe rejoicing to be removed from civilization and possibly used to create something better. There's nothing that can tell us what has actually happened to the tree except for the fact that it had been cut down. By taking surroundings and focal points of the picture into perspective, it comes to mind that the tree was used for some sort of production of the house in the background because there is nothing else that would triggered the disturbance of the tree. By the size of the stump, this tree was hundreds of years old and it was needed for something else. The image doesn't have any other trees in sight, which doesn't make sense as why they would take the one tree in the area. That's why this picture is so deep in the sense of what is shown. There is nothing shown that proves to why the tree needed to be screaming in the first place yet that's all the picture shows us. Laughlin did an amazing job at photographing the image but the title is quite deceiving.

Throughout the use of many different photography styles, Laughlin exposes the struggle of how nature is affected over time by different humans. In addition to the colors and how they affect the image, we see a very specific angle that makes sure the viewers focus directly on the tree that's screaming out for help. The longer you spend looking at the tree, the more you realize what else is going on in the image and how beautifully the image is composed.

The Monster Snaps His Jaws by Laughlin: The Attitudes of Contemporary American Culture Towards Nature. (2021, Oct 31). Retrieved from http://envrexperts.com/free-essays/essay-about-monster-snaps-his-jaws-laughlin-attitudes-contemporary-american-culture-towards-nature 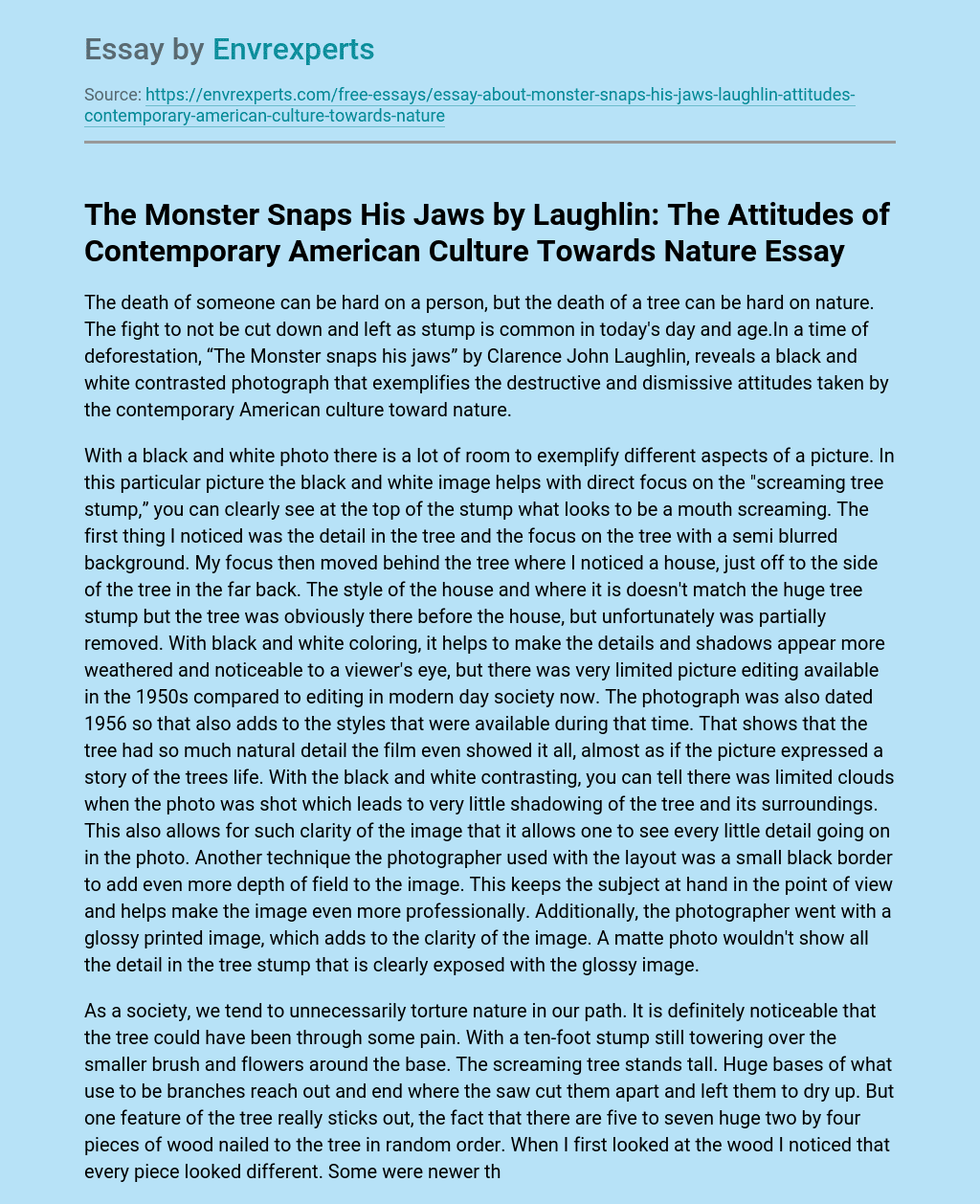