In order to understand why the NRDC’s campaign against whaling was conceived in the first place, it is important to explain the history of whaling, why it is illegal, and what policies have been made regarding the subject.

Whaling is defined as the practice of hunting and slaughtering whales for meat, oil, and bones to trade and sell. This was a very competitive business among pro-whaling countries because whale products can be used to create margarin, candles, transmission fuels, etc.

Don’t waste time
Get a verified writer to help you with National Resource Defense Council
Hire writer
$35.80 for a 2-page paper

(Whaling). According to the NRDC, the cost of taking a whale’s life has greater negative consequences than the economic benefit in which the whaling industries receive. NRDC’s motivation for saving whales comes out of sympathy and appreciation for these “magnificent” mammals. “They inspired the 'Save the Whales' movement, which fundamentally is about the struggle between short-term human greed and the diversity and richness of life for generations to come” says Joel Reynolds in an NRDC article about the why whales matter (Save the Whales, Save Ourselves: Why Whales Matter).

Seeing the rate at which these creatures were being slaughtered will provide understanding as to why whaling is such an urgent and pressing issue for NRDC and others.

Within the last century, astonishing numbers of whales have been killed for the previously mentioned subpar reasons. Although the whaling industry has been around for thousands of years, whale hunting within the 20th century caused the most harm to the mammals. Between 1990-1999 researchers estimated that 2.

9 million whales were killed across all of the oceans by the whaling industry. Within the last century, 90% of the blue whale species was lost, along with one-third of all sperm whales. While some whale breeds have recovered, many are still reaching extinction, such as the North Atlantic right whale and the Antarctic blue whale (Cressy 141).

International Convention for the Regulation of Whaling

After the extreme decline in whales throughout the 20th century, activists were ready to make a stand and end the slaughtering. The movement began in 1946 by the International Convention for the Regulation of Whaling (ICRW) which is an international environmental agreement signed in Washington D.C. The ICRW was designed to better protect specific species of whales from the whaling industry. While it was a promising agreement, it wasn’t productive enough in stopping the endangerment of whales through whaling. The most recent, and most beneficial agreement was made in 1986 by the International Whaling Commission (IWC). The IWC’s prevented whale hunting completely through creating a series of policies that would describe exactly what kind of contact people could have with whales. Many countries agreed to these policies at first, but over time specific countries have not followed through in complying with this agreement and have continued to hunt whales (History of Whaling). In modern times, where campaigns such as the NRDC’s, to end commercial whaling are needed in order to continue the protection of these important creatures.

The NRDC organization focuses on many environmental issues among them one which caught our attention was the environmental movement campaign to end commercial whaling. This campaign is led by Taryn Kiekow Heimer she is the NRDC deputy director of the Marine Mammal Protection Project and Nature Program. She has great history that makes her a great leader for this campaign; she worked as a litigation associate at a private law firm and at SeaWorld as a dolphin trainer.

The whaling campaign to end commercial whaling was launched in despite to international laws that were set to end commercial whaling and countries like Iceland, Japan, and Norway that are still killing whales for profit. Iceland and Japan are the two countries that are killing them illegally. This NRDC campaign pushes diplomatic sanctions and international rulings to stop Iceland and Japan (2018). The US is a major proponent that this campaign has used as their diplomatic sanction to create embassies for this issue. Along to the international ruling; the campaign has used the outlawing whale hunts that was issued in 1986 to avoid the extinction of whales. The campaign is sustained by these two important factors. NRDC whaling campaign has proved to tackle this environmental issue with very impressive rhetoric and diligence.

The campaign is non-violent and patient with their work. They have fixated their success on petitions that have helped impose sanctions that impose our international laws which have also been held as well as supported by other environmental groups. Another form of success for the campaign has been to send letters to the White House regarding these issues. The proofs obtained by the campaign are both intrinsic and extrinsic. The intrinsic evidence is based off the campaign's legitimacy, logical appeals, and audience persuasion (Expert Blog). During the Obama presidency, the NRDC had his support and leadership to help fight commercial whaling. The NRDC accomplished this by promoting their news and argument on MSNBC which was the news channel president Obama watched at that time. He then went off to comment along the lines that he did not like being called a whale killer. The extrinsic evidence consists of the sources and facts within Iceland and Japans “needs” for commercial whaling (2016). Such extrinsic proof like has been used to put these petitions into action.

Since 2008 the International Whaling Commision known as IWC was in junction with indigenous people to gain substantial quotas that relied on their hunting needs. Until recently the IWC decided to try and work out a compromise that would both legalize commercial whaling and the quota process.

The NRDC gains legitimacy in many ways, but one of the most important ways of gaining legitimacy is through their extremely large membership involvement. The organization gains a large amount of membership support by using strong polarization tactics. The save the whales campaign identifies through expressing their values and beliefs as if the audience shares them. This makes the audience feel unified if they do share the same values as NRDC on this particular issue of whaling. Through polarization, they unite themselves with the audience and they form an ally that is against certain things, in this case, Iceland's government and whaling practices.

During a press release about the campaign, the NRDC claims that “Iceland is one of only three nations that continue to engage in commercial whaling and international trade in whale products, in defiance of international law” and goes on to name the significant numbers of whales killed by this industry. This statements pressures anyone who believes in the fulfilment of the law and the protection of whales to be polarized against Icelandic whalers. A second example comes within the same press release by Regina Asmutis-Silvia, executive director of Whale and Dolphin Conservation North America. She says, “Commercial whaling is cruel, unprofitable, harms the environment, and is no more sustainable than deforestation in the Amazon.' (Icelandic Whaling Continues to Make Waves at Boston Seafood Expo). This statement reaches not only people interested in the fulfilment of law or simply whales, but the environmentalist community as a whole. Through these acts of polarization, the NRDC’s campaign attempts to sway law-abiding citizens, people concerned about whales, and people concerned about the environment as a whole against Icelandic whalers and lets them achieve a status of legitimacy.

The NRDC’s political standing gives them a great advantage when fighting against whalers. Because the organization is made up of many successful lawyers and has strong political ties, they are able to reach not only the individual people concerned about whales, but the government as well. Their whaling campaigns were at their peak during the Obama administration and they communicated with him on multiple occasions about the issue. For example, NRDC along with the help of other environmental organizations called upon the Obama Administration with pressure to “impose targeted economic sanction against Iceland.” At this time, Iceland had been violating international laws by continuing their plan to hunt 184 fin whales, which are endangered. Taryn Kiekow Heimer explained how Obama was afraid of being seen as a “whale killer,” which led him to authorize diplomatic sanctions against Iceland in 2011, saying, “Iceland's actions threaten the conservation status of an endangered species and undermine multilateral efforts to ensure greater worldwide protection for whales.” While NRDC was hoping for more “hard-hitting” sanctions, they still gained a fair amount of governmental support because of their political standing. (“Iceland to Hunt Fin Whales Again. . .”). 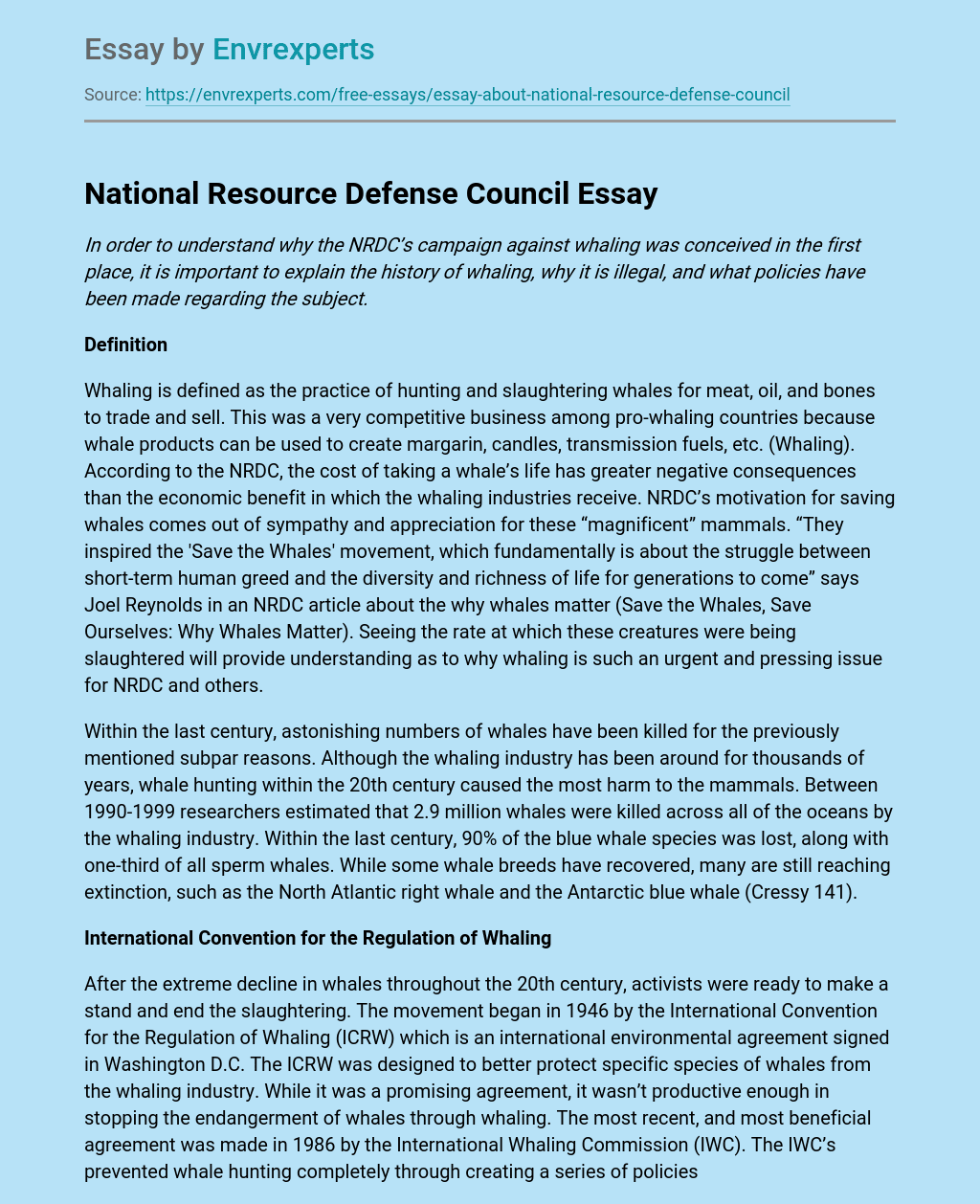