Don’t waste time
Get a verified writer to help you with Natural Disasters: Climate Change and Greenhouse Effect
Hire writer
$35.80 for a 2-page paper

In the late 1988 The Intergovernmental Panel on Climate Change, after a variety of factors had pushed the greenhouse effect into the spotlight (Revkin, 2018). Climate Change pertain to significant, long-term changes in the Global climate ( Global climate is the connected system of sun, earth, oceans, wind, rain, snow, forests, deserts, savannas and everything that people do).

But the average of the climates of specific places is less than the global climates (warmheartworldwide.org, N.D). The climate of the Earth changed throughout history. Most of these changes are ascribing to very tiny variations in the orbit of the earth that changed the amount of solar energy our planet take or receive (California Institute of Technology, N.D).  Climate Change is referred also as a Global Warming, refers to the rise in average surface temperatures of Earth (Participant Media, N.

D).\n In that year also which is the year 1988, there was a long period of time that have no rain and then the heat in the United States and vast fires in the Amazon rain forest and in Yellowstone National Park.

The outline of a solution had been made or form just one year earlier as the world’s nation concur on the Montreal Protocol, which is to remove synthetic compounds that put the atmosphere’s protective ozone layer into danger. In the senate testimony on June 23, James E. Hansen a climate scientist who studies the condition on Venus to Earth’s human changed atmosphere. He concluded that “the greenhouse effect has been detected and is changing our climate now” (Revkin, 2018). \n In 1988 a variety of factor including severe drought and heat and vast fires in parts of the world had pushed the greenhouse effect into the spotlight (Revkin, 2018). A greenhouse gas is a gas that can received infrared radiation in the atmosphere. As these gases take in infrared radiation, the lack heat within the troposphere, the lowest layer of the atmosphere. In resulted, this will increase surface temperatures; this is also known as the greenhouse effect. Greenhouse gases include; carbon dioxide, chlorofluorocarbons, hydro chlorofluorocarbons, hydro fluorocarbons, methane, nitrous oxide, ozone, per fluorocarbons, sulfur hexafluoride, and lastly the water vapor (Cousineau, N.D).

The greenhouse effect is a natural process that warms the Earth’s surface. When the sun’s energy reaches the earth’s atmosphere, some of it is reflected back to space and the rest is received and re-radiated by greenhouse gases. The human activities like burning fossil fuels (coal, oil, and natural gas), agriculture and land clearing help to increase the concentrations of greenhouse gases. This is the enhanced greenhouse effect, which is contributed to warming of the earth (Terrace, N.D). The greenhouse effect is a warming of the earth’s surface and lower atmosphere cause by substances such as carbon dioxide and water vapor which let the sun’s energy through to the ground but impede the passage of energy from the earth back into space (NIWA, 2016).

Glen Peters, a scientist at the Center for International Climate Research in Oslo, Norway, charted the rise of carbon dioxide level in the atmosphere from the year 1870 and found out that half that rise has come from the human activities in past 30 years. Research by an array of scientists and scholar support the daunting conclusion: Climate change is unlike any environmental problem we’ve faced. We can’t fix it the way we’ve started to fix smog or the ozone hole. Earth emerges only when the greenhouse emission surge is considered alongside other metrics for human activity. Pollution and climate impacts, then, are symptoms of a broader situation: the human-earth mush up moment called Anthropocene (Revkin, 2018).  The atmospheric concentration of greenhouse gases such as carbon dioxide, methane and nitrous oxide has a significantly increased since the beginning of the industrial revolution. This is mainly due to human activities, such as burning of fossil fuels, land use change, and agricultural. It is very likely that overall human activity since 1750 have had a global warming effect on the earth (European Environment Agency, 2019). Climate change is due to the human activities like burning fossil fuels that help destroy the ozone layer. 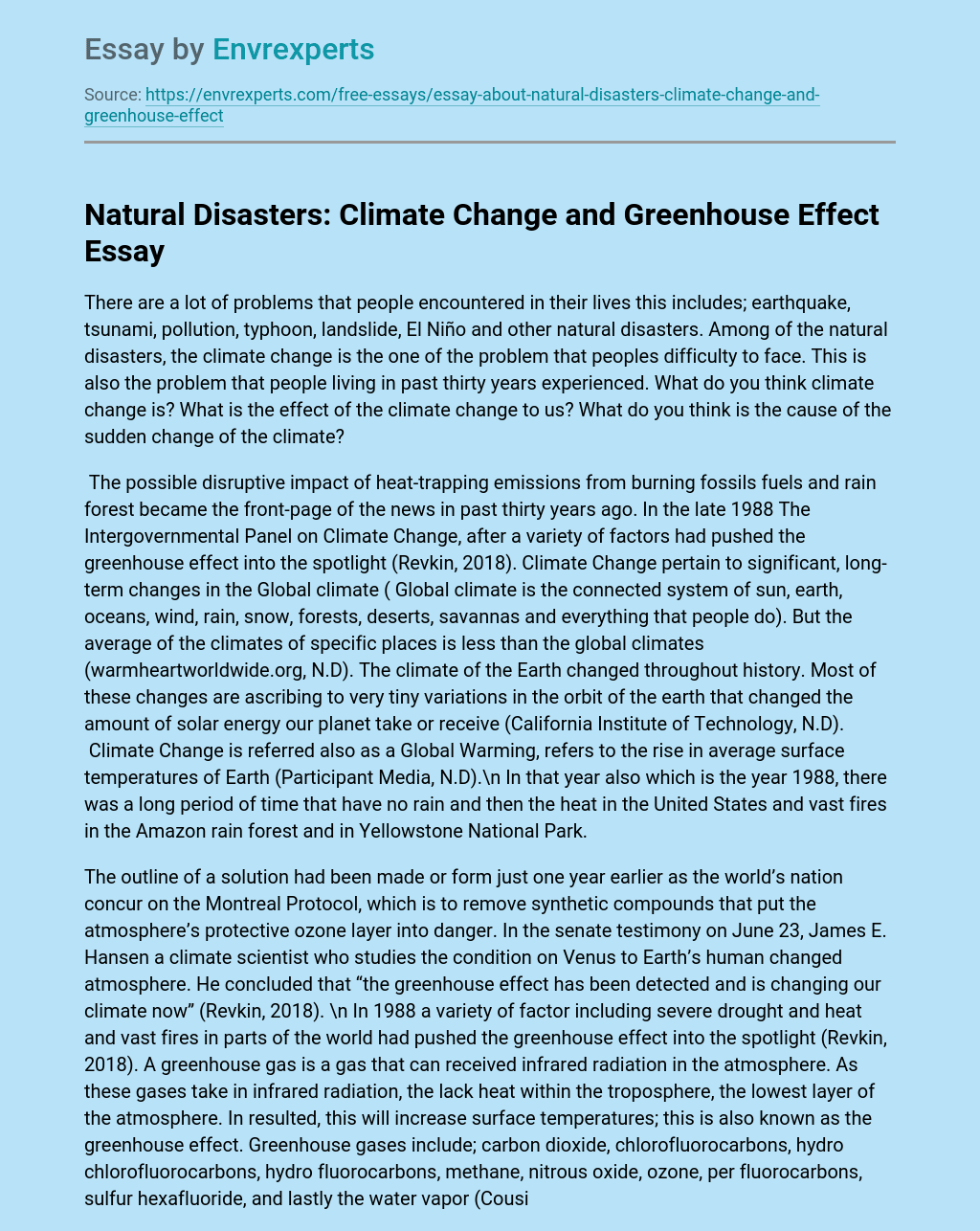