Air pollution is made up of various kinds of gases, and particles that reduce the quality of the air. Plants and animals and their habitats can also be harmed by air pollution. Air pollution has thinned the protective ozone layer above Earth. It can damage buildings, monuments, statues, and other structures. Air pollution can also result in haze, which reduces visibility and can sometimes interfere with aviation.

The most abundant of air pollutants are Carbon Monoxide, Nitrogen Oxides and Sulfur Oxides.

Don’t waste time
Get a verified writer to help you with Negative Effects of Air Pollutants
Hire writer
$35.80 for a 2-page paper

These chemicals are the waste byproducts of fuels that are used in transportation, industrial processes and general combustion. Contrary to the beliefs of many people, air pollution does not only occur in urban regions but also within the countryside. Within the city construction, factory exhaust and automobiles are the causes of air pollution. Whereas in the country air pollution is created by also by automobiles but also from rock quarries, dirt and gravel roads, and the smoke from the burning of crops and wood fires.

A major part of the air pollution within a city is ground-level ozone. Ground level ozone is formed when fuel and engine gasses that are already released into the air react with the sunlight when they come into contact, with each other. During the hotter summer months when the air is still and the surrounding temperature is warmer due to the bright sun the ozone levels increase. This ground level ozone is very different to the ozone layer in the Earth's atmosphere that protects the planet form the harmful radiation that is given off the sun.

The History of Air Pollution

Air pollution is not a new problem. In fact it has been a problem since 900 BC when Hit, a town located West of Babylon, was the center of asphalt mining. King Tukulti, an Egyptian king, visited the town and reported a strange smell in the air generated by the ulmeta rocks. These rocks are high in sulfur dioxide and hydrogen sulfide.

Centuries later in 1157, Eleanor, Henry II's wife, left her home in Nottingham, England because the pollution caused by burning wood was "unbearable." In the 1300s England began to use coal instead of wood for heat, causing major air pollution problems. To clean up London's air, King Edward I, outlawed coal burning exclaiming, "…whosoever shall be found guilty of burning coal shall suffer the loss of his head." The problems of poor urban air quality even as early as the end of the 16th century has also been well documented. But air pollution of the past has mainly been from industrial processes and or the burning of fuels.

Emissions That Contribute Towards Air Pollution

Globally, the quantities of nitrogen oxides that are produced naturally (by bacterial and volcanic action and lightning) far outweigh man-made emissions. Man-made emissions are mainly due to fossil fuel combustion from both stationary sources, for example power generation (24%), and mobile sources, such as transportation vehicles (49%). Other atmospheric contributions come from noncombustion processes, for example nitric acid manufacture, welding processes and the use of explosives.

When fuel is burnt efficiently, the major byproducts from this are carbon dioxide and water. Carbon monoxide is commonly emitted from idling and slow-moving road vehicles, such as during traffic. Up to three-quarters of all carbon monoxide emissions are from road transportation. Smaller amounts of contributions come from various processes that involve the combustion of organic matter, for example in power stations and waste incineration.

Particulate matter; meaning matter that is minute in size, is emitted from a wide variety of sources, the most significant primary sources are road transport (25%), non-combustion processes (24%), industrial combustion plants and processes (17%), commercial and residential combustion (16%) and public power generation (15%). Natural Sources are less noted; these are from volcanoes, lightning and dust storms. Particulate matter can also be formed by the transformation of gaseous emissions such as oxides of sulphur and nitrogen, and VOC's

The main emission sources are from motor vehicles such as cars and buses; major and minor industries; and off-road motor vehicles such as construction equipment, boats, and planes. Motor vehicle emission control devices have dramatically reduced pollutant emissions per vehicle during the past 20 years. But the numbers of cars and trucks on the road, and the number of miles they are driven, have doubled over the years. Vehicles are now driven more than a trillion miles each year in the US alone.

Motor vehicles, such as cars, generate three major pollutants: hydrocarbons, nitrogen oxides, and carbon monoxide. Hydrocarbons react with nitrogen oxides in the presence of sunlight to form ground-level ozone (smog). Nitrogen oxides contribute to the formation of acid rain, although sulfur dioxide is the main contributor. Acid rain increases the level of pollutants in lakes, rivers, bays, and other waterways. Carbon monoxide is capable of impairing mental functions and visual awareness and is deadly in high concentrations. Motor vehicles also emit large quantities of carbon dioxide, which has the potential to trap Earth's heat creating a green house effect and contributing to global warming.

According to the Environmental Protection Agency, two-thirds of carbon monoxide emissions and nearly half the ozone-forming emissions come from mobile sources, such as cars. Typically, the older the car, the more pollution it emits. The EPA has found that 30 percent of five-year-old cars emit much more than they were designed to emit, contributing to air pollution more than the other 70 percent of vehicles of a similar age. Fifty-five percent of seven-year-old cars are "gross emitters" meaning that they produce more pollutants than they were designed to. Overall, 10 to 30 percent of the vehicles on the road create the majority of the pollution from cars and trucks.

Who is Keeping Track of the Air Pollution?

The Environmental Protection Agency (EPA) checks and reports on air quality in the United States. The EPA, in cooperation with local air-quality boards, measures the level of pollution in the air over many large cities and a number of rural areas. Because of the Agency's efforts, the country's air quality has greatly improved over the last 20 years.

Newspapers, television and radio stations often give air-quality reports in areas where pollution is a problem such as in New York City. The Air Quality Index (AQI) is a scale of air quality that ranges from 0 to 500 and is used in many weather reports. An AQI score of over 100 indicates unhealthy air conditions.

The Clean Air Act (CAA) as created in 1970 launched an aggressive national campaign to maintain healthy air quality by controlling air pollution. The 1990 improvements to the CAA renewed and fortified national efforts to reduce the air pollution within the United States. These amendments presented a massive challenge for regulatory officials, regulating industries, and others involved in this environmental control undertaking. The primary purposes of the actions mandated by the CAA were to improve public health, preserve property, and benefit the environment.

Such chemical pollutants have also been responsible for affecting the reproductive organs of fish, alligators and polar bears, preventing them from reproducing. Chemical pollution in the environment also affects humans – 46 US states have issued warnings against eating local fish because of dioxin contamination. Species living in water are often the most strongly affected due to the fact that water easily spreads pollution as opposed to land, and because people often dump their pollution into water. Global warming will also affect every species on Earth to some extent, and although some species will thrive, many will not.

The Effects of Air Pollution Upon Human Health

Air pollution can affect our health in many ways with both short-term and long-term effects. Different groups of individuals are affected by air pollution in different ways. Some individuals are much more sensitive to pollutants than are others. Young children and elderly people often suffer more from the effects of air pollution. People with health problems such as asthma, heart and lung disease may also suffer more when the air is polluted. The extent of which an individual is effected by air pollution usually depends on the exposure to the damaging chemicals; the length of exposure and the concentration of the chemicals must also be taken into account.

Short-term effects include irritation to the eyes, nose and throat, and upper respiratory infections such as bronchitis and pneumonia. Other symptoms can include headaches, nausea, and allergic reactions. Short-term air pollution can aggravate the medical conditions of individuals with asthma and emphysema. Fortunately for most healthy people, the symptoms of air pollution exposure usually go away as soon as the air quality improves.

Long-term health effects can include chronic respiratory disease, lung cancer, heart disease, and even damage to the brain, nerves, liver, or kidneys. With continuous exposure to air pollution affects the lungs of growing children and may aggravate or complicate medical conditions in the elderly. It is estimated that half a million people die prematurely every year in the United States as a result of smoking cigarettes.

The Future of Air Pollution

As the Earth's population increases and industrialization booms in currently underdeveloped nations, air pollution will be a problem for several more decades. But the problem of air pollution should be much less of a problem in a couple of centuries from now. At that time, fuel sources that emit harmful air pollutants will be basically eliminated entirely. This assumes that human innovation and progress toward solving environmental problems continues, such as the fuel efficient and electric cars. But this has not taken into account that the population of automobiles is constantly increasing at an astonishing rate. 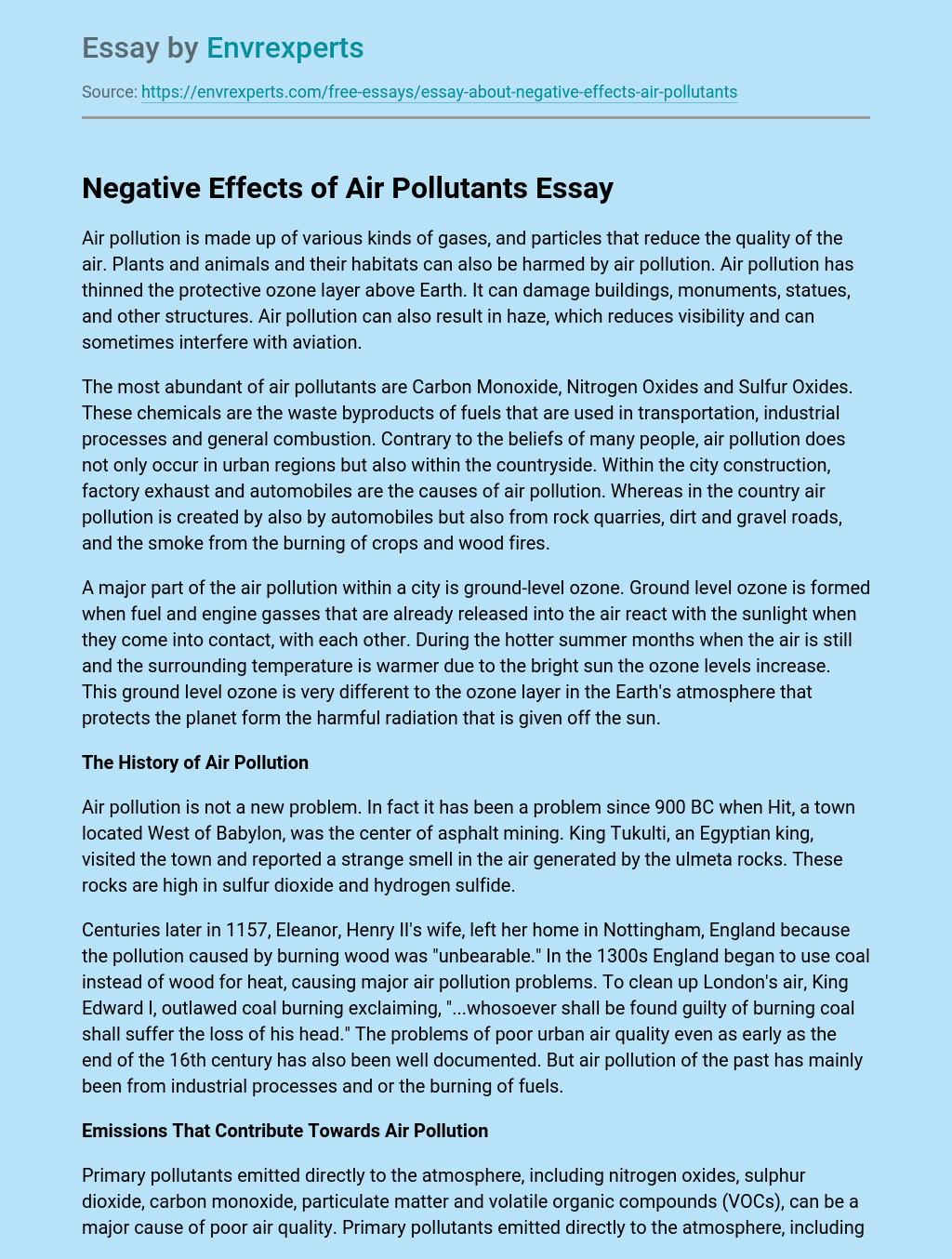