The Negative Effects of Global Warming Caused by the Human Factor

Global warming is a problem that affects all living beings on the planet earth. Many species and plants are also affected like humans and they have to adapt to drastic changes that happen on earth. These may be natural phenomena that cause a big destruction and damage. Also, many diseases are caused and can affect the health of humans and animals. When major disasters occur, the Government has to face and repair the damage, knowing the time is very expensive.

Don’t waste time
Get a verified writer to help you with The Negative Effects of Global Warming Caused by the Human Factor
Hire writer
$35.80 for a 2-page paper

Modernity is severely damaging the climate, and accelerating the warm temperatures of the planet.

Global warming was and remains a big issue for our planet, which affects all living beings on earth, including animals, plants and humans. The variety of disasters that destroy nature, have been caused by accelerated warming of the earth. Even diseases have been increasing for the same of world climate and the chances of finding abundant food have been decreasing. For society the government has sufficient authority and power to find a solution to this problem that affects us all.

To get started, eliminating the new technology which exist in the whole world, followed by, reducing the use of gasoline for cars, especially for the large trucks and trailers, lastly, to avoid the continuous growth of the largest cities who compete with each other continuously. All this global warming has been caused by the hand of the man, which is now almost impossible to stop this problem.

One of the major challenges facing humankind is to provide an equitable standard of living for this and future generations: adequate food, water and energy, safe shelter and a healthy environment, unfortunately this is not real and pure (Watson).

Also, this does not always includes just humans but the government system too. This is also a fight of the government, the Global warming may also unravel political and social stability posing a challenge for global security of the world, according to the authors (Magnitude). In addition, to all of this, the science has been conclusive: both man-made and natural factors contribute to climate change. Also, the Earth's rapidly warming temperatures over the past several decades cannot be explained by natural processes alone (Gordon 1).

Global warming is affecting all life in the planet. This includes plants and entire forests, land and marine animals and of course humans. The warming affects plants and trees, and little short of water a lively forest can burn with a minimum spark of fire and completely destroy itself. For the consequences of environmental change, trees have been declining over the years to the point of not being able to purify and protect the planet properly (Corvalan). Also, many terrestrial and marine species are in danger of extinction thanks to the cause global warming. Many land animals are unable to reproduce themselves, the number of their species decrease till they would no be more any longer. Especially marine animals, are most affected by climate changes and sudden constant for example, young fish, shrimp, crabs, frogs and salamanders and just to mention some, begin to disappear (The Impacts 1). Some animals cannot find their main meal, so they start to look for another kind of food in order to survive, others unfortunately die because they are unable to find something to eat. Humans, on the contrary, the problem is not only the reproduction, is the large population of people in the world. Human warmth can also be the cause of climate change. Furthermore, activities manmade, are the first that have caused and worsened global warming (Humanity Activity 1). For the first many scientific advances that will be most affected by climate change will make the poor not having enough resources to withstand the severe changes (Global Warming). This is a problem that affects us all in general, which many people do not want to account for the risk they run our new forests, other species, and our next generations.

Global warming caused large differences in human life, increasing its strength with natural phenomena that cause damage and has been smashed around the world. Those great catastrophes which often happen at any time, for example, tornadoes, hurricanes, earthquakes, tsunamis, floods, volcanic eruptions, severe thunderstorms, etc. Natural catastrophes are becoming more common and more expensive. Many people have witnessed a dramatic increase in the economic cost and human impact from hurricanes, earthquakes, floods, and other natural disasters worldwide. Economic losses from these catastrophic events increased from $528 billion (1981-1990) to more than $1.2 trillion over the period 2001-2010 (Kunreuther 1). It is more than certain that global warming causes these natural phenomena that once have cost too much money to the government to repair.

Therefore, environmental warming has led to new diseases that are lethal to humans, and unfortunately there are still no cures for some of the diseases. These may be no longer new but still deadly diseases for mankind. According to scientists and researchers a lot of ultraviolet B rays reach the earth and causing cancer and cataracts in the skin, and may even do a huge harm on human beings and animals (The Impacts). But are not the only diseases caused by rapid climate warming. There are also other new diseases such as the mosquito bite, which transmits the virus when making contact with blood, and has claimed the lives of many in recent times (Fish 3). Nowadays, it is terrible to know that a disease caused by global warming can kill us at any time.

The government needs to pay more attention and commitment to global warming, while trying to stop the excessive use of gasoline in cars and the technological augmentations electronic devices. Best of all, the government has the authority to do something about it and to protect its people. First to seek a solution to gasoline to prevent further contamination of the entire planet and global warming. Transportation is the first responsible for the climate change, and high temperature (Gordon 1). Each year, the temperature rises and the summers are getting even warmest. This also can be caused by new roads that had been built in the course of the years. But above all that, what else is speeding warming the electronic devices that are around the world. However, most lending companies do not mind that, they just think about making money and to compete with other companies. Someone has to take the first step to make a stop of what they would later call a great slaughter, and for many is only one who has the power, and that is the government.

In conclusion, all the global warming is has been caused by humans, and we are hurting the planet and all that lives within it. We are also unintentionally causing new diseases that are deadly for ourselves and for the species. In addition, we are causing massive disasters of natural phenomena, which are accelerated by the same activities of construction and technology. We are self-destructing ourselves and we do not want to put a stop to all this.

The Negative Effects of Global Warming Caused by the Human Factor. (2021, Oct 31). Retrieved from http://envrexperts.com/free-essays/essay-about-negative-effects-global-warming-caused-human-factor 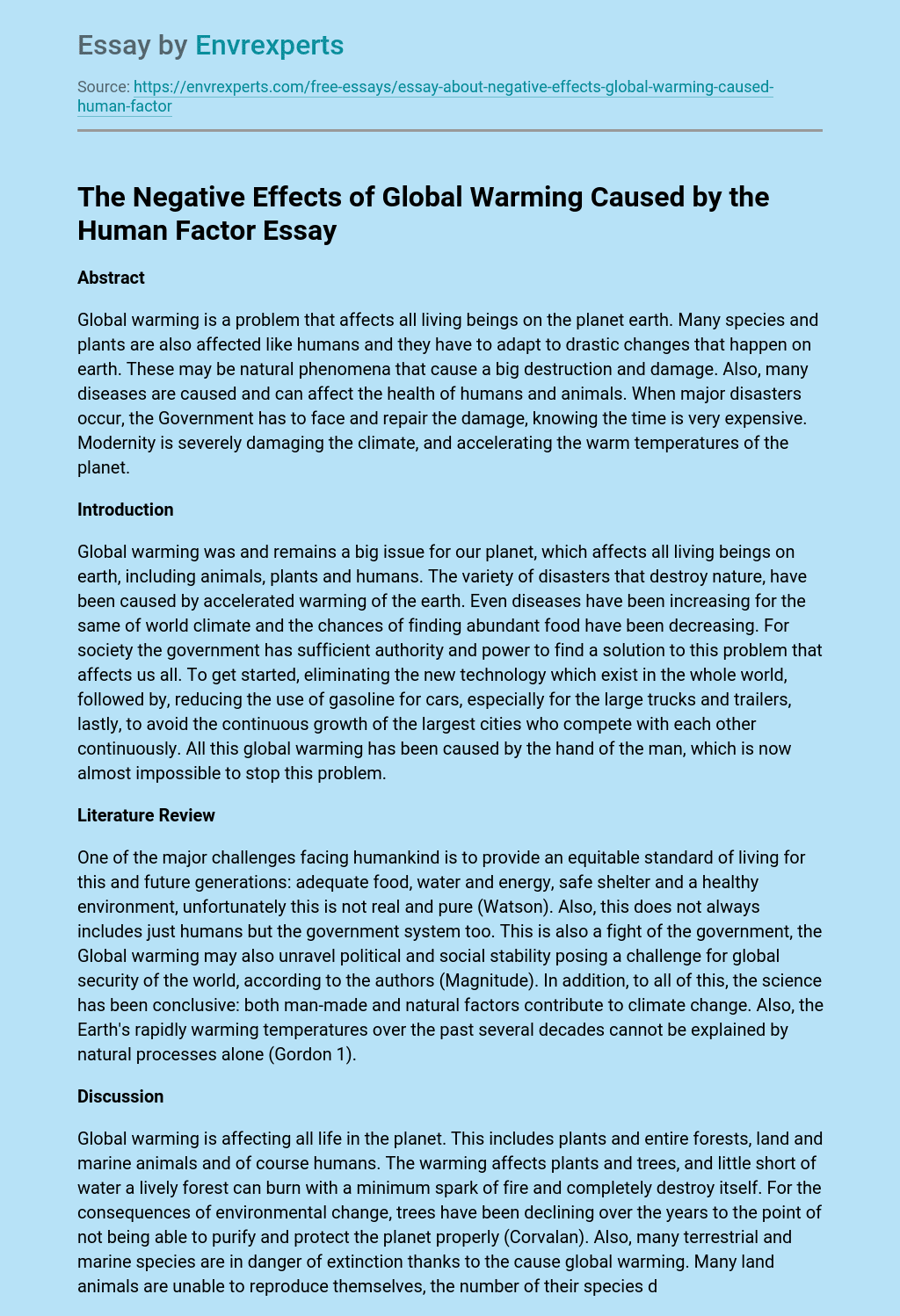