Ocean Pollution and the Effects of It

If humans do not take better care of the oceans, then life may slowly die out. As we head into a new millennium, we may be slowly killing off our species and many others without even realizing it. There are some solutions that we have put into effect, but without others they will help minimally. To fully understand about what needs to be done in the future, one must first understand four things. First, one must comprehend general knowledge of the ocean and the effect of it on the earth s ecosystem.

Don’t waste time
Get a verified writer to help you with Ocean Pollution and the Effects of It
Hire writer
$35.80 for a 2-page paper

Secondly, the background of ocean pollution must be known. Next, the effects of ocean pollution need to be recognized. Finally, one must find out what is being done currently in reduction, to determine what still needs to be done. If we act upon new solutions, then we may be able to fully stop deterioration. Stopping the deterioration is the first step towards healing our oceans.

The first bacteria life developed in the depths of the ocean approximately three billion years ago. During the time that has passed, it has done many crucial things. For one, the life has evolved into more complex organisms. The organisms of today are very diverse. They can live almost anywhere, eat a variety of things and have developed characteristics unique to each species.

Even though some of the organisms of today do not live in the ocean, all of them depend upon it, especially humans.

To begin with, the oceans keep the earth s temperature reasonable by storing and transporting heat from the sun. Secondly, it is a great source of minerals. Third, it is the source of sixty-million tons of food for humans alone each year and a source for power. The oceans have also become livelihoods for many. Next, they have produced many helpful materials. These include things such as bone graft material from corals and anti-leukemia drugs from sea sponges. Finally, the ocean is the home to the largest source of oxygen on the earth. The oxygen is a by-product of trillions of phyto plankton that dwell in the ocean. With only the oxygen from the land sources, life would slowly be choked off. All of these factors are part of the ocean s intricate ecosystem. If the ocean s ecosystem is thrown out of balance, then it also affects the earth s. If the earth s ecosystem is out of balance, then all living things may die. This is why it s important for all organisms to work together and take care of the ocean. (Canby, 1994; Sadler, 1996; Talen, 1994)

Ocean pollution has existed since the beginning of life, but over time it has changed. At first, ocean pollution was natural and could be taken care of by the organisms living near it. Over time as living systems began to develop, they began to produce more unnatural and natural wastes. Over the past one hundred years, there has been a great increase due to the industrial and technological revolutions. The unnatural wastes were made as by-products of the combination of natural substances. The majority of the wastes are foreign and not able to be processed by the ecosystem of the ocean. (Talen, 1994; Gold, 1994)

There are an assortment of harmful wastes that have been created. They can be classified into four main groups. The first is the by-products of manufactured goods. These are the most common and possibly the most harmful. They are most harmful because of their mass amounts. They often have very little of the harmful substance in the by-product, but there is so much of the byproduct that it becomes a threat. Also, many times the by-products take at least hundreds of years to decompose. During the decomposing of the by products there are more being added to the water and cannot be decomposed of fast enough. The second type of waste is composed of used items that are no longer needed. They are out of place to the ocean, because the ecosystem rejects them. Many contain things that are harmful to the ocean life and they slowly kill it. The third group consists of helpful items buried into the earth. These include from pesticides to fertilizers. In the ocean, they become very destructive poisons. The fourth and final category is natural waste. Over time the population has grown and so has the waste. It takes up more room now and the decomposers cannot keep up with the increasing amount of wastes. (Annin, 1999; Caldicott, 1995; Dolan, 1997; Ehrlich, 1996; Gold, 1994; Jongens, 1999; Gorman, 1994; Rosenblatt, 1999; Sadler, 1996; Talen, 1994)

Even though not all of these wastes were purposely dumped in the oceans, they have all traveled to it. There have been many ways to dispose of wastes, but non thus far are successful. First, the wastes were purposely dumped in the ocean or another body of water that flows into it. That was one of the only ways for over a thousand years. Recently, there have been laws passed to minimize the dumping, but many companies still dump illegal amounts. Another way is when things are accidentally lost in the water. This includes things from ship wrecks, planes that went down and garbage from barges on their way to off-shore land fills. Also, some wastes in the water are a result of runoff from fields. These fields may contain fertilizers or other such materials that are harmful to the ocean. A different way to get rid of the unwanted wastes is to bury them or send them to land fills on small islands. This still doesn t help the oceans, because the waste travels through the ground water to nearby lakes or streams. These led to rivers and eventually to the ocean. It ends up with the same result as if it were dumped directly into the oceans. Finally, the litter on beaches and areas close to water is blown into the water by storms or a strong wind. All of these ways are currently being used to try and rid the earth of pollution. Even though these pollutants are thought to be disposed of when they are in the ocean and not seen, they usually come back to haunt the world through their results. (Annin, 1999; Dolan, 1997; Gorman, 1994; Millichap, 1995; O Neill, 1994; Talen, 1994)

The results of ocean pollution are diverse and extremely harmful to all organisms. They effect the organisms in three main ways. The first way is that organisms become sick. This includes serious diseases, cancer, and infections. It can also include less severe things such as headaches, rashes, burns, and nausea. The second effect is the reproduction of the organisms. Many times poisoned organisms babies are born with defects and could die from them. The third way is that the organisms that the organisms die. There are many reasons why organisms die. For one, they may starve, choke or be unable to escape a predator. Also, as the amount of poison increases as it moves up in the food chain, so when it reaches a certain point it become deadly. These are just a few of the many ways organisms die. What is being done is not preventing this enough. (Andryszewski, 1995; Annin, 1999; Beder, 1998; Dolan, 1997; Kerr, 1994; Sadler, 1996; Tyson, 1995; Wekesser, 1994)

There has been very few things done to help the oceans in comparison to how severely they have been harmed. The most reliable source for the ocean is it its ecosystem. It has been there for billions of years and can absorb, process, and recycle a certain amount of natural wastes. After that it relies mainly on humans. Only within the past few hundred years have people started to help the ocean.

Ocean Pollution and the Effects of It. (2021, Oct 31). Retrieved from http://envrexperts.com/free-essays/essay-about-ocean-pollution-and-effects-it 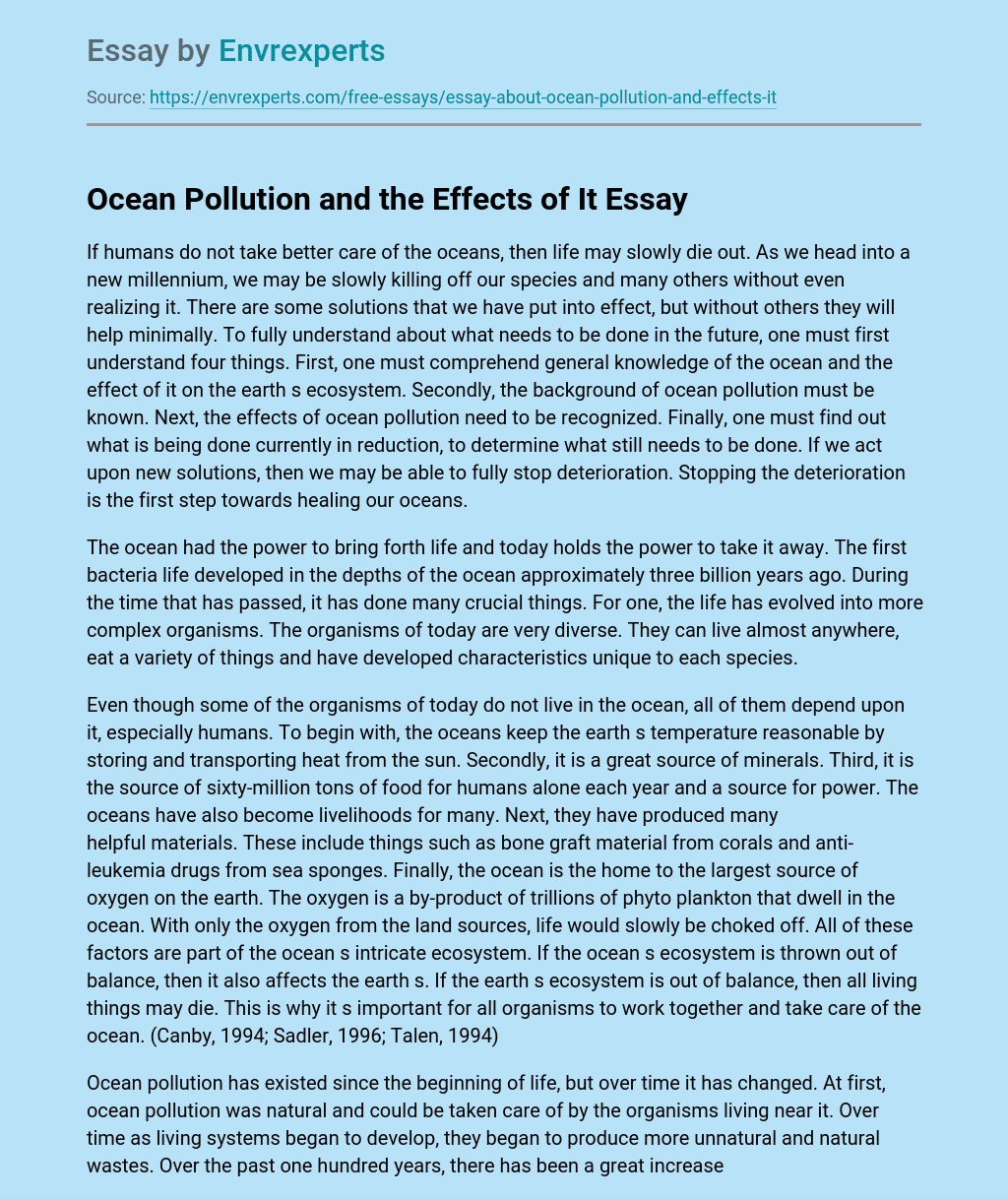