In 1910, the United States spilled 1200 thousand tons of crude oil off the coast of California. Currently the Trump Administration has plans to expand offshore drilling on states coasts such as Florida, Alaska, and California. The expansion of offshore drilling is one of the top controversial issues in America right now. America has a bad history of polluting coastal lines due to offshore oil rigs leaking oil into the water causing billions in damage. Trumps administration has received major opposition in expanding offshore drilling mainly from states such as Florida, California, and Alaska as well as from environmentalists around the country.

Don’t waste time
Get a verified writer to help you with Offshore Drilling: Environmental Murderer or Economic Savior
Hire writer
$35.80 for a 2-page paper

When the Trump administration announced that they plan to expand offshore drilling in America many states started to oppose the plan. In the article "Why Trumps Offshore Drilling Expansion Plan Won't be so ‘Yuge”” by Sam Ori, Ori explains that Trumps recent plan will not make it to fruition due to state opposition. In the article Ori explains that even though the federal government has major control of resources, states have major leverage of key developmental processes.

Off the shore of Alaska, it has been estimated that 23 billion barrels of oil and 131 trillion cubic feet of natural gas can be retrieved. This caused major appeal in 2008 during the recession when gas prices were $100 per barrel. Shell Corporation bid on the rights to the oil in Alaska, but under President Obama's administration, drilling operations were significantly limited causing the Shell Corporation to halt drilling. Because the recession ended during the Obama administration this caused the appeal of Alaska's oil to decrease causing the appeal for offshore expansion to decrease as well. The Eastern Gulf of Mexico has also been targeted by the Trump administration to expand offshore drilling. Its estimated to contain 3.6 billion barrels of oil. Florida Governor Rick Scott has opposed this plan being a long-time opposition to offshore drilling in Florida, winning several cases. But even if the Trump administration happens to convince Florida to agree to expanding offshore drilling, congress has put that area under moratorium (a temporary prohibition of activity) until 2022. This means that even if trump convinces Florida to drill offshore, the probability of his plan being scrapped by the next president is very high.

Many States are opposing Trump's offshore drilling plans. In the article “Trumps Administration plans would widely expand drilling in U.S. continental waters” by Darryl Fears. Fears addresses why many states governors are opposing the future offshore drilling plans. For example, Maryland's Governor Hogan has explained that he is concerned that offshore oil drilling might potentially hurt the environment and natural resources. This shows how state governors are concerned for what might happen to the environment if Trumps offshore drilling plans come to fruition. According to the article The Bureau of Safety and Environmental Enforcement released a report stating that between 7,950 and 9,350 barrels of oil were spilled in the Gulf of Mexico in 2017. These actions confirm many governor's fears that oil drilling expansion will ruin the local environment. New Jersey governor Chris Christie has also taken action to oppose president trumps plans. In the article Fears states, “New Jersey Gov. Chris Christie (R) in August sent a letter to the Interior Department agency that issues permits, saying the state "strongly opposes any waters off our coastline being considered for inclusion in this leasing program," citing a $44 billion beach tourism industry that creates more than 300,000 jobs." This example from Governor Christies shows another reason why states are opposing offshore drilling expansion. From the example we can see that offshore drilling will ruin New Jerseys $44 billion-dollar tourism industry. Offshore drilling will not just affect the local environment but might also put many states economy in jeopardy of losing money and jobs as well. In Florida governor Rick Scott claims that the majority of their economy runs on beach tourism estimated to bring the state $50 billion dollars annually and supply millions of jobs as well. President Trumps offshore drilling plans are described as a double edge sword because it will bring in billions of dollars' worth of oil, but at the cost of states economic security.

We have established that offshore drilling can become very detrimental to the environment but what are the benefits of offshore drilling? In the article “How Offshore Oil and Gas Production Benefits the Economy" by Mark Overholt. Overholt describes different reasons as to why offshore drilling expansion benefits will outweigh the possible disasters that may or may not occur. Overholt states “Offshore oil and gas companies create nearly 840,000 jobs, keeping Americans steadily employed." In this statement by Overholt he states that offshore expansion will create 840,000 jobs in states such as California and Florida. This will result in the local economy flourishing and thriving which will also cause in unemployment rates to decrease.

According to Overholt this significant increase in jobs will also have a ripple effect on other job markets creating more jobs in the economy. Another benefit of expanding offshore drilling is that it supports energy independence, this is when a country doesn't rely on other countries to meet their energy needs, economically this will save the U.S. billions of dollars. We would not have to rely on the middle east to supply the United States with the energy needed to run Americas day to day life. With this economic increase in local economy many of the states that oppose this expansion of offshore drilling will see an increase in local businesses. Big corporations such as Exxon and Shell spend millions of dollars in the private sector in order to help them extract the oil from the ground, its estimated that around $450 million dollars will be poured into local businesses around the states willing to accept expansion of oil drilling. It easy to see how this can benefit many state economies right from the start and will only benefit as the years pass. Many states are worried about the environmental issues that offshore drilling might affect. With recent oil spills many states are hesitant to accept the expansion of offshore drilling. But many oil companies have taken many precautionary measures to help prevent oil spills in the future. Oil companies realize that their oil rigs destroy some of the local reefs that many fish species live, so to combat this they have engineered their oil rigs to help create new homes for the local fish species. These are some of benefits that offshore drilling will provide to local economies and some companies have taken steps to rectify the damage that oil rigs cause. President Trumps plans for offshore drilling is a very controversial issue that has flown under the radar compared to other issues such as gun violence and abortion. My stance on the issue is that we should expand offshore drilling in the United States.

Expanding offshore drilling in the United States will bring many economic benefits that will trickle down to local economies raising the overall US economy drastically. As mentioned before that offshore drilling can become very dangerous to the local environment if not handled properly. But many private corporations have taken serious measures to prevent oil spills, in the US. In the article "Offshore Drilling is Safer" by Erik Milito. This article gives evidence as to how the federal government and private corporations have taken great strides to improve the safety of oil rigs. With this collaboration private companies have reexamined every aspect of offshore drilling to ensure the Oil companies realized that their methods were not working and were being detrimental to their workers and the local environment. Oil companies have now been obligated to collect data and analyze it in order to improve the safety and efficiency of oil drilling. Also, the federal government oversaw the changes made and approved their new methods and equipment. This gives reassurance to state officials that have been opposed to the expansion of offshore drilling for decades. The economic potential by expanding offshore drilling is amazing, as stated earlier that by expanding offshore drilling the US will be able to achieve energy independence. This will help the United States pull away from the middle east and be able to provide citizens with energy without having to pay other countries for oil. As well as the ripple effect it will have on local economies. By expanding offshore drilling on the US coasts, it will bring thousands of jobs to the states then trickling down to local businesses helping them in the long run. Many state governors are worried that offshore oil drilling will hurt their environment and ruin their billion dollar tourist economies. But with the collaboration of the federal government and oil companies as well as the trickle down affect it will have on the local economy. 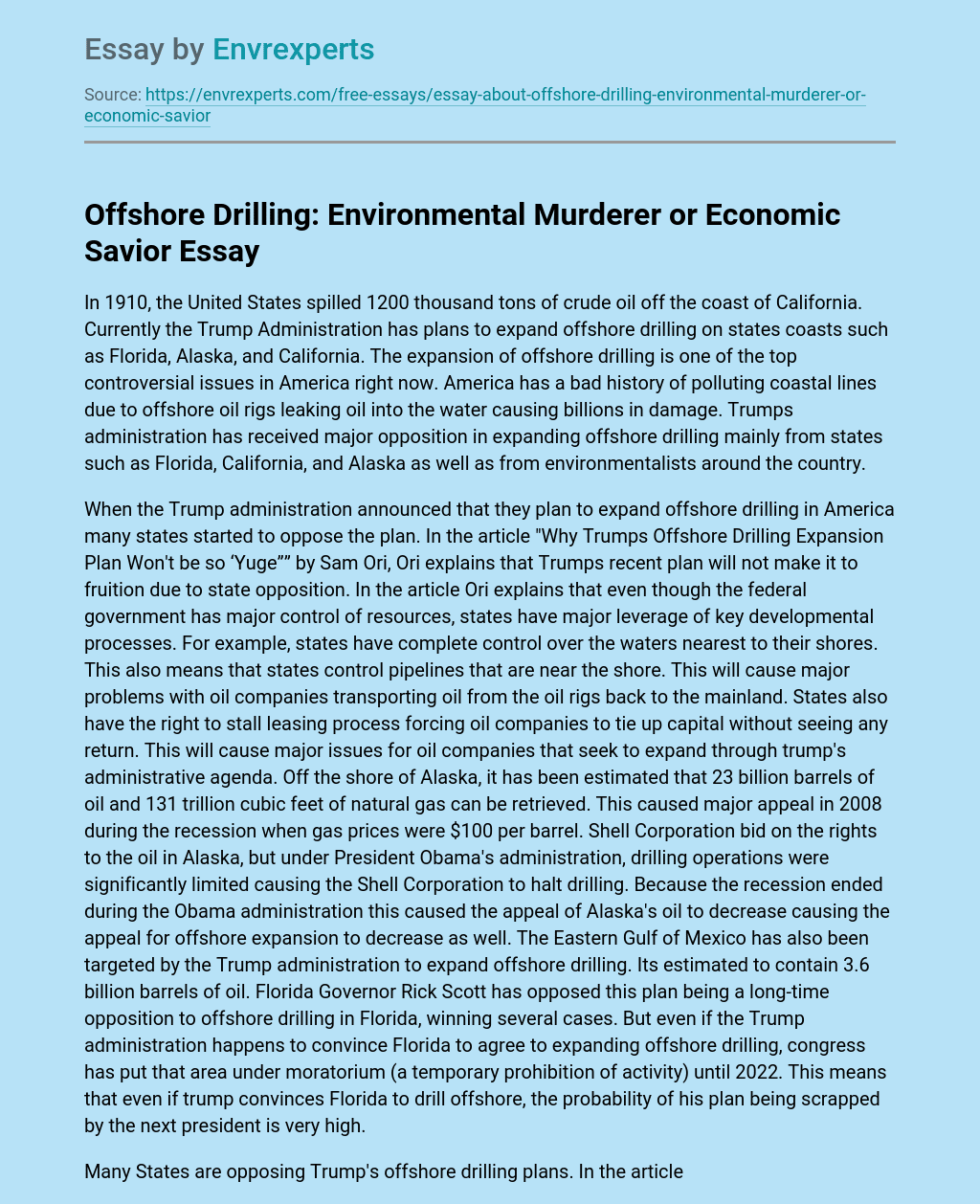