Old growth forests in the Northwest have fallen victim to the activities of human beings. Companies are replacing these vital forests with plantations or second-growth forests, resulting in the disruption of the vital network of harmonious relationships that sustain the intricate old-growth forest communities. Many people are oblivious to the fact that these forests are essential to our planet. Not only do they provide homes for many wildlife species, but they also accumulate biomass more efficiently than any other ecosystem on Earth, are responsible for the majority of recycled nutrients in the forest ecosystem and play a significant role in the protection against fires and floods and recharging of proximate streams and aquifers.

Don’t waste time
Get a verified writer to help you with Old Growth Deforestation
Hire writer
$35.80 for a 2-page paper

It is proven that the destruction of these forests has had a severe ripple effect nationwide.

In addition to old-growth deforestation having a tremendous effect on our environment, it also affects our daily lives. For example, the region's salmon stocks are dependent on the survival of these forests.

If they were destroyed, sixty-two thousand people would be without a job. The damming of rivers, pollution and over fishing are all involved in the decline of these forests. The sediment deposited in streams would smother the spawning beds and disrupt the feeding patterns of young salmon. It is evident that the disruption of these forests will have a wide-spread effect on our nation and it is up to us to protect and prevent any further harm to these crucial forests.

The forests provide a home for many species.

The northern spotted owl finds its home in the 200-year-old Douglas fir forests of the northwest, and has now been forced to live in seventeen reserved national forests and five Bureaus of land management divisions. This sudden removal of the spotted owl's habitat, taking into account their low reproductive and survival rate, has resulted in the bird becoming and endangered species. About 4,000 to 7,200 spotted owls exist today. Vandana Shiva states that the spotted owl is an indicator species, meaning its condition signifies other species endangerment.

The habitat of the owls has become protected territory, and free from logging, for it was added to the federal list of endangered species. This lead to constant disagreements between Timber officials and environmentalist advocates. In Canada 60% of old growth forests on public lands have been cut down and 90% is a result of clear cutting. Clear cutting means that the government places a small tax on each tree cut. The other side to the agreement states that no cutting is permitted in previously agreed upon areas. The government is then inclined to pay the Lumbar companies a large sum of money to equal the value of the trees. This in turn caused huge controversy, for the government would end up paying more money in order to protect these forests than it would receive from the Lumbar companies once the trees were cut. To complicate things further, there is a high demand for Canada's lumbar worldwide so slowing down cutting would be hard and logging and millwork provides jobs for a number of people. This only increased the Lumbar companies resistance in the request to stop cutting. Soon the administration produced a compromise that pleased neither side; both sides claiming that the compromise favored the other.

These days' plants are being treated as machines, they are engineered for lucrative purposes and the fact that they are living organisms is ignored. In our selfish determination to transform nature into a source of income, we have forgotten the widespread effects it will have on our environment. I feel that some potential solutions to theses situations would be education and setting some basic laws to conserve our environment. I feel that the public should be more aware of what is being done to our environment. If they know how the deterioration of natural forests ultimately effects them, there would be a greater concern among us, thus leading to a greater number of individuals willing to help preserve our environment and prevent any further damage from happening to it. I think laws should be passed to prevent companies from destroying our environment. If more people were aware of the effects of our damaged environment on them, more people would push for such laws to be passed. 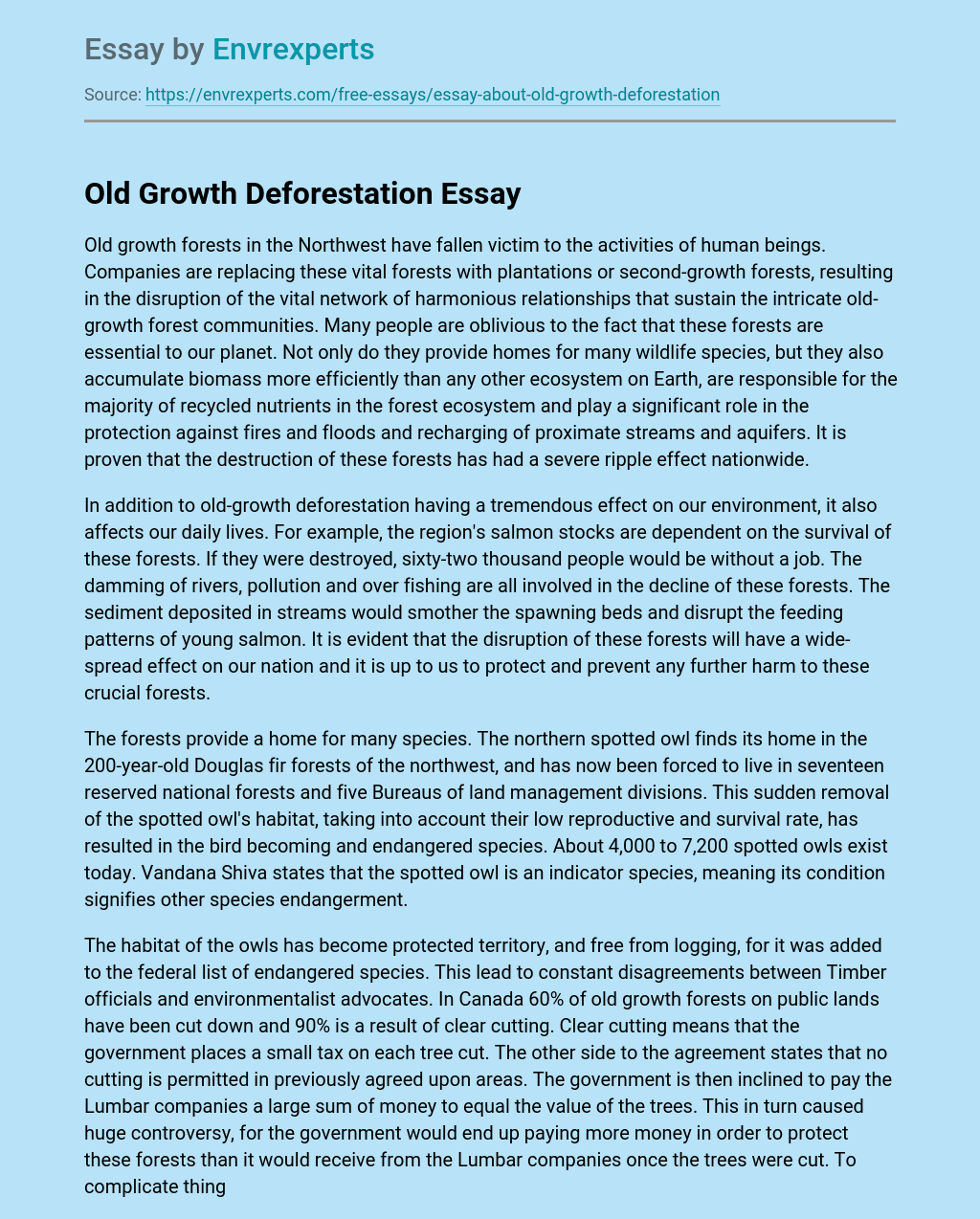