Indian ceramic sanitary were industry is the one of the growing India. This industry is playing major role in growth of Indian GDP. Five Force analysis of the industry derive the competitive position picture and industry attractiveness for new and existing players. Researcher reviles the conclusion, on driving forces, industry‘s competitive force and attractiveness of Indian sanitary ware industry. Researcher identified various factors which will impact to the industry and also recognized opportunity and threat for industry. This paper identified the key success factors and growth drivers of the ceramics industry.

Don’t waste time
Get a verified writer to help you with Opportunity and Threat of Indian Ceramic Industry
Hire writer
$35.80 for a 2-page paper

A paper derives overall attractiveness of industry and it will help to decide position of the existing and new players within the industry.

GROWTH DRIVERS OF THE INDUSTRY:

Well-organized mechanized processes, Technological innovation (Nanotechnology, 3-D printing, large size tiles and double vitrified tiles), Supply chain management and distribution, Branding and Promotion strategies, Product Innovation, Government support, Market Knowledge, Partnership (Co-operative partnerships between suppliers, dealers, distributors, employees and the major customers must become a priority) Logistical competence (Logistics – be it inbound or outbound – is very big challenge. This is critical for success in Indian markets where high value is attached to time & quality) Technological competence: Use of world-class technology for production and creative designs will help an overseas supplier gain an upper hand over competition, Product range (A foreign supplier should be competent enough to understand the cultural diversity and satisfy their demands of varying designs, price points, quality and style effectively in order to attain success), Timing of entry (The domestic Indian ceramic industry is expected to witness an above average growth rate in the years to come and also the export market is booming. This lends a very good opportunity for foreign suppliers to make a successful entry in the Indian markets).

Government support from various schemes such as MSE- CDP, IIUS for cluster development, Government support for technology up gradation (CLCSS and NMCP), and Government support for promoting exports of SSI clusters (MDA and MAI). Initiatives are taken for cluster modernization and restructuring by MSME, SIDCO. Initiatives are taken to improve energy efficiency by BEE and TERI. Lowered Goods and Service Tax is expected to narrow down from 28% to 18%. Delocalization (Delocalization of global production , many developing countries succeeded in attracting industrial investments from the international players), ,Sourcing globalization(Sourcing globalization (i.e. the DIY organizations are more and more competing on cost bases and their procurement departments are continuously looking for reliable foreign vendors);Low cost production (Adoption of low cost production processes. The adopted technologies seem not always to be the best choice if compared to the final target quality (lower cost processes exist), Rising population (The Indian population is expected to grow at a CAGR of one point two per cent during 2010-2020. According to McKinney, 590 million people (twice the size of the US population) will be urbanized by 2030), Burgeoning middle-class (The size of the upper middle-class household group is expected to grow from 58 million in 2010 to 110 million by 2020 (forty per cent of total national household from twenty four per cent in 2010). This segment is adopting international trends much faster than expected and consumption is moving beyond big centers to smaller cities) ,Low per capita consumption (India’s per capita ceramic consumption is merely 0.46 mn sq while the world average is three that at 1.20 mn sq m, china’s average is more than five times higher at 2.26 mn sq m.) ,Growing urbanization (According to reports, India has 42 cities with more than a million populations, which is expected to rise to 68 by 2030, which will propel ceramic consumption) ,Affordable housing (Affordable housing demand is expected to grow at a CAGR of thirteen per cent in 2011-2013 . According to report, India will witness a demand of 3.94 million units during up coming years), Nuclear families (India’s dependency ratio has declined from fifty eight per cent in 2005 to fifty five point six per cent in 2010 and is expected to drop to fifty two per cent by 2020. This reduction will increase housing and related product demand),Commercial real estate (The Indian commercial space is expected to grow twenty to twenty two per cent over the next five years, expected to reach 243.5 mn sq ft, respectively in future) Retail sector growth (The annual demand for retail space is expected to remain at 10-20 mn sq ft with strong growth coming out of tier one and two cities, catalyzed by consumerism and organized annual retail growth of twenty five to thirty per cent) , Hospitality( India’s tourism industry is expected to grow from USD 67.2 billion in 2010 to USD 262.7 billion in 2021. India has over 2,00,000 hotel room across various categories and is still facing a short fall of over 1,00,000 rooms .)

Availability raw material (Quality raw material with low cost), environmental issues (air, water pollution, lack of awareness regarding environment friendly working condition, availability solid west management system), social issues (availability of skilled manpower), products dumping from China and energy availability, Barriers to entry (Reducing barriers to entry the local market. Regional trade agreements and the relevant associated phasing-out tariff and non-tariff barriers are often an actual threat, rather than an opportunity, because of the fast growing exposition to competitors and the weakness of the Indian competitiveness), New competitors (Aggressive new competitors, with a strong increase of the regional installed capacity. Threats are not coming from traditional global industries such as Italy or Spain, which can compete only in the medium – high price segments, but from consolidated top exporters (Turkey), growing global operators (UAE) and emerging industries (especially Iran, but also a small country like Morocco can become a dangerous competitor), Products quality (Global trend towards improvement of the overall products quality. Most competitors seem to be more ready than India to follow the latest trends in functional, technical and esthetic requirements of the most developed markets), Duty of Anti-Dumping (It has been observed that dumping of ceramic from china is the biggest problem of the industry. An anti-dumping investigation concluded in 2003 has also confirmed this problem and levied anti-dumping duty of US $ 8.28 per sq mt on ceramic imported from china. Despite the levy of anti-dumping duty, china accounted for over forty two per cent share in total imports of unglazed ceramic by India. The unit price of Chinese unglazed ceramic products stood at US $ 3.1 per sq.mt.as compared to the world average of US $ 3.8 per sq.mt..

The Exim bank study is of the view that such dumping is drastically reducing profit margin of domestic producers, unorganized ceramic sector (Imports and the unorganized ceramic sector are the major threat to the Indian ceramic market. Freight, power and gas are the key cost-related issues impacting the industry), Product Design (Copying of ceramic product designs is also a threat for the business resulting in undue loss to the company), Growth (The slowdown in allied industries cardinally forestalls the growth of the ceramic industry. The competition offered by the unorganized players, who comprise of fifty per cent of the total industry is a major impediment as well. The ever increasing operating costs, supply of natural gas and its prices, availability and procurement of raw materials whose prices again tend to be volatile, foreign exchange risks, gaps in working capital cycle and availability of skilled labor for ensuring quality of the output are the menacing aspects affecting the industry. Usage of raw material (Feldspar & quartz are critical minerals which are used as key raw material in the manufacturing of ceramics.

These are rare minerals found in the sediment of the earth. Cost structure (Ceramic sector is going through a rough phase as high input costs are affecting the margins of the producers. Energy account for nearly forty per cent of input costs for the ceramic industry and it has made manufacturing in India very expensive compared to neighboring nations) Fuel Consumption (Lack of natural gas facility and arrangement for natural gas facilities as well as rising cost of the gas facilities keeping profitability low. Modernization (The ceramic industry has been modernizing continuously, by newer innovation in product design, quality etc. However, in order to make the ceramic industry domestically and globally competitive, initiatives in the national and international level for constant technological and quality up graduation must emerge).

Bargaining Power of Suppliers: This force identify, the bargaining power of our suppliers in the industry based on various factors. Raw materials are supplied by different suppliers and organizations are highly depended on them, so, suppliers also have the bargaining power option which may effect on industry to sufficient amount of production level. Based on the industry analysis researcher found that Bargaining power of suppler in ceramic industry is moderate to high,
Threat from New Entrants: In this industry government gives different types of subsidies and relaxing laws and regulations which attract new firms to enter in this industry. Based on the factors researchers conclude that Threat of new entrance of the ceramic industry is moderate.

Threat from Substitute Products: As industry products are depends on customer sentiment and willingness to buy those and the existence of different substitute products, involves competition among the funds. There is a less numbers of substitute product are available within the industry so researcher found that Threat from substitute in ceramic industry is low to moderate.

Rivalry among Competition: As under this industry there are many firms operating their business in the economy. So, there is a strong rivalry among the competitors. According to researcher Rivalry among competition in ceramic industry is moderate to high.

Researcher has been concluded that bargaining power of buyers and threat from substitute products is low to moderate so it’s good for industry in terms of industry attractiveness. In terms of bargaining power of suppliers and rivalry among competition it’s moderate to high so it’s not attractive for the industry. Threat from new entrants is moderate so it’s somewhat attractive.
The present sanitary ware is running at higher cost as raw material cost, interest cost, fuel and manufacturing cost are increasing, gas price are one of the major issues in the industry. Anti-dumping law is requiring stopping dumping of ceramic sanitary ware in India, to protect the interest of Indian players. Raw material such as feldspar and Quartz essentials to the industry should be stopped from being exported to the other countries to protect the interest of the domestic player. High cost of interest and other inputs have made small players inefficient to function, and gradually they are merging with big units such as Hind ware, Parry ware, Cera etc. only big players have been able to fight against the rising cost of manufacturing. All top organized player competition cut throat with each other to gain the market share.
The key success factor of the Indian sanitary ware Industry is manufacturing process, new technology, dealer’s network and Marketing and promotional strategies.
Political, legal, social and technological environment are moderately favorable to new players to enter into the Industry. Porter’s competitive forces indicate attractiveness to enter into the markets. The industry is at growing stage and will be expanded into the future as far as Industry Life Cycle is concerned. 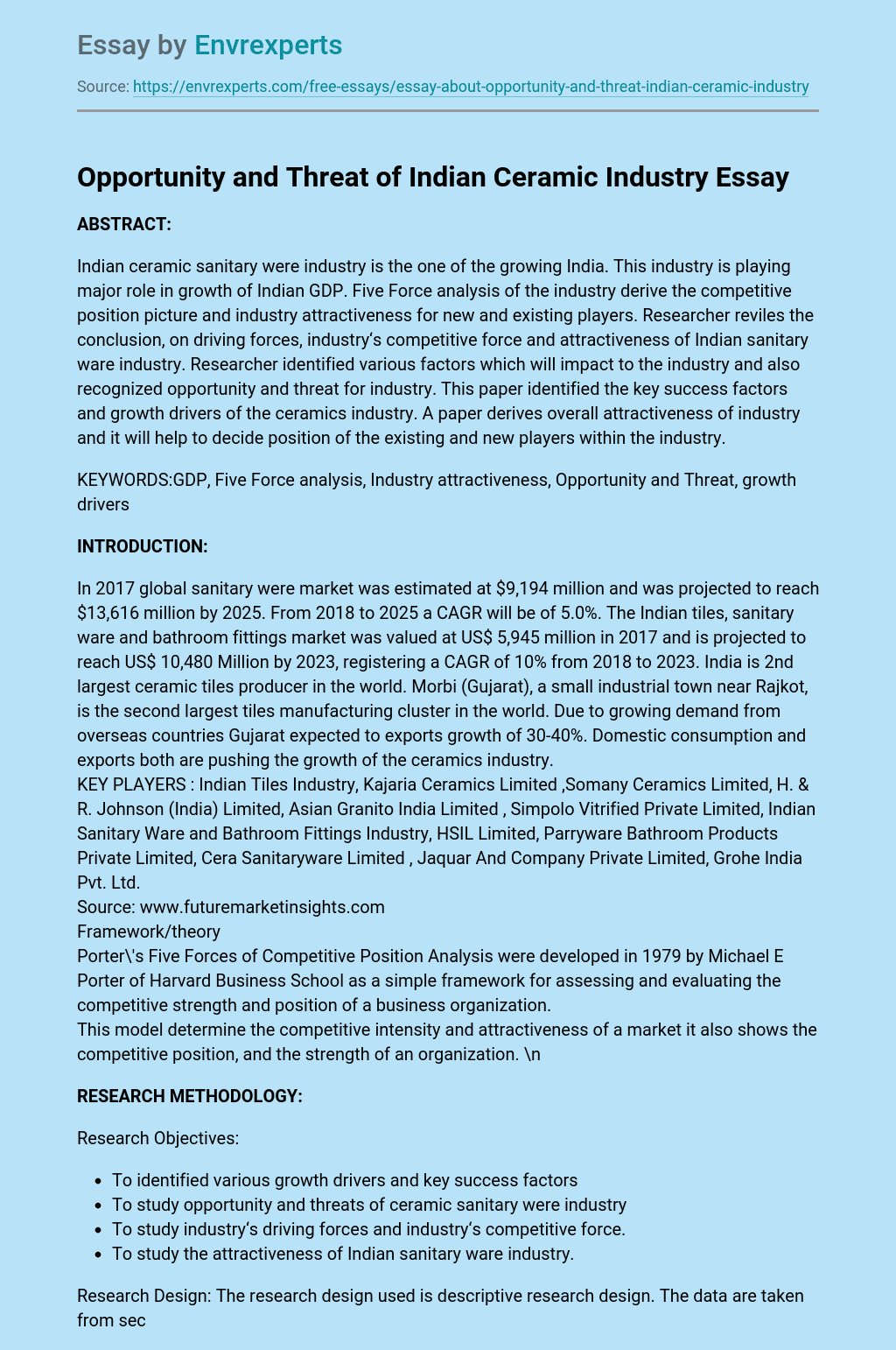