Article 2 covers the right to life. It was described by the Strasbourg Court in the McCann Case as “one of the most fundamental provisions in the convention”. Article 2 places on states a positive obligation to protect their citizens right to life. This can be done in two ways. Through its substantive and procedural elements meaning that states must act quickly in order to protect lives but also investigate its losses.
It was set out in the case Osman V UK, that states must take “practical measures”, in order to safeguard the life from the criminal acts of third parties.

Don’t waste time
Get a verified writer to help you with Osman Obligation to Different Country
Hire writer
$35.80 for a 2-page paper

In this case the applicant’s family were the target of a stalker who broke into their home and shot and killed the father. This positive obligation applies where the following conditions are met as stated in the case “the authorities knew or ought to have known at the time of the existence of a real and immediate risk of the lives of an identified individual or individual from the criminal acts of a third party”.

In this case it was found that their was no positive obligation as it wasn’t reasonable for the police to assume that the lives of the Osman family were at risk, as their was no evidence or event that would suggest what ended up happening. This obligation is known as the Osman Obligation.
In the case of Gonadze V Ukraine, the Osman obligation was applied and a violation of article 2 was found.

The court held that the authorities had been “blatantly negligent” as the death of the journalist was after 18 other journalist had been killed in Ukraine. The real and immediate risk should have been identified by the authorities. The Osman Obligation was extended to cover domestic violence in the case of Opuz v Turkey, where the applicant alleged that the Turkish authorities failed to protect her and her mother from the domestic violence that the authorities were aware of as a petition was submitted to the prosecutor’s office requesting that the police to help. The authorities did not fully investigate the situation and two weeks later the applicant’s mother was killed. The court held that an attack should have been foreseen by the authorities. The government argued that their interference would have breached the victims rights under article 8, which was dismissed by the court with them stating “in domestic violence cases perpetrator’s rights cannot be superseded victim’s human rights to life and to physical and mental integrity”.
The Osman obligation was extended in Oneryildiz V Turkey, where the court held that the obligation as stated by Harris “requires that practical measures be taken in response to dangerous and other life-threatening activities”. This case involved a accident at a rubbish tip that was operated by the local authorities. The Strasbourg court held that the Turkish authorities were to blame for the loss of life, because an expert report had identified the risks associated with the rubbish tip, but the Turkish authorities never took any action to prevent these risks. It was stated in this case “that the obligations must be construed as applying in the context of any activity, whether public or not, in which the right to lift may be at stake”. The Osman obligation also applied to natural disasters after the Budayeva and Others V Russia. In this case mudslides occurred that caused a death and damage. The authorities knew of this risk as it is a common thing in the region every year and they had not created a form of warning system or defense system towards the mudslides.
It applies to people in detention as well. As stated in Harris, “the state must adapt protective measures for the protection of their lives and provided them with requisite medical assistance”. The state must take responsibility for the deaths of the detainees and be able to show that they provided the correct medical care or protection in order to preserve the lives of the detainees. This was extended in the case of Jasinkis V Latvia. This case involved medical care being given to a detainee in a timely manner. In this case the applicant’s son who was notably deaf, and mute fell down the stairs and had hit his head. The police did not wait for an ambulance and took him to the police station and never offered him any medical attention under the assumption that he was simply intoxicated. The lack of medical attention led to the applicant’s son to die from his head injuries. As stated by Jacobs, “the court reiterated that the persons in custody are in a vulnerable position and the authorities are under a duty to protect them”. In the case of Keenan V UK, the Osman obligation was extended to cases concerning suicide by a detainee where authorities should have known that there was a risk of the detainee committing suicide. In this case a young man who was suffering with mental health problems committed suicide in prison. It was found that there was no breach of article 2 as the prison authorities had done all that could be expected of them in their attempts to prevent the detainee from committing suicide.
The court also holds the state responsible under article 2, where a person released from detention causes a death. This was found in Branko Tomasic and Others V Croatia, where a husband who along with his jail sentence also had to complete compulsory psychiatric treatment after threatening the life of his wife and baby with a bomb, killed his wife and baby after he was released. The court found that no measures were taken to stop the husband from carrying out his threats. The Croatian authorities were found to have failed under article 2.
The Osman Obligation was extended in the case of Bljakaj and Others V Croatia to cover the protection of the public at large in a life-threatening situation, In this case the authorities did not take reasonable measures to protect the life of a lawyer who was killed by a man who was mentally disturbed. According to Harris, the court held “that the states have an obligation to afford general protection to society against potential violent acts of an apparently mentally disturbed person”.
Through the Osman Obligation, the case law for article 2 ECHR has been developed to cover the right to life in many circumstances. It leads little room for an opening for a government to neglect its citizens right to life as it is so heavily precedented and covers most possible situations. 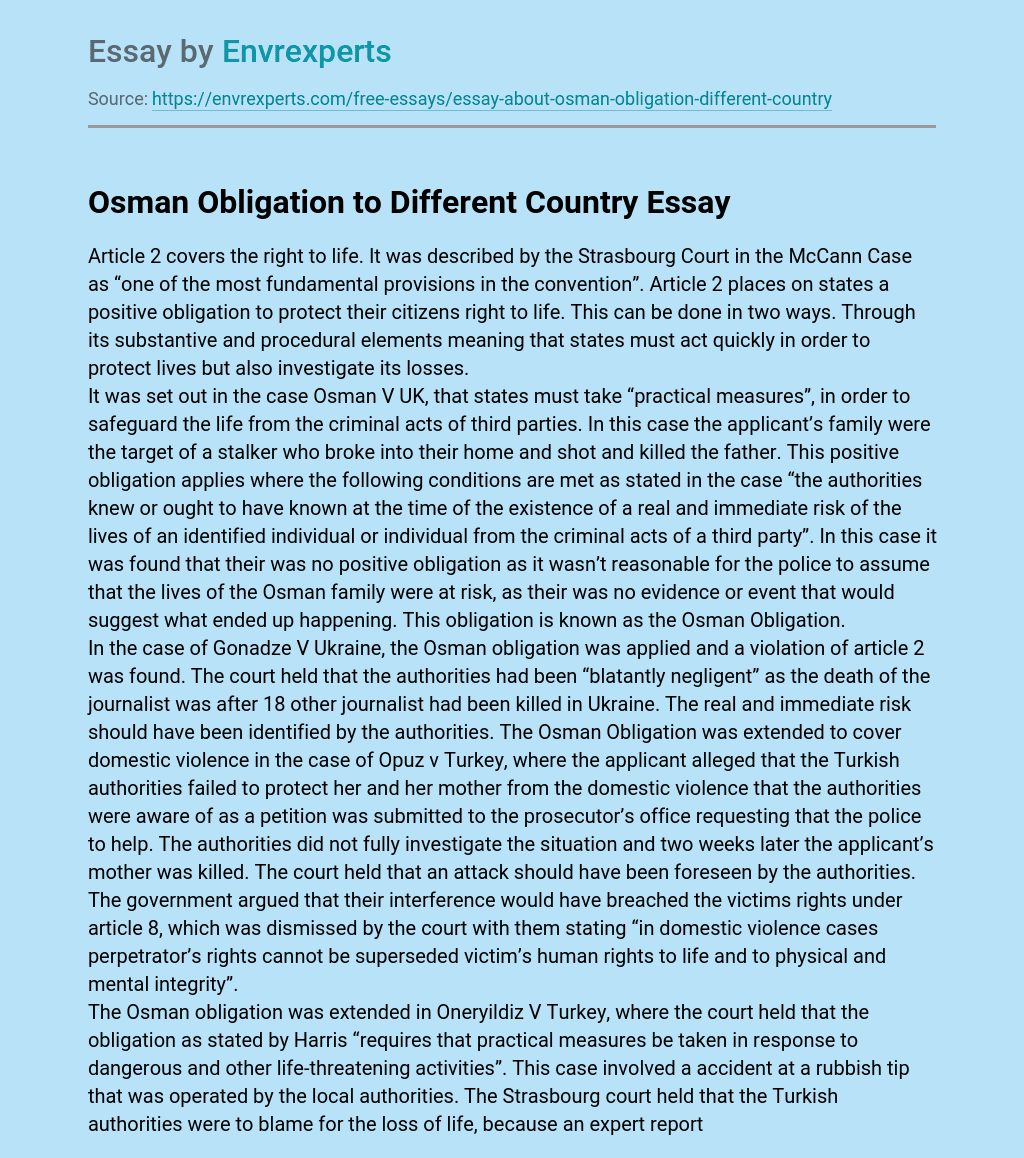