The Earth currently has well over seven billion people, and these numbers have been suggested to increase in the near future. With this in mind, I believe that the Earth is overpopulated because mortality rates have decreased due to extensive research on medicine. The problem is not that birth rates are increasing because it has been demonstrated that economic development and urbanization have led to decreased birth rates (Knox and Marston, 2016).

Don’t waste time
Get a verified writer to help you with Overpopulation and Water Quality
Hire writer
$35.80 for a 2-page paper

Instead, the transitional stage of the Demographic Transition Model demonstrates that fewer people are dying because they have more access to necessary supplies such as food and water (Knox and Marston, 2016). Additionally, during the transitional stage, populations have access to better medical technology and as a result, decrease mortality rate while increasing the population rate (Knox and Marston, 2016). Most population growth occurs in less developed countries because they do not have a lot of access to education and health care, which results in both higher death and birth rates. To combat high death rates, women in periphery countries typically have high total fertility rates, which contribute to overall population growth.

With his theory and philosophy, Thomas Malthus would most likely answer similarly to me and state that the Earth is overpopulated. In his theory on population growth, Malthus believed that if specific resources increase, then population growth will also increase as we consume more resources (Knox and Marston, 2016). However, Malthus believed that as we continue to consume more resources, they will eventually be used up and will no longer support populations.

As a result, not having access to useful abundant resources such as food and water will result in the decline and eventual collapse of human society. Although Malthus’ theory is compelling and has relevant ideas, several individuals have come to critique his theory. One individual that critiqued Malthus was Julian Simon, who was more optimistic about the relationship between humans and resources. Simon argued that a positive population growth allows for more humans to create solutions to problems involving resource scarcity (Ahlburg, 1998). Simon states, “A larger population influences the production of knowledge by creating more minds to generate new ideas” (Ahlburg, 1998). Similarly, both Karl Marx and Friedrich Engles believed that technological development and distributing resources evenly would solve population and resource issues (Knox and Marston, 2016). Considering Malthus and his critiques, I think that both the total human population needs to decrease while resources need to increase so we can ensure that humans can thrive in years to come. Environmental protection attempts to improve and protect the environment by keeping it clean and safe, while reducing the amount of pollution in geographical areas. The Environmental justice movement attempts to give all humans regardless of their race, the necessary environmental benefits that they need to stay healthy in their communities (Knox and Marston, 2016). Pollution from toxic waste is a significant issue that negatively impacts both air and water quality, especially in urbanized geographical areas. In particular, China has recently industrialized and urbanized, which has led to large amounts of pollution. As China continues to urbanize, the air has become increasingly polluted with concentrated particles (Zhang et al, 2007). Zhang and his collaborators conduct their study in Beijing, which they state polluted air particles can cause numerous problems to the overall environment as well as affecting the health of humans. These particles were responsible for human respiratory issues in Beijing and increased the overall mortality rates. Similarly, economic cost increased to 6.55% of Beijing\'s total GDP (Zhang et al, 2007). This study was necessary to include because it provides significant evidence that people of different race are introduced to harmful toxins as a result of urbanization.
A specific example that demonstrates that people have exercised their right to environmental justice includes a blockade that occurred in Canada in 2013 (Knox and Marston, 2016). About 300 natives blocked the road so that an energy company could not examine areas they could harvest for oil and gas. Harvesting oil and gas from the ground is called Fracking, which has negatively impacted both land and water quality. Fracking has become a significant issue in environmental justice, as several protests have been conducted globally. Just in the United States, there have been about 420 communities that have protested Fracking on their land (Knox and Marston, 2016).
Another example of an environmental justice movement occurred in Warren County, North Carolina, in 1982 (Skelton and Miller, 2016). Mostly African American Inhabitants of Warren County blocked the road so that dump trucks could not dump large amounts of soil into a landfill. The soil contained toxic PCBs that were reaching the water supplies and contaminating it. These protests have led to the creation of environmental justice organizations that attempt to protect the environment while expressing the need for extensive social change in urban areas (Skelton and Miller, 2016). In conclusion, environmental justice is necessary to ensure that all humans have equal access to environmental protection resources so their communities can remain healthy and safe. 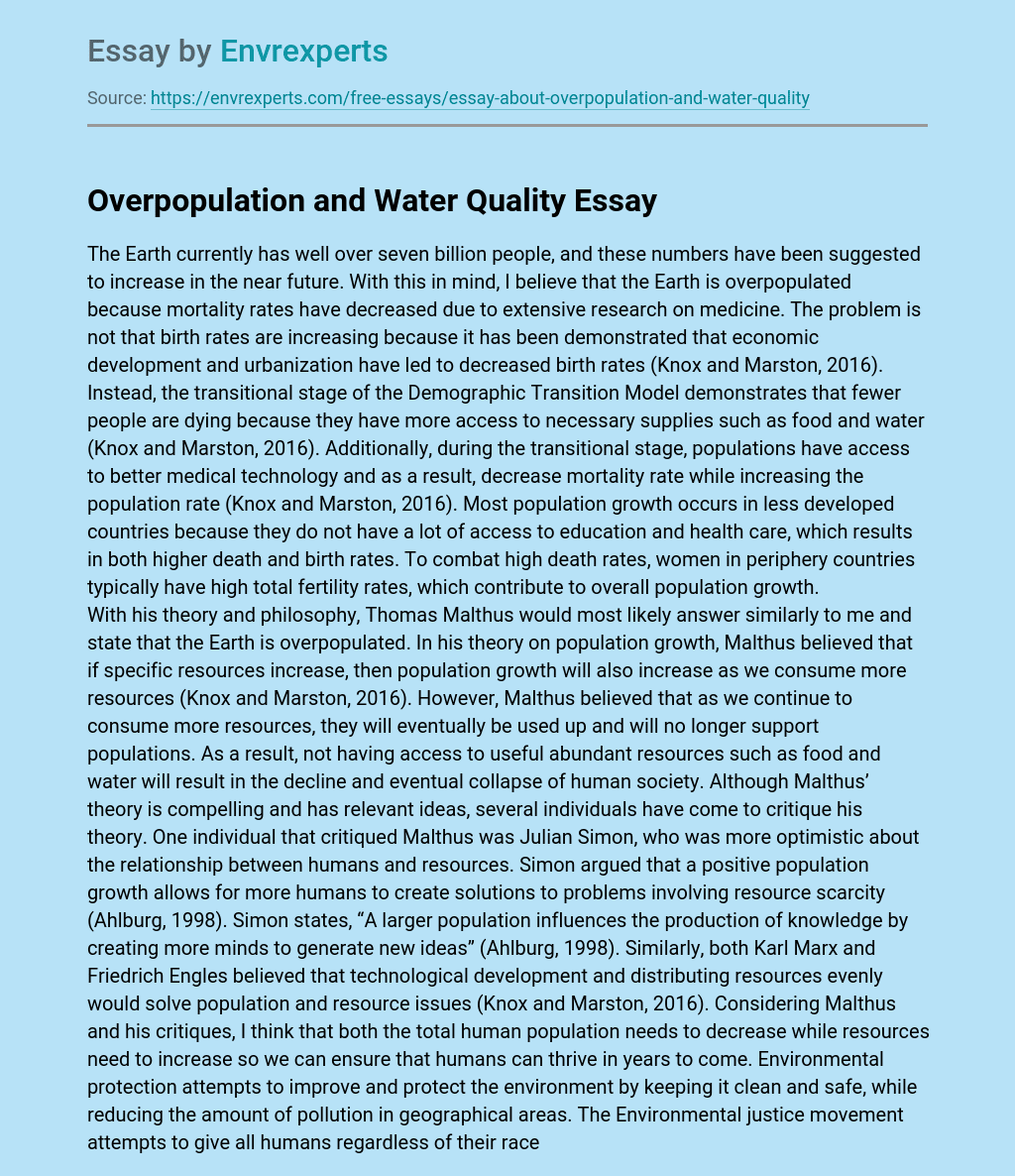