An Overview of Canadian's Struggle With Climate Change

Canada is one of the best places to live in the world because it has so much to offer. There are ten provinces and three territories, and it is the second largest country in the world with over thirty million people and growing. There are two official languages, English and French; however, it is so culturally diverse that a variety of ethic groups can coincide together, as they strive for a better life. Canada has one of the highest literacy rate, as well as good health care and education systems, which means that they have a high standard of living.

Don’t waste time
Get a verified writer to help you with An Overview of Canadian’s Struggle With Climate Change
Hire writer
$35.80 for a 2-page paper

The citizens of Canada live in a democratic society where they are all equal and are given the freedom of speech, without fear of a oppressive government. Another benefit that Canada presents is their ability to move with technology, which plays an important part in their future as well as their current state in the booming economy. It would appear that Canada is an ideal place live, yet in order to succeed and live in this fast past environment, a few unknowingly sacrifices have been made.

Canada is one of the main contributors of emission and other deadly gases, which leads to global climate change and therefore should take a more aggressive approach in finding solutions. By not concentrating on finding ways to reduce emission gases, the ozone layer continues to deplete, and therefore causes the climate to change world wide. Nevertheless it is also important to understand how exactly climate can change.

Climate change, or global warming as it is other wise known as, is the result of when the levels of greenhouse gases rise and less infrared light, or heat, escapes the earth s atmosphere. The earth s atmosphere is made up of seventy-eight percent of nitrogen and twenty-one percent of oxygen.# That means that one percent of gas that is left comes from water vapour, carbon dioxide, chlorofluorocarbons (CFCs), nitrous oxide, and methane, which are other wise known as trace gases. Human activity can also impact these trace gases and therefore can alter the climate in the long run. Looking at the infinite carbon dioxide cycle, it is easy to see how carbon dioxide is absorbed in and out of the atmosphere.# Plants breathe in carbon dioxide through the process of photosynthesis. They do this to sustain life, while getting rid of a waste product. Humans contribute to the amount of carbon dioxide by using transportation, residential and commercial building, industrial factories and also by the land clearing of trees. This is just one example of a trace gas, but just imagine what happens when all of these trace gases are built up together. These trace gases can slowly destroy the ozone layer, which allows the sunrays to penetrate through, increasing the earth s temperature, and altering the global climate. At the present time with the information of global warming, possible solutions about reducing emission gases should be discovered.

Now that most Canadians have been aware about global warming, the government of Canada along with the United Nations Framework of Convention on Climate Change (UNFCCC) has implementing possible solutions to reduce the levels of gases being introduced in the environment. Established in nineteen ninety-seven in Japan, the Kyoto protocol main objectives were to make the issue of climate change well acknowledged, and also to have large industrial countries to reduce the amount of emission gases they produce. This affects

Canada a great deal because then the government has to regulate how much energy and gases can be used. Industrial, transportation, electrical and fossil fuel productions had the highest cases of emission gas releases in nineteen ninety-seven. Since the issue of the Kyoto Protocol, Canada is trying to cut down emission gases by twenty-six percent. Even recently the Canadian government has put together an action plan so that they use renewable and alternative sources of energy that will not harm the environment as much.# What the government is trying to use for energy consists of solar rays, wind, hydroelectricity, and biomass energy to produce thermal energy without depleting natural resources or releasing toxic gas. With this new technology of alternative energy, Canada can continue to prosper while cutting down on harmful emission gases. Other than the government  attempting to create new ways of reducing energy by investing a lot of money from their economic systems, education is somewhat overlooked. It is cost efficient, long term solution with even the littlest of changes that can make a big difference. Take David Suzuki for example, like many Canadians he is dedicating his life to helping the environment. He educates the general public through television, newspaper articles and web sites to make a choice in reducing the excess of exploitation. He truly cares about the environment and wants each Canadian to appreciate it before it is gone or destroyed due to negligence.

What if Canadians choose not to act on these possible solutions, what would happen to the severity of Canada then? Perhaps total chaos would occur because the standard of living would decrease, and life would be difficult to sustain. The most obvious threat of global warming is the depletion of the ozone layer, which could lead to cancer because the sun uva rays would be so strong. Unfortunately, that is not all, the loss of the ozone also means damaged crops, and heat waves which can lead to over exertion or death. The polar ice caps would melt and therefore would increase sea levels. The coastal provinces would most likely be flooded, and in other parts of the world, a drought could occur. Canada alone could experience the temperature to rise between one and three and a half degrees which will defiantly impact the fish population, forest, and agriculture, not to mention the people depend on those resources in the economy.

The government of Canada should do more to enforce these possible solutions to reduce emission gases, in order to prevent a terrible situation of global warming. Recently at the UN Climate Summit in Hague, all parties could not reach an agreement. Canada sided with the United States and Japan by arguing for large controversial loopholes that were incompatible with Europe s integrity.# Canada, United States and Japan are all three of the most powerful developed nations, and it appears that they do not want to take responsibility for their countries actions? It seems that the consumption patterns and profit levels are blinding most Canadians about the danger of global warming. Canada is not invincible and therefore should be careful in planning and using excess energy. Every little drop of carbon dioxide, water vapour, chlorofluorocarbons (CFCs), nitrous oxide, and methane, adds up, and eventually makes its way into the atmosphere. If only Canada could reduce emission gases by two percents a year, for ten years, seven thousand pounds of Carbon dioxide will be lost.# That may not seem like a lot, but in time, it will make a huge difference in the fight against global climate change. With so many good things going on in Canada, it really is one of the best places to live in the world, and for those reason Canadians should do what ever it takes to keep it that way.

An Overview of Canadian's Struggle With Climate Change. (2021, Oct 31). Retrieved from http://envrexperts.com/free-essays/essay-about-overview-canadians-struggle-climate-change 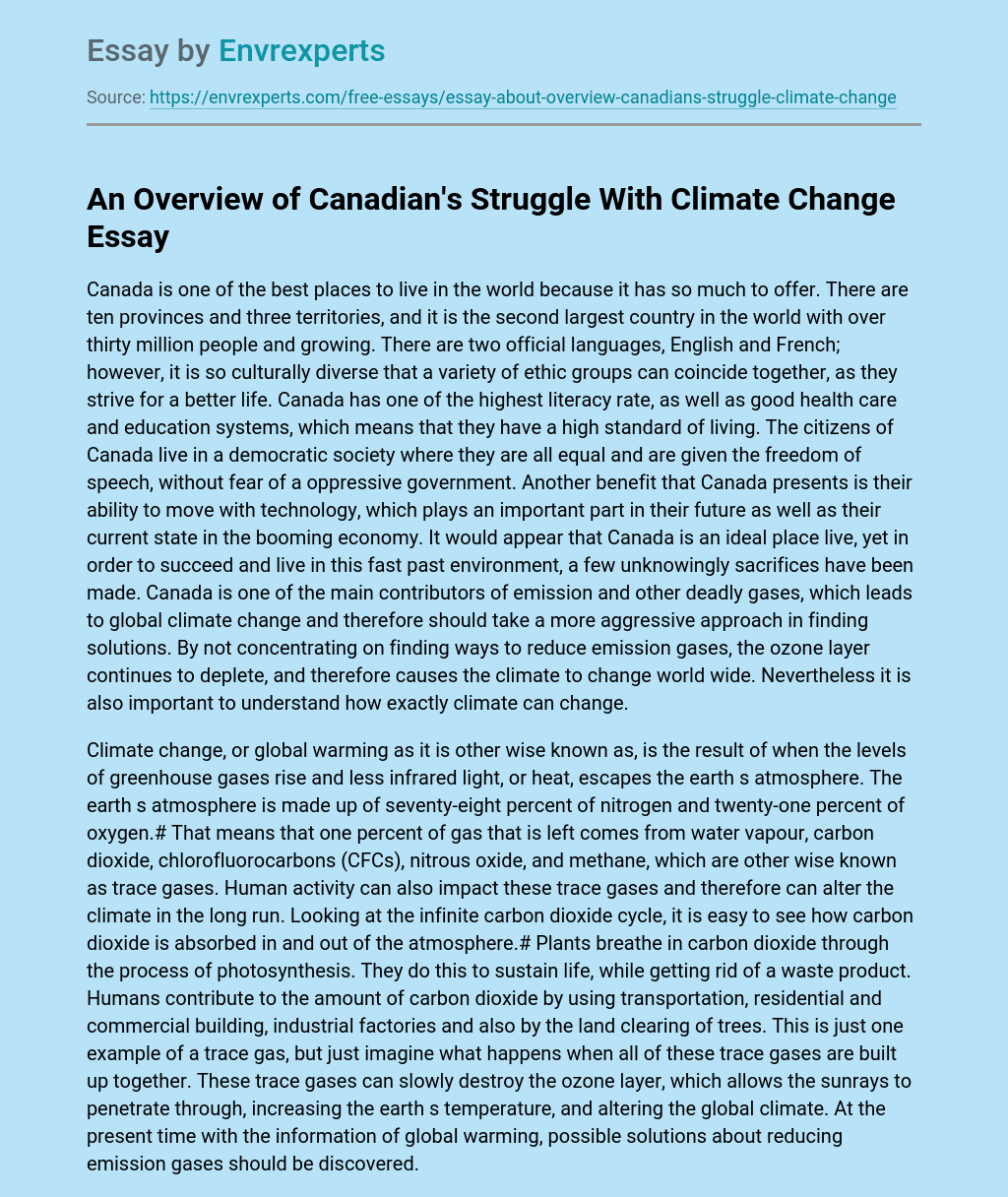