An Overview of the Impact of Water Pollution

Don’t waste time
Get a verified writer to help you with An Overview of the Impact of Water Pollution
Hire writer
$35.80 for a 2-page paper

As a result, the waste is washed into water bodies where it pollutes the water. Also, water pollution in the urban centers results from industrial farming where farmers use chemicals as they strive to boost yields to meet the growing demand for food supplies (EPA, 2017). When chemicals are washed into rivers, lakes and dams, they contaminate water making it unsafe for human consumption.

Deforestation and agriculture are also factors linked to water pollution as an environmental issue.

Clearing forests to get timber can lead to water pollution by encouraging soil erosion. Soils that do not have the protective cover provided by trees are prone to erosion during rains. Soil erosion makes water murky and unsafe for people and aquatic life (Chaudhry and Malik, 2017). Also, efforts involved in loosening soil as land is prepared for farming encourage water pollution that results from soil erosion. Fertilizers that are used in agricultural fields to boost yields cause water pollution when they are carried into water bodies by the rainwater.

Underground water also becomes vulnerable to pollution when chemicals such as herbicides and pesticides are used in farming.

Water pollution affects aquatic animals in many ways regardless of its severity. For instance, soiled water can lead to the death of aquatic animals such as fish as it clogs their gills (Chaudhry and Malik, 2017). Also, water pollution affects aquatic life by reducing the oxygen levels in the habitats of such animals. Water that is rich in farm chemicals is vulnerable to eutrophication that makes it readily soluble in compounds such as phosphate (Chaudhry and Malik, 2017). When water dissolves such compounds, it loses a considerable amount of oxygen, and that endangers the life of the aquatic animals. According to Chaudhry and Malik (2017), nitrogen compounds that are used to make fertilizers lead to dissolved oxygen deficiency since they are highly soluble in water and that can cause death of the aquatic animals. The challenge facing the efforts to address eutrophication that results from the use of nitrogen compounds in farming is that the chemicals have high leaching rate such that they pollute even the underground water. Interestingly, some areas may have high nitrogen and phosphate compounds on the soil surface and that are washed into water bodies killing the aquatic animals without the knowledge of the authorities. For instance, in its report, EPA (2017) found that about twenty percent of the country’s lakes have nitrogen and phosphorous compounds that might have been washed from different areas without detection.

Water pollution also leads to bacteria and algae growth that affects aquatic animals. Dirty water is vulnerable to algae and bacteria growth that have been associated with high deaths of aquatic animals. Eutrophic water provides a suitable environment for the algae growth (Chaudhry and Malik, 2017). Algae tend to compete with fish and other aquatic animals for nutrients and oxygen. Continuous growth of algae can deplete water of its nutrients and lead to the death of the fish and plants in water bodies. Besides, algae can clog the gills of fish and blocks them from breathing thereby causing death. Mammals and birds are also at risk of water pollution such as the one that affected the US coastline in 2010 (EPA, 2017). The occurrence led to the death of mammals and birds as they ingested oil from water bodies.

People and governments are also affected by water pollution. For instance, taking polluted water causes deadly diseases including cancer (EPA, 2017). The economic activities of people such as fishermen also suffer greatly as a result of death of aquatic animals after water pollution. Water pollution disrupts the food chain in that it can cause diseases and deaths across species. The government has to take responsibility and clean the environment after water pollution and that means a financial burden on its institutions.

Water pollution and its impacts have financial implications to the government and other agencies that deal with the provision of the commodity. For instance, the 2016 water pollution in Michigan triggered financial costs on the part of the government and water agencies. The Environmental Protection Agency estimated that cleaning up the water sources and piping system could cost over $200 million (EPA, 2017). Also, the exercise could take long to complete and that shows the possibility of additional costs in the course of the cleanup exercise. The death of aquatic animals has financial implications on people that rely on seafood for income. The 2010 pollution in the US caused millions of deaths of fish and other aquatic animals. The deaths left financial impacts on the people whose income come from the fishing industry.  Besides, water pollution causes diseases that lead to financial expenses on governments and individuals in the form of buying drugs and paying for the medical care.

Water pollution has an environmental impact of disrupting the ecosystem. For instance, the 2010 oil spillage disrupted the ecosystem in that it killed the aquatic life and the organisms that rely on aquatic animals for survival. Also, murky water can cause slow growth and even death of trees. The overall impact of destruction and disruption and destruction of ecosystems is health complications and starvation of humans as they rely on the ecosystem to get food and water (Chaudhry and Malik, 2017). The presence of algae in water, for instance, affects the food chain in that it kills fish and introduces other organisms in water bodies. The reduction of the number of fish affects the food supply to communities that rely on fishing for food.

Concerning social impacts, water pollution influences people to change their eating habits. For instance, communities that rely on fish as staple food might be forced to change their lifestyles when fish dies as a result of water pollution. Lifestyle diseases such as cancer and that result from taking polluted water make the victims change their social lives (Chaudhry and Malik, 2017). Contaminated water is not suitable for swimming and that affects the income from the tourism sector and the social interactions that take place at the beaches.

Regarding health impacts, taking polluted water has been associated with many diseases. For instance, pollutants such as lead cause skin diseases and problems in the nervous system. Carbonates and organophosphates that are present in pesticides cause cancer and the failure of the nervous system to people that take polluted water (Chsudhry and Malik, 2017). Fluorides cause tooth decay and can damage the spinal cord. The residents of Flint in Michigan, for instance, portrayed signs of cancer after they took polluted water (EPA, 2017). The deadly diseases that result from water pollution have been associated with many deaths across the world as an indication of the severity of health impacts of water pollution.

An Overview of the Impact of Water Pollution. (2021, Oct 31). Retrieved from http://envrexperts.com/free-essays/essay-about-overview-impact-water-pollution 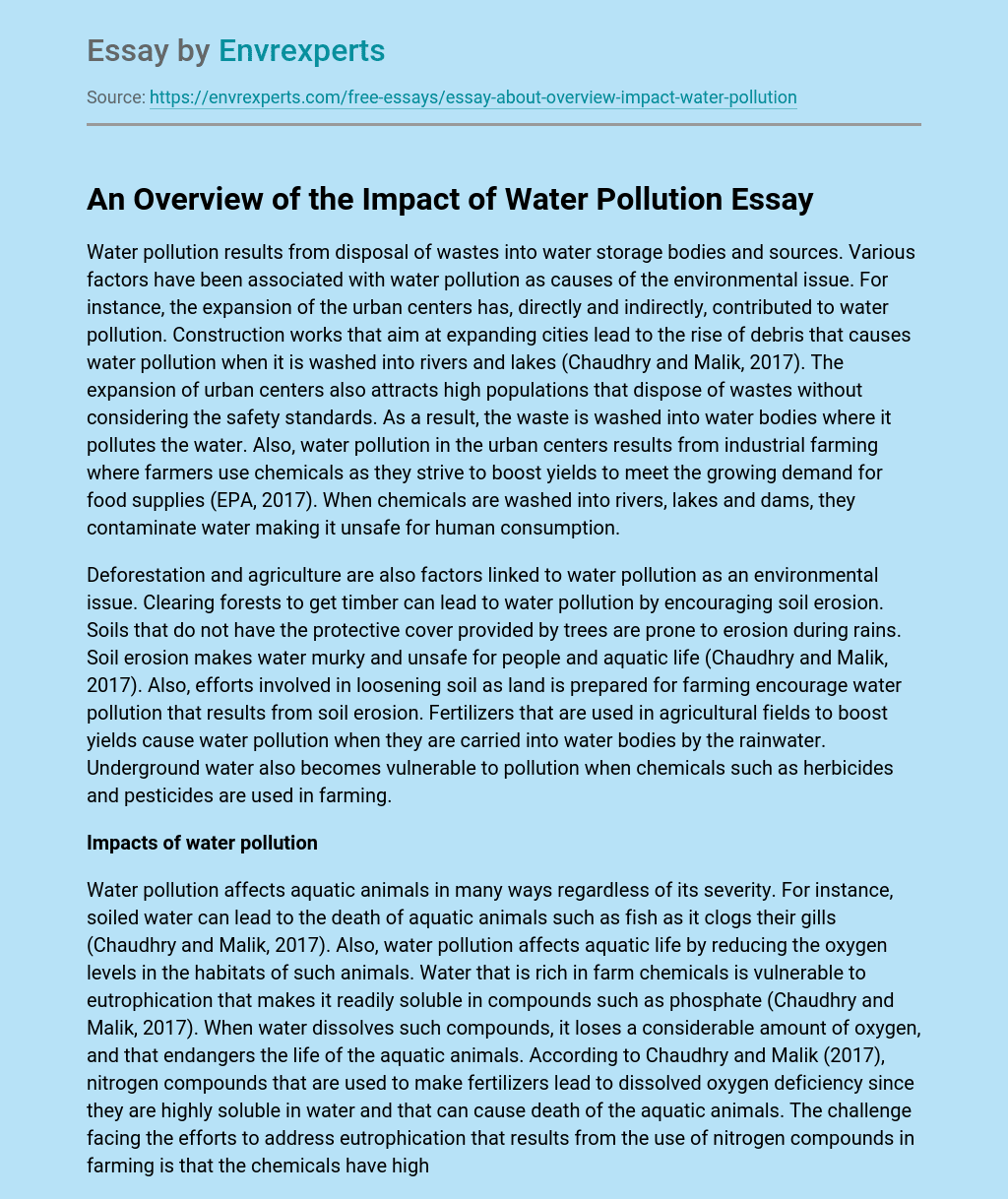